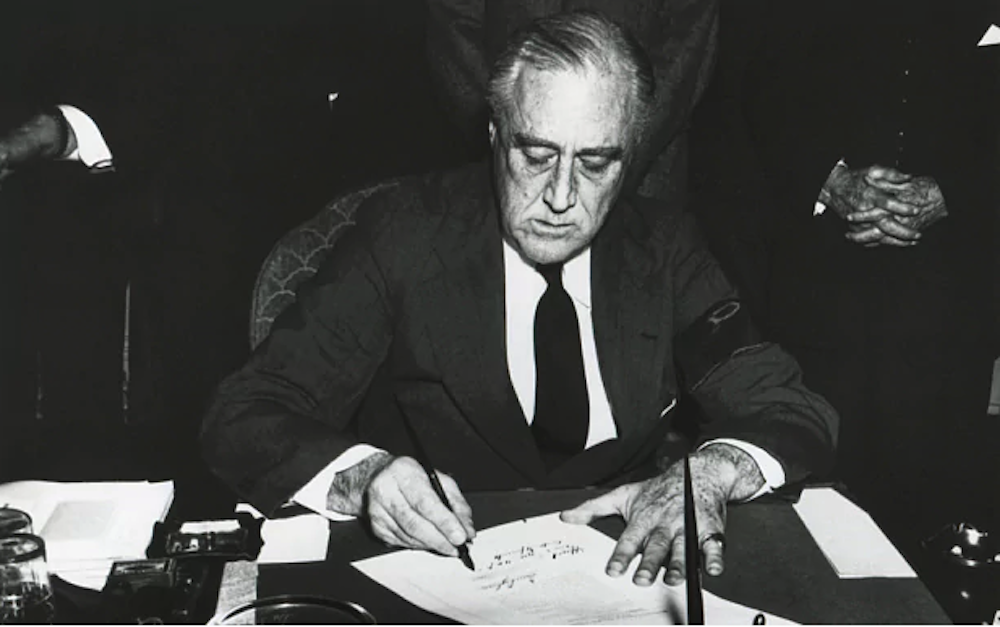 President Franklin D. Roosevelt signing the declaration of war against Japan, Dec. 8, 1941. Courtesy of the National Archives and Records Administration.

In recent months, president-elect Donald Trump has said he is considering setting up a registry to track Muslim Americans and foil jihadist plots from being hatched in the United States. This registry, he and his aides have claimed, is grounded in precedent: Franklin Roosevelt’s administration detained approximately 120,000 Japanese nationals and Japanese Americans in response to Japan’s surprise attack on Pearl Harbor.

Coincidentally, this February 19 marks the 75th anniversary of FDR’s Executive Order 9066 setting up the camps. The Franklin D. Roosevelt Library in upstate New York is devoting an entire exhibit to FDR’s internment decision and its impact on the lives of internees for the first time in the library’s illustrious history.

The exhibit, “Images of Internment: The Incarceration of Japanese Americans In World War II,” will be ready for public viewing February 19, and will run through Dec. 31, 2017. In the meantime, it is worth reflecting on President Roosevelt’s role in and his reasons for setting up the internment camps. Trump, after all, described Roosevelt as a revered leader who was nonetheless responsible for setting up the internment camps. The then-presidential candidate suggested that if one of America’s greatest presidents could take such a step to defend lives, then Trump reasonably could crack down on Muslim Americans for the sake of security if he were to win the White House.

The internment decision represents one of the great paradoxes of FDR’s three-plus terms as president. Roosevelt was not just an architect of the New Deal but also a champion of human rights and individual liberties here at home and around the world as the crisis of World War II encroached on the United States.

Faced with the growing power of fascist militarism, Roosevelt declared in his 1941 Four Freedoms address that “the mighty action that we are calling for cannot be based on a disregard of all the things worth fighting for.” Indeed, he then cited “the preservation of civil liberties for all” as one of these fundamental democratic values that was worthy of national sacrifice.

The puzzle of his presidency is how a man so responsible for defending freedom against the totalitarian menace—whose wartime addresses stirred millions of people to defend the cause of liberty—could simultaneously authorize and implement one of the greatest civil liberties abuses in American history.

In the wake of the attack on Pearl Harbor, the political pressures on Roosevelt to take drastic action against Japanese Americans on the West Coast metastasized. Popular fears of imminent air raids, widespread espionage and land invasion combined with entrenched anti-Japanese racism, especially in California, Oregon, and Washington state, into a combustible mix in the uncertainty that defined the days following the bombing of Pearl Harbor.

Railing against any American officials who had the temerity to defend Japanese Americans as loyal citizens, the Los Angeles Times denounced all people of Japanese origin as “snakes” who posed imminent dangers to communities on the Pacific coast. Anti-Japanese voices grew louder as concerns soared that cities—Los Angeles, San Francisco, Seattle—would come under enemy attack. Los Angeles Mayor Fletcher Bowron warned residents that, “Right here in our own city are those who may spring to action at an appointed time in accordance with a prearranged plan wherein each of our little Japanese friends will know his part in the event of any possible attempted invasion or air raid … We cannot run the risk of another Pearl Harbor episode in Southern California.”

The puzzle of FDR’s presidency is how a man so responsible for defending freedom against the totalitarian menace could simultaneously authorize and implement one of the greatest civil liberties abuses in American history.

A group of Army officers, fearing that invasion was imminent and under pressure from nativists in the Western United States, pressed the White House to remove and incarcerate Japanese nationals and Japanese Americans on the West Coast. Roosevelt was kept abreast of the fast-moving debate about the fate of Japanese Americans on the West Coast, and the voices in support of internment proved far louder and politically and militarily more potent than the arguments made by interment’s opponents.

A member of the Senate Committee on Military Affairs, Harley Kilgore (D-WV), sent Roosevelt letters from Americans protesting the ongoing presence of Japanese people within the United States as a grave threat. “I am enclosing herewith a few samples of the types of protests which I am receiving from persons very distant from the Pacific Coast with reference to the dangers of Japanese and other inhabitants of that vicinity,” Kilgore wrote the president. “It is my sincere belief that the Pacific coast should be declared a military area which will give authority to put [residents] … under military law, permitting their removal, regardless of their citizenship rights, to internal and less dangerous areas.”

The most vigorous dissent to incarcerating Japanese Americans came from Attorney General Francis Biddle and Assistant to the Attorney General, James H. Rowe, Jr. But even as they argued admirably against evacuation and incarceration, the Justice Department’s leaders conveyed to the president some sense of the popular racism, war hysteria, and economic motivations that would ultimately overwhelm the debate and set in motion FDR’s executive order. Biddle wrote Roosevelt:

“A great many of the West Coast people distrust the Japanese, various special interests would welcome their removal from good farm land and the elimination of their competition, some of the local California radio and press have demanded evacuation, the West Coast congressional delegation are asking the same thing and finally Walter Lippman and Westbrook Pegler recently have taken up the evacuation cry on the ground that attack on the West Coast and widespread sabotage is imminent.”

When Biddle and other Justice Department officials were assured by the Army that the military and not Justice would be responsible for implementing and running the camps, they withdrew their opposition to Roosevelt’s executive order. That order, numbered 9066 and signed on February 19, 1942, did not explicitly mention the Japanese, but there was no question that it targeted people of Japanese ancestry for removal rather than people of German and Italian origins.

The decision was hardly motivated by legitimate threats to the national security of the United States. Almost all historians have concluded that there was no evidence in the early 1940s—and that no evidence has emerged in the seven-plus decades since—showing that Japanese nationals and Japanese Americans were acting as spies or that they were part of a larger plot aiding the Emperor’s war effort. The notion that national security considerations justified the camps is simply contradicted by the voluminous historical evidence to the contrary..

“There is no evidence that [the Japanese government] had any success” recruiting spies in the United States to advance its war aims, historian Greg Robinson, author of By Order of the President: FDR and the Internment of Japanese Americans, has pointed out. “The American occupation authorities in Japan after the war who studied captured Japanese documents found no evidence of any giant spy rings among American citizens of Japanese ancestry.”

Roosevelt, a product of his times, regarded the Japanese with the racist suspicion shared by countless of his fellow Americans. A close student of public opinion, and attuned to the military, political, and popular pressures to incarcerate Japanese Americans and suspend their rights as citizens, he issued the executive order without much apparent forethought or agonizing about the fraught moral questions and human costs of his action. Roosevelt subscribed to decades of anti-Japanese racism that pervaded early 20th century American culture. Just as the nation’s 19th century political leaders could speak eloquently for democracy and sing the praises of individual freedom while also defending the institution of slavery, Roosevelt gave hope to the world’s victims of fascist militarism and rallied millions of Americans to defend democracy while simultaneously authorizing the complete suspension of rights of an entire group of people based on their race. One historian has rightly called the internment camps “the most tragic act of his administration.”

During the 1980s, a committee established by the U.S. Congress to investigate the history of the internment camps concluded that they amounted to “a grave injustice” born out of “racial prejudice, war hysteria, and the failure of political leadership.” The most glaring abdication was the failure of Franklin Roosevelt to defend the rights and liberties of tens of thousands of his fellow citizens as he was pulled along by the tides of hysteria and racism 75 years ago this February.