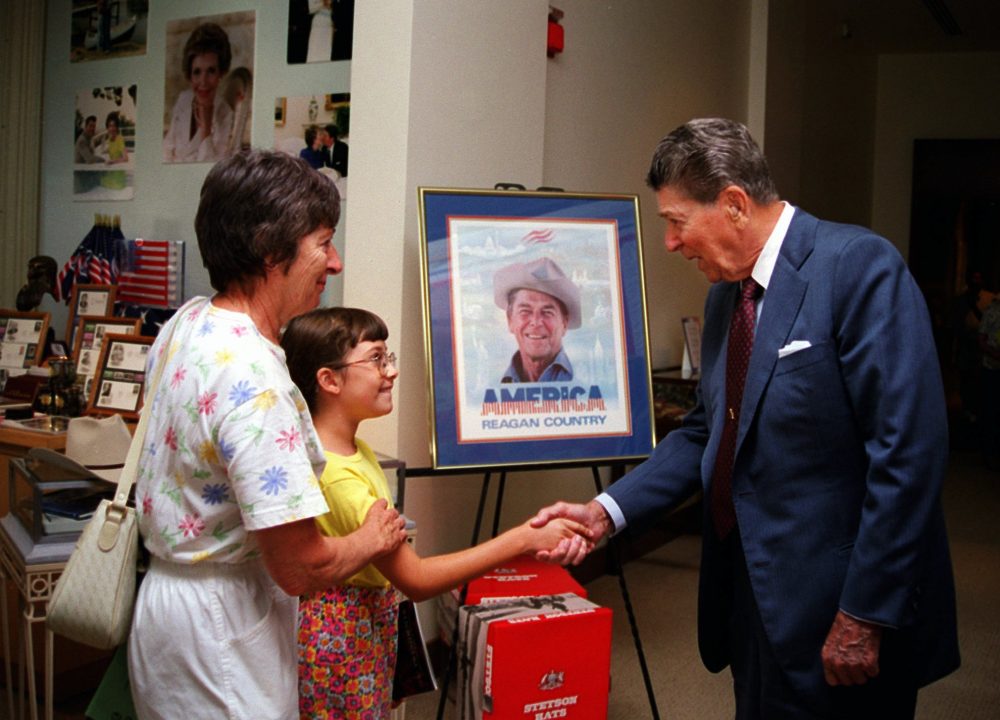 Former President Ronald Reagan, during a visit to the Ronald Reagan Presidential Library and Museum, shakes hands with 9-year-old Janine Hicks of San Diego, who was touring the museum with her grandmother, Lily Visniski of Thousand Oaks, in 1997. Photo by Mike Guastella/Associated Press.

California is already on the defensive in its battle with Donald Trump. Our state needs an offense—now.

Trump’s first four weeks in office have made clear that hopes of California working with this president—in areas like infrastructure—are pure fantasy. Trump is already engaged in non-stop attacks against our state, as if all of California were a political opponent. His strategy is not merely to punish California; he wants to rob our state of its legitimacy within the American polity.

And so the president of the United States has repeatedly and falsely claimed that California’s elections are fraudulent exercises that enable millions of illegal votes. He’s frequently accused our biggest cities of endangering our country by failing to assist federal goons with deportations. He has called the whole state “out of control” and threatened to “defund” our universities and unspecified state programs.

Such attacks are so potentially powerful (since they play into American resentments against our special state) and damaging (since California is the world’s sixth-largest economy and a vital model of diverse peoples prospering together) that we need to be fighting Trump much harder and more directly.

There are two ways California must go on offense against Trump. First comes the fist: Californians must aggressively question Trump’s legitimacy as president as often as possible. Second comes the outstretched hand: We must bolster our state’s own legitimacy by reaching out to the rest of America and reaffirming just how proud we are to be a part of this country.

Right now, our response to Trump is led by cautious souls: lawyers, politicians, and lawyer-politicians who focus on legislation and litigation. But this fight isn’t about laws. Trump must be fought on his turf: politics, culture, and media.

Our state needs a war room. Any outrageous allegation Trump makes against us should be answered with greater outrage. If Trump wants to make up claims of fraud in our elections, we should target his own frauds—from questionable business dealings to unpaid taxes to the confidence game that was Trump University. And we should pressure our law enforcement officials to investigate and publicize any questionable moves by his family’s ongoing business interests if they have any connection to California at all.

When Trump alleges again that California is “out of control,” California should press the president on who controls him. Let’s ask him which of the powers behind his throne we should be talking to when we have a complaint about him. Should we be discussing energy policy with your bosses at the Kremlin, Mr. President? Or with the Goldman Sachs executive committee? Or with the white supremacist groups backing you?

And when Trump threatens the funds for state programs, Californians should shout that Trump is trying to bankrupt the whole country. “If Mr. Trump gets his way, California won’t be the only state short of funds,” we should say. “His trade and immigration policies will destroy the economy, and his reckless spending and tax cuts will create unsustainable federal debt.” The strategy: Take the heat off California and put it back on Trump.

Indeed, the most powerful line of attack against this president is to question his patriotism. Trump has put Americanism at the heart of his political story—he’s an unapologetic nationalist, vowing to make America great again. But he’s actually vulnerable on nationalist grounds. He constantly slanders the country—lying about the murder rate, equating America’s leaders with the murderous autocrat Vladimir Putin, tweeting false insults against important American companies and businesses. Californians should point out the truth: that Trump’s attacks on this most American of states are really an attack against our entire country.

We don’t believe Trump is legitimate, but we respect Republicans and Trump voters. To make this sell, California Democrats should hold their noses and deploy the words of California president—and “great communicator”—Ronald Reagan as weapons against the current president.

To emphasize Trump’s lack of patriotism, we Californians must put our American patriotism on full throttle. That starts with killing off the traitorous (and Russian-affiliated) #Calexit movement. Instead, while Trump denigrates America on Twitter, California and its leaders should be looking for opportunities to praise and assist other states.

Our governor and other elected state leaders should be on the road, initiating high-profile meetings with their counterparts across the country, looking for areas of cooperation. When another state faces an emergency or natural disaster, California should be the first to send help. And whenever another state celebrates a great triumph—a game changing new business in North Carolina, a new university campus in Michigan—our leaders should show up and congratulate them in person. (Once there, we can take shots at Trump. A talking point: “In California we’re learning so much from your state’s example, which is important at this time, when Washington D.C. is so consumed with negative attacks.”)

Californians must focus on Trump, not his supporters. We don’t believe Trump is legitimate, but we respect Republicans and Trump voters. To make this sell, California Democrats should hold their noses and deploy the words of California president—and “great communicator”—Ronald Reagan as weapons against the current president.

The Gipper left us bon mots for every occasion.

To explain our fight with Trump: “When you can’t make them see the light, make them feel the heat.”

To build solidarity with other states: “You and I have a rendezvous with destiny. We will preserve for our children this, the last best hope of man on earth, or we will sentence them to take the first step into a thousand years of darkness.”

When we engage in protests: “No arsenal, or no weapon in the arsenals of the world, is so formidable as the will and moral courage of free men and women.”

And as we counter Trump’s war against refugees and immigrants, we should invoke the 40th president as often as possible. “I, in my own mind, have always thought of America as a place in the divine scheme of things that was set aside as a promised land … any person with the courage, with the desire to tear up their roots, to strive for freedom, to attempt and dare to live in a strange and foreign place, to travel halfway across the world was welcome here.”

In that vein, California should shift its energies from opposing Trump’s Wall—that’s defense after all—and go on offense by demanding the removal of the existing wall along our state’s border with Mexico. The fact that there’s already a wall exposes the blatant wastefulness and redundancy of Trump’s proposed boondoggle—and might be news to Americans elsewhere. And we could point out that the current barrier doesn’t keep out the undocumented (airports are the real border gates), and is little more than an expensive eyesore that inconveniences tourists, businesses, and residents of the San Diego-Tijuana and Calexico-Mexicali regions. “Mr. Trump, tear down this wall!” we could thunder, in another Reagan echo.

Opposing the wall would be welcome in Mexico, and should be part of a California effort to develop our own foreign policy with allies Trump is offending. Governor Brown should press for summits with Mexico’s president and Canada’s prime minister, and seek high-profile meetings with other Trump-attacked U.S. allies from Australia to Germany. The state could then sign environmental, trade, tourism, or educational exchange deals that benefit California and put Trump on the spot. Why doesn’t the president make deals like that?

Sun Tzu advised, “If your opponent is of choleric temper, seek to irritate him.” The dual offensive strategy outlined here—reaching out to our fellow U.S. states while attacking Trump’s legitimacy as president—would both irritate and isolate him. Such an offense is the best way to weaken Trump—and protect both our state and our country.