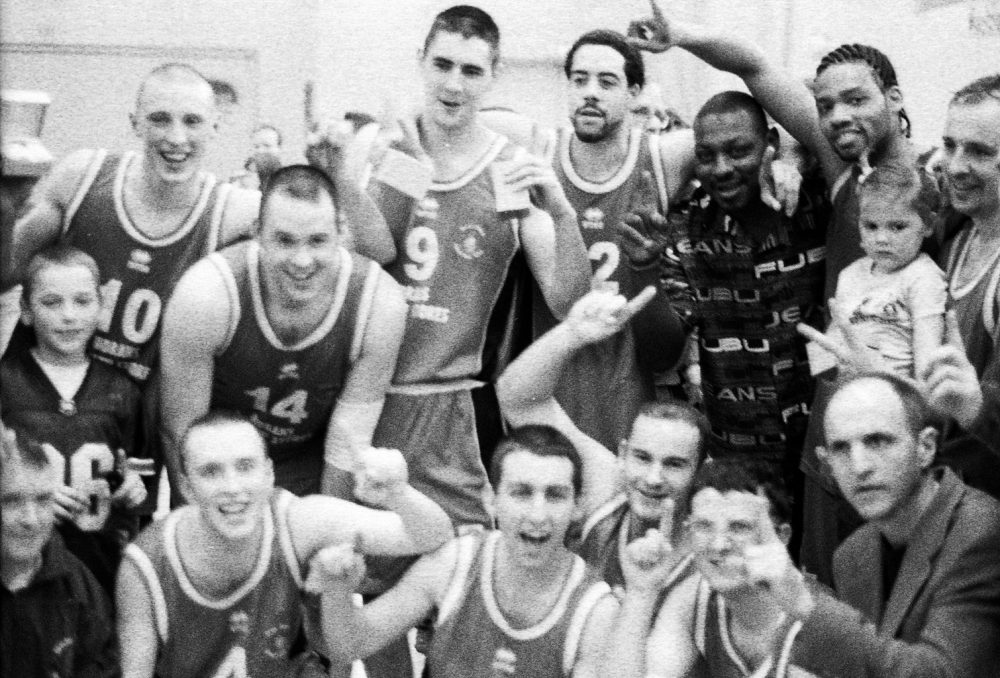 Rus Bradburd with the Tralee Tigers after victory over Belfast for the 2004 Irish Professional Basketball title. Photo courtesy of Michael Gaylord James.

It was something I said a lot that year, in the midst of a losing streak that would culminate in a dead last place finish. This was in the Irish Super League—perhaps the lowest level of pro basketball in the world—and I was the coach of the Tralee Tigers.

My team gathered around me on the bench, and I wondered for an instant if I should use the time out for hugs instead of hollering, to make sure nobody was about to burst into tears. Time outs require a coach to adopt various stances: Taskmaster? Cheerleader? Tactician? A combination? A coach has to read the situation. Soon the players read the coach: Does he know what he’s talking about?

During this game, the time out might have seemed hopeless. With less than two minutes remaining, we were down by 22 points. It was an insurmountable lead, which was why a clump of our 300 fans had drifted toward the exit.

Then I had an idea.

“Let’s see if we can cut the lead to 15 by the time the buzzer sounds,” I said. “Let’s go to our trapping man-to-man. If we get a steal, race it down for a quick shot. Otherwise, Kieran, you … ” 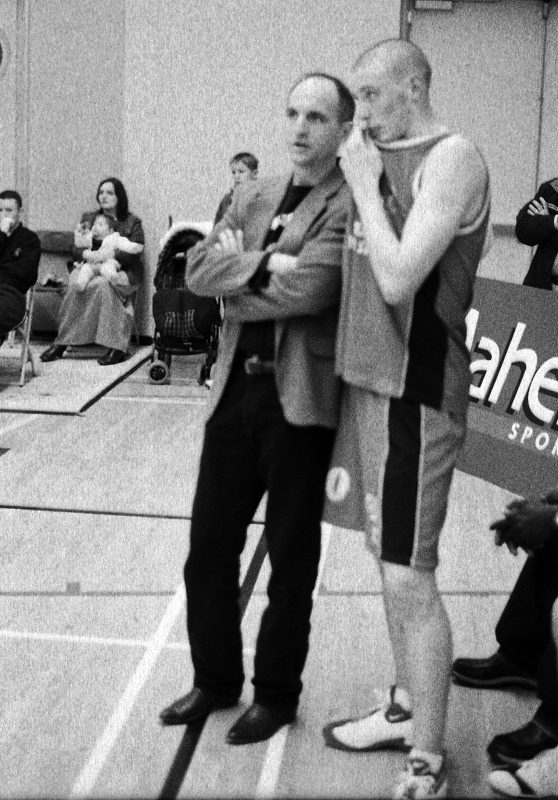 Rus Bradburd with Kieran Donaghy of the Tralee Tigers during the 2004 championship game. Photo courtesy of Michael Gaylord James.

I told him I knew that. I just wanted to use the last two minutes to get better, accomplish something under game pressure. And, of course, mostly to prove that I was not quitting—and, by extension, neither could they.

It was as if I had pointed to an entrance they did not know existed, and I could see from the looks on their faces that they were willing to try. When you’re getting crushed, something has to matter more than the scoreboard. Naturally, my job was to lead us to victory, but before we could aspire to that, we would need to take baby steps in the right direction.

Every basketball game has several micro-games going on within it. While style of play, offensive patterns, and defensive strategies are worked out during practice and away from fans, the games can be the litmus test where a coach establishes his place. If you think “X & O” strategies are complicated, toss in the psychological makeup of a dozen young men. And the team makes a collective, subconscious decision during each pre-game talk, halftime meeting, and time out: Is this coach legit?

My “lightbulb” moment in Ireland turned out to be pivotal for the Tralee Tigers. The time out strategy took hold for the rest of the season, became a message of resistance in what could have been a month of despair: Their gallant new coach would not go down without a fight no matter how bad we were, so the Tralee Tigers should not either. It was a time out that I know, in retrospect, established me, their American-bred coach, as authentic.

Of course, I realize that continuing to coach my Irish team even when we were doomed might have impressed the lads for a limited number of games. The subsequent happy ending (not in that game, but the following season) is another kind of story, and for now I want to hover around that dismal 2002-2003 season.

I could have lost legitimacy, not just by losing games—a grueling and torturous way to sink—but in any number of ways. Like by saying or doing something stupid. There’s a grace period for a new coach when any crazy idea might appear feasible. As the season goes on, the more you win, the more you can get away with. Of course the converse is true—losing games can accelerate the loss of legitimacy.

In Ireland, I had an initial advantage: There was a natural bias in favor of coaches from the States because that’s where the best players and teams came from until globalization evened things out. When things are going well with the Irish, everyone is on board. Once they buy in, they will fight through bloodied noses, knocked-out teeth, or insurmountable odds. Lose a few games—or 10 in a row, as I did—and you might see revolts, mysterious dentist appointments, cousins’ Christenings at St. John’s Cathedral, or flu symptoms.

Every basketball game has several micro-games going on within it. The team makes a collective, subconscious decision each pre-game talk, halftime meeting, and time out: Is this coach legit?

We could have been caught up in a downward spiral, but the Irish love a lost cause—read up on their history of struggling for centuries to overthrow the nearby superpower. My willingness to go down fighting struck a mysterious chord with the lads during that time out.

I had been a college coach for fourteen seasons before I showed up in Ireland, burned-out and disillusioned. My college teams could have beaten anyone in the Irish Super League by 40 points. That mattered little to the Irish. Any time a coach switches levels, his legitimacy needs to be reestablished.

I have a friend working in the NBA who says their players are suspicious of any coach who did not play in “The League.” They presume a coach with a college pedigree is illegitimate, and that’s a major hurdle for a leader. This despite the fact that the most important determinant in who will succeed as a player in the NBA is genetics, first and foremost. Nearly every developing player practices hard, but only a few will be tall enough, quick enough, and have the requisite vision, anticipation, reflexes, or hand/eye coordination.

Good players can practically smell a coach who isn’t legit. Does he wilt under pressure? Rely on the wrong players? Underestimate the guy on the bench everyone knows ought to be playing? Worst of all, does he have bad luck? Unlike college, where the coach is being compensated infinitely more than the players, in the pros—even in Ireland—the best players make more than the coach, and everyone knows it. In college, a coach can seem legit because of his salary.

And there’s this weird phenomenon at the college level: The coach gets older; the players don’t. I recall as an assistant coach at University of Texas El Paso in the 1980s, complaining about how our players would repeat the same mistakes, either academically or on the court. “Aren’t they ever going to learn?” I whined. This may have been the pivotal moment that would culminate in that fateful time out in Ireland a decade later.

An older coach on the staff pointed out to me that no, they were never going to learn, or were at least destined to repeat the same mistakes that guys had been making for years. “The players are always going to be 19 or 20,” he said. “You keep getting older and smarter, but the players will always be the same age.” No coach except maybe Phil Jackson would recognize the “beginner’s mind” element to this anecdote, but I think that’s precisely what was going on. A coach had better stay fresh and be able to relate to his team. Each team, season, and player is a fresh start. 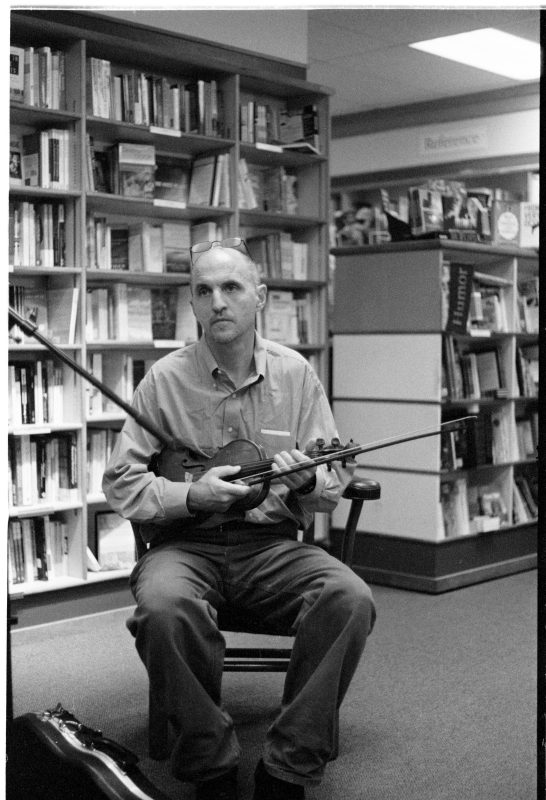 How can a coach pull it all together?

In my case, I needed a window into Irish culture. Like any arrogant American in charge, I thought I knew better than the Irish players about everything. I did not. That time out was an enlightenment kind of moment. If I was going to get through to the players, communicate, and teach, yes, I had to show I would never quit. But I also had to imagine their mindset.

What served as my temporary passport into the peculiar Irish culture? How did I learn what it meant to be Irish student of the American game?

A burned-out American coach, I needed a sort of healthy sedative to take my focus off basketball. Oddly, it was learning the Irish fiddle that allowed me to understand my team’s mindset. Not that the Tralee Tigers cared a bit about the jigs and reels—not when the sports bars had giant TV screens. Rather, I mean that at 10 p.m. when the tunes tipped off, I became the new guy, a beginner, a student. Trying to get a grip on the Irish tradition—and gain genuine legitimacy at the weekly late-night music sessions in pubs—helped me to empathize with the Irish players, to grasp their growth process when I taught the “American” tradition of basketball.

The only way to be seen as legit in the Irish trad music sessions is through humility and practice. You respect the ancient tradition, and either you can play your instrument or you cannot. Yet the road can widen or narrow: Even in the music circle, you can bankrupt what you’ve earned by being arrogant, annoying, or the musical equivalent of a “ball hog”—too loud, or somebody who does not want to share the spotlight.

This is what I’ve come to think about being “legit”: Whether it’s teaching helpside defense or learning the lilt and lift of traditional Irish music, come to the table with a beginner’s mindset. That’s the first step, and it’s counterintuitive, right? To become an expert, first you have to know nothing. In my experience, this is what enables a coach to relate to his team.

On the surface, things did not get better after that time out—it would not be until the next season that anyone would notice any tangible results. Yet, I still think of those 90 seconds as a pivotal moment.

I haven’t thought about coaching basketball for a long time. I’m retired from the game, and now I have an 11-year-old daughter. She’s fine for now—meaning we’re fine. She mostly listens well, gets good grades, and we laugh out loud at the same time during her favorite nightly show. But will I be able to use my time outs to communicate with her after she gets to junior high?

I wonder. For reals, as the teenagers say these days.