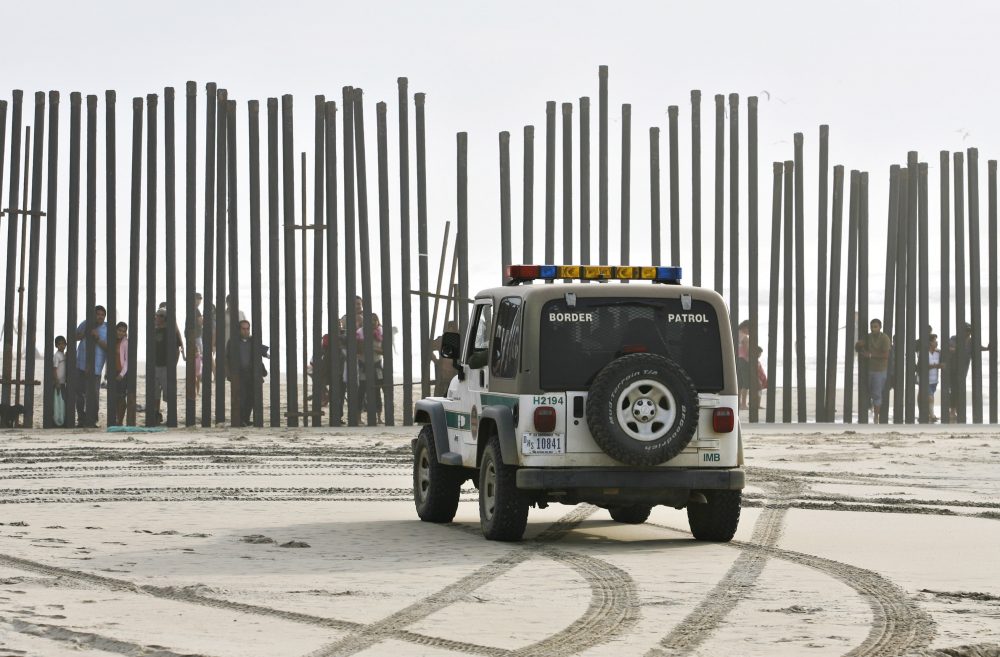 A U.S. Border Patrol vehicle sits parked in front of a crowd of people peering through the U.S.-Mexico border fence at Border Field State Park in San Diego. Border Patrol agents often enter the profession for economic reasons and the relatively good pay, but face dangerous, uncertain, and stressful 24/7 on-call work in remote locations. Many agents also have deep immigrant ties, which can lead to conflicted feelings about their work. Photo by Denis Poroy/Associated Press.

“I want one day without a CNN alert that doesn’t scare the hell out of me,” quipped Cecily Strong in a recent SNL skit.

Many of us are struggling to manage our emotions since the inauguration, with collective exhaustion mounting. Sudden swings in policy, ranging from immigration to environmental regulation, have caused great emotional turmoil for many Americans watching from the sidelines, and unimaginable hardship for those under imminent threat of losing their homes and jobs, or having family members deported. The suffering of the intended targets of such bureaucratic measures is palpable. The cascading harmful effects on the overburdened government workers now tasked with implementing these policies—edicts that they may feel uneasy about, or outright opposed to—have received less attention.

Federal workers stand on the frontlines of dizzying shake-ups in every branch of government and face the additional stress of looming budget cuts, hiring freezes, and increasing workloads. Many career civil servants find themselves now working for departments headed by leaders with little to no direct experience serving these agencies, such as HUD secretary Ben Carson and Secretary of Education Betsy DeVos. In some cases, leaders fundamentally oppose the agency’s mission, as with Environmental Protection Agency head Scott Pruitt, who as Oklahoma attorney general attempted to block EPA regulations in 14 lawsuits and has rejected scientific evidence of human contribution to climate change, contradicting the EPA’s own website.

Continued upheaval of the type we have experienced in the last few months has the potential to drastically alter federal workplaces, increasing emotional burdens and stress on workers and their families. White House press secretary Sean Spicer offered his own solution to this predicament after a dissent memo made the rounds at the State Department in response to January’s travel ban: “These career bureaucrats have a problem with it? They should either get with the program or they can go.”

Federal employees often work through political changes in administrations, but dramatic shifts in policy can spur widespread resistance and large-scale departures, as lifelong civil servants experience ideological whiplash. A recent study from the National Bureau of Economic Research found significant numbers of departures in the year after elections, especially at senior executive levels when a conflict existed between the agency’s mission and the incoming administration. Another survey of 3,500 federal managers conducted during the Obama administration revealed a workforce already under stress. Managers cited difficulties recruiting and retaining the best employees as a major hurdle to fulfilling their agencies’ core missions. As one of the study’s authors, Vanderbilt professor of political science David E. Lewis, cautioned, problems attracting human capital have larger long-term ramifications. “If government workers fail, the president fails,” he said.

The exit of senior civil servants results in a profound loss of expertise, as the recent departure of Mustafa Ali, head of the environmental justice program at the EPA, demonstrates. Ali left after a 24-year career at the EPA in advance of deep cuts and the dismantling of the office he had helped found. A small group of employees at the agency have begun using encrypted messaging apps and old-fashioned face-to-face meetings to express their dissent and to organize; federal employees at the State and Labor Departments have started taking similar measures.

The exit of senior civil servants results in a profound loss of expertise, as the recent departure of Mustafa Ali, head of the environmental justice program at the EPA, demonstrates. Ali left after a 24-year career at the EPA in advance of deep cuts and the dismantling of the office he had helped found.

Still, despite turnover, the vast majority of federal workers stay—and research offers clues to the ill effects of this ever-shifting ground on those who remain. Sociologist Arlie Hochschild coined the term “emotional labor” in The Managed Heart, her 1980s study of TWA flight attendants. She defined this type of work as “the management of feeling to create a publicly observable facial and observable display.” Flight attendants received intensive training to smile incessantly and manufacture an upbeat friendliness even when passengers disrespected them. Public servants such as immigration enforcement officers face inverse pressures to project steely authority and an unflappable “poker face.”

Any job requirement to suppress emotions may serve a company’s or a bureaucracy’s goals, but it also ignites a process whereby workers can become estranged from their own feelings, with harmful consequences for workers’ physical and mental health. A raft of studies shows that workers with high public contact and intense pressure to keep their cool, from bus drivers to border patrol agents, face higher stress and greater risk of exhaustion, insomnia, problems at home, divorce, burnout, elevated blood pressure, and suicide.

To cite one relevant current example, the Trump administration’s hyper-aggressive stance on immigration will make the work of immigration enforcement more grueling and potentially unattractive. Border Patrol agents often enter the profession for economic reasons and the relatively good pay, but face dangerous and uncertain 24/7 on-call work in remote locations. Rescuing abandoned children in the desert, and arresting drug smugglers, boosts agents’ self-esteem. But emotionally draining parts of the job, like deporting children and breaking up families, will become the norm rather than the exception under the current crackdown.

Contrary to stereotypes of trigger-happy officers, most immigration agents are ordinary men and women straining to take care of themselves and their families. They want to engage in work that makes them feel good. Many agents also have deep immigrant ties, and about half of all border patrol agents are Latino. Aaron Hockman’s study of Mexican-American Border Patrol agents reveals agents’ deep empathy for migrants and a complex web of feelings tied to emotional labor and identity.

An agent named Tanya spoke of the internal conflicts she faced between her duty to apprehend and the plight of migrants: “I remember talking to one lady and she was just crying and it really hit home to me, it really bothered me because she reminded me a lot of my mom.” Another agent, Felipe, spoke of his challenges enforcing policies he didn’t always agree with: “I’ll guarantee you right now if I was in Mexico, if I was poor, if I had mouths to feed and I didn’t have a job, I would try crossing illegally,” he said. “Situations where you stop the vehicle and maybe it’s a family, and dad out of the whole family is the only one that’s illegal and everyone else is fine, and that’s difficult. Especially when you have the kids crying …”

Emotions give us important feedback about how we feel, and warn of potential danger. They can help signal when something is wrong. Expending energy managing the fear, anger, and uncertainty provoked by the Trump administration’s wide-ranging policy shifts is not a long-term strategy for building a healthy or functioning government or society. Learning to tune out these internal messages hurts everyone, including the growing army of federal workers and their families who will bear the brunt of this emotionally taxing work.