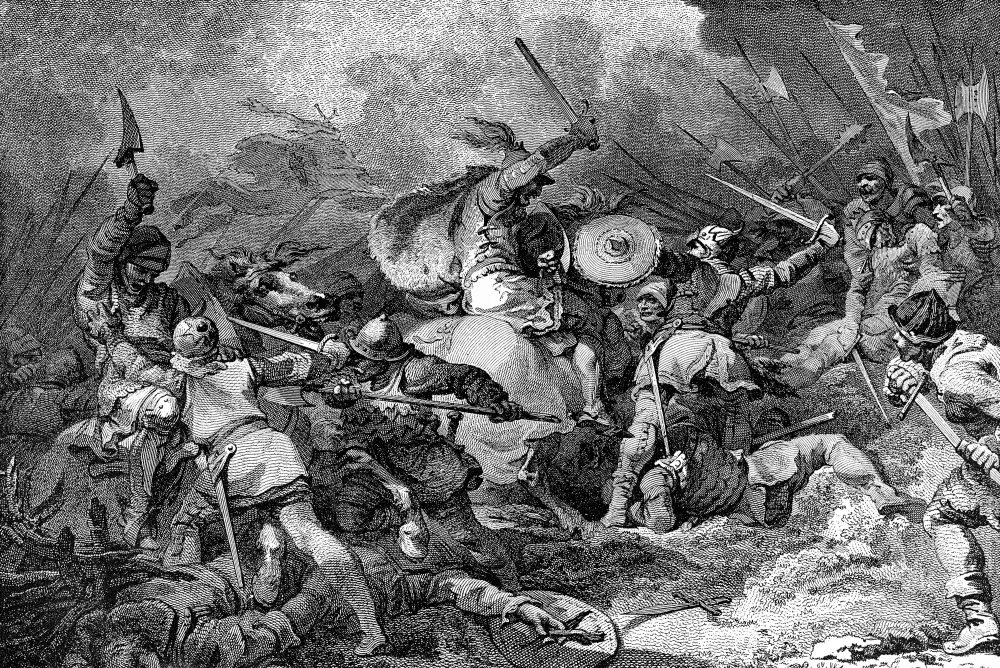 William the Conqueror’s victory over the Saxon King Harold, at the Battle of Hastings in 1066, established a cross-Channel Norman empire and led to a major transformation of society and institutions in medieval England. Image courtesy of Associated Press.

Since the publication of my William the Conqueror in the Yale University Press English Monarchs series in October 2016, I have often been asked how long it took me to write the book. In response, I usually say that it has taken 50 years and three years.

Both numbers are inaccurate, but they contain two essential truths. It was around 50 years ago, as a postgraduate student, that I recognized the great potential of searching for manuscripts in France and started discovering the new or scarcely known charters that have since informed my work and the book. And it was three years ago that I finally felt able to confront the ethical issues involved in writing about a man whose achievements were based on deliberate and often extreme violence.

My ability to make that leap was helped by the realization that everyone writing about William in the 11th and 12th centuries faced the same problem, with the conclusion having to be that William’s life and achievements are ultimately a parable on the eternal moral conundrum of the legitimacy of violence to achieve what its perpetrators believe to be a justifiable end.

All this is so much still with us.

Although its later stages were a massacre, the Battle of Hastings was a hard-fought battle that lasted throughout almost all of the day of October 14, 1066. Its intensity and its remarkable duration show that many people were prepared to fight very hard for William and Harold and that many believed both men had justifiable claims to be king of England.

Why did so many people have sufficient confidence in William to join him in a very risky enterprise?

The answer partly lies in a long-term crisis in England’s history. This crisis was the product, in the long term, of a situation in which rules of succession of the kind we would expect did not exist. The way in which the claims of the senior descendants of the Old English rulers—personified in 1066 by those of the approximately 14-year-old Edgar, usually known as the Ætheling (an Old English word that signifies a prince of royal blood)—were ignored, just as they had apparently been in 1035, 1040, and 1042, says almost all that needs to be said about the politics of the times and the fluidity of succession norms.

The extensive support for Harold, the earl of Wessex and the most powerful man in the kingdom after the king, was a pragmatic response to the crisis. William and the kings of Denmark and Norway all had claims and were expected to invade. The extreme volatility of this situation is important for understanding William’s life and ultimate achievement, with the analysis also needing to take account of the politics of the French kingdom. The crisis took a different form after 1066, but it did not go away.

The surviving English elite’s submission to William at Berkhamsted, and his coronation on Christmas Day 1066 integrated him into a framework of English legitimacy. But this proclaimed continuity does not mean that the history of England, the British Isles, Europe, and indeed of the world, would have been the same if Harold had won at Hastings or if Edgar had been made king. We should never forget that thousands were killed and many more deprived of their livelihoods at and after the Battle of Hastings. The events that followed must be seen in terms of a terrible trauma and the collapse of many certainties—and as a demonstration that it is often harder to make peace than to make war. Memory may also have played a part in all this. England had been conquered 50 years earlier by the Danish King Cnut who had ruled both kingdoms from 1016 to 1035. Awareness of how that process of coming to terms with a conqueror had been managed undoubtedly influenced peacemaking in 1066.

Thousands were killed and many more deprived of their livelihoods at and after the Battle of Hastings. The events that followed must be seen in terms of a terrible trauma and the collapse of many certainties—and as a demonstration that it is often harder to make peace than to make war.

The next four years witnessed a truly exceptional takeover of England’s resources by an elite from Normandy and other regions of northern France. One crucial determinant of events was the absolute requirement that William reward those who had supported him. This is what all medieval rulers were expected to do!

A second was that he guaranteed their security in the midst of continuing resentment, potential rebellion, and the certainty of invasions from Denmark, whose king also had a claim to the English kingdom inherited from the time of Cnut. The result was the dispossession of most of England’s secular and religious elite and their replacement by men and women from France.

Much of this had been done by 1070, with the most notorious aspect thereof being the “Harrying of the North,” William’s destruction of much of Yorkshire in the winter of 1069-70. The scale of the destruction remains a subject of debate and, yes, violence against civilians was a permissible feature of medieval warfare. But William’s ruthlessness was exceptional by his standards and those of others.

Yet the result of the conquest was the establishment of peace in England and a framework of rule that emphasized legality and continuation with the English past. Large new cathedrals were built, with Winchester being a superb example, and a new regime was established, with all integrated into an identity that was proclaimed to be English. At the same time, although retaining distinct identities, Normandy and England became the core of a cross-Channel empire that lasted until 1204 when Normandy was conquered by the French king, Philip Augustus.

To try to understand William’s personality is one of the aims of my book. What I can say here is that we must totally reject the notion that as a child he had had no prospects (that means discarding the whole apparatus of “William the Bastard” and the definition of what might be meant by his illegitimacy). Although his parents were not technically married, he had always been prepared for an aristocratic lifestyle. Psychological analysis must indeed start from the position that he had a secure family background by the standards of his time. His father’s death on pilgrimage to Jerusalem when William was around eight years old may have been an important factor in shaping him. The adult William was able to dominate situations through a mixture of overawing presence, theatricality, fear, and intelligence.

By 1066 his record showed that he could command in war. But also that he knew how to sustain morale. Extensive religious patronage and the dedication of the abbey of La Trinité de Caen, which he and his wife Matilda had founded in June 1066, was part of this. An approximately eight-year-old daughter was handed over to the monastery as a child oblate in the expectation that she would become a nun, as she eventually did.

William and his associates created a cross-Channel empire of remarkable dynamism. The inherited organizational strength and traditions of the English kingdom that had evolved from the 10th century onwards and its traditions were brought into a close relationship with the turbulent politics of the French kingdom. After 1154, the succession of William’s great-grandson King Henry II (1154-89) created an even larger empire that joined Normandy and England with Anjou and Aquitaine.

This cross-Channel empire would certainly not have come into existence if Harold had won at Hastings. And reckoning with that empire was a massive preoccupation for William. The politics of Normandy’s place within the French kingdom meant that he spent around 75 percent of his time in Normandy and France after 1072, after the English had been conclusively defeated. His takeover in 1063 of the county of Maine to the south of Normandy was profoundly influential because it created multiple new preoccupations for him that continued under his successors.

In an article of this kind, I cannot write much about the reinterpretation of detailed topics that are a feature of my book. So, to be topical, I will just say two things.

Firstly, although William the Conqueror’s conquests and the empire he created did change England’s and Britain’s relationship with Europe, they did so by making adjustments within a relationship that already had a long history and which is still with us, and will continue to be.

Secondly, the cross-Channel empire’s final collapse in the time of King John, a man who certainly did not have William’s qualities, brought to the fore in England the tradition that a ruler was morally responsible for maintaining good law. Hence, Magna Carta and all that followed. We cannot of course directly attribute this history to William the Conqueror. But it is another one of the many ways in which his achievements have had an influence that is still with us.