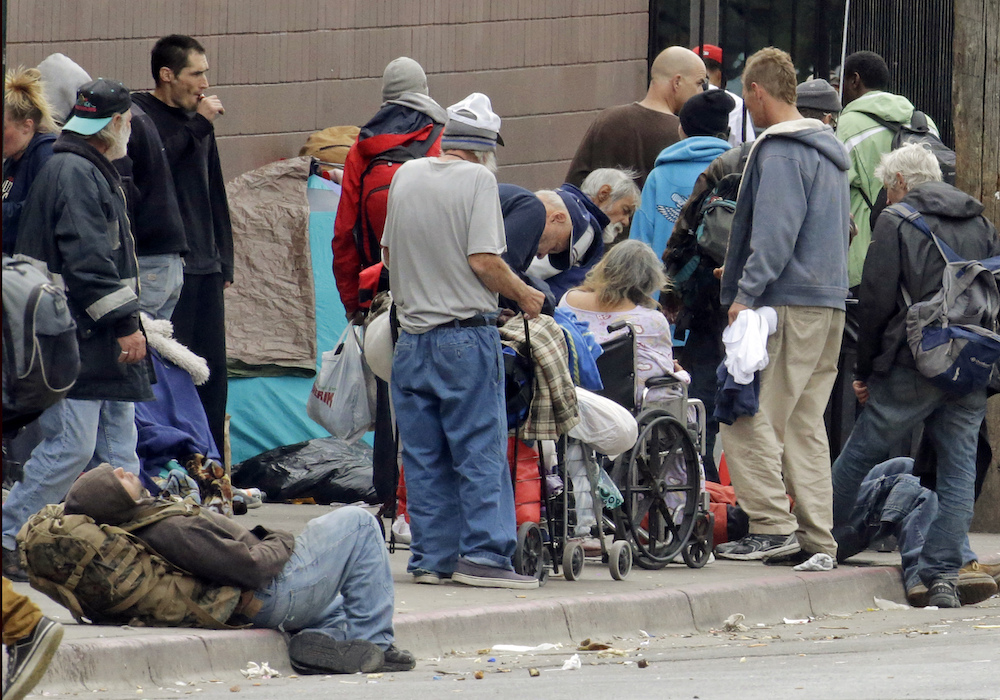 People gather near a Salt Lake City homeless shelter on April 18, 2017. Like other Western cities, Utah’s largest metropolis is beset by a housing shortage, leading to rising homelessness—both likely part of a spillover effect from California. Photo by Rick Bowmer/Associated Press.

And apologies to the rest of the West. California’s epidemic shortage of housing hasn’t just sickened our own state—by driving up prices, forcing residents into rentals and onto the street, and putting a $140 billion annual drag on the Golden State’s economy. The disease is spreading to our neighbors, too.

Today, every significant city in the Western United States is experiencing a minor league version of the California housing crisis. Shortages are especially severe in Seattle, Portland, and Eugene, Oregon, and cities across the Mountain West are seeing big run-ups in home prices and rents; even in Boise, prices are increasing at a nearly 10 percent annual clip.

California’s housing crises and those of its neighbors share some of the same causes: lack of water sources to support development, shortages of skilled construction workers, and the rising price of increasingly scarce land near job centers. But our Western neighbors face an additional challenge: the influx of Californians unable to find housing in their own state.

I witnessed the spread of the California housing epidemic firsthand during a recent trip to Utah. There, the housing shortage, while less severe than in California, is considered historic. The Wasatch Front, which includes Salt Lake City and 80 percent of the state’s population, has seen record increases in single-family home prices and rents that far exceed the fast-growing region’s rising wages. The median home price in Utah is more than $264,000 (nearly $300,000 in the Salt Lake City area), which seems cheap by California standards but is more than 25 percent higher than the national average of $209,000.

For the first time since the 1970s, Utah, growing via births and incoming jobseekers, is adding more households than housing units. As a result, rates of homeownership are falling, homelessness is on the rise, and the Salt Lake City council has declared an affordable housing emergency. There are few homes for sale, even for those who can afford them; in the past five years, housing inventory has dropped 69 percent. The president of Salt Lake’s Board of Realtors has called this “the strongest seller’s market ever.”

Facing these challenges, Utah has a consolation: its housing shortage is not at the scale of California’s yet. But that is cold comfort. Leading Utahans are examining the California situation as an example of how to avoid a deeper crisis.

“California’s housing market can shed some light on our own,” said a recent housing assessment by Envision Utah, a non-profit planning and civic engagement organization. “Faced with rapid growth, many California communities, and even the state, imposed ever-more-stringent regulations designed to curb development, believing that if they slowed development it would put the brakes on growth.”

The trouble, said Envision Utah, was that, “California’s constraints didn’t slow growth, so demand for housing stayed high. Instead, those regulations simply diminished the supply, and we know what happens next.”

While Utahans know California’s problems, we Californians haven’t returned the favor. So late this spring, I went to Utah to see what lessons the Beehive State could offer Californians about housing. California has 13 times as many people as Utah, but the comparison is not completely outlandish. The states have two of America’s most diversified economies, and despite vast open lands, we’re among the most urbanized states in the country. Both states skew young (Utah is the youngest in the nation), our median household incomes are well above the national average, and we have similarly well-educated populations.

Most intriguingly, Utah and California are distinguished by their lack of housing. California is ranked 49th in the country in the number of housing units per person. Utah is 50th. But Utah, for its housing struggles, hasn’t had a shortage as deep or long-lasting as ours, or prices that exceed the national average by two-and-a-half times. Why?

One part of the answer might sound obvious: Utah doesn’t need as many housing units because it has the country’s largest families and households, a product of the prevalence of the Church of Latter Day Saints. That suggests one solution to the housing crisis—California could embrace Mormonism as its state religion—that I considered omitting from this column because it’s wildly impractical. But it’s no more farfetched than the 50-plus bills in our state legislature that offer minor or counter-productive changes to California’s housing markets.

California is ranked 49th in the country in the number of housing units per person. Utah is 50th. But Utah, for its housing struggles, hasn’t had a shortage as deep or long-lasting as ours, or prices that exceed the national average by two-and-a-half times.

Putting religion aside, the most serious difference between Utah and California housing involves local government. Utah is a place where state government defers to local government, and local communities retain control over their destiny. California is not.

It’s hard to exaggerate how little control California communities have over their fate. For 40 years, California government has been the site of a war between a state government that has centralized power at the expense of locals, with the help of voters. While housing is financed with money from all over the world, it is approved and built locally, so when we limit the power of local governments, one power we limit is the power to approve housing.

Today, California local communities are badly constrained from both the left and the right. Liberals enact and defend state environmental regulations that make it slow and costly to build housing. Conservatives enforce state limits on local taxes, especially Proposition 13, that create incentives that discourage the building of housing.

This state of affairs fuels NIMBYism. With their local representatives having relatively little power, local communities cling to the power they do have: saying no to change in their communities. California’s direct democracy allows communities to use local ballot initiatives to limit growth restrictions, no matter the statewide need for more housing.

Utah, a strait-laced place, has almost none of California’s local whips and chains—there are few local anti-growth restrictions, no state environmental law like California’s project-blocking CEQA, no Prop 13, and little NIMBYism. It takes years, even decades, for brave developers to navigate California’s anti-housing regime and build something. In Utah, housing comes together in a matter of months.

“We don’t have the problem you have with widespread anti-growth sentiment,” says Utah economist Robert Spendlove, a member of the state legislature.

That culture makes Utah likely to resolve its housing problems before they do more damage to its people and economy. There’s momentum to lift limits on housing density and streamline permitting processes to make them even quicker. Utah developers and builders are already adapting to the shortage by increasing production of more moderately priced homes and apartments.

In California, the response is very different. Gov. Jerry Brown and leading legislators want to impose even more rules on local governments, with the goal of forcing the construction of more housing. That might sound good in theory, but local governments are already weary of state mandates. Might new housing ones only worsen the state-local war and encourage more defiance and more NIMBYism?

Of course, it would be incredibly difficult to end California’s state-local war, restore more power to local government, and eliminate tax and regulatory limits that discourage housing. But how easy is it to live under a miserable housing shortage that ends up exporting our people—and our housing challenges—to states like Utah?

Failing to address our housing crisis is bad for California. And it isn’t very neighborly.