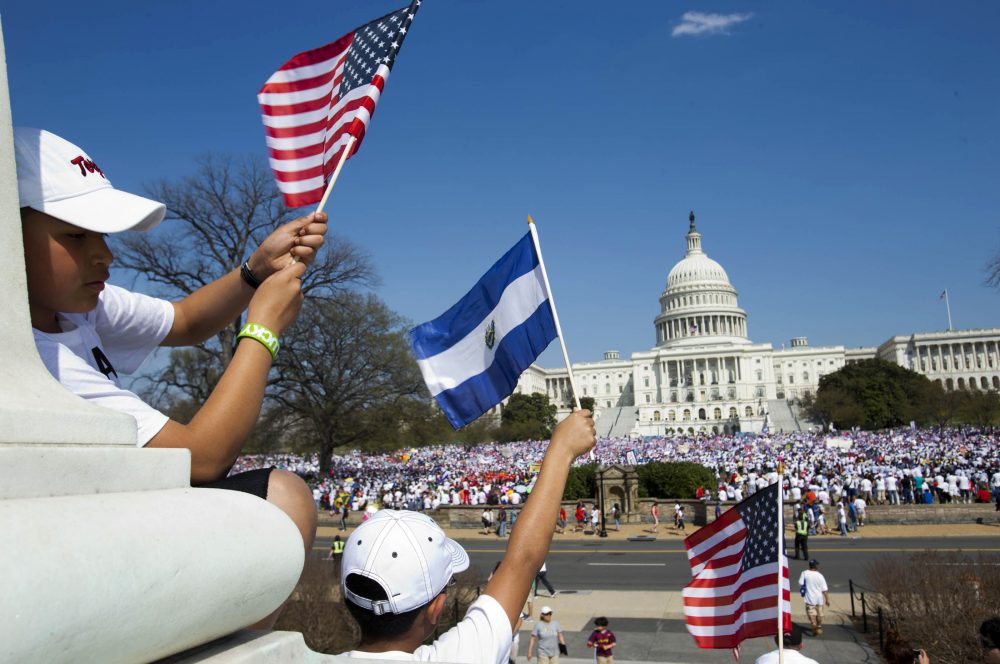 U.S. and Salvadoran flags fly side by side at a “Rally for Citizenship” on Capitol Hill, April 10, 2013. Photo by Jacquelyn Martin/Associated Press.

If you quit today, everything you did yesterday will be wasted.

That is the phrase I grew up living in my native El Salvador.

I emigrated to Los Angeles in 2014, a long trip by land that took me two months. I needed to leave San Salvador: I had dreams of being a journalist, but I had no money. I could only afford two years at the Technological University of El Salvador. And economic life was too dominated by maras, or gangs. They are engaged in widespread extortion and selling drugs.

So with $100 in my pocket, I came here. I saw terrible things on the road, including human trafficking, and I crossed the border walking in the dark for five hours.

I thought I had passed the hardest tests to get here. But the tests keep getting more difficult. Today, more than ever, I need to rely on that phrase about not giving up.

This year, the environment has changed for immigrants. I see more immigration officers in my neighborhood, and more people have been removed.

Most importantly, I find it harder to secure and maintain a job. At first, I worked 10 hours a day, washing cars in Santa Monica. I got the worst sunburn from all that outdoor work, and my feet were wet all the time. It was a very low average salary for a place like California, but it was a steady paycheck. After six months of that, I found a job as a dishwasher in a Chinese restaurant. The pay was not good over my nine months, but the paychecks arrived on time.

The people I know are more anxious and scared. And employers do not want to hire undocumented people.

Unfortunately, I was fired. The reason: I had not provided the necessary legal documents since I am undocumented. I have not been able to get such a regular job since then. And that means I had to stop taking English as a Second Language classes that I need for my education and to start a career. Instead, I have taken very different jobs like cleaning, gardening, painting, and assisting with the remodeling of apartments.

Since Donald Trump became president, everything has been more difficult. The people I know are more anxious and scared. And employers do not want to hire undocumented people. The president’s racism has real and serious consequences for people like me.

I am 25 years old, and I think I can be a great contributor to this great country. But to do that, I need protection from immigration enforcement and more freedom to work. People like me have found jobs, but we can lose them at any time. I wish there was some way to get documents in an approved way, and submit them so that I could work without being under a cloud.

This should be possible. The state of California has a system in which you can provide paperwork and learn to be a safe driver, and then get a driver’s license even if you are undocumented. I have a license, and therefore I am legal to drive because of it. That license allows me to do the work I have.

Instead of keeping people in fear, why not give immigrants ways to do things right? In this way, today’s work can be based on yesterday’s work, and you can actually get somewhere.

I am Roberto Flores. And maybe I still have not reached my goal, but I am closer to it than I was yesterday. And I am not quitting.