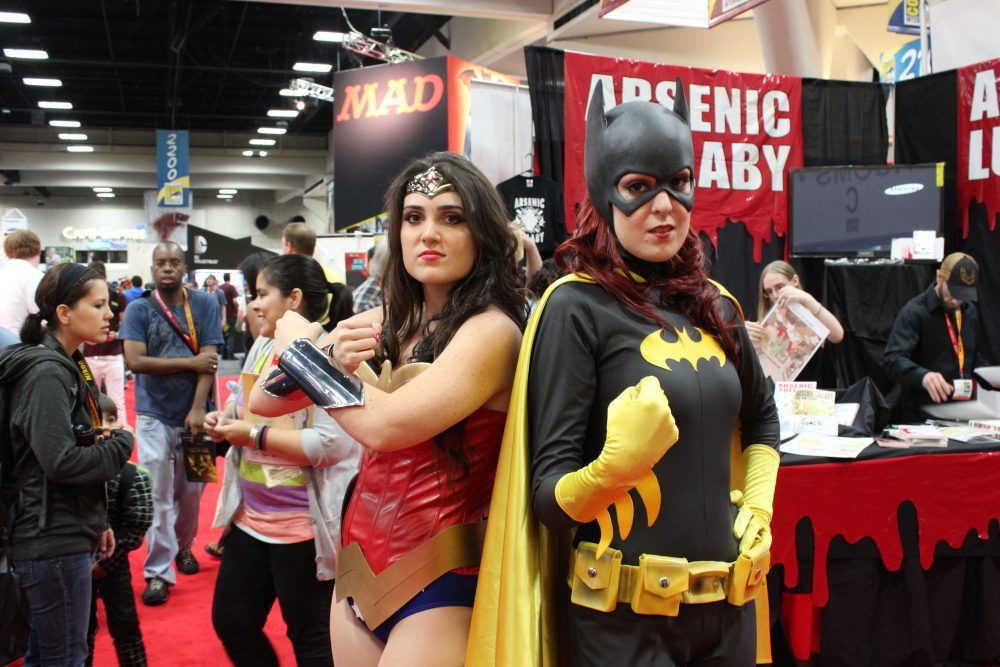 Fans dressed as Wonder Woman and Batgirl at a recent ComicCon. Photo courtesy of Pat Loika/Flickr.

Last year, DC Comics’ bestselling graphic novel was Batman: The Killing Joke. Originally published in 1988, it’s one of the most famous, and infamous, superhero stories of all time. The book began with the Joker attacking Barbara Gordon and leaving her paralyzed, spurring Batman on a campaign of vengeance. Now, decades later, this assault could define the direction of a blockbuster cinematic franchise. Barbara Gordon is Batgirl, and she’s set to be the next DC Comics heroine to headline her own solo film.

Coming after this summer’s smash hit Wonder Woman, Batgirl is poised to make a powerful statement on the role of women in superhero media. Director Patty Jenkins’ Wonder Woman was a commercial and critical success for Warner Bros. in part because it abandoned the bleak tone of its moody, male-led predecessors in the DC cinematic superhero universe, presenting a compassionate, powerful heroine who has inspired fans all over the world.

With Batgirl now in the works and tentatively scheduled to hit theaters in 2019, it would seem natural for writer and director Joss Whedon to follow Wonder Woman‘s lead in both tone and characterization, but Batgirl’s backstory makes this a complicated proposition. Much like Wonder Woman’s, Batgirl’s comic book past includes many genuine, inspiring examples of female empowerment. However, it also contains episodes that highlight a fundamental contradiction in how the superhero industry presents powerful female characters. While these women are depicted as strong and proactive, their stories often include plot elements in which they are brutalized—sexually and otherwise—and victimized. They inevitably overcome these horrors and fight on, but these scenes border on exploitation. With the superhero genre in particular, such plotlines appeal to the prurient fantasies of elements of the predominantly male fan base, objectifying female characters and undercutting their powerful attributes.

Batgirl was a strong role model at the start. Created by Gardner Fox and Carmine Infantino in 1967, her alter ego, Barbara Gordon, was a brilliant librarian who took off her glasses and let down her hair to become a superhero. Batman initially told her that he and Robin “can’t worry ourselves about a girl,” but she proved more than capable of handling things by herself. In her first caper, Barbara crafted her own costume and accessories and pursued the villainous Killer Moth, despite Batman ordering her to stay away. When Batgirl ended up saving the Dynamic Duo and capturing her foe, even the Caped Crusader was impressed: “From what I’ve seen, she doesn’t have to take a back seat to anybody!” Five years before Wonder Woman appeared on the cover of the debut issue of Ms. Magazine and was reinvented as a modern feminist icon, Batgirl was embodying female strength and self-reliance. 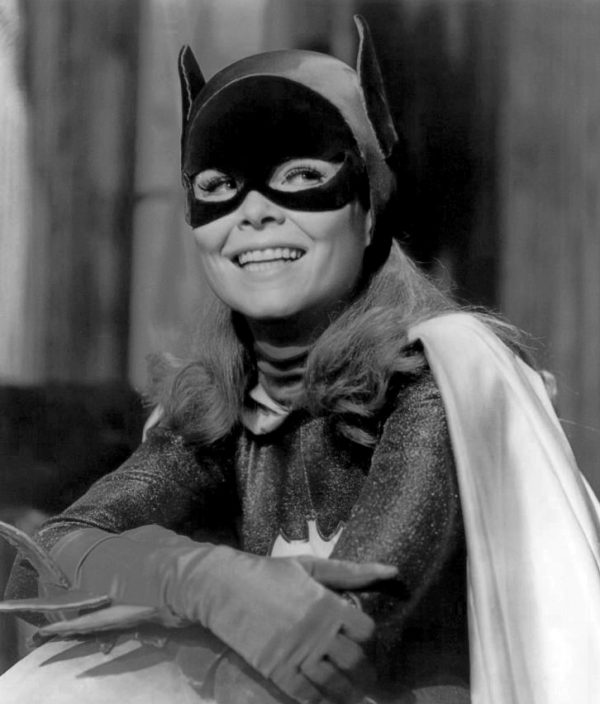 Batgirl beat Wonder Woman to the small screen as well, with Yvonne Craig starring in the third season of the Batman television show in 1967. The program was known for its elaborate death traps, and Batgirl ended up saving Batman and Robin just as often as they saved her. Batgirl also had her own hideout, built her own Bat-cycle, and made her own weaponry. No matter how many times Batman told her, “You better leave the crimefighting to the men,” she always stayed on the case.

Her brand of feminism soon moved beyond battling crooks. After the show ended, Batgirl carried on in the comics and decided that vigilante justice wasn’t enough. So Barbara ran for Congress in 1972 to fight crime through legislation. Her campaign to “boot the rascals out” and tackle gun control, drug trafficking, and prison reform earned her the nickname Babs the Boot, and she was elected on a wave of support from the youth vote. In her new role, she fought bad guys as both a congresswoman and a superhero. While many female superheroes embraced feminism in the 1970s, including Ms. Marvel, Supergirl, and Wonder Woman, Batgirl was the only one to take her fight for justice into political office as well.

But things quickly turned darker for her. Barbara lost her re-election bid in 1980, her regular solo feature ended soon after, and guest spots were few. In the 1980s, superhero comic readership was on the decline as dwindling newsstand distribution was replaced by the rise of specialty comic book shops, and female fans had largely abandoned the genre after decades of male-centric tales. So the industry targeted its existing fan base with edgier content aimed at a more mature, predominantly male audience. “Edgier” meant different things for male and female characters. The latter were regularly sidelined via assault, rape, and death—crimes that stoked the anger of males leads and furthered their stories as they violently avenged these now discarded women.

Case in point: Barbara’s 1988 assault in Batman: The Killing Joke. Creators Alan Moore and Brian Bolland proposed a gruesome scene in which the Joker shoots Barbara and leaves her paralyzed. This brutal attack, they decided, would enrage Batman and add drama to his battle with the Joker. Editor Len Wein was on board and, according to Moore, told them, “Cripple the bitch.” In the resulting passage, the Joker arrived at Barbara’s apartment dressed like a tourist with a Hawaiian shirt, Bermuda shorts, and a camera. He shot her, taunted her as she lay helpless, and then sexually assaulted her while taking photos. The horror proved popular. Batman: The Killing Joke has been a bestseller for decades, and Barbara’s harrowing experience still remains canonical in the comics, despite multiple reboots of DC’s line.

Some writers have tried to move past the trauma. Kim Yale and John Ostrander reinvented Batgirl as Oracle, a computer hacker whose true identity was revealed in the pages of Suicide Squad in 1990. Barbara could no longer chase after criminals as Batgirl, so she used her vast intelligence and computer skills to track them down from her wheelchair. Before long, Oracle was a key source of intelligence for every DC superhero and was starring in Birds of Prey, a series with lengthy runs by writers Chuck Dixon and Gail Simone in which Barbara oversaw covert missions carried out by Black Canary and the Huntress.

Having a person with a disability in such a prominent role was a huge step for representation in the superhero genre, and Oracle quickly became a fan favorite. While Alicia Silverstone’s portrayal of a new, slightly different version of Batgirl in 1997’s Batman & Robin was widely panned—much like the movie itself—Dina Meyer was well regarded as Barbara/Oracle in the Birds of Prey television series in 2002. The rest of the show failed to capture the spirit of the comic, however, and it was cancelled midway through the first season.

Batgirl … had her own hideout, built her own Bat-cycle, and made her own weaponry. No matter how many times Batman told her, “You better leave the crimefighting to the men,” she always stayed on the case.

Birds of Prey also exhibited a preoccupation with Batman: The Killing Joke. Each episode opened with a preamble that showed the Joker shooting Barbara in the spine, repeating the traumatic event over and over. Comics did the same, regularly flashing back to the gruesome attack in a parade of Hawaiian-shirted horror. While Oracle’s larger story was an inspirational tale of overcoming tragedy, the constant replaying of the assault fetishized the violence.

The attack remained a major focus in the comics when Barbara returned as Batgirl in 2011 after experimental surgery gave her the ability to walk again. While the story dealt with Barbara’s PTSD and her path to overcoming her fears, the book was dark and the trauma still haunted her. In one particularly brutal arc, the Joker returned to kidnap and torture Barbara’s mother, resulting in scores of flashbacks and further distress for Batgirl.

But things were changing. Because of the superhero film boom and a diversification of genre, style, and tone in comic books throughout the 2000s, women had become a major part of superhero fandom again, and this led to a new direction for Batgirl. In 2014, Brendan Fletcher, Cameron Stewart, and Babs Tarr revamped the character. Barbara moved to Burnside, Gotham’s version of Brooklyn, and got a hip, young supporting cast that helped her in her battles against evil app developers and other topical foes. The Joker’s attack remained canonical, but it was substantially de-emphasized after Batgirl reached a level of closure on the matter.

This new take on Batgirl was a hit with female readers even before the book was officially published. Her look included sturdy yellow boots, and women’s yellow Doc Martens sold out all over the internet on the day the new design was released. While Batman: The Killing Joke was DC’s top selling graphic novel in bookstores last year, second place went to DC Super Hero Girls: Finals Crisis, a book about the high school adventures of DC’s heroines that was part of a new initiative aimed directly at young girls. Batgirl is a co-star in this line, sporting the same yellow boots she does in her regular series.

Will this lighter angle continue into the Batgirl movie? Part of what’s made Wonder Woman so successful is its tone. Man of Steel, Batman v. Superman, and Suicide Squad were bleak, violent outings full of brooding characters in a dark, desaturated color palette. Wonder Woman is brighter, literally and figuratively. With its powerful heroine front and center throughout, it avoids the objectification and gendered violence tropes that have been common in the superhero genre over the past few decades.

Batgirl could follow Wonder Woman’s example. Barbara’s encounter with the Joker has defined her for decades, and the trauma therein would mesh well with the grimness of the studio’s earlier films, which draw from the same gritty sensibilities of 1980s comics. But her history includes plenty of brighter and more empowering episodes, from the pluck of her earliest years to the determination of Oracle to the fun of her Burnside incarnation. As Wonder Woman and Batgirl’s current comics show, a new generation of fans wants female characters to take charge and have fun, not be mistreated plot contrivances. With Batgirl, Warner Bros. has the opportunity to leave the bleak past behind and embrace a brighter future for its superheroines. It’s time to put away the Hawaiian shirt for good, and focus solely on the yellow boots.