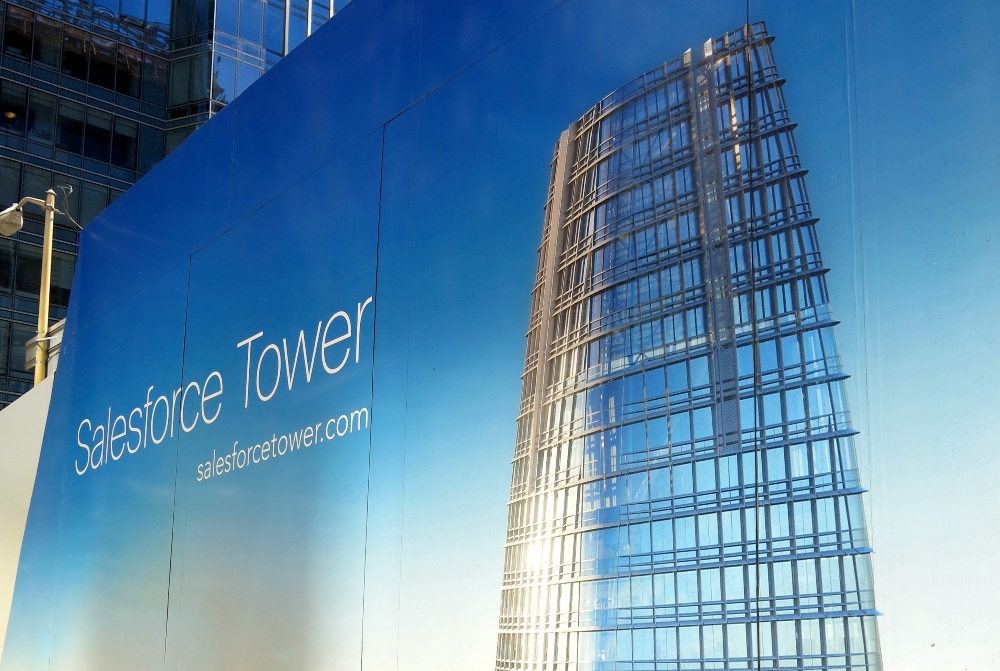 This is a tale of two new skyscrapers—and of two cities that have more in common than they care to admit.

The Wilshire Grand Center towers 73 stories and 1,100 feet over downtown Los Angeles, making it the tallest building west of the Mississippi River. A project of the conglomerate that owns Korean Air, it opened this summer.

In San Francisco, the Salesforce Tower, which takes its name from the cloud computing giant that will be its signature tenant, rises 61 stories and 1,070 feet over the South of Market district. When it opens in early 2018, it will be the second-tallest building west of the Mississippi River.

Each building has literally changed its city’s skyline, and both structures are being celebrated by their developers as emblematic of their cities’ soaring ambitions. Considered together, however, they make a more earth-bound and less flattering point about the state of the California imagination.

The Wilshire Grand, like Los Angeles, is skinny and bright. The side and top of the building emit bright, color-changing lights that can be seen throughout the region. But up close it feels remote, even though it’s in the middle of a metropolis. Reaching the Wilshire Grand on foot isn’t easy, given how it’s cut off by the 110 Freeway on one side, and on two others by the heavy traffic of Wilshire Boulevard and Figueroa Street.

And although the building is touted as a gift to Los Angeles, it doesn’t engage the public at the street level. And when you enter, you’re pointed in the direction of an elevator that takes you up to its most significant space the public can access—the 70th-floor lobby of the Intercontinental Hotel, which has terrific views of the city. (You can go up three floors from there if you’re willing to spend money at restaurants or bars.)

While the hotel lobby offers great views of Los Angeles, the whole structure reveals the city’s weaknesses and dependencies. Because L.A.’s relatively stagnant economy has produced a glut of office space, the tower’s offices aren’t really needed, and so real estate companies promoting the space and politically connected government entities have had to lease the space. And because the building was built by a foreign company—Korean Air Lines and the Hanjin Group—it serves as yet another reminder that L.A., for all its size, is really more an overgrown outpost of other powers than the Pacific Rim capital it purports to be. After all, its major institutions—from some major movie studios, to the Los Angeles Times, to the Dodgers—are owned by out-of-towners. 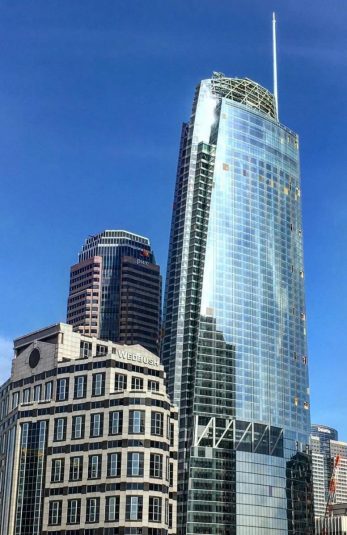 By contrast, Salesforce Tower seems to be of a piece with San Francisco, both for better and for worse. Like the Bay Area’s tech industry, the skyscraper is a dominant, almost menacing presence hanging over the city. The tower’s city connections are deliberate: A bridge connects it to a park atop the still-under-construction Transbay Transit Center. The building also has a street-level plaza that will be Transbay’s main entrance, and a massive, glass-door lobby that will be itself a public space, opening right onto Mission Street.

But the Salesforce Tower also embodies a San Francisco paradox. This place that produces technology to connect the world can feel small and insular. Between the new skyscraper and two buildings across the street, Salesforce is creating its own campus within the city. The park itself is billed as a sort of bariatric chamber (a place “to re-center”) to keep workers from getting the bends in the real world. Within this rarified air, there is retail to satisfy workers’ every need. “It’s all right here. Right now,” says the tower’s publicity.

The preciousness of the project cries out for parody. The building has no corners—it’s all curves. The building also literally breathes, with “innovative outside air intakes on every floor” that “provide outdoor-fresh air to each occupant to support health and wellness.” The interior is expected to include “mindfulness zones” and décor that nods to redwood forests and brown-and-yellow signage of the style favored by the National Park Service.

Such touches fit the only-from-San Francisco corporate culture of Salesforce, which wraps relentless acquisitiveness (now more than 24,000 employees and $8.4 billion in annual revenues) in touchy-feely corporate language that appropriates the Hawaiian concept of “Ohana,” or extended family.

An excerpt from the most recent annual report: “We are the #SalesforceOhana, a trusted family of employees, customers, partners and communities, united around delivering success to all of our stakeholders and improving the state of the world. Our Ohana propels us forward and we nurture it as we grow.” If L.A. is an outpost, San Francisco seeks to turn the world into its #utopia.

For all the municipal differences that the two skyscrapers reflect, what’s most striking about visiting them—as I did recently—is just how similar they are.

Both are glass towers designed for maximum environmental sustainability and earthquake safety. Both seek to capitalize on enormous growth in the neighborhoods below. Both have a statement near their top—an open-air bar on the 73rd floor of the Wilshire Grand, and an LED-based artwork at the Salesforce Tower that is billed as the world’s highest piece of public art.

And both have a bit of fraud in them, at least in matters of height. Like the diminutive Tom Cruise, the Wilshire Grand and the Salesforce Tower make themselves appear taller than they really are. The Wilshire Grand gets its extra height from a 295-foot tall spire on top, which means that from the highest floor, the 73rd, you’re still looking up at other buildings downtown. Similarly, Salesforce has 170 feet of glass panels above its inhabitable space, which goes only 900 feet high.

The architectural cognoscenti have given both buildings mixed reviews and there have been a few shots at each from the hoi polloi (the San Francisco Examiner compared the Salesforce Tower to a sex toy). But mostly there have been shrugs, because neither building excites. And neither structure matches the public esteem for the towers they now top. In L.A., the U.S. Bank building, also known as the Library Tower, still looks taller and more glorious than the Wilshire Grand, even though the newbie is 82 feet taller. And in San Francisco, the hulking presence of the Salesforce Tower seems out of scale compared to the graceful Transamerica Pyramid, which is 200 feet shorter.

But to protest these new skyscrapers is pointless, because both buildings reveal a hard truth about power in California: For all our boasts about being the home of new economies and progressive politics, our corporations still stand the tallest. Korean Air’s logo lights the Wilshire Grand’s crown. And San Francisco, for all its supposed independence, has genuflected to Salesforce, agreeing to rename the Transbay Transit Center and the park on top of it for the cloud computing company.

I’m disappointed that all that money and corporate power couldn’t make either skyscraper a true marvel. Neither is big or grand enough to make you say “wow.” And in fact, both buildings were supposed to be bigger—Wilshire Grand was originally planned as two taller towers, and Salesforce as a 1,200-foot-tall giant—but were downsized through corporate compromise.

Perhaps anticipating criticism, Korean Air Lines’ chairman Yang-Ho Cho has quoted a Buddhist monk in official letters about the Wilshire Grand: “Perfect is not something that already exists; perfection lies in the ever-changing moments that comprise our lives.”

Fair enough. But the problem with California’s skyscrapers is not a lack of perfection, but a lack of imagination. Our two greatest cities have produced two new large buildings that offer little in terms of a vision for a future.

If California is going to build giant monuments above faults, then why can’t our skyscrapers take bigger risks in their design and their contents? Why can’t they offer edges that incite love or hatred, that provoke us to aim higher?

A structure that stands 70 stories tall really needs to stand for something.