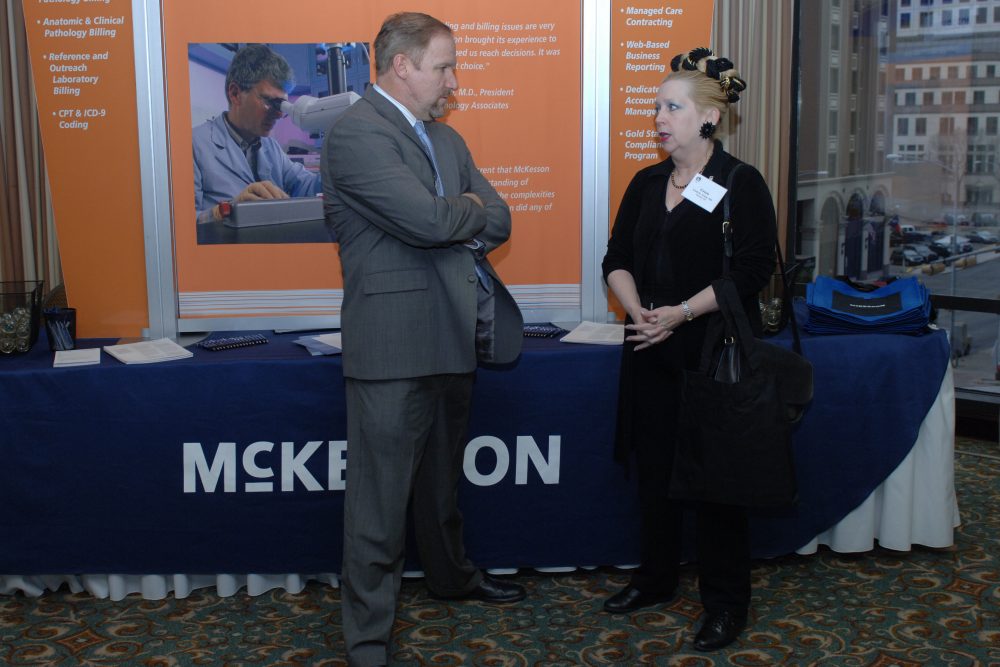 California is so big that you don’t need to be a mouse to hide here. You can be a giant elephant, and still escape notice.

Californians have little sense of some of the largest and richest institutions in our state. For example, here’s a straightforward trivia question that, I’ve found, stumps even Californians who know the state quite well: What is the second-richest company in California after Apple?

The answer is: McKesson.

You’ve never heard of it? You’re not alone (though you probably don’t work in health care).

McKesson is a “massive corporation hiding in plain sight,” Fortune wrote recently. And its headquarters hides in a very conspicuous place—in an office tower at the intersection of Post and Market Streets in the heart of San Francisco. The fact that a company can be both so big and so unknown shows how the tech sector has warped Californians’ sense of what is important in matters of business and commerce.

In fact, McKesson is not only California’s second-largest company, with nearly $200 billion in annual revenues, but also the fifth-largest company in America. (Apple, tops in the state, has $215 billion in annual revenues). A massive health care middleman that reaches almost every corner of the health care world, McKesson distributes pharmaceuticals and other supplies from the companies that make them for the doctors and hospitals that give them to you.

This is a decidedly unsexy, low-margin business—which is one reason why, despite its massive revenues and reach, McKesson’s market cap of $32 billion badly lags behind Apple ($772 billion) and Facebook ($542 billion). (Comparing McKesson’s stock to price-earnings ratio, of 7-1, to that of Google parent Alphabet, of 37-1, is a pretty good expression of style over substance.) And while other California giants dominate the headlines, McKesson almost never shows up in the state’s news, or becomes a subject of civic discussion or high-profile legislation.

When I called McKesson last fall to explain I wanted to write a column about the company, the very polite and helpful executive who called me back seemed genuinely puzzled why I would want to write about it. And on two recent visits to McKesson Plaza, which is what the space outside the headquarters is called, I encountered two sets of protestors—one opposing U.S. Sen. Dianne Feinstein, who has long had offices in the building, and the other in support of improving wages for janitors who work in the building. Not one of the protestors, however, could tell me anything about McKesson, the company.

This is unsurprising. McKesson is so ubiquitous, it hasn’t put the great efforts into branding that startups do. McKesson also happens to be one of the country’s oldest companies—a longevity worth studying in a state that worships high-flying tech startups that crash and burn in months.

McKesson began in 1833, when a young entrepreneur named John McKesson and his partner opened a drug import and wholesale business in Manhattan, which eventually became best known for pioneering the development of gelatin-coated pills in the 1870s. By the early 1900s, when it was known as McKesson & Robbins, it turned several other large wholesale drug distributors into subsidiaries, effectively creating a nationwide distribution network that would eventually move not just medicines but other products, from chemicals to liquor.

There’s something to be said for a California-based business that is old, boring, and predictably corporate in this, our era of disruptors.

McKesson became a California company through its 1967 merger with Foremost, a food-centric conglomerate named for one of the prize bulls of its co-founder, the retailer J.C. Penney. The combined company, Foremost-McKesson, became the largest U.S. distributor of pharmaceutical drugs, alcoholic beverages and chemicals. By 1970, the firm had set up its San Francisco headquarters, where it remains today.

In 1984, the company was renamed McKesson Corporation, and for two decades it focused more on the growing health care sector, acquiring businesses that distributed health-related products, while jettisoning food, water and chemical companies that were part of the conglomerate.

That devotion to health care, in an aging country with rising health spending, has paid off. A company that had less than $20 billion in annual revenues two decades ago is now pushing $200 billion. The company has also sought to burrow itself into every corner of health care, by making technology and offering advice in managing clinics and pharmacies. (Being a Bay Area company, McKesson also has a venture arm supporting startup companies that are focused on health care challenges, like telemedicine, clinical trials, and supply chain analytics).

But the heart of the operation remains its distribution centers, a system that rivals Amazon’s in scope and revenues. And McKesson’s people express great pride in their logistical ability to get things from place to place in critical amounts of time. Thus, the company’s slogan, “It’s not just a package, it’s a patient.”

Of course, McKesson is not just a logistics company. As the world goes digital, it’s also a technology company that uses advanced health data and analytics with the stated goal of making all kinds of health care systems—from those that get you to prescriptions, to those that allow you to pay your bill—more efficient. In this way, McKesson could eventually affect Californians’ lives as intimately as our more famous technology firms.

When McKesson does draw critical notice, it’s usually either for the pay of its longtime CEO, who has presided over its 21st-century growth, or because something has gone wrong in American health, which means the ubiquitous McKesson bears some piece of the blame.

The most recent example involves the opioid crisis. While the lion’s share of criticism has gone to drug manufacturers, doctors, and pharmacists, McKesson and the other distributors that connect them have faced scrutiny from media and the government for not effectively tracking and responding to suspiciously high orders of opioids to certain parts of the country. (In 2017, McKesson agreed to pay a $150 million civil fine related to how it handled suspicious orders.)

But in today’s California, McKesson is perhaps mostly noteworthy among our richest companies for sins it has not committed.

McKesson does not keep us glued to screens, and thus ignoring our loved ones. It does not spread hate and polarization through social media. It has not collaborated in the government’s mass surveillance. Its CEO does not announce each year that he’s going to visit all 50 states, learn Mandarin, or eat only meat that he kills. And it did not help the Russians steal the 2016 presidential election.

McKesson also hasn’t whined constantly about the California business climate, or publicly threatened to leave the state, or forced San Francisco to give it massive tax breaks, as Twitter and Zendesk did.

There’s something to be said for a California-based business that is old, boring, and predictably corporate in this, our era of disruptors.