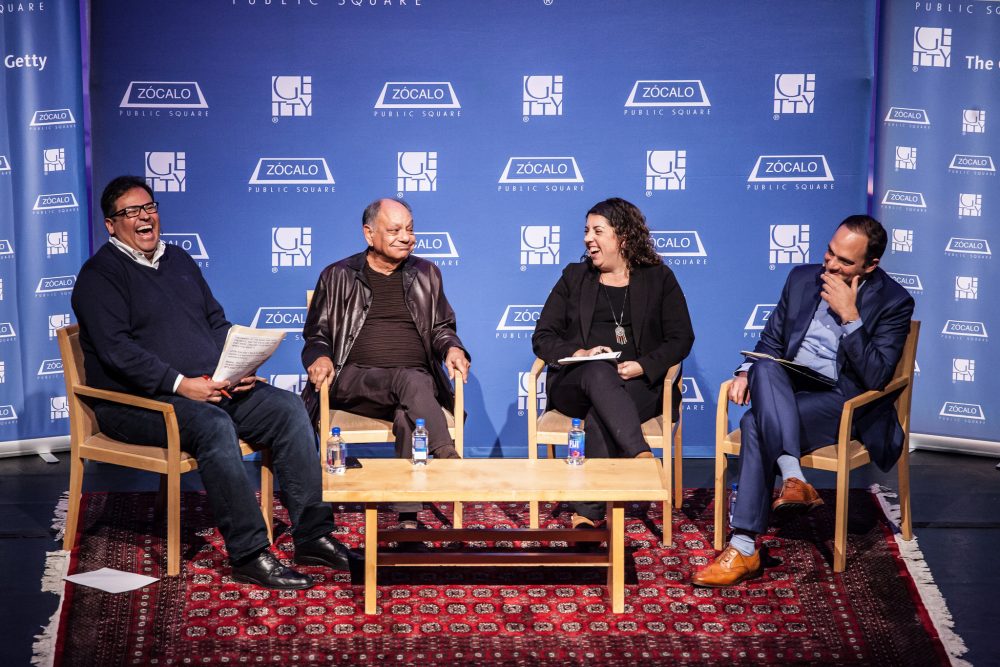 Los Angeles has a Spanish-language name, a distinctly Latino ambience, and a mayor who puffs up with pride whenever he talks about his family’s Mexican roots.

Yet it’s also a city where most people of Latin American heritage are native-born, not immigrants, and where recent waves of white non-Latino newcomers are displacing Latinos across some neighborhoods.

So is Los Angeles really part of Latin America? That was the multi-layered topic of a Zócalo/Getty “Pacific Standard Time: LA/LA” panel discussion at The Getty Center.

“The majority of us are home-grown,” said Rodriguez, who framed the discussion by telling the audience that he was born at the corner of Sunset and Vermont, and that his family had been in the United States so long that he sometimes felt tempted to wear a Pilgrim hat.

Yet many Latino Angelenos, including those native-born, still feel a strong affinity with their ancestral homelands, and wrestle with the “weird distance and tension and affection and allure” of the vast Spanish-speaking universe that spins beyond California’s southern border.

Much of the discussion turned on personal stories and reminiscences. Marin grew up in the San Fernando Valley, the son of an LAPD cop; his parents always spoke Spanish when they didn’t want him to understand what they were saying. “That’s how I understood!”

Marin said that the inspiration for his 1987 satire Born In East L.A. was, fittingly, the offspring of a hybrid cultural encounter. He was reading a newspaper account about a young Mexican American, a U.S. citizen, who’d been deported to Mexico, at the same time Marin was listening to Bruce Springsteen’s hit “Born In the U.S.A.” on the radio.

Marin said that, one time, he himself had experienced the same surreal revelation as the character in his film, when he was touring the U.S.-Mexico border at Tijuana border and saw Mexican migrants waiting for nightfall to cross into the United States.

“I’m living in this twilight zone, like, ‘What is going on?’” Marin said. The comic fantasy depicted in his movie—of the American deported—is a reverse-reality for many Latin American migrants.

Medina, the Times correspondent, spoke of her own occasional feelings of cultural dislocation. Growing up in Riverside County, the child of Panamanian immigrants, she didn’t speak Spanish and all her friends at her predominantly Mexican high school called her guera (white girl). Back then, she had a Salvadoran boyfriend whose parents spoke only Spanish, and she tried to polish up her ancestral language to impress them.

“I still have a terrible vocabulary, I still have terrible grammar, and it’s still a considerable embarrassment,” said Medina, who joked that she also still guilt-trips her mom and dad about not doing more to make her learn Spanish as a child. Over time, she said, she adopted the phrase “Neither from here, nor from there” to describe her sense of bi-cultural identity. “I remember being so profoundly moved by that description. I thought, finally, ‘That’s what I am.’”

Krauze, a native of Mexico City—“East Mexico City,” he deadpanned–described his first quintessential Angeleno experience in 1981, when he was a boy and his father brought him to a Dodgers game to see the Mexican prodigy Fernando Valenzuela pitch.

“We sat in the last seat in Dodger Stadium, right by the lights,” Krauze recalled. Thirty years later he had the honor of throwing out the first pitch for a Dodgers game.

“I felt like I had made it. It was like a fast-track immigration story right there in Chavez Ravine.”

Now an L.A. resident who has no intention of ever returning to live in Mexico, Krauze suggested that he’s recognized in his adopted city by the restaurant workers and other immigrant laborers he encounters around town, while to many non-Latinos he might as well be invisible. Whenever he goes to a restaurant, he makes a point of talking to the kitchen staff, he said, “just to see the face of the uppity maître d’, who has no idea who I am.”

“I bet you get your car parked right away,” Marin joked. “And for free!”

“It’s a privilege, and it’s lots of fun, when I get to acknowledge the people who are the real protagonists,” Krauze said, referring to immigrant workers. “I found my calling here, and my calling is to tell the story of this place. That’s what I want to do with the rest of my life, and do it here.”

Rodriguez asked Marin about a T-shirt the actor wears, inscribed with the words, “Chicano Art Is American Art.” That statement may seem axiomatic, but Marin, a prominent collector of Chicano art, said that for decades many U.S. art museums resisted treating Chicano art as American art, or granting it the same prestige as they did to Latin American art.

“Where does the presumption of foreignness come from?” Rodriguez asked him. Marin suggested that in order to gain recognition for Chicano culture as being simply part of American culture, you must not cater to people’s preconceptions. To date, his private art collection has been exhibited in some 50 museums worldwide, Marin said.

Rodriguez challenged the panel to envision what L.A. will look like 20 years from now, as its native-born population grows ever larger. Medina said she had no idea, but that when she returned to L.A. after living in New York for a decade, she felt she was truly home when she went to a coffee shop and there was a bottle of Tapatío hot sauce on the table.

“I think the mishmash of L.A. is going to get deeper and deeper and more intrinsic. On the other hand, the gentrification is real,” Medina said. Many of her non-Latino friends have no idea they live in a city that is majority non-white, she added.

Another question from the moderator—Which is more Latin American, Miami or Los Angeles?—elicited a range of responses. Absolutely Los Angeles, Krauze affirmed. Medina said she’s never lived in Miami, “and I kind of hate it, too,” but she conceded that in Miami everyone presumes that everyone else speaks Spanish, giving that Florida metropolis a truly pan-Latin feel.

“I have been to Miami, I wanted to hate it and I totally loved it,” Rodriguez said. “The sense that ‘We own this joint’ was just a pleasure to watch, and I wanted to live there.”

Krauze described L.A. as “a lot more tender city” than Miami, because its immigrants have to “wrestle” with their “invisibility all the time.”

When the panel took questions from the audience, one man pointed out that Mexican identity itself is hardly monolithic, but is informed by its own multifarious indigenous cultures and languages.

“You’re absolutely right,” replied Krauze, who said he recently interviewed the Mexican Consul General in New York about the large proportion of Mexican immigrants who primarily or only speak an indigenous language.

“I think it’s a fascinating topic, these sub-divisions,” he said.

Another audience member asked about the strictures that are imposed by tying an individual’s identity to the primary language that she or he speaks. Marin agreed, noting that his father used to get punished at school for not speaking English.

“Why wouldn’t you want to speak as many languages as you can?” asked Marin, who earlier had recalled the heated cultural debates of the 1980s, when he would tell “English-only” proponents that they would have to give up all those all-American Spanish words like “Arizona,” “Colorado,” “San Francisco” ….

And, he hardly needed to add, “Los Angeles.” 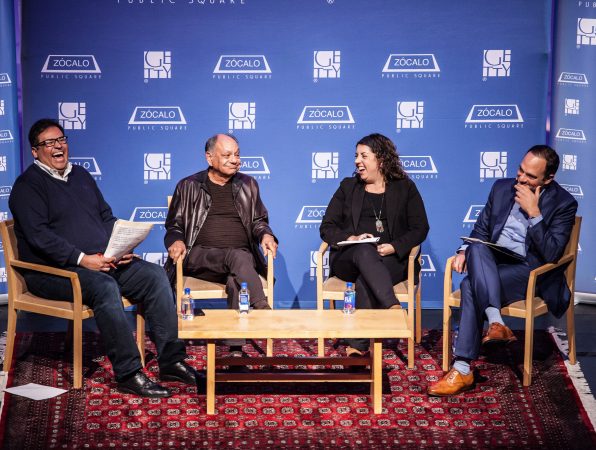 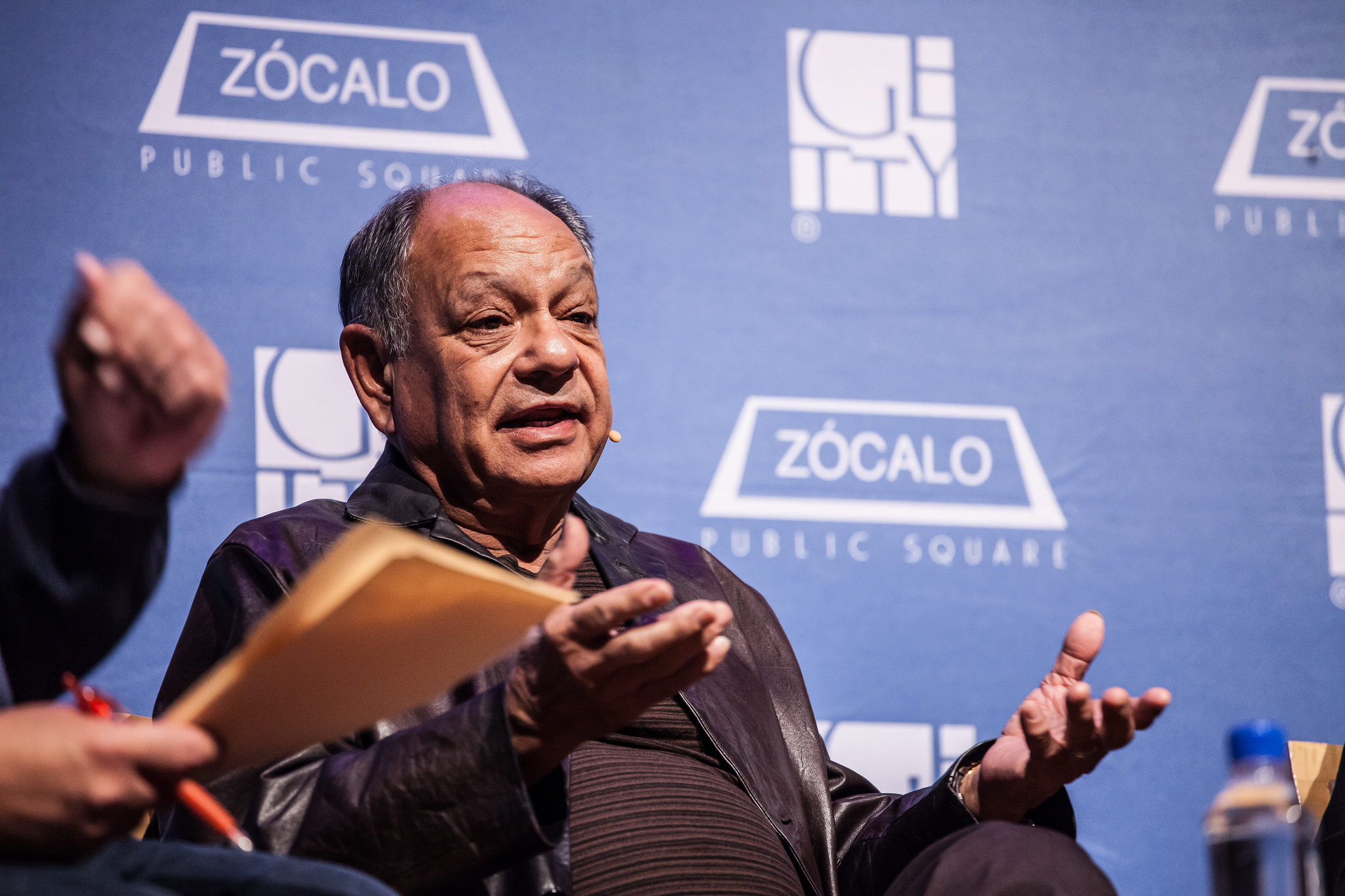 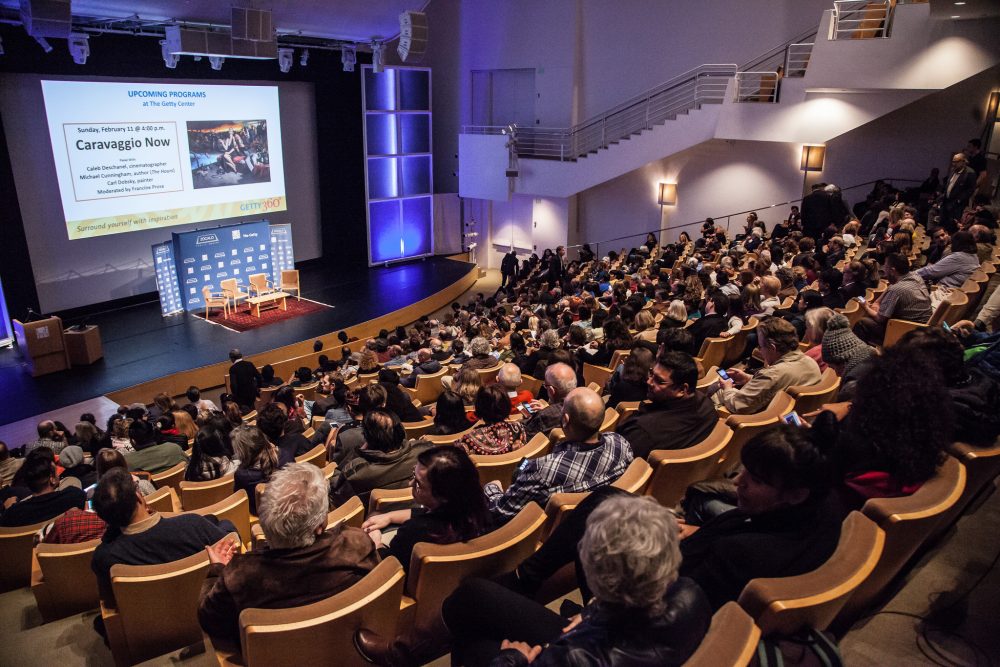 A full house at the Getty Center 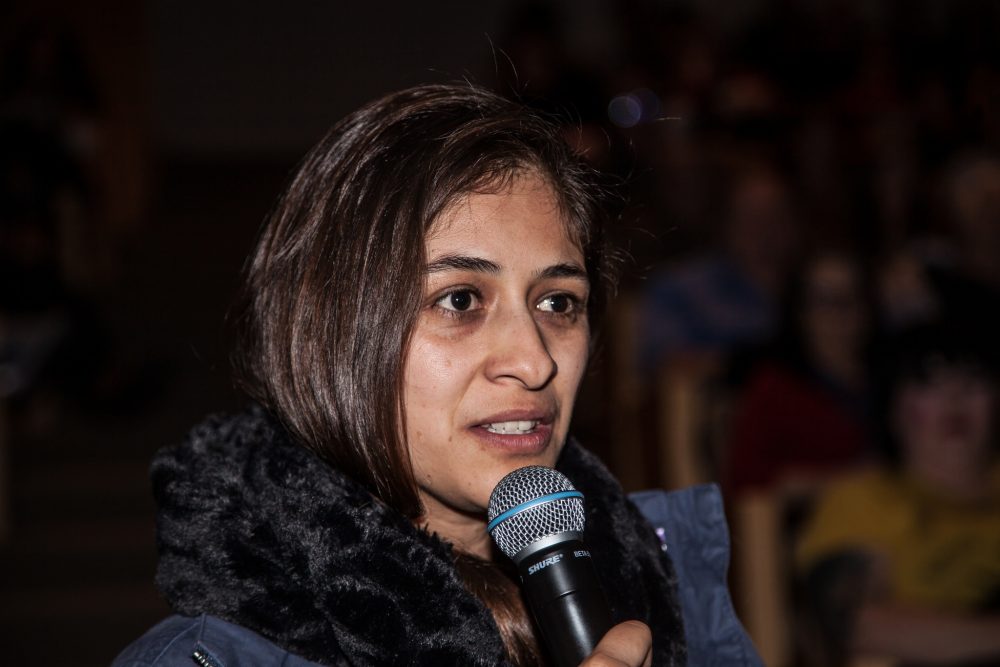 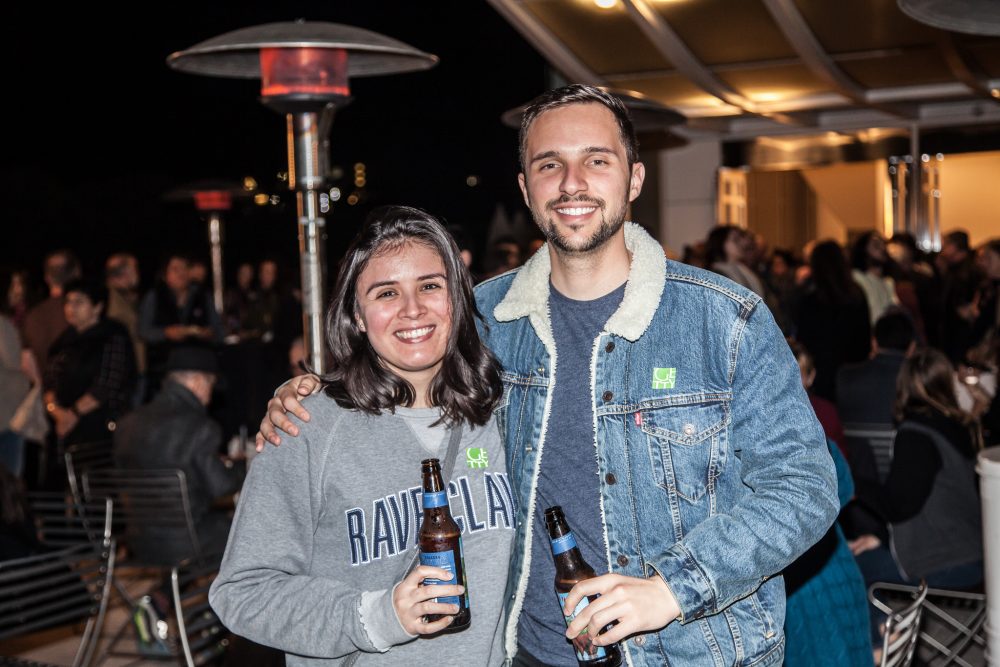 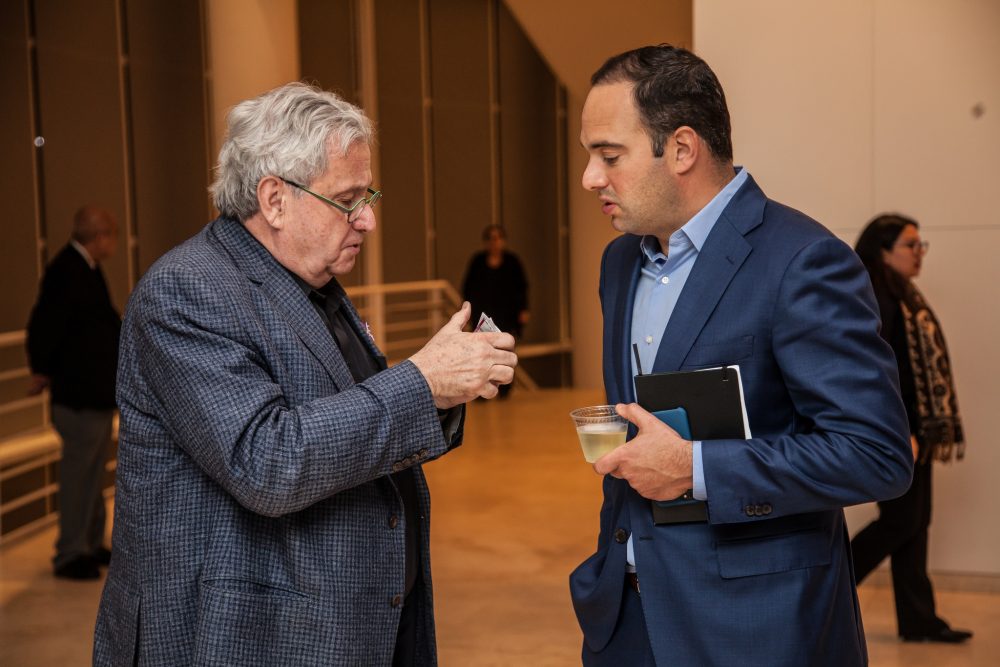 Univision anchor León Krauze speaks with guests at the reception.