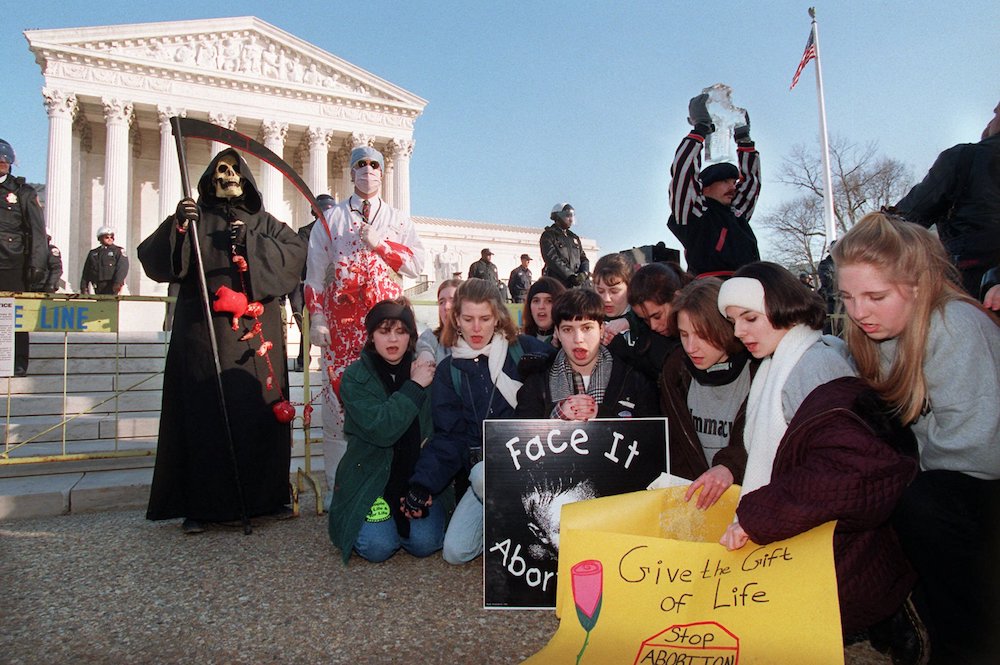 But such associations with the idea of “freedom of religion” are neither natural nor inevitable. Not so very long ago, Americans were more likely to invoke religious freedom to support the very causes, including legal access to abortion, that Christian conservatives now oppose in its name. Such a transition in the meaning of religious freedom is hardly new; the concept has always been malleable and contested. Tracking these changes can help us see how we understand the role of religion in modern life, as well as how to imagine more expansive possibilities for what religious freedom is.

When the first U.S. Congress debated and ratified the Bill of Rights, the clauses on religion represented a compromise between those who wanted to prevent federal interference in the established churches that many states maintained, and those who aimed to level the playing field by eliminating state support for all churches. But the right to freedom of religion was applied only unevenly to Catholics and Jews, and not at all to Native American religious traditions or to the African-derived traditions practiced by many slaves.

In the early 1830s, Massachusetts and Connecticut became the last states to eliminate their formally established churches. Still, most states continued to privilege Christianity—often Protestant Christianity in particular—through prayers and Bible-reading in the public schools, blasphemy laws, restrictions on who could serve on juries or hold public office, and much more. Faced with protests from religious minorities, the powers that be defended these policies in the name of religious freedom. The nation rested on Christian foundations, they argued, and this freedom meant above all that Christianity must be publicly honored and freely practiced.

At the same time, minority groups—Freethinkers, Jews, Catholics—claimed religious freedom as their own. Many Protestants agreed, especially those (like the Baptists) who had begun as dissenters against the established churches and remained committed to free church ideals. They believed the separation of church and state to be essential for their own churches and for every other religious group to thrive.

The Supreme Court rarely ruled on cases involving religious freedom until the middle of the 20th century, when it began to hold the states—along with the federal government—accountable to the Bill of Rights. The Cold War emphasis on “faith” and “freedom” brought renewed attention to this ideal. While many U.S. Christians called for a return to values that they believed all Americans should share, a diverse cast of dissenters and minorities stressed the rights of individuals and minority groups instead. Through the tenacity of the civil liberties and civil rights movements, this dissenting approach emerged victorious in the courts.

By the 1970s, the courts and the legislatures most often viewed the separation of church and state as a prerequisite rather than a barrier to religious freedom. Jehovah’s Witnesses won the right to proselytize in the streets; the Amish won the right to withhold their children from public schools on religious grounds; and the courts ruled that prayers and Bible readings could not be sponsored or mandated by officials in the public schools. Incarcerated people from many different religious traditions asserted their right to the free exercise of religion in the prisons. 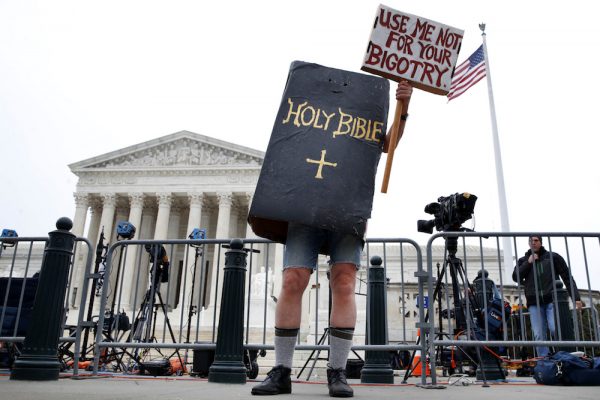 In keeping with this emphasis on individual and minority rights, most Americans in this period assumed that the principle of religious freedom favored pro-choice politics. The court’s decision in Roe v. Wade (1973) highlighted a constitutional right to privacy more than the freedom of conscience, but it clearly emphasized the rights and freedoms of the individual.

Soon after that decision, an interdenominational group of Protestants and Jews founded the Religious Coalition for Abortion Rights, later renamed the Religious Coalition for Reproductive Choice, to defend the legalization of abortion against its detractors. They contended that the American tradition of religious freedom did not allow any religious group to legally impose its strictures on all. People of faith and good conscience held many views on this issue, they explained, and each woman had the right to make her own decision. The group’s members carried banners at marches and rallies that read simply “Religious Freedom.”

They were not alone. The American Baptist Convention passed this resolution in 1981: “We recognize that the First Amendment guarantee of the free exercise of religion protects the right of a person, in consultation with her advisor, spiritual counselor, and physician, to make a decision of conscience for or against abortion.”

The Southern Baptist Convention was more divided, with some conservatives in the denomination immediately lining up against Roe v. Wade. But up until the early 1980s, the denomination’s Christian Life Commission held that although most Southern Baptists could not personally support abortion, this was a matter of conscience that—in keeping with Baptist tradition—could not be dictated by law.

Even Catholics were not unanimous on this question. The Catholic Church very clearly opposed any legalized abortion. But several lay organizations and even some bishops echoed former President John F. Kennedy’s views on church-state separation and applied them to this question. In a religiously diverse country, they argued, no church should impose its own standards on all.

Catholics for a Free Choice, a small organization, went so far as to join the Religious Coalition for Abortion Rights. The larger National Association of the Laity took a more moderate stand: “the Court’s decision is not inconsistent with the Catholic Church’s teaching that responsible persons exercise their conscience in matters of morality.” The Catholic Church could teach that abortion was morally wrong, the association argued, without “imposing its position on our fellow citizens who may not agree with us.”

To be sure, Roe v. Wade had created the conditions for pro-life activists to position themselves as conscientious dissenters against the new legal standard. Health care legislation in the 1970s and 1980s increasingly incorporated “conscience clauses” allowing providers with religious objections to avoid any personal involvement in abortions. Nevertheless, up until the early 1990s religious freedom was far more likely to be invoked by pro-choice rather than pro-life voices.

Ironically, the successes of the pro-choice and the LGBTQ movements, which made first abortion and then same-sex marriage legal in the first place, created the conditions for new religious freedom claims.

Meanwhile, an increasingly vocal and overwhelmingly white Christian right was turning religious freedom into its own rallying cry. Historian Randall Balmer has described how an evangelical right mobilized in the late 1970s against the IRS’s withdrawal of tax-exempt status from racially segregated private Christian schools—which they argued ought to be free from state control—and against the court decisions that limited state-sponsored prayer in the public schools. In other words, the (white) Christian right had invoked this freedom first of all to defend embedded practices of racial discrimination and public Christianity against the legal victories of the Civil Rights Movement.

In the mid-1990s, conservative evangelicals and Catholics forged a new alliance in the name of religious freedom. They now called on this freedom not only to defend school prayer and “parental choice” in education, but also to reframe and re-energize the movement against abortion. As the gay rights movement gained momentum, they invoked religious freedom to argue against same-sex marriage as well.

This too was a reversal. In the 1970s, a few religious groups had begun to solemnize same-sex marriages, seeking legal recognition for them on religious freedom grounds, as Sarah Barringer Gordon recounts in her book The Spirit of the Law.

Ironically, the successes of the pro-choice and the LGBTQ movements, which made first abortion and then same-sex marriage legal in the first place, created the conditions for new religious freedom claims. Until abortion and same-sex marriage became legal, their opponents had no legal framework to push back against. Now, as they work to make abortion and same-sex marriage illegal once again—thus imposing a specific conservative Christian morality on all—they invoke the rhetoric of pluralism and individual freedom to voice their dissent. The gulf between liberal and conservative Christians on issues of gender and sexuality, as chronicled in Marie Griffith’s new book Moral Combat, has only widened in recent decades and shows little sign of abating.

At present, an overwhelmingly white and conservative Christian movement has effectively laid claim to the cultural value of religious freedom. This tactic enables a certain slippage, an easy identification between one brand of Christianity and religion writ large. One writer for the Catholic News Agency recently claimed: “A network of wealthy donors is funding a series of well-organized lobbying campaigns to restrict legal protections for religious freedom, in order to advance access to abortion and LGBT causes.” Here we see how a group that maintains significant cultural and electoral power frames itself as a beleaguered minority. President Trump’s May 2017 executive order on religious liberty catered directly to this constituency, promising to protect all religion but actually recognizing only the preoccupations of the conservative Christian right.

In recent years, a reconfigured Supreme Court has expanded the freedom of religion in new directions. In the Hobby Lobby case, the court granted a corporation the right to refuse to provide contraceptive coverage to its employees, as the Affordable Care Act required. If religion is understood as a private affair—a matter of conscience, protected from the state—then granting religious freedom to a corporation significantly expands the scope of the private, as historian of religion Finbarr Curtis has described. Rather than protecting religious minorities or the individual employees most affected by such policies, this new religious freedom further empowers the Christian majority and adds to the overwhelming power of corporate America.

Equating religious freedom with white Christianity also overwhelms a wide field of actual and potential religious freedom claims. In 2016, for example, the Standing Rock Sioux Nation briefly argued that the proposed Dakota Access Pipeline would desecrate their sacred land and infringe upon their religious freedom. But this argument gained little public attention and no traction in the courts, and the pipeline went through as planned.

The same tortured logic of religious freedom is obvious in the Trump administration’s recent restrictions on immigrants, refugees, and Muslims. Some federal judges have ruled the president’s successive orders on immigration unconstitutional on the grounds that they discriminate against a particular religious group. Yet the Christian conservatives who praise Trump for protecting religious freedom seem more than ready to support what some of them openly applaud as a “Muslim ban.” Nor do they speak out when local zoning ordinances are used to prevent the construction of mosques and Islamic community centers; or when town councils pass legislation that claims to prevent the imposition of Sharia law—an invented threat based on grossly distorted views of Islam.

This interpretation may not survive for long. This winding history shows that religious freedom is open and available for those who seek to claim it. Muslims and their allies invoke the freedom of religion to combat a variety of legal and zoning restrictions, as well as anti-Islamic bigotry and violence. Progressive church leaders active in the “new sanctuary movement” have responded to draconian enforcement of immigration law by providing shelter in their churches for immigrants being targeted for deportation. They too are invoking this freedom. Their claims have so far received little attention in the media or from the current administration.

But that, like the definition of religious freedom itself, will change.