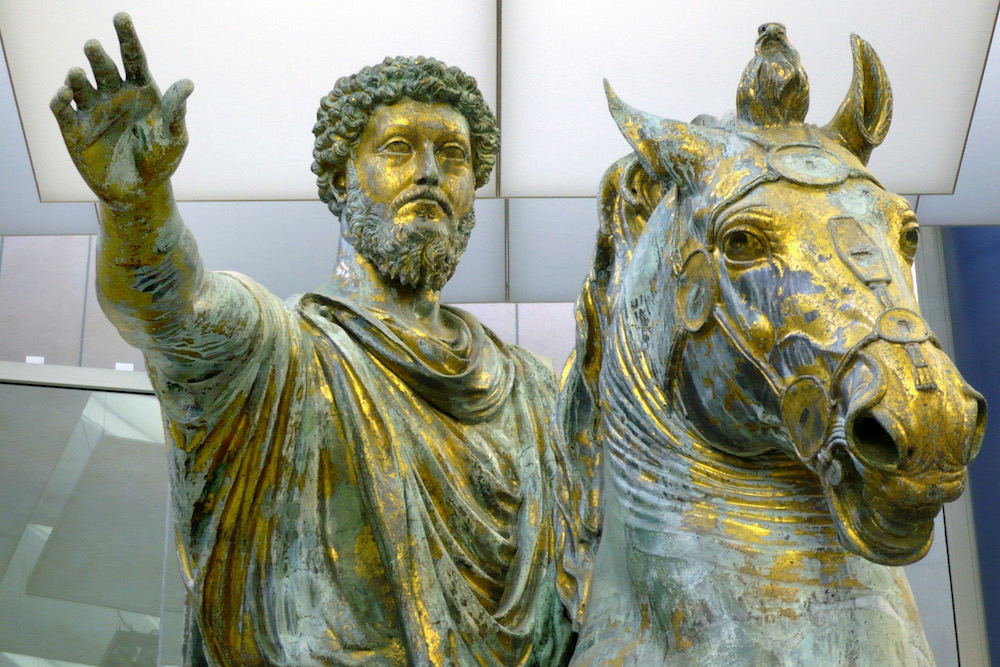 The Marcus Aurelius Statue in the Capitoline Museum in Rome. Photo courtesy of Zanner/Wikimedia Commons.

Statues are created to project meaning. Contemporary public artworks, for example, use purposely veiled messages aimed to generate thoughtful exchange with the viewer and to prompt reflection. By contrast, historic monumental sculptures employ symbolism that is direct and intentionally easy for viewers to understand.

The ancient Roman tradition of publicly displaying monumental equestrian statues of important historical figures is a particularly striking case of how to convey meaning in no uncertain terms.

Traditionally cast in bronze, these huge forms of horse and rider display messages of dominance, power, and virtue through strength. And, by doing so, they established a template that has persisted for centuries.

Perhaps, no statue embodies these values more than a famous depiction of the emperor Marcus Aurelius on horseback.

The figure of the emperor is seated on top of a regal horse, artfully posed as if it were moving gracefully through a crowd. The rider fully controls his muscular mount. The horse’s bit and bridle indicate that there were originally bronze reins, which were separately cast pieces lost over the centuries. The emperor’s posture, legs, and complete mental dominance over the beast underscores his great power. The emperor effortlessly motions with an outstretched left arm and hand. Art historians have defined this gesture as one of “pacification,” displaying authority and the ability to subjugate foreign enemies or forces of chaos that threatened the stability of the Empire.

This monumental bronze equestrian statue, inarguably one of the most extraordinary artworks that has come down to us from antiquity, was created to commemorate Marcus Aurelius’ great victories over Germanic tribes in 176 CE, or possibly posthumously to honor his prosperous reign (161-180 CE), when he, was canonized as one of Rome’s greatest emperors—a leader who ruled with intellect and decisive action.

Thousands of years later, the statue has become a hallmark in art history textbooks and the pride of the Capitoline Museum in Rome, where droves of tourists flock to see the work and to match it against the illustrations in their guidebooks.

Equestrian statues were not first seen in Rome. Before the Roman Empire existed, other regional cultures used this form of representation to commemorate their noblemen, kings, and heroes. The Romans were acutely aware of these artworks, especially those from Greece, and sought to collect and display them in their luxury villas, as well as dedicate them in public and religious spaces.

In contrast to many excavated archeological discoveries, the statue of Marcus Aurelius and his horse stayed above ground, where it surveyed the streets of Rome for nearly 2,000 years.

Roman equestrian statues, like many equestrian statues before and after, were about much more than men with horses; they embody the relationship between the leader and the military. The equites, a military class, played an incredibly important role in Roman society. Generally speaking, the equites received positions of privilege through merit and imperial favor instead of through a noble bloodline. Emperors selected members of this class for their elite Praetorian Guard, and used them politically as a counterweight to levy power from the high-ranking bureaucrats of the senatorial class.

The Western tradition of creating equestrian statues is interlinked with an appreciation of the equites. In the Marcus Aurelius statue, the emperor’s powers of statecraft are stressed, but his mastery of horsemanship clearly connects him to this elite military class, upon which he depended to manifest his far-reaching power.

Observed carefully, this statue of horse and rider idealizes Marcus Aurelius in an imagined moment of triumph. Romans loved victory, which they celebrated in grand civic gestures called “Triumphs.” They erected massive stone arches, many of which survive in the streets of Rome today, for their military heroes to ceremoniously march beneath in parades. Victorious generals or emperors would have ridden in horse-drawn chariots in these orchestrated events. While it is not specifically a depiction of a “Triumph,” the emperor wears a military cloak representing, perhaps, a humbler moment of victorious homecoming, one that symbolizes all of his achievements.

Ancient sources reference 22 equi magn—colossal bronze equestrian statues—that adorned the imperial capital. It is believed that this Marcus Aurelius statue was one of them, but centuries after the empire fell, the other 21 equi magni—along with hundreds of public statues throughout the city—were melted down during times of war or strife.

This single statue was preserved by a strange twist of fate. During the turmoil of Imperial Rome’s decline and its transformation into a medieval Christian center, the statue was incorrectly identified as the later emperor Constantine, who reigned from 306-337 CE. To later Christians, Constantine was a more favorable historic figure, as they widely believed that his 313 CE Edict of Milan, also known as the “peace of the church,” created a pathway for Christianity to become the principal religion of Europe. Medieval Romans could live more easily under the shadow of a statue identified as the Christian patron Constantine than with the polytheist Marcus Aurelius.

Although modern scholarship can easily settle the matter of the statue’s identity, conflation of Marcus Aurelius and Constantine indicates that, although the two emperors ruled Rome in very different political and social periods, the statue’s message of military prowess and leadership could be applied to them both. Constantine’s most important victory was at the Battle of Milvian Bridge (312 CE), when he—not unlike Julius Caesar in his famous crossing of the Rubicon—led an army into the city, crushed his enemies, and consolidated his power.

The conflation of Marcus Aurelius with Constantine reveals another part of the statue’s message—in which the mounted hero embodies virtue. Marcus Aurelius has been historically cast as the emperor exemplar, a Stoic philosopher with deep moral convictions. His oft-quoted collection of writings, Meditations, remains standard college course reading. Constantine’s virtue, in contrast, is attributed to his Christianity: He reportedly had a vision of the cross before his fateful battle for control of Rome, which led to his status of sainthood as a true defender of the faith. In medieval and later depictions of Constantine, he is almost always looking up, a gesture meant to signal that God is directly communicating with the emperor in his moment of triumph.

The allure of Rome’s greatness held sway over Western culture for millennia and the Marcus Aurelius statue directly contributed to this phenomenon. Part of what made it so influential was simply the fact that it was visible.

In contrast to many excavated archeological discoveries, the statue of Marcus Aurelius and his horse stayed above ground, where it surveyed the streets of Rome for nearly 2,000 years. By the mid-10th century this statue stood near the Pope’s Lateran Palace, and in 1538 it became the focal point of Michelangelo’s new design for the Piazza del Campidoglio. A replica is there today; the original was moved inside the Capitoline Museum in 1981 for conservation reasons. 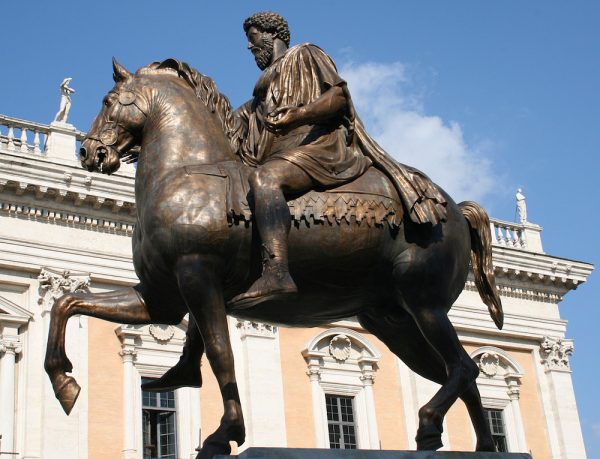 Through the circumstances of its survival, its artistic quality, and its sheer size, the statue became widely known and revered throughout Europe long after the fall of Rome. Local artists and travelers copied it in their sketchbooks and used it as a model for their own artworks. Later rulers appropriated its formidable symbolism for themselves. Charlemagne commissioned his own portraits of dominance, using the Marcus Aurelius statue as a prototype. Machiavellian-style princes of Renaissance Italy revived the ancient Roman tradition in earnest, placing remarkably crafted bronze statues of themselves on mounts in their public squares.

From Europe, the tradition was exported to colonial territories from the early modern period well into the 20th century. The deeply embedded concepts of power and virtue on horseback were exploited by Mussolini and Franco to frame their autocratic regimes—even as the machine gun and other industrial weaponry made mounted warriors obsolete.

Although the specific messaging of any given equestrian statue changes through iconographic details, the basic model persists, as do the core themes of power and virtue. Most equestrian statues visible today in public spaces stick to form by portraying a stoic general on a sturdy horse with an outstretched arm, perhaps brandishing a sword for added effect. Typically, they wear ceremonial dress, not combat armor or field uniforms, a detail that brings them back to their greatest moments of triumph.

In Oyster Bay, the hometown of Teddy Roosevelt, stands a statue (not to be confused with the recently vandalized statue in New York City) that depicts the 26th U.S. president on horseback in his Rough Rider gear, alluding to his leadership of a volunteer cavalry regiment in Cuba during the Spanish-American War. Pulling decisively on the reigns of his horse, and surveying the field before him, he is shown as a man of action, vigor, and clear mind—a rough-and-tumble message that echoes back to antiquity.

In recent months, Americans have fiercely debated whether to preserve or tear down statues of horse-mounted Confederate generals. But criticism of equestrian statues is hardly new to the 21st century; rather, uneasiness with their symbolism has been embedded within the tradition since ancient times. The famous first-century BCE orator and writer Cicero, who frequently commented on virtus—a Roman concept that combines the “masculine” virtues of excellence, valor, honor, and integrity—condemned the erection of public equestrian statues as shameless acts of arrogance. Not immune to political hypocrisy, Cicero later supported resolutions for his allies to be honored by equestrian statues of them installed in a public space. But his core criticism regarding equestrian statues is clear: Representing an individual on horseback in a civic space suggests an infallibility of character and literary sets them above public scrutiny.

A few thousand years later, we can level some new criticism at the Marcus Aurelius statue, or the figure it represents. Even though Marcus Aurelius has historically been labeled one of the “good” emperors of ancient Roman, his army, as with any Roman military force, would routinely massacre, torture, mutilate, and terrorize its adversaries. On the domestic front, he ruled an empire that was bound to an especially brutal and dehumanizing system of slavery. The same indictments can be made against Constantine (who, in addition, ordered the execution of his wife and son), or any of Rome’s emperors.

Yet when one stares up at the statue today—either the one placed in a grand gallery of the Capitoline Museum or the replica in the historic courtyard—the viewer is urged to push those modern criticisms away. The magnificent rider and his steed radiate power and nobility, as if they still were striding through the streets of Rome.

Who would argue that such a venerated artistic marvel is problematic?

The statue itself does not explain the complicated historical circumstances of Roman rule or Marcus Aurelius’ reign, because it has no intention to do so. Instead, it purely celebrates a man for his deeds and the mark he left on the world as viewed by those who commissioned the statue.

Even though historic equestrian statues are direct in their messaging to the viewer, today—if we are viewing these statues for the first or the 100th time—we have the power, and hopefully the virtue, to take a deeper look.