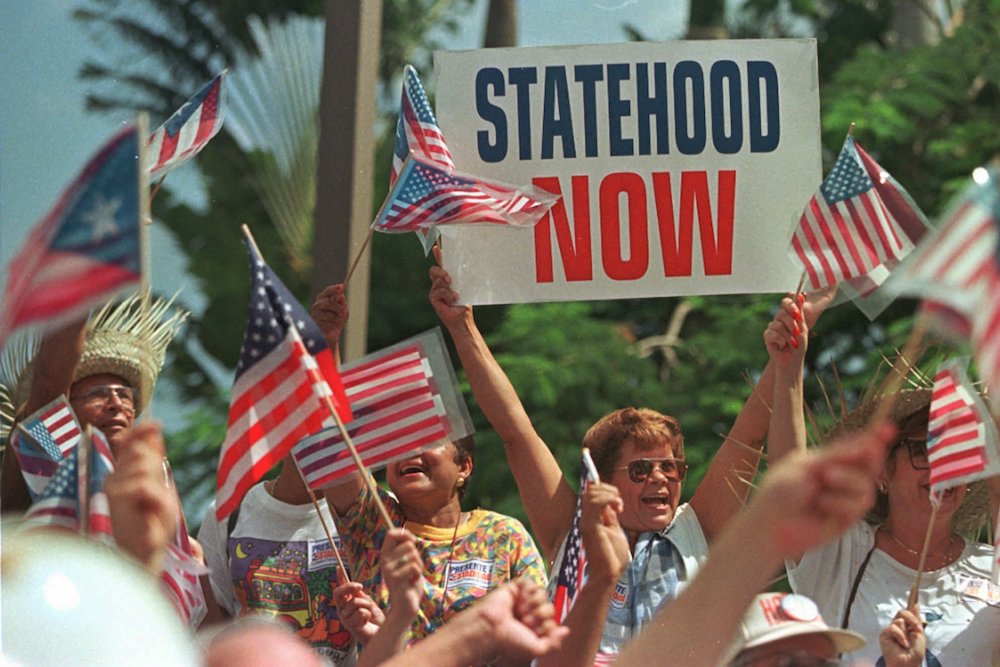 It has been 101 years since the citizens of Puerto Rico were collectively naturalized as U.S. citizens under the Jones Act of 1917. The act was meant to deal with the fact that Puerto Rico was neither a U.S. state nor an independent country. “It was foreign to the United States in a domestic sense,” said a 1901 Supreme Court decision.

But citizenship created contradictions, including that Puerto Rico still feels something less than fully American. Puerto Ricans cannot vote for the U.S. president when they live in the territory, but they can when they reside in one of the 50 U.S. states or the District of Columbia. And in crisis—notably during Puerto Rico’s 2017 bankruptcy, and the federal response to the devastation of the island by Hurricane Maria—the inequality of Puerto Rico is often exposed, and questions are asked again about the Jones Act.

Chief among them, what did the Jones Act actually do?

To understand the Jones Act, it is best to start with a clarification of what the law was not.

It was not the first Congressional statute conferring U.S. citizenship on persons born in Puerto Rico. It was not the last such statute. And the law did not change Puerto Rico’s status as a U.S. territory. But the Jones Act, in its collective extensive of American citizenship to Puerto Rico residents, proved to be a crucial glue, cementing enduring relationships between residents of Puerto Rico and of the United States.

In the aftermath of the Spanish-American War of 1898, the United States annexed Puerto Rico. The terms of the annexation were outlined in the Treaty of Paris peace accords ratified in 1899. Unlike prior treaties of territorial annexation, the Treaty of Paris did not contain a provision extending or promising to extend U.S. citizenship to the inhabitants of Puerto Rico.

As documented in the so-called Red Book files (the official correspondence of the negotiations between the United States and Spain), President McKinley opposed granting citizenship to the “less civilized” non-Anglo-Saxon inhabitants of Puerto Rico and the other annexed Spanish territories. Instead, Section Nine of the Treaty invented a local “nationality” that barred island-born inhabitants from either retaining their Spanish citizenship or acquiring U.S. citizenship.
This local nationality required Puerto Ricans to establish a new allegiance with the United States, while simultaneously barring their membership in the U.S. political community. It allowed the federal government to selectively rule Puerto Ricans as foreigners in a domestic or constitutional sense. However, the Treaty established that Congress could subsequently enact legislation to determine the civil and political status of Puerto Ricans.

In 1900, Congress enacted the Foraker Act, which established the island’s territorial status and affirmed the citizenship provision of the Treaty of Paris. Even though the United States had annexed Puerto Rico, Section Three of the Foraker Act treated Puerto Rico as a foreign territorial possession for purposes of imposing tariffs, duties, or taxes on merchandise trafficked between the island and the mainland. And Section Seven invented a Puerto Rican citizenship to describe the status of island-born Puerto Ricans. A year later, the Supreme Court affirmed Congress’ power to selectively rule Puerto Rico as a foreign territorial possession in a domestic or constitutional sense.

And as members of Congress considered the issue, they decided that the risks of rectifying these problems were low. Most importantly, policymakers agreed that that extending U.S. citizenship to Puerto Rico did not bind Congress to grant statehood to the island.

While the Jones Act wouldn’t pass until 1917, the legislative record shows that Congress had effectively decided to collectively naturalize the residents of Puerto Rico three years earlier, before the U.S. entered World War I. But they still didn’t propose making Puerto Rico a state because a majority of lawmakers opposed the admission of a state primarily inhabited by non-white citizens.

Meanwhile, in Puerto Rico, the debate centered on whether the residents of the island would acquire U.S. citizenship via individual or collective naturalization. This reflected a larger, longer-term discussion over whether Puerto Rico’s future should be one of independence from the U.S., or of an autonomous entity within the U.S., or of statehood.

Never before had the country extended citizenship to an annexed, albeit unincorporated, territory that was not considered a state-in-the-making.

The Jones Act of 1917 amended the Foraker Act of 1900 to address a number of lingering problems in the local government. It also included a citizenship provision that incorporated the local partisan debates over the manner in which citizenship was extended to Puerto Rico under the terms of Section Five.

Yet, while the Jones Act collectively naturalized the inhabitants of Puerto Rico, it did not change the island’s territorial status. Puerto Rico remained an unincorporated territory or a foreign territorial possession for citizenship and constitutional purposes. Because persons born in Puerto Rico were born outside of the United States, they could only acquire a derivative form of parental or jus sanguinis citizenship.

In order to address this problem, Congress subsequently amended the citizenship provision of the Jones Act on three occasions over the next two decades. The 1927 amendment made it possible for the remaining 288 Puerto Rican citizens and other aliens residing in the island to naturalize through an expedited process. In 1934, Congress introduced a territorial form of birthright citizenship permitting the children of Puerto Ricans born in the island to acquire U.S. citizenship at birth.

But even though the Nationality Act settled questions of citizenship, it did not deal with the larger question of the island’s political future.

To this extent, the Jones Act represented an advance for American citizenship: Never before had the country extended citizenship to an annexed, albeit unincorporated, territory that was not considered a state-in-the-making. Finally, the Jones Act citizenship was an early affirmation of a permanent and irrevocable relationship between Puerto Ricans and the United States. Once Congress clothed Puerto Ricans with U.S. citizenship, it could not strip them of this right.

Read as a whole, this patchwork of citizenship laws illustrate the contradictory U.S. territorial law used to rule Puerto Rico for more than a century. On the one hand, the United States continues to govern Puerto Rico as an unincorporated territory—and that is a foreign possession in a domestic or constitutional sense. Simultaneously, federal citizenship laws treat Puerto Ricans as members of the U.S. political community.

In part, these territorial laws create a two-storied home. Citizens residing in the first floor—the mainland—enjoy the full legal and political rights of membership in the U.S. political community, whereas citizens residing in the basement—or Puerto Rico—live with a second-class status determined by the laws and policies Congress and the Supreme Court extend to the island.