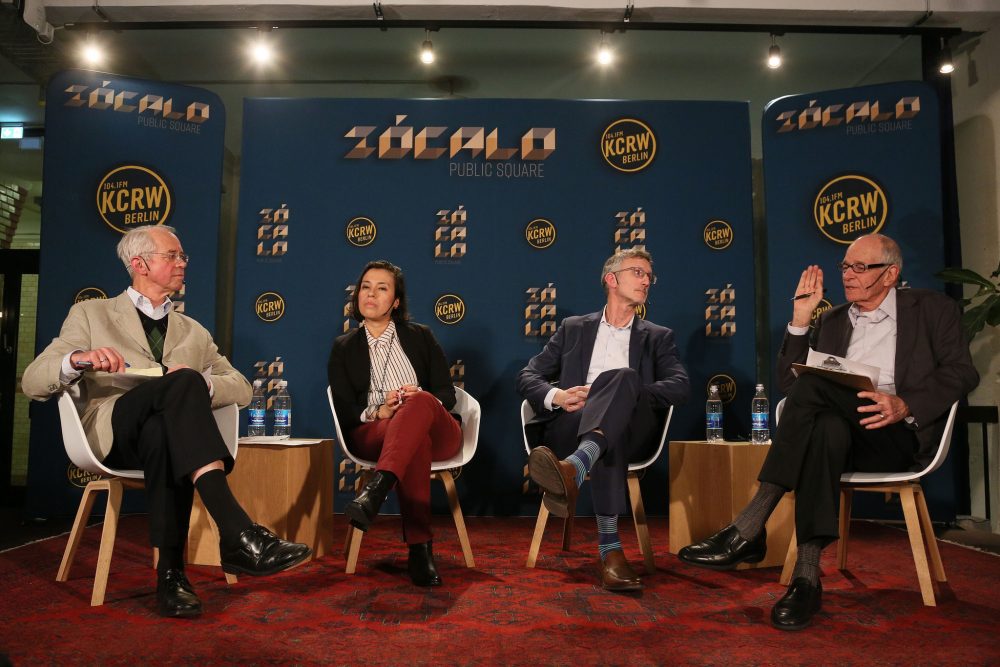 From a historical and global perspective, democracy is more of a force than it ever has been. But when you examine country by country, and government by government, there’s ample reason for concern that democracy—and the culture of democratic citizenship—is eroding, if not reversing.

That consensus emerged from a Zócalo/KCRW Berlin panel discussion, held in partnership with the Villa Aurora/Thomas Mann House and the Daniel K. Inouye Institute. The conversation took place before a packed house at the CIEE Global Institute in Berlin, a city that less than a century ago watched democracy collapse and dictatorship arise in a span of months.

Moderator Warren Olney, host of KCRW’s “To the Point,” opened the evening by asking whether it’s possible to describe as “democracies” countries as disparate as Norway, India, and Indonesia. By what criteria should democracies be assessed, and by what data can they be measured?

Ted Piccone, a Brookings/Robert Bosch Foundation fellow and former Clinton administration foreign policy advisor, said that when the U.S. State Department several years ago convened the first meeting of all the world’s democracies, it used the Universal Declaration of Human Rights to determine which countries to invite. Democracy’s requisite features, according to that influential document, are free and fair elections, freedom of the press, freedom of assembly, independent judiciary, some kind of system of checks and balances, separation of powers, and civilian control of the military.

Popular sovereignty is the litmus test of what a democratic nation-state should be, Piccone added; there must be a sense of trust between citizens and their leaders, and there needs to be an informed citizenry in order to make good decisions.

Mélida Jiménez, head of the Democracy Assessment, Analysis, and Advisory Unit at International IDEA, said that because democracy can take many different forms, her organization deploys “a very broad definition of democracy in our work” in order to have an inclusive and comprehensive understanding of how democracies function.

The third panelist, Oxford political scientist Stein Ringen, author of The Perfect Dictatorship: China in the 21st Century, stressed that democracy is a pact between the state and its citizens. Democratic states are unique in that they make two fundamental commitments: They promise to maintain order and protect the liberties of individual citizens.

A little luck also doesn’t hurt for making a democracy function reasonably well, Ringen said, because a strong democratic order must rest on a solid foundation of democratic culture. And today, alarmingly, that culture is being ground down by a growing bipartisan ugliness—even in established democracies such as the United States and Britain. Ever since the furiously divisive “Brexit” vote to quit the European Union, Ringen said, the English people have come to distrust each other and regard those who voted differently as an inferior “sub-human species.” Meanwhile, U.S. surveys have shown that majorities of both Democrats and Republicans say they’d be unhappy if their children married someone from the other political party.

“This is a form of polarization which is shocking and which is new,” Ringen said. “Once this democratic culture starts to erode it’s very difficult to get back again.”

One of the key performance measures of any democracy, he emphasized, is that it be able to manage and respect other people’s opinions. “Democracy is not about agreement,” Ringen said. “On the contrary, it’s about accepting and living with disagreement.”

Olney raised the question of how democratic governments gain their legitimacy. Jiménez responded that, in modern societies, there are many bureaucracies and supranational bodies—some of which are unelected—that exercise tremendous influence over people’s daily lives. Healthy democracies are able to incorporate and accommodate these bodies into their own democratic machinery.

Jiménez suggested that perhaps democracies have been overly focused on setting up institutions, while neglecting the values that those institutions are supposed to embody and defend. Citizens, by demanding better representation from their leaders, can play a greater role in taking back those institutions and salvaging their democratic aims, she indicated.

Olney then asked whether a country such as Egypt, which is about to hold elections, can be counted as a true democracy. Ringen said that elections are a “sham” in one-party states that claim to be democracies. Nevertheless, he observed, even Potemkin democracies like China and Russia that camouflage authoritarian states must make some gesture toward bowing toward popular will.

“Democracy now is the only game in town,” he said. “Even Hitler wanted to be elected. He didn’t succeed in that, so he gave it up. Everyone wants to be elected because it gives them the ability to say that they have the support of the people.”

Jiménez agreed that “democracy is more than an election,” so it’s not enough just to measure election results; political analysts need to look at many different institutions to assess how a specific democracy is working (or not).

“You can be very strong on some democratic institutions and on others you’ll be struggling and you’ll be challenged,” she said. “There’s no perfect democracy and every democracy has variations in how good they’re doing and how bad they’re doing.”

Piccone chimed in that, although there’s no such thing as a perfect democracy, some are manifestly better than others. Looking at recent years, he said, there’s no doubt that, globally speaking, we are in a kind of democratic “recession,” despite a handful of positive examples in places with little previous experience of democracy.

The backsliding in established liberal democracies, he said, has been caused by a number of factors, including globalization’s ruthless apportionment of winners and losers, and the populist exploitation of technology and social media in order to undermine democracy. For democracy to work, there need to be at least two political parties, Piccone said, and there needs to be vertical accountability from the people to the leaders, but also horizontal accountability among democratic institutions.

What do democracies need to do to clean up their act and regain their people’s trust? The panelists offered a host of suggestions. Political elites have alienated themselves not only from the people but also from “the entire democratic system,” Jiménez said. That has to change. A flood of so-called “dark money”—officially blessed by the U.S. Supreme Court’s Citizens United ruling—has contaminated the electoral system. “This is what’s rotten at the core, and we have to address this,” Piccone said. Young people, many of whom declined to take part in the Brexit vote, need to recognize that voting matters and their ballots count, Ringen said.

During the Q&A period, one young woman asked Jiménez how her organization takes into account women, minorities, and other marginalized people when measuring the efficacy of a democracy. “It’s within our mandate to have that data and be able to pick it up,” Jiménez replied. “It’s easier said than done.”

Parker Thomas, an American studying at CIEE, asked about the threat posed to democracy by actors like Cambridge Analytica, which has used sophisticated data-harvesting of people’s personal information to manipulate voters. Piccone said that citizens and politicians both are “way behind the curve in regulating these technologies.” Politicians seeking to influence voting is nothing new; what’s new is the lack of transparency about how it’s being done, he said.

In the end, Ringen suggested, there’s no one-size-fits-all form of democracy. The young United States invented a type of democracy the world hadn’t seen before—what’s to stop us now from finding new ways of holding governments accountable and increasing civic engagement?

“There isn’t any recipe that says democracy has to be of this or that kind,” he said.

And even if democracy can be maddeningly slow, deliberately cumbersome, and requires a lot of work, it also has a capacity that many other forms of government don’t.

“There’s nothing wrong with democracy that citizens can’t fix,” Piccone said. “That’s the beauty of democracy.” 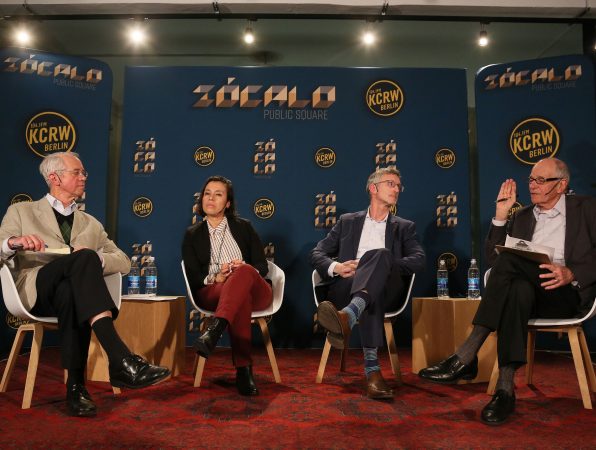 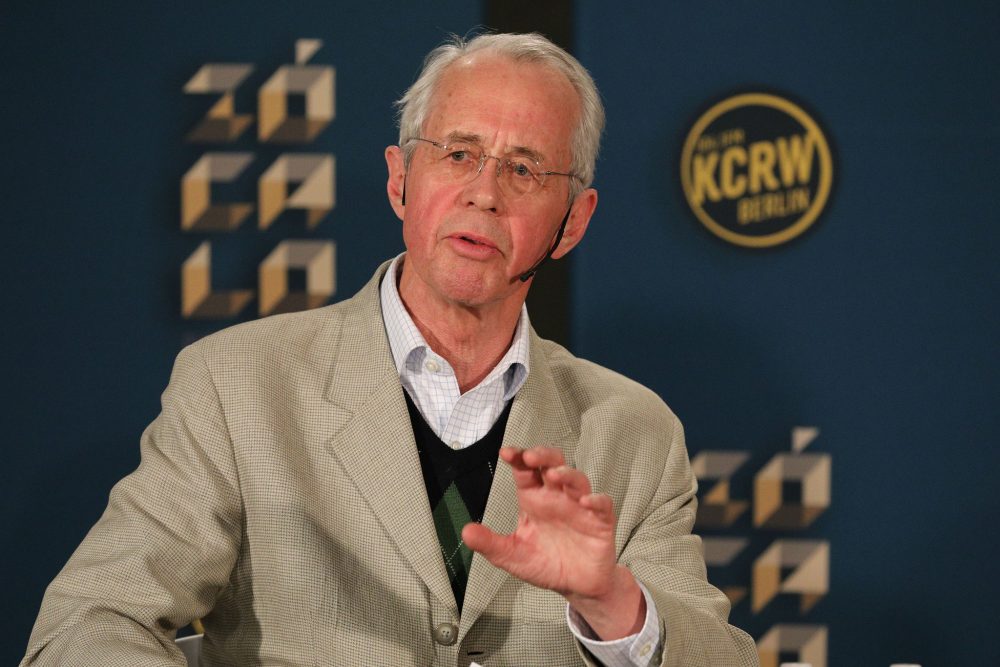 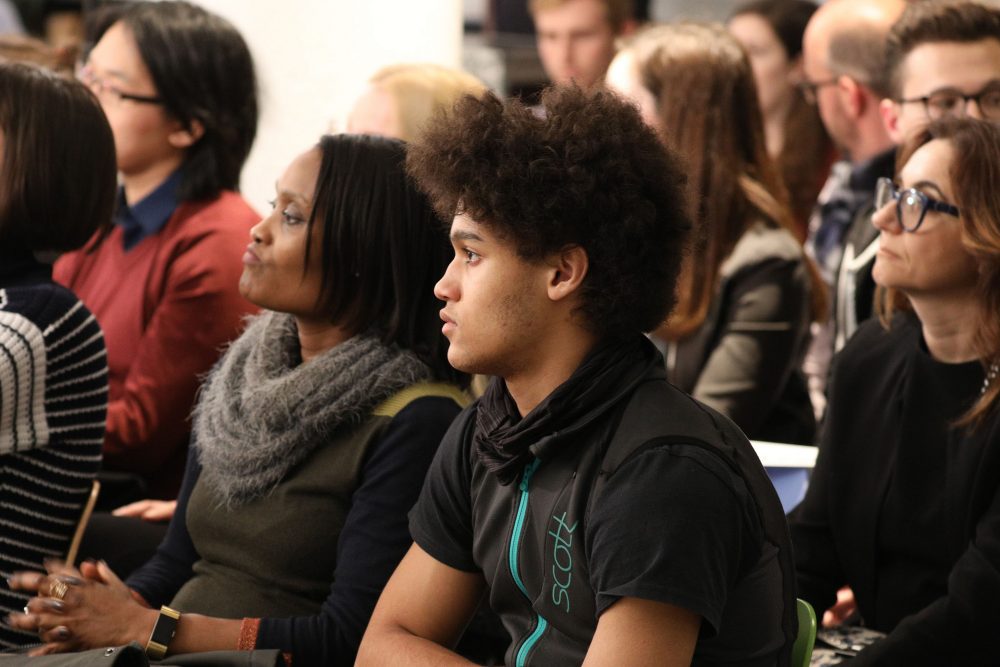 A standing room-only crowd at the CIEE Global Institute in Berlin. 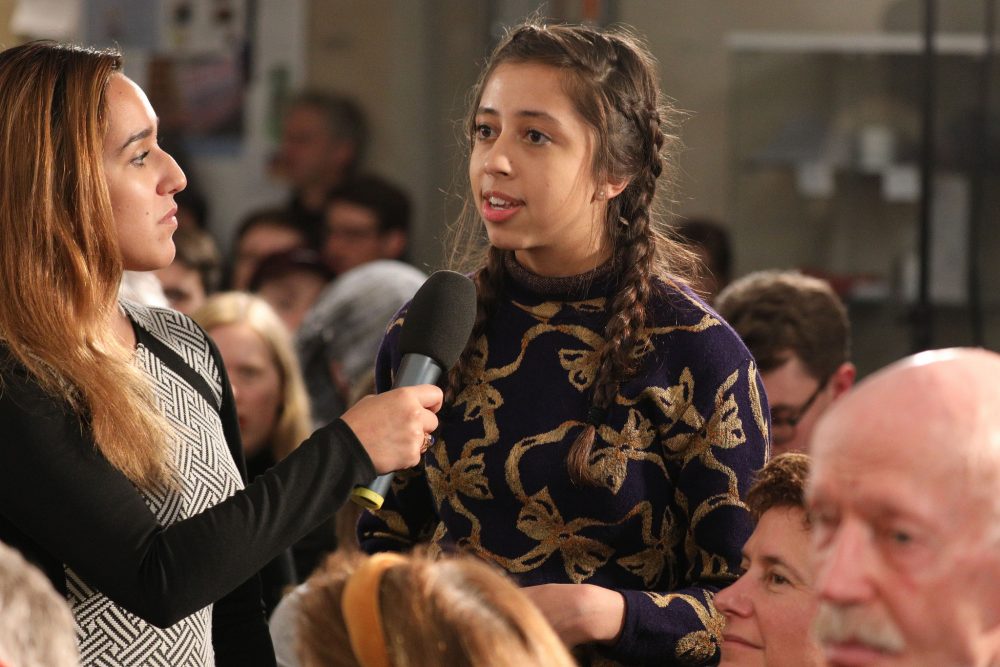 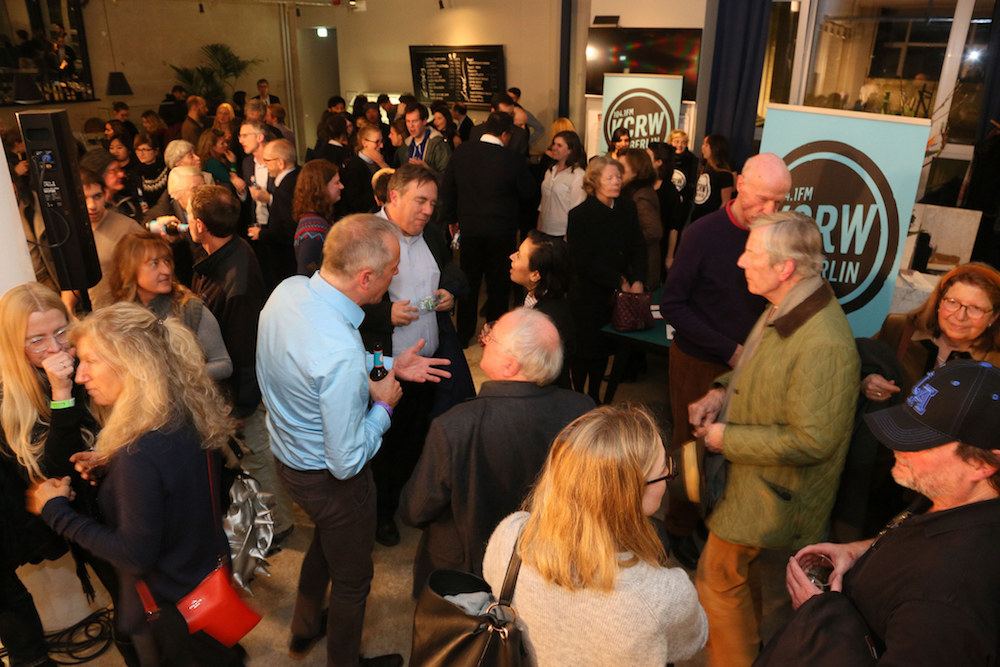 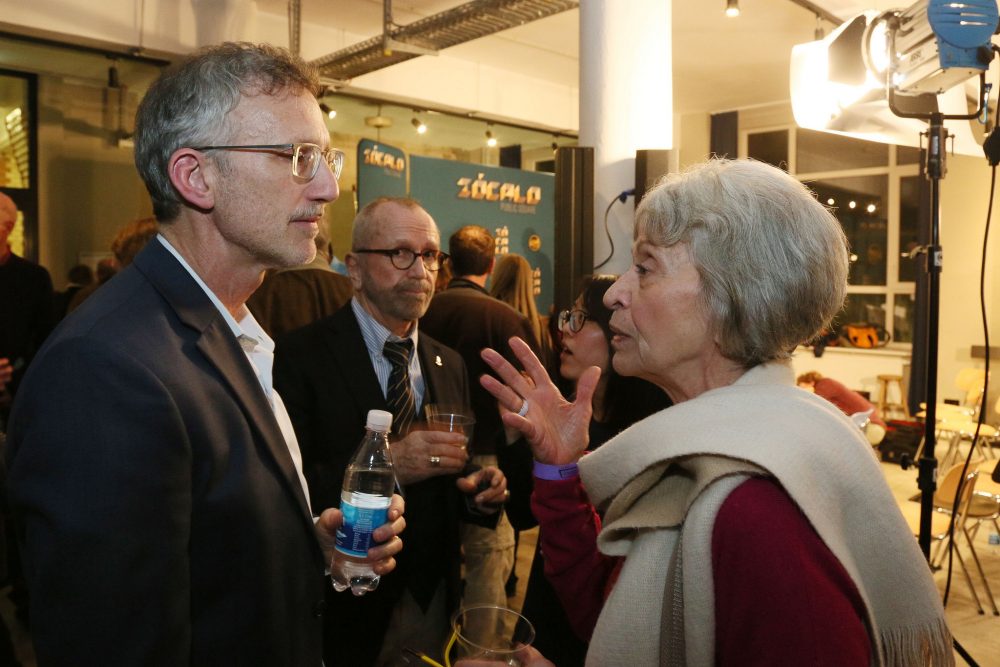