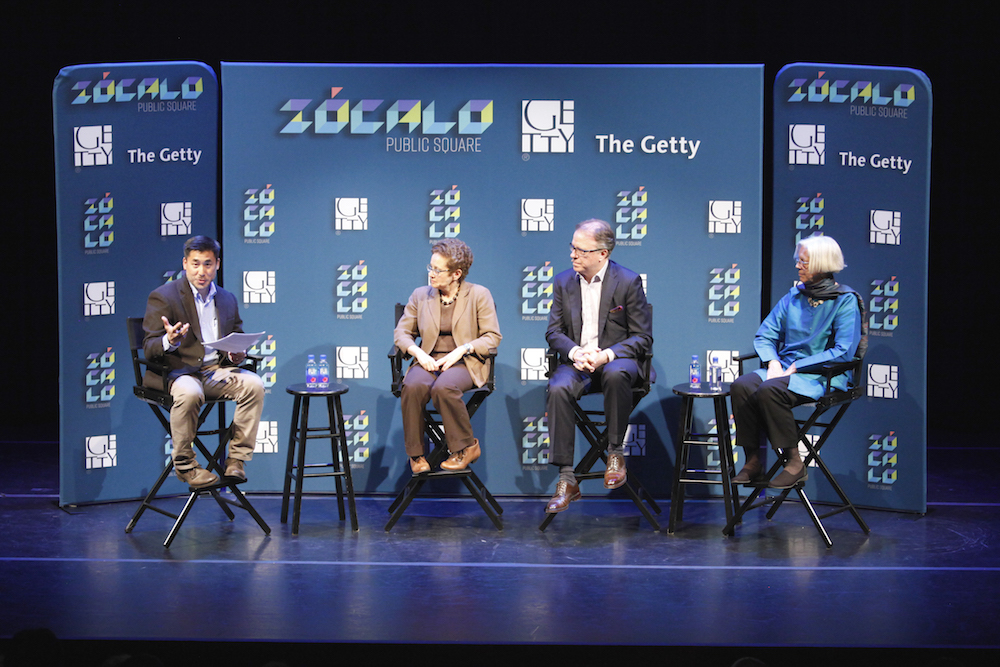 The Romans built aqueducts to carry water across continents, the Aztecs perfected aqua-culture gardening, and the 6th-century cisterns of Byzantium still flow beneath the streets of modern-day Istanbul.

Some antique civilizations knew quite a lot about how to manage and sustain their environments. But what can 21st-century humans learn from their example about how to treat our imperiled planet? That was the central question during a Zócalo/Getty Villa panel discussion titled “What Can the Ancient World Teach Us About Living Sustainably?”

Moderator Scott Tong, sustainability correspondent for public radio’s Marketplace, started the conversation by noting that “our ecological dashboard is blinking in all sorts of ways” in our current Anthropocene age, as human activity becomes the dominant force impacting Earth. He asked the panelists if there are models from antiquity—perhaps involving more collectivist approaches to dealing with sustainability—that could offer guidance.

Anabel Ford, an archaeologist and Director of the MesoAmerican Research Center at the University of California Santa Barbara, pointed to the Maya civilization as a society that had used knowledge to foster sustainability in response to climatic chaos. From Mexico to Guatemala and Belize, the Maya studied the natural cycles of weather to calculate their long-term investments in agricultural strategies such as enhancing crop fertility and limiting erosion, she said.

Today, by contrast, we tend to rely on enhanced technology to bail us out of short-term crises like water shortages, without planning for the long run, suggested Ford, who is best known for her rediscovery of the ancient Maya city center of El Pilar.

Joseph Manning, a historian of Ptolemaic Egypt at Yale University, said it’s important to bear in mind that, even in so-called High Civilizations, the vast bulk of people were farmers living close to the land, and within the natural rhythms and limitations of what the land provided. For instance, the ancient Egyptians intimately knew the seasonal flooding cycles of the Nile River, and “they were very aware that year by year things could change quite dramatically,” Manning said

But as the ancients developed larger, denser urban centers and, eventually, city-states, they grew removed from this intimate awareness, and some of the precautionary habits that went with it. “They were living in nature and also increasingly trying to live outside of nature,” Manning said, “which was probably a mistake.”

Still, he added, ancient farming was based on cooperation and a concept of the greater collective good. “It wasn’t individual farmers farming for themselves. It was very much a group effort. That’s how farming in Egypt worked until 1970 or ’80.”

Similarly, among the ancient Athenians, living compatibly with nature was bound up with ideals of civic virtue and the individual’s duties vis-à-vis the state, said Melissa Lane, a Princeton University political scientist and author of Eco-Republic: What the Ancients Can Teach Us About Ethics, Virtue, and Sustainable Living. As Plato touched on in his Republic, Athenians in the 4th century B.C. were aware that the growth of bigger cities could lead people into greed and political opportunism that undermine society. Striking healthy balances was regarded as crucial in both the natural and man-made worlds.

“What Plato started to say is, we have to go back to the basics of what is a society for, what is a good and flourishing society,” Lane said. The drive for individual material advancement wasn’t seen as compatible with the good society or the good life.

Tong, the moderator, said that an economist might look at sustainability as a simple equation of costs and benefits. From that perspective, societies that poisoned their rivers, chopped down their forests, and turned lush oases into desert wastelands could be condemned for making bad economic choices, not moral ones.

Manning replied that when the earliest commercial markets started forming around 500 B.C., many ancient peoples reacted with concern that such transactions might destabilize social relationships and erode the bonds of trust that hold societies together.

Ford, the UC Santa Barbara archaeologist, said that evolutionary psychologists have determined that the Mayan language was characterized by expressions that signify an interest in the common good. For example, there is language that conveys how a Maya gardener who noticed that one of his neighbor’s trees was suffering from blight, would try to cure it, even though the tree didn’t belong to him.

What dimension of the ancient world is missing from our contemporary dialogue about sustainability? Tong asked the panel.

“I hope everyone brought tents,” Manning joked, “because we’re going to be here” for a while.”

More seriously, Manning and Ford said that what’s missing now is a sense of community that might offset the individual quest to maximize personal gain. In the ancient world, people were more concerned about minimizing their personal risk, so they were more inclined to pool their efforts and spread the good and bad luck around.

“We think the individual can do whatever they’re legally permitted to do, and push those limits to the furthest degree,” Lane, the Princeton political scientist, chimed in. But the ancients were more cognizant than today’s people of how pushing those limits could impact, or even endanger, everyone.

Lane said we need to think of sustainability not simply in terms of the things we have to give up as individuals in order to hand down a habitable world to our children. Plato asked whether the good life was going to be just eating and drinking to excess, and having our gluttonous intake pass right through us—maybe leading to health problems down the road. The philosopher wanted his readers to see that healthy systems—for individuals, societies, or ecosystems—rely on balance and homeostasis, and that untrammeled growth can upset and undermine these.

The panelists concurred that the obsession with unlimited economic growth is a recent phenomenon, and a damaging one. As Manning emphasized, the ancient world had no conception of needing to grow its economy at three or five percent annually. But some ancient civilizations watched themselves collapse, even as their ruling elites indulged in a wasteful, profligate lifestyle.

“You have to look at your infrastructure” that supports your economic structure, said Ford, who pointed to modern examples of inadequate, underperforming infrastructure, like “maybe the 405 today,” as threats to sustainability.

Some of the ancients’ respect for sustainability was simply acknowledging the limits of their technology, and what they could achieve with relatively small populations. Lane said that past civilizations weren’t necessarily wiser or possessed with more foresight, but they learned through experience not to hit up against natural limitations. Today’s humans haven’t yet confronted the limits of our burning fossil fuels, or realized that we may not always be able to ring up Amazon delivery service whenever we run short of avocados.

“We thought we had more headroom. We didn’t believe we had a limit,” Lane said.

The ancients also accepted the role of supernatural forces in affecting the natural world. They blamed or blessed the gods for the catastrophes they endured and the bounty they received—the size of a harvest, or a river’s seasonal fish catch.

When the discussion opened up to audience questions, one woman asked why
ancient indigenous knowledge has largely been ignored for so long and under-explored by academia. Ford said she strongly believes that most people don’t know or understand much about the Americas—let alone about the contributions of farther-flung civilizations.

Lane agreed that academia still is struggling to recover and assimilate that indigenous knowledge, “and give it full respect and full understanding.” Manning said that, in one nod to indigenous cultures and their veneration of nature, a major river in New Zealand recently was declared to be a person, so it now can bring lawsuits in its own name.

But the question that Tong raised early on, and had hovered over the evening, resurfaced again at the end: How can we start thinking more collectively about how to live sustainably? 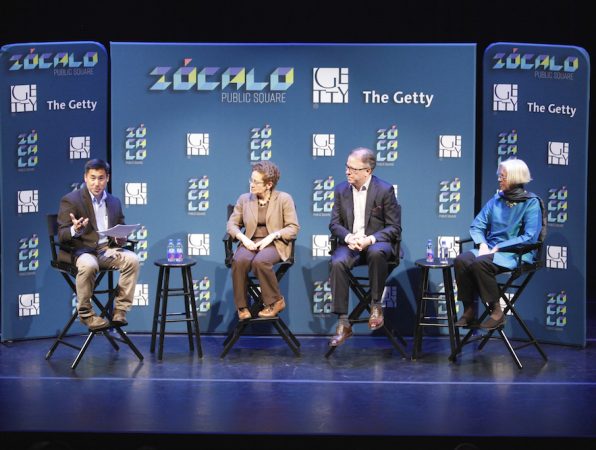 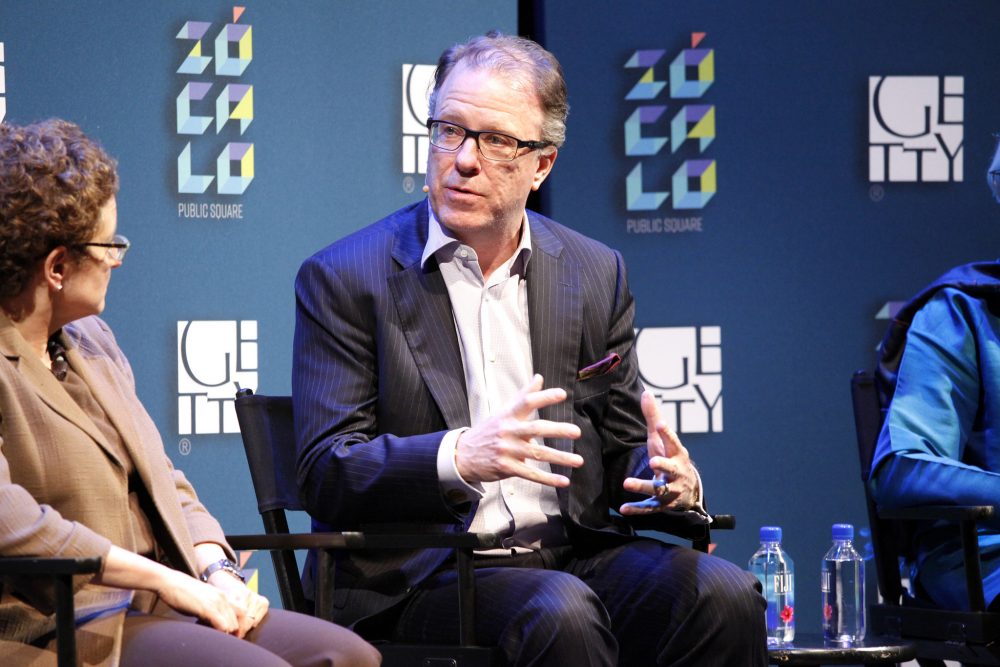 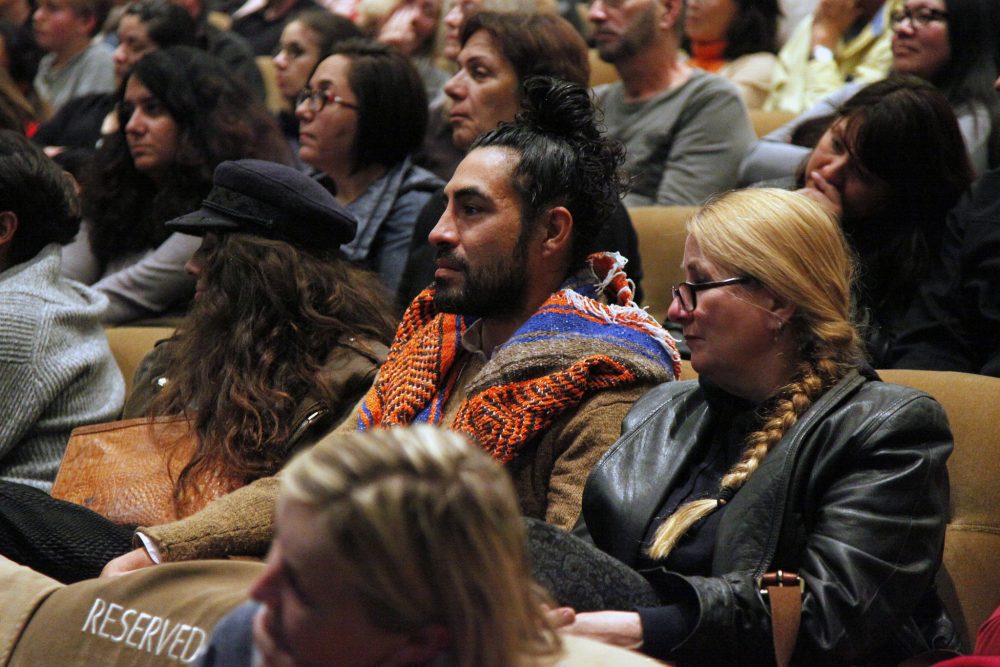 A standing room-only crowd at The Getty Villa 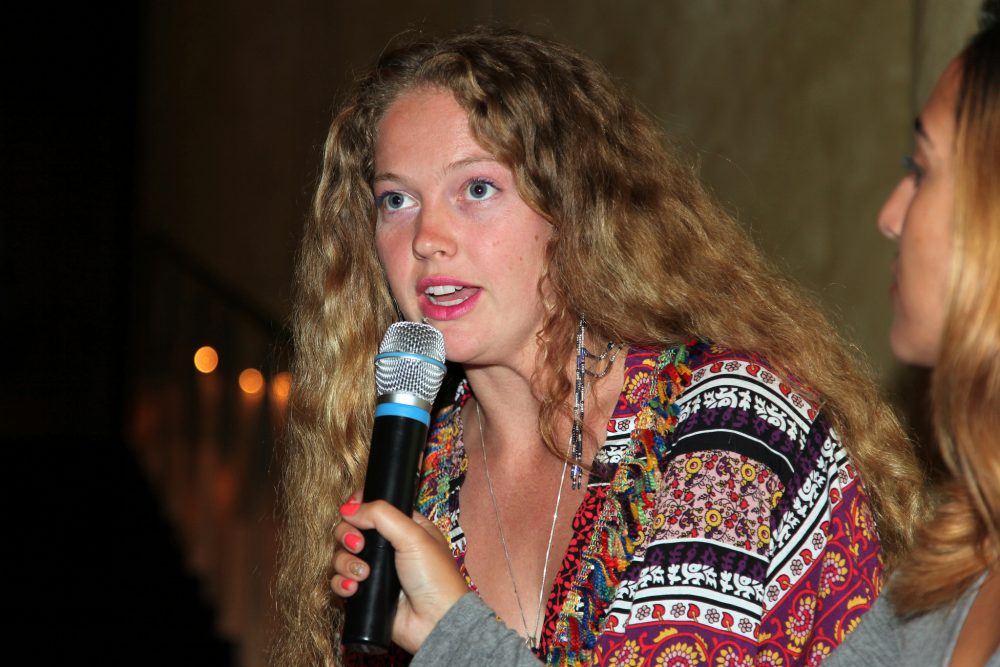 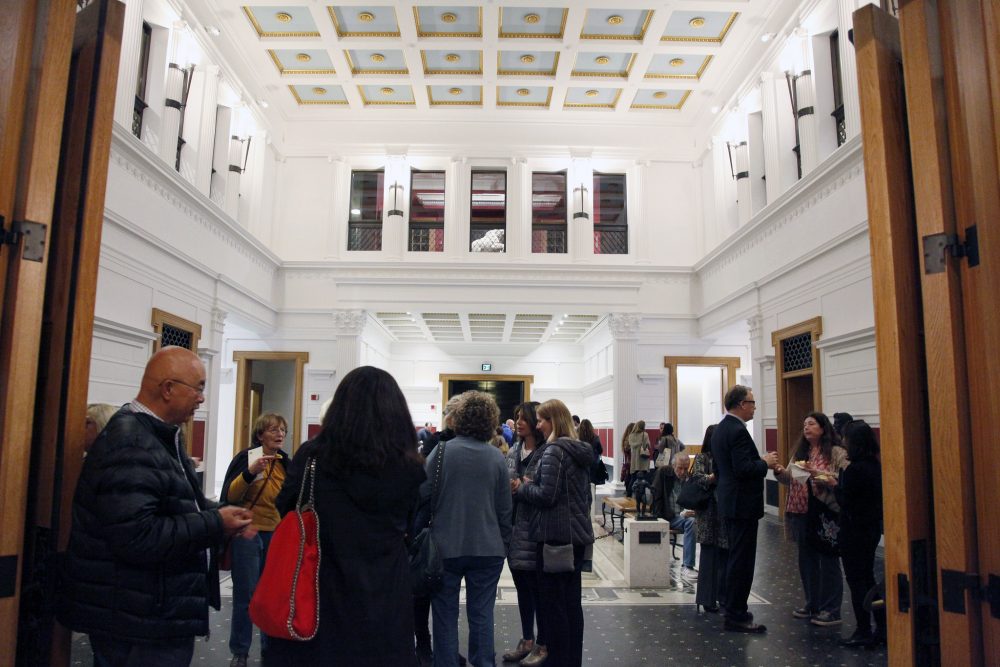 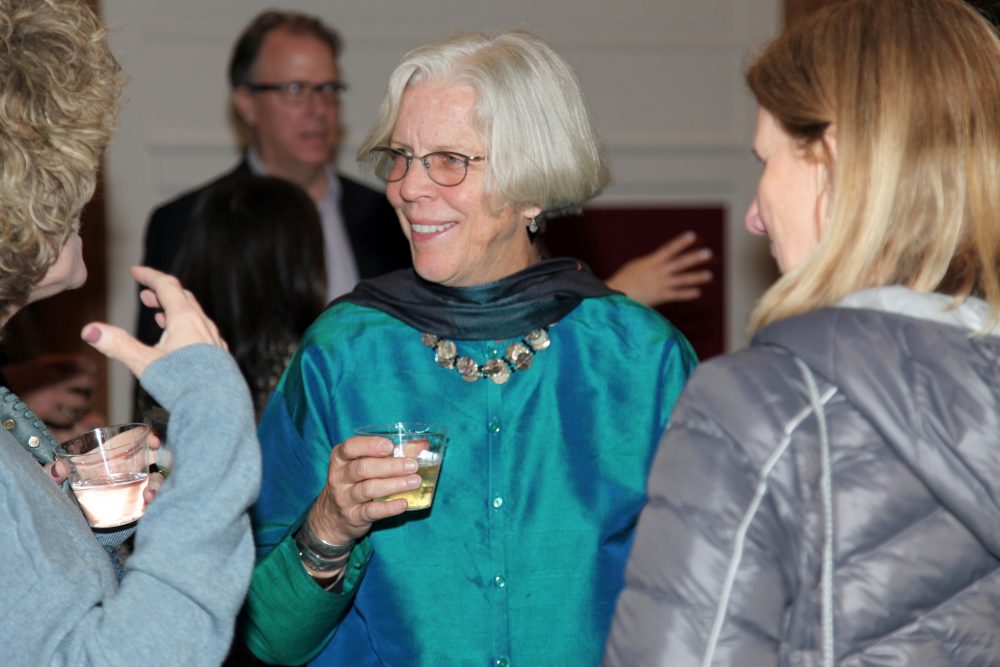