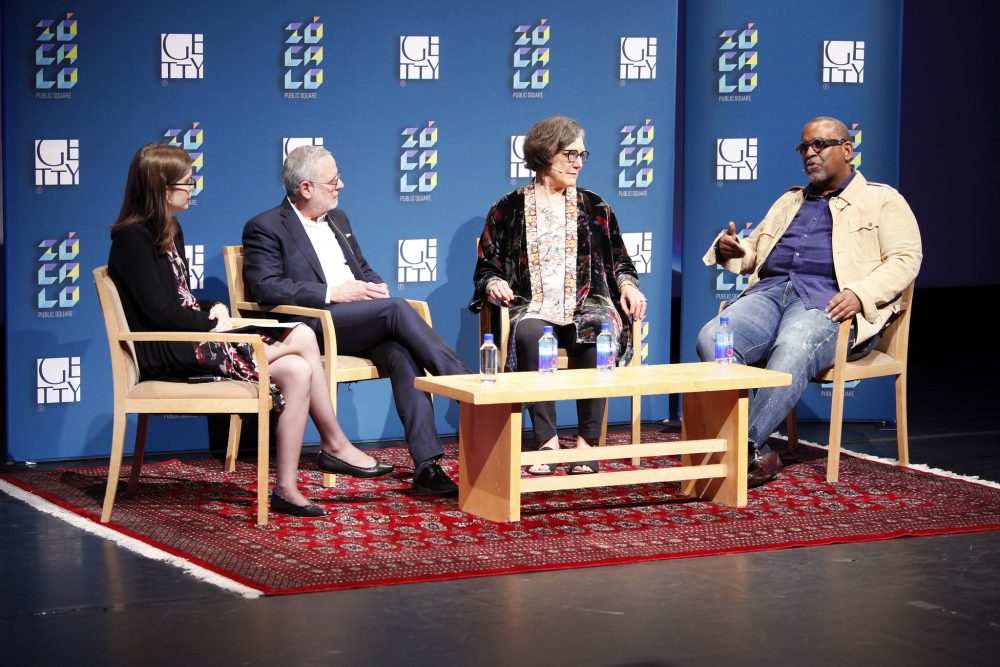 Leni Riefenstahl and D.W. Griffith were cinematic geniuses who churned out racist propaganda. The Renaissance master Caravaggio was a murderous rogue. Then there’s the growing list of Hollywood auteurs and actors whose behavior has spawned lawsuits, police charges, and the #MeToo movement.

Can we appreciate great art that’s made by bad people? A panel at a Zócalo/Getty event tried to unpack that thorny proposition before an overflow audience at The Getty Center.

Moderator Amanda Fortini, a contributing writer to The New Yorker, dove straight into the question of whether there can be any separation between the “man who suffers” and “the mind which creates,” as the poet T.S. Eliot (himself a rabid anti-Semite) once put it.

“We are clearly in a moment of reckoning when it comes to artists and their behavior,” Fortini said, and not only toward contemporary figures but toward bygone ones like the misogynistic Picasso, the abusive Alfred Hitchcock, and the racist Ezra Pound.

One panelist, the cultural historian and film critic Neal Gabler, took up the question first, calling the idea of a strict division between art and morality “totally false.” Our experience of art is a highly individualistic one, Gabler said. It’s up to each individual whether she or he feels unable to watch Roman Polanski’s or Woody Allen’s films, for example, because of what we know about those directors’ personal lives.

“Trying to separate morality and aesthetics is a fool’s mission,” Gabler said.

Picking up the thread, Notre Dame art historian Ingrid Rowland pointed out that, until the 16th century, most artists’ lives, including their moral characters, were shrouded in mystery. It’s only within the last couple hundred years that we’ve had enough information to examine the relationship between the artist’s life and the artist’s work.

USC popular culture scholar Todd Boyd joined the fray by observing that art “is created by human beings, and human beings are inherently flawed.” Consequently, all art will to some extent bear the signature of the person creating it, which can be “very profound” or “quite messed up,” Boyd said, using a raunchier term.

Since our opinions about artworks reflect on ourselves as individuals, and most people want to see themselves as virtuous, that in turn will color the way in which we regard particular artists and artworks, Boyd continued. A bigger problem, he suggested, is when we try to smooth away or deny the moral flaws in a film like Griffith’s The Birth of a Nation, in order to excuse ourselves morally. Boyd reminded the audience that President Woodrow Wilson, an avowed racial separatist, had praised Griffith’s film, with its depictions of heroic Ku Klux Klansmen, as “history written with lightning.”

Even so, Gabler argued, there should be a “statute of limitations” applied to art of the past. We don’t tend to condemn Charlie Chaplin’s assaults on underage girls the same way we do those of 21st-century Hollywood sexual predators, Gabler said. Yet, at the same time, it’s impossible not to engage in a moral reckoning with a film like Riefenstahl’s iconoclastic Triumph of the Will, which eroticized Hitler’s storm troopers and helped cement the Third Reich in power.

At one point, Rowland used Powerpoint imagery to illustrate the sublimely beautiful works produced by the homicidal Italian painter Caravaggio and the Baroque sculptor Bernini, who brutalized one of his lovers.

Caravaggio was “crabby, evil tempered, a snob, a lot of other things,” Rowland said. But he also had a “deep moral sense” and a profound capacity for compassion, perhaps stemming from an awareness of his own monstrous acts. Likewise, Bernini’s sculptures still give solace to those who behold them, centuries later. “This is a heritage that I can’t imagine letting go of just because they were horrible” people, Rowland said.

“I didn’t know we were bringing audio-visual,” Boyd quipped after Rowland was through showing her Powerpoint slides. “I would’ve brought a Kanye video.”

Turning serious, Boyd said that the kind of Hollywood serial abuses that have come to light in recent months have been going on for ages. One reason that such behavior goes unchecked, he suggested, is that the public sometimes confuses actors and other performers with the beloved people they portray on screen—think Bill Cosby and Cliff Huxtable. It’s also possible for men like Harvey Weinstein to combine impeccable tastes with reprehensible actions.

Boyd drew attention to the unequal treatment that’s meted out to performers and artists of color, whose sins are often punished more severely than those of their white counterparts. Roman Polanski was able to flee the United States to avoid charges involving sex with a minor; incarcerated black and brown men don’t have that option, Boyd said.

“We have not judged, and we will never judge everybody the same way, because of certain differences in our society,” Boyd said.

Gabler said that recent revelations about abusive behavior in the film and TV industry have been “a good corrective.”

“Men in Hollywood are shaking in their boots, and they should be,” he said.

Still, Gabler proposed that knowledge of an artist’s personal proclivities might allow us to glean useful new insights from their work. Maybe the next time we watch Woody Allen’s Manhattan, for example, we’ll look differently at the character of the high school student played by Mariel Hemingway—and the queasy relationship she’s involved in with the character played by the much older Allen. The not-very-reasonable alternative, Gabler said, would be to simply obliterate the film entirely.

In the end, the panel couldn’t agree on Fortini’s question about “where to draw the line” on moral behavior that is so loathsome it effectively keeps us from appreciating the art itself.

During the Q&A session, an audience member asked whether she should strike the works of a novelist accused of sexual misconduct from her teaching syllabus. Rowland, who earlier had acknowledged that Polanski had endured terrible ordeals as a Holocaust survivor (and later with the murder of his wife, Sharon Tate, by the Manson gang), ventured that we need to see the art and read the writings even of terribly warped people, if their work holds value.

Another audience member, art critic Edward Goldman, said that he had been mesmerized when he first saw Riefenstahl’s movies. “The gods give talent to people who seemingly don’t deserve it,” Goldman said.

What’s different about judging the morality of today’s art versus yesterday’s art, Boyd concluded, is that we now can access so much information. That gives us more facts for making moral judgments—but it still doesn’t tell us how beauty can emerge from a misshapen soul, and how we should feel about it.

“To me,” Boyd said, “when you consider the magnitude of any creative individual, it’s important to realize that all these things can be true at the same time.” 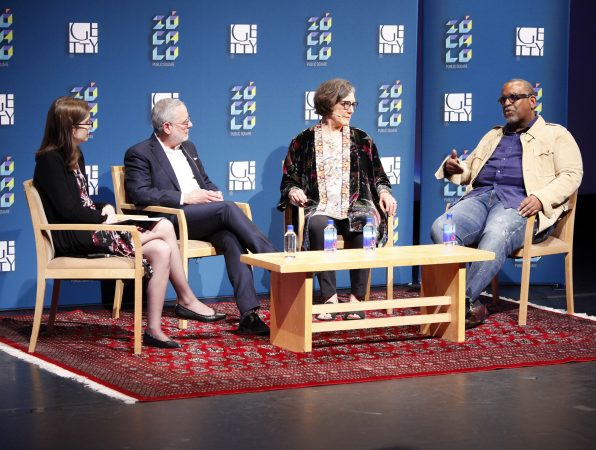 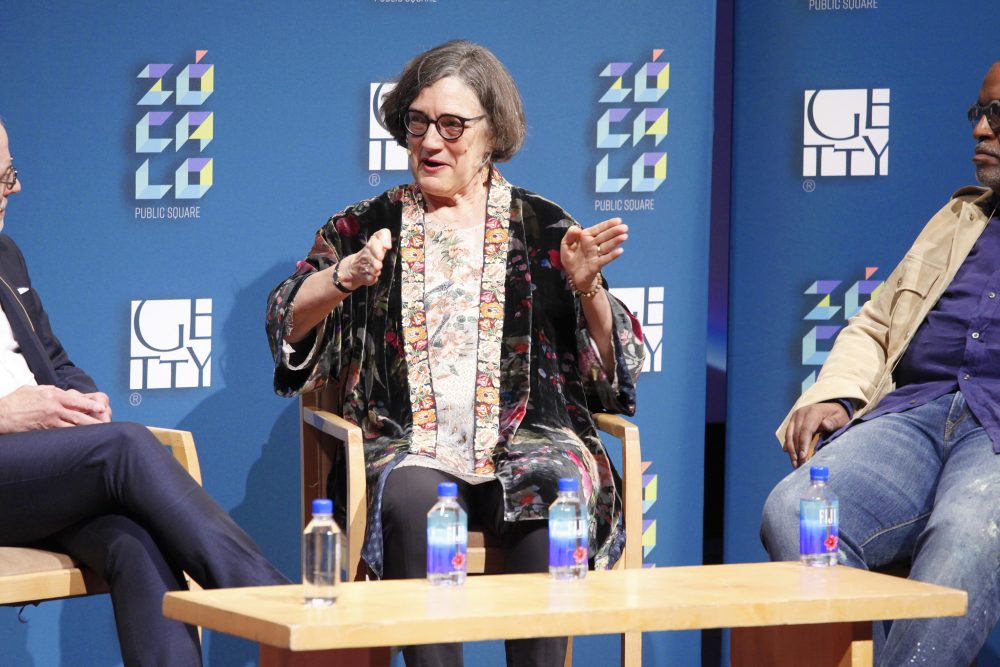 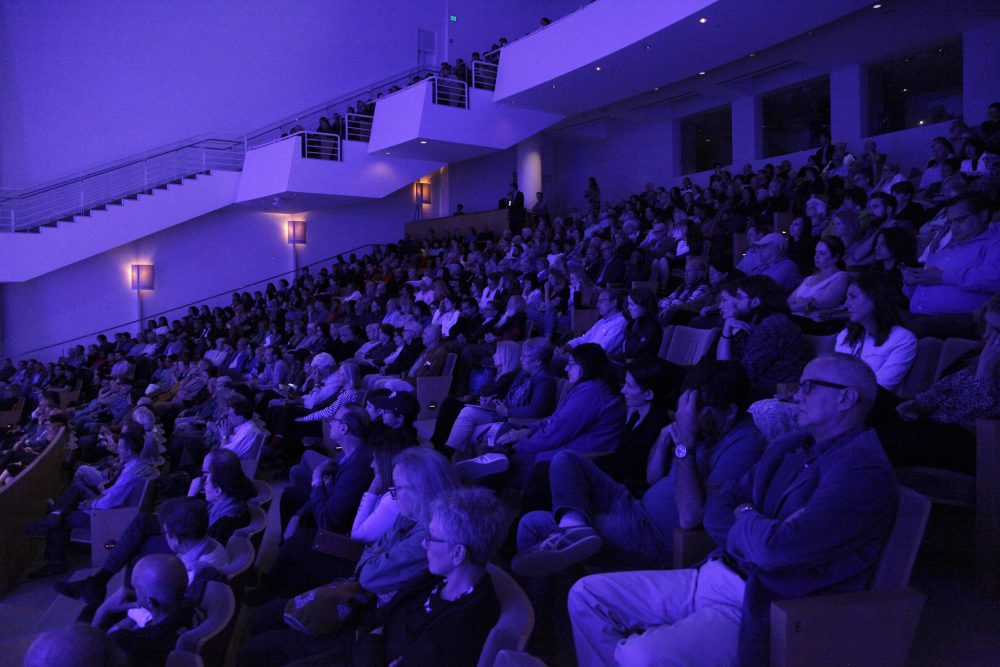 A standing room-only crowd at the Getty Center. 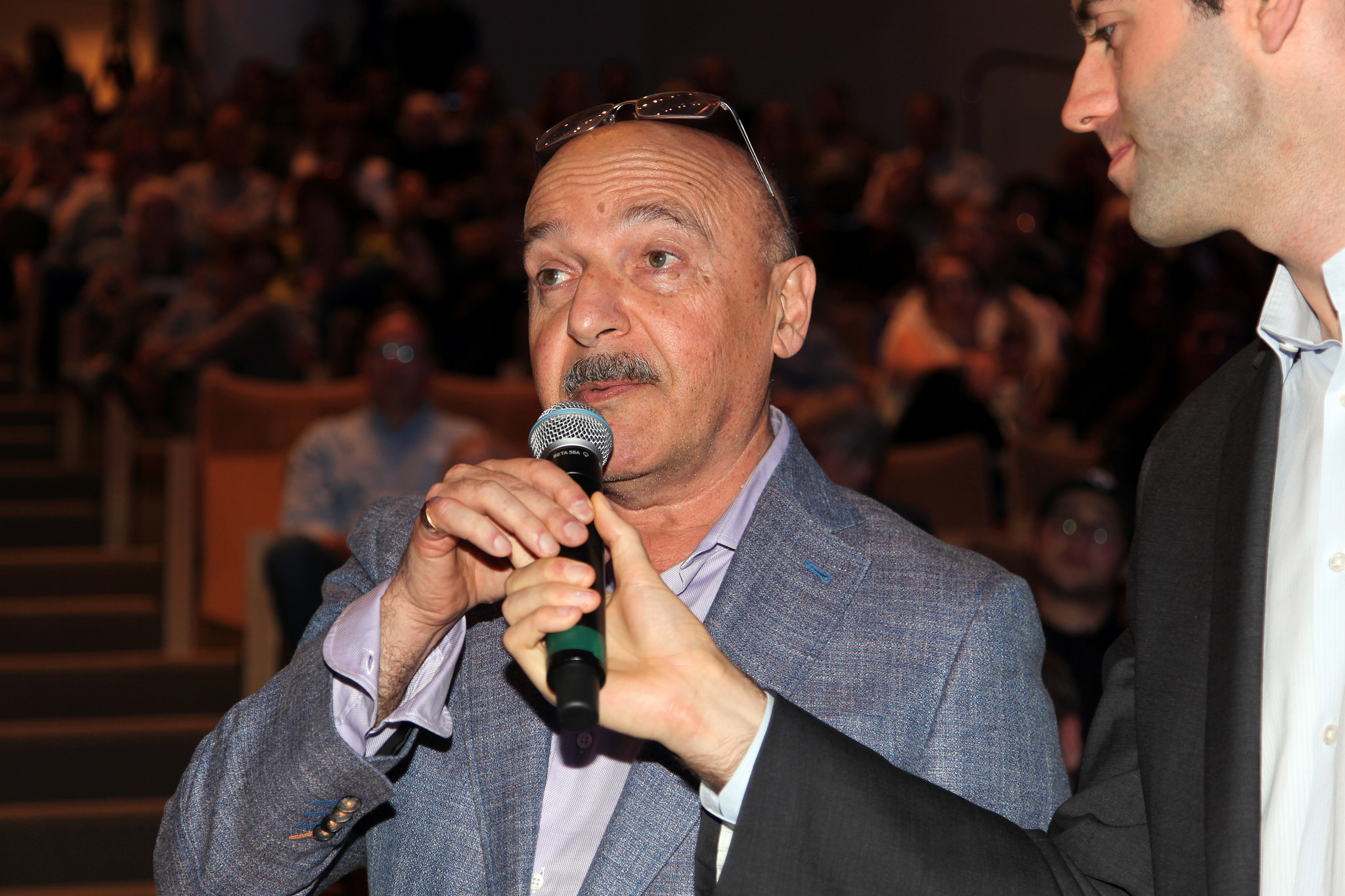 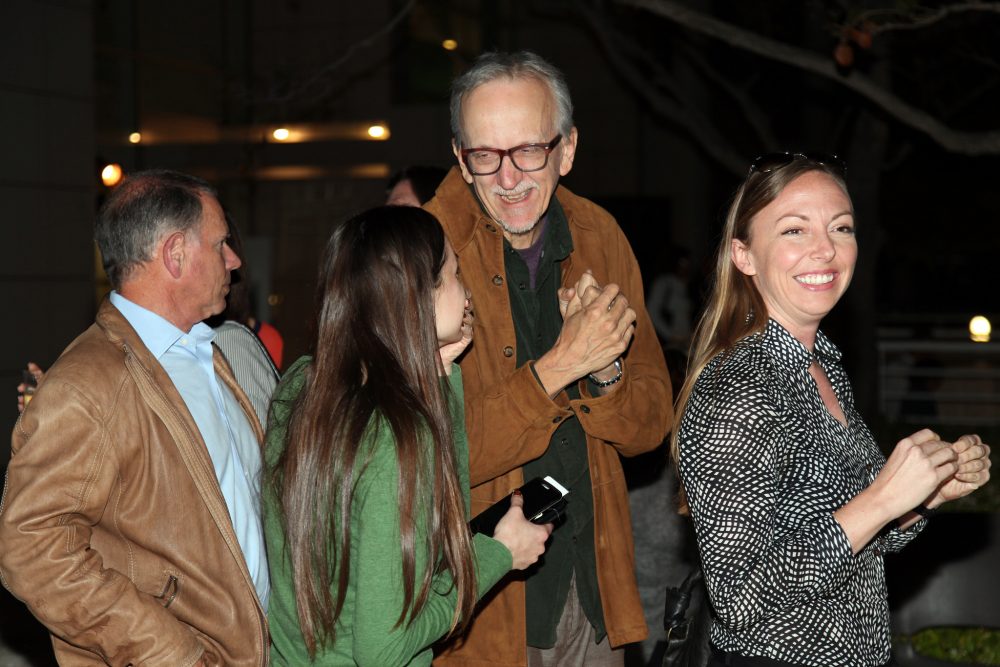 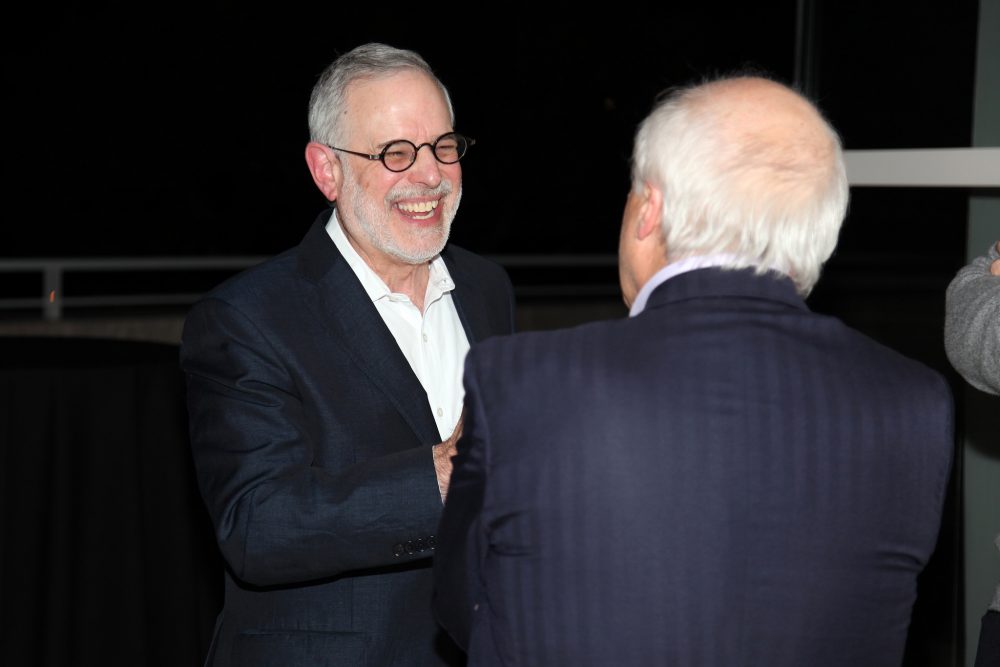 Neal Gabler, cultural historian and film critic, speaks with guests at the reception.