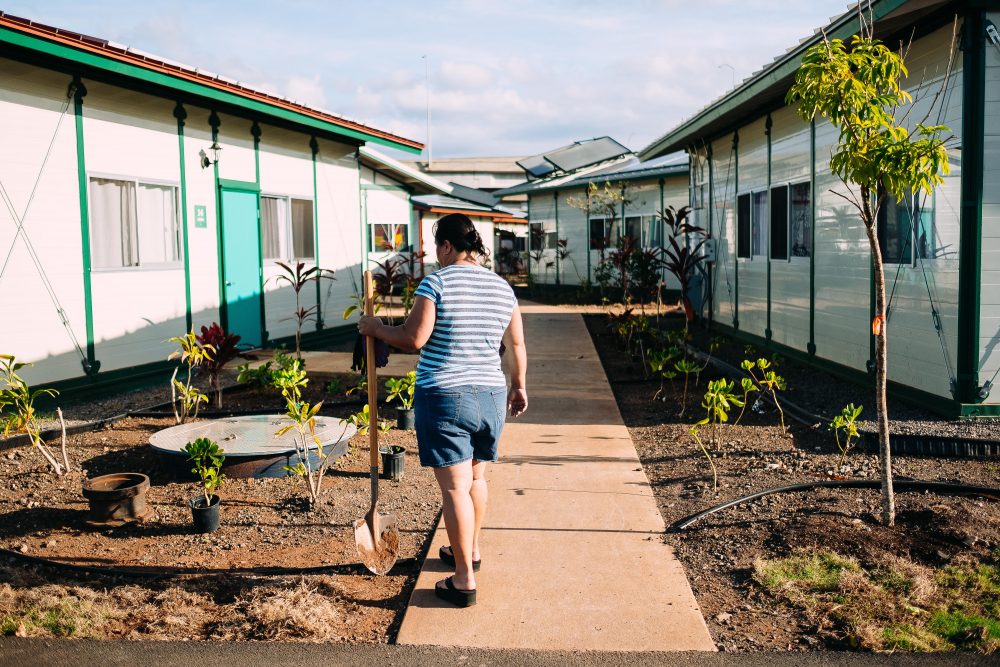 My father always said that you get out of life what you put into it. But I believe that people like me, who grew up in a sugar plantation town, were blessed with a whole lot more. The plantation era was a special time in a special place.

Our lives back then shaped who we are today: It was about how we conduct ourselves and how we care for others, rather than how much money we make. Trust and responsibility weren’t just virtues that we strived for; they were a way of life.

While the plantation days and plantation towns are now long gone, we built Kahauiki Village to try to rekindle the spirit of those times and the soul of those towns to help solve one of our most difficult issues: homelessness.

Whether you’re a successful executive or someone without a roof over your head, you still share the need for dignity and a sense of community. As a community of single-family dwellings and duplexes, each with their own kitchens and bathrooms for homeless families with children, Kahauiki Village aspires to have that as its core. With an outpouring of support from people throughout Oahu, we broke ground on July 7, 2017.

Upon completion on January 12, 2018, as we gathered to welcome Kahauiki Village’s first families, I noticed a mother holding her son nearby. Instinctively I reached out and asked him to “come to Uncle.” As I held the boy in my arms and looked into his eyes, I saw myself. And I saw my brothers and sisters, my mother and father, my friends and all the others who grew up in the plantation towns of yesteryear. Our homes may have seemed shabby even by local standards, but they were our castles and we lived in our communities with pride. We had hope and we had the opportunity to dream big. 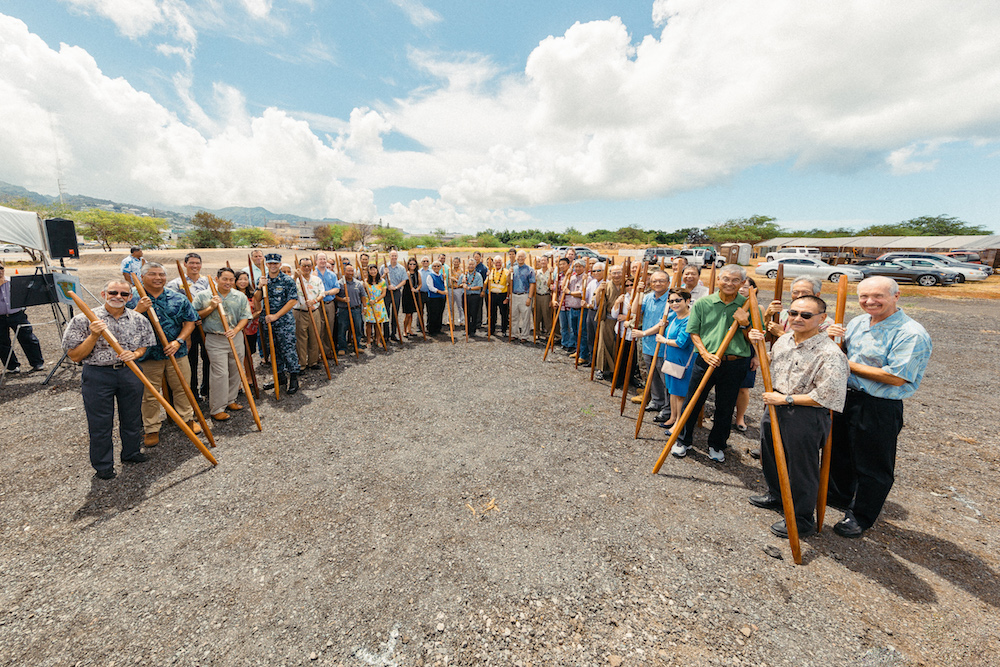 That kind of upbringing was the inspiration for Kahauiki Village. At Kahauiki, we, the many stakeholders in the project, including contractors, supply houses, engineers, the state and city governments, and the homeless themselves, believe that a sense of community should be the starting point in addressing the day-to-day needs of those seeking comfort and shelter, and for providing long-term solutions for homelessness. This too can be a special place, fostering a sense of self-worth, self-reliance, and responsibility, where respect and civility are cherished values.

In imagining and designing Kahauiki Village, we created a community reminiscent of the plantation towns. We built a child care center and a preschool allowing parents to go to work. We built a convenience store operated by a trusted local market. We built a police rest station, a laundry facility, an onsite management and social services office, and community gardens for parents and children to grow their own vegetables. And as we complete our second and final phase, we will build a community recreation center and a playground. When we’re done, Kahauiki will house 54 percent of the homeless families on Oahu who currently are in transitional homes, according to projections by the Institute of Human Services.

It wasn’t easy getting Kahauiki Village off the ground. In the beginning, while we were still in the design stages of the project, we intended to do our diligence work under the radar. Our plan was to anticipate any obstacles and risks, design the village concept, and have a solid plan to pay for everything before we moved any further. Yet we also knew that all of this would be academic unless we removed the cost of the land from the equation. So with the support of the State Department of Land and Natural Resources, we petitioned the State’s Land Board for a dollar-a-year lease on an 11-acre surplus parcel at Keehi Lagoon. When our request was included on the docket for its scheduled hearing, the curtain was lifted. Our activities became public. Now we were open to public comment and media inquiries. There was no turning back.

Once Kahauiki Village went public, our path was clear: We had to stand together to see the project through to completion. In a close community like Hawai‘i, character and reputation are everything. Our state has long suffered fast talkers who bring in big ideas and leave behind nothing but lost dreams, bruised egos, and empty pockets. All talk and no follow-through—certainly we didn’t want to be tarred with the same brush, and so we committed to move forward together, at all costs.

We had started as a group of friends who wanted to build a housing project for homeless families, pro bono. But as our dream grew bigger, the time frame for execution grew shorter. Our project quickly became a design/build initiative, which means that we were designing and building the project at the same time. 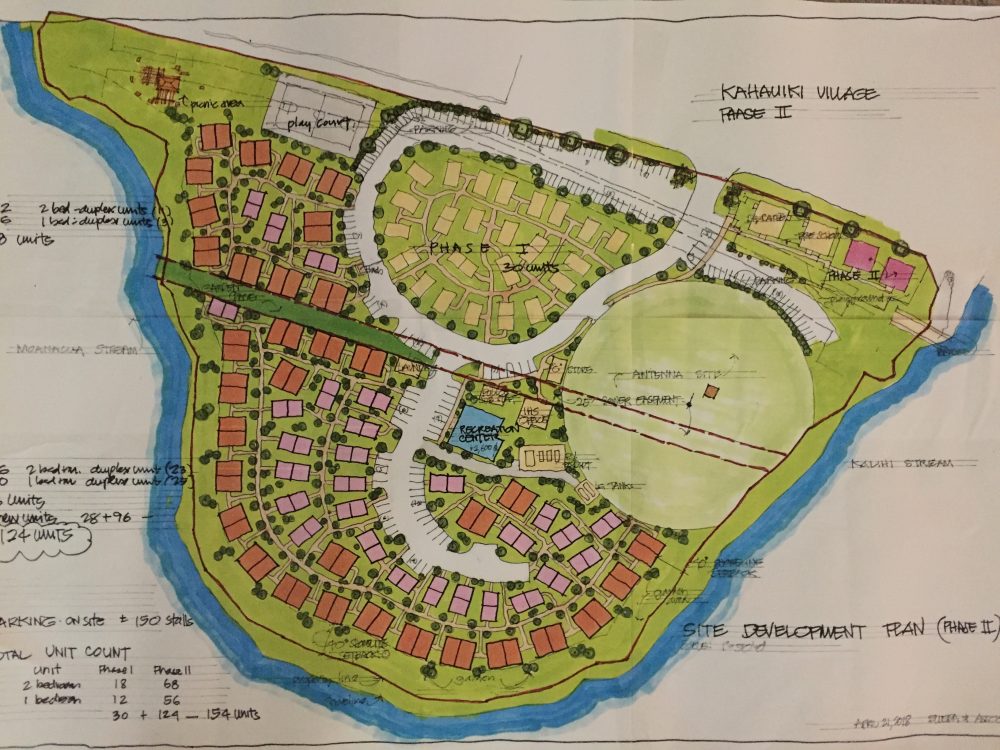 Gov. David Ige’s emergency proclamation in 2015, which allowed for building without permits to address the growing homeless population, included Kahauiki Village, its first non-government entity, as an exempt project. Armed with this untested executive order, we moved ahead, still uncertain of the development’s ultimate price tag. As the project’s leader, I accepted personal financial responsibility for building and completing Kahauiki Village and, as a result, I now felt the burden of the other participants’ reputations as well. It was a lonely and scary time.

But I soon realized that I was hardly alone. Every member of our founding team unselfishly invested inordinate amounts of energy and resources and enthusiastically bore a share of the burden. We were all in—together.

For me personally, it was a deeply emotional time. Life became a mix of great anxiety and tears of gratitude, as more and more people embraced our vision and joined our cause. Clearly, we were onto something. As the keeper of that vision and convener of stakeholders, I fought to overcome my fears of inadequacy, while following the compass of my heart to do the right thing regardless of cost. Together, unified in action, we found we trusted each other to the point where everyone could call their own shots. Miraculously, even as we worked independently on the many moving parts, we rarely stepped on each other’s toes.

But the “miracles” were just beginning, as many critical pieces began falling into place. From the beginning when we initially sat down to negotiate the terms of the ground lease with the city, we set up an informal partnership with key members of the city and county administration and continued to meet regularly to help navigate bureaucracy, interpret building code issues and state and city laws on the fly, and coordinate our responsibilities. This team enabled the design/build process to move so quickly that we sometimes had to ask the city to slow down! Still, as transparency and integrity became the hallmarks of this partnership, it seemed that nothing could slow us down for long.

When we determined that millions of dollars would be required to bring sewer and water services onto the property from nearby Sand Island, Mayor Kirk Caldwell agreed to step in and fund those connections.

Gov. Ige and Gen. Kenneth Hara mobilized the Hawai‘i National Guard to help with vertical construction of the homes.

We lowered costs and simplified construction by importing used emergency housing from Tohoku, Japan. With local materials and island design touches, these structures were then dramatically modified to achieve a Hawai‘i plantation-home feel. 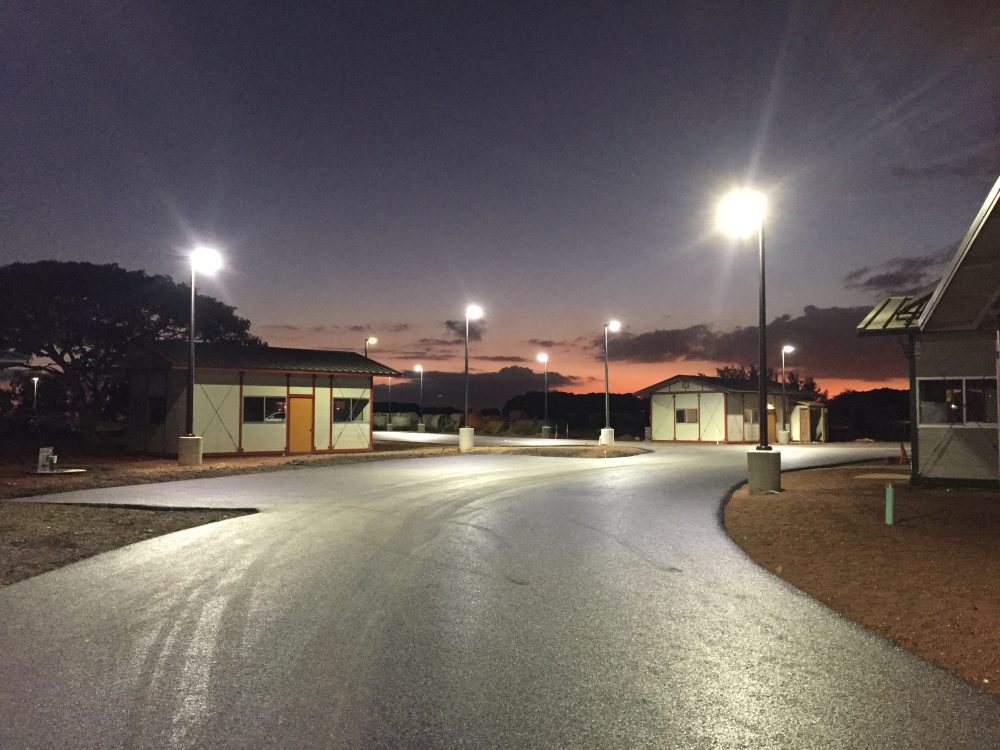 This meant changing the foundation from post and pier to concrete; changing the structure from a flat roof to a pitched roof that required trusses; installation of high-quality standing seam roofs to allow for solar panels to be secured with clips rather than having to puncture the roof; installation of metal framing and drywall to separate the rooms; insulation and a ceiling system in each home; changing the doors to meet code; building concrete landings; and putting in stoves and refrigerators and cabinet systems in the kitchen, and water closets, showers, and stand-alone sinks in the bathrooms.

Early on, businesses within walking distance of the development came forward to offer job training and employment to any adult from Kahauiki Village who needed work. Since the project is self-sustained by tenants who pay rent, every household must include at least one working adult.

In addition to facilitating employment with our new child care center and preschool, a regular city bus stop was installed right in front of Kahauiki Village. An elementary school is within walking distance.

InSynergy Engineering and PhotonWorks designed a power system so that Kahauiki Village can operate completely off the grid. Because electricity is included in each household’s rent, the photovoltaic system will help control the cost of power now and in the future.

Local agriculture leaders brought the Future Farmers of America to Kahauiki Village and are working together with the organization to build community gardens. Our goal is for every family to maintain a garden plot to grow their own vegetables.

Almost every day, new contributors—people from all walks of life—step forward to embrace our vision in some new way, helping to enhance the lives of those who call Kahauiki Village home. This is Hawai‘i at its best. 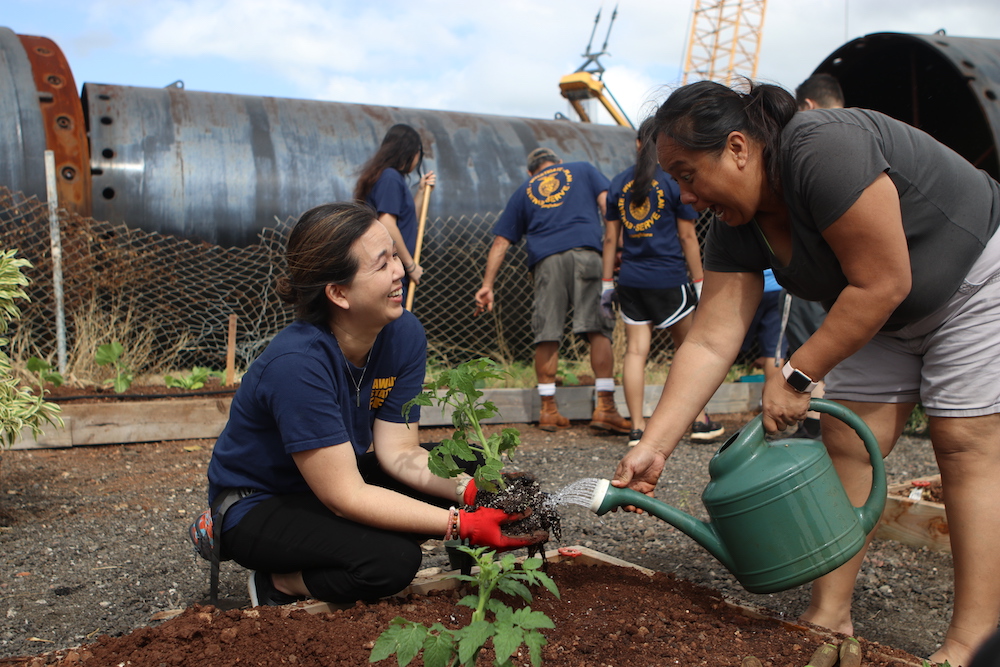 Everyone who has touched—and been touched by—Kahauiki Village, whether they built the homes, laid the pipes for the sprinkler system, planted grass and trees, or cleaned the floors, can feel proud. We started and finished Kahauiki Village in six months. Some 70 percent of the total cost of the project was funded by donations of cash, materials, and labor. And none of the core work of Kahauiki Village was done with construction contracts. It was all by commitment through handshake, something none of us have done before with this magnitude of work.

Families have quickly taken pride in and responsibility for the privilege of living in Kahauiki Village. There are 126 adults and children who currently live in Kahauiki who have formed a community association, which is taking initiatives with yard care, in coordinating adult escorts for children walking to school, and more.

Of course, Kahauiki Village isn’t a blanket solution. Elements like the home layouts, the working parent requirement, the child care center, and the preschool are applicable primarily to a community for homeless families with children. Homeless people affected by drug use and mental illness, for instance, as well as homeless youth, may need smaller quarters and shared kitchens, not to mention an extra investment in social services. Still, the lessons of Kahauiki Village—building community, removing the impediment of land acquisition costs, entering into public/private partnerships—can be essential tools for addressing the overall issue of homelessness.

It is our hope that others will use this template, which will certainly be easier to follow without the need for breaking new ground. Addressing homelessness is everyone’s responsibility, not just government’s. For our state to reach the heights we know are possible, we all need to rise together—the fortunate and the disenfranchised, the rich and the poor and the in-between, the power brokers and those who feel powerless. Sharing comes naturally to us in Hawai‘i. If we put our heads and hearts together and work toward a clear common goal, we can achieve almost anything.

Those of us who grew up on the plantations are indeed fortunate in our heritage. But then everyone who calls Hawai‘i home should be considered fortunate. That’s the spirit of this special place and its people. And that spirit is ours to share.