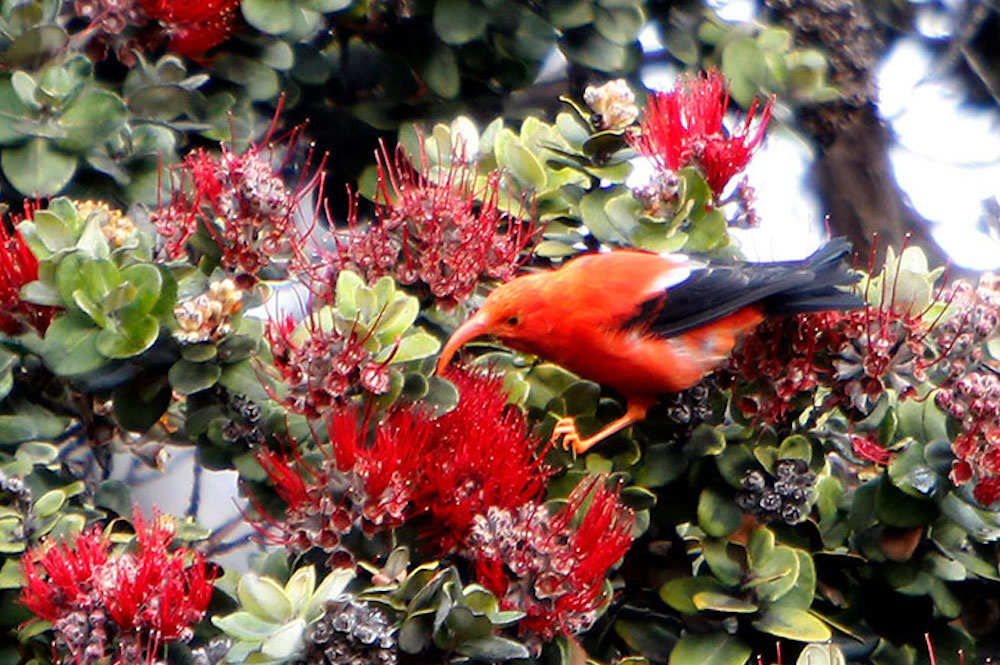 The ‘i‘iwi, or scarlet honeycreeper, sits on an ʻŌhiʻa tree. Courtesy of NPS Photo/Michael Szoenyi.

I was born in the Territory of Hawai‘i, three weeks before statehood. As a kid I played in its dirt, ran around in the rain (my hometown of Hilo is one of the two or three rainiest cities in the United States), clambered up trees and vines, and swam in the spectacular ocean waters.

I was of the islands; yet I was not. My dad was from Chicago and my mom from Salt Lake City. Certainly, if anyone had asked me, I would have replied that I was a native—after all, I had kama’aina status—someone born there, literally “child” (kama) “of the land” (‘aina).

But then I wrote a book about the extinction and evolution of birds in Hawai‘i, including feathered immigrants from other lands as well as ones that had been resident in the islands for thousands of years. I also wrote about their status as natives, or not native. And in writing and thinking about birds, I felt a responsibility to investigate just what claiming native status actually has meant for humans on these islands as well.

In doing so, I stirred a great big muddy pot of understandings and misunderstandings about just what it means to say something or someone is a native of a place. It also got me to thinking differently—and more broadly—about what it signifies to claim native status.

Nativeness isn’t a fact, but a spectrum. Nativeness is a quality, I would argue, that is somewhat alchemical: influenced by scarcity or abundance, length of residency, charisma, evolutionary change, and usefulness to others. I say this despite protests from biologists who work from a traditional definition: A native is something that got to where it is under its own power—it flew, crawled, walked, wiggled, or otherwise arrived without any human help or agency. If something was brought by humans, then it’s a non-native. To many scientists, that bright line—around humanity—is the only line that matters. And so every living thing that did not involve human agency can be classified as a native, and everything else is introduced or downright invasive.

But the state of my birth reveals some problems with this notion. Everything in Hawai‘i comes from somewhere else, regardless of its route to the archipelago. Smoking volcanic rock rose out of the oceans between 400,000 years and nearly five million years ago, depending on the island, and everything living had to come to it. Even the word “lava”—the rooting force of the islands—is not of the islands; it is an Italian word.

The opposite of “under its own power” is “brought by humans.” Yet the pigs that came by canoe with the original Polynesian settlers of Hawai‘i—the pua’a—are a powerful symbol of nativeness in some corners of Hawai‘i; the pig’s name even appears in that most Hawaiian of land tenancy units, the ahupua’a—the wedge-shaped pieces of land that marked the political, economic, and cultural boundaries of every island. Each of the boundaries of the ahupua’a had an altar of stones topped by a carved pig’s head, and the altar was saturated with native rituals. The Hawaiians also had a mischievous pig-god—kamapua’a—that could take either human or pig form. Pigs—tasty, short-tempered, and with razor-sharp tusks—have been cultural icons in Hawai‘i for a millennium.

Another way these traditional notions of nativeness are overturned is via a biological route: evolution. Every living thing is in the act of turning into something else.

It’s been well established that some bird species in Hawai‘i, introduced by humans but having been there for between 100 and 1,000 years, already have evolved into something unique to the islands. The common myna, for example, has experienced sufficient evolutionary change that it is now genetically different from its Asian cousins. The red-vented bulbul, in Hawai‘i for decades, now appears quite different from off-island congeners. Even the lowly house sparrow in Hawai‘i has demonstrated rapid differentiation over a hundred generations since its appearance in the 19th century.

When the myna arrived, changes in environment meant changes in behavior and resources, which led to natural selection, which led to evolutionary change—something that’s been taking place over shorter periods of time than evolution has been traditionally thought to occur. And change means that something becomes identifiably, morphologically, of a place. It’s our myna now.

Everything in Hawai‘i comes from somewhere else, regardless of its route to the archipelago.

As human beings, we form bonds with the plants and animals around us as they become part of our backyards, our weekend jaunts, our dinner tables and birdfeeders. They move in, as it were. And although some introduced species have been undeniably damaging because they compete with other organisms that have had a longer tenancy, others seem to have taken up residence in our yards as well as in our hearts. As writer Michael Pollan asked in a 1994 article in The New York Times about some species of introduced plants in New England, “Shouldn’t there be a statute of limitations on their alien status?”

This is not only a symptom of human emotion, but also of biology. Isolated populations, like humans, begin to change when they’re somewhere new. Monarch butterflies on the Big Island have a much higher incidence of albinism. Brush-tailed rock-wallabies on O’ahu are an important and distinctive population, different from their Australian mates. Does this make the house sparrow native? Well, kind of, it does, although most people in Hawai‘i would find that idea repellent. Perhaps it’s native in the way that I am also a native: birthed in the land, knowing no other home (in my case, until adulthood), and influenced by all of Hawai‘i bearing down on me, via the wind, sky, seas, geology, and my fellow residents.

Native status in Hawai‘i for humans is also confounding. In 1921, Congress passed the Hawaiian Homes Commission Act, in response to the declining populations of Hawaiians, many of whom had been forced to relocate from ancient homesteads because of commercial real estate pressures. The Act created a land trust comprising 200,000 acres, exclusively for use by those who could prove that they had at least 50 percent Hawaiian ancestry. But the system doesn’t work very well, for a variety of reasons.

For purposes of claiming publicly trusted land and to reap other benefits in the islands, the Office of Hawaiian Affairs will designate you as native Hawaiian (with a lowercase “n”). If you have some Hawaiian blood, but less than half, you’re a Native Hawaiian (with an uppercase “N”). As bloodlines have thinned in the last century, though, fewer and fewer people have been able to claim native status—excluding descendants of people who did qualify for homestead lands. And despite the precision required to claim that preferred, lowercase “native” status, the documentation required is not precise at all: People cart in photo albums, documents, scraps of family tales passed down, and other potentially questionable archival evidence of long tenancy in the islands that predates the arrival of Captain Cook.

I find this highly problematic. Not all bloodlines were considered equal even in ancient Hawai‘i. Various tribes and groups in the islands were often at war over issues of rulership, rebellion, island succession, and the right to control land, and genealogists on both sides of a conflict were “always busy exalting the purity of their champion’s bloodlines, and deriding the mean ancestry of the enemy,” writer Gavan Daws has noted. There were strong distinctions between commoners and those of royal blood, with many strata of status, and ancient Hawaiians had a caste system that provided various pedigrees and ranks, including leaders who could trace their ancestry back to the gods.

For these reasons, I don’t think the purity test holds up today, either for birds or for humans. People have various synonyms for being of a place. For instance, you hear the word “local” in countless contexts in Hawai‘i: a “local” boy; “local” food”; a “local” custom; all are “from” the islands, or “of” the islands, and in some seemingly immutable way. Once you’ve secured local or native status, it doesn’t seem revocable.

But again, things start to fall apart upon trying to pin specific examples to nativeness of some kind. Manapua, the Chinese-influenced, sweet pork-filled buns? Kimchi, the pickled Korean food? The loco moco, which consists of an egg over a hamburger patty and rice? All are typically described as “local” in the islands. But they’re from somewhere else, or a modern mashup, conditioned by the intense and longstanding cultural vectors that have passed through Hawai‘i. They’ve earned their reputation as local through affection, habit, and cultural inclusion. Purity as a notion is overrated, and over.

The other aspect of nativism in Hawai‘i, and everywhere, is that time changes everything. Even the most invasive, landscape-changing species will eventually, with a long enough arc into the future, modify, assimilate, and settle into a particular role in an ecosystem for which it will then be uniquely suited.

Today becomes tomorrow becomes another millennium. We will resist the so-called non-natives, and understandably, because of the risk of unintended consequences and the norms they upset. We will contemplate, guiltily or not, their eradication from our established ways of life, or we will rage against them. We will breathe a sigh of relief when they seem to assimilate without causing a commotion. And far in the future, as the spring of time’s clock unwinds, they will be a part of us that we can’t live without.