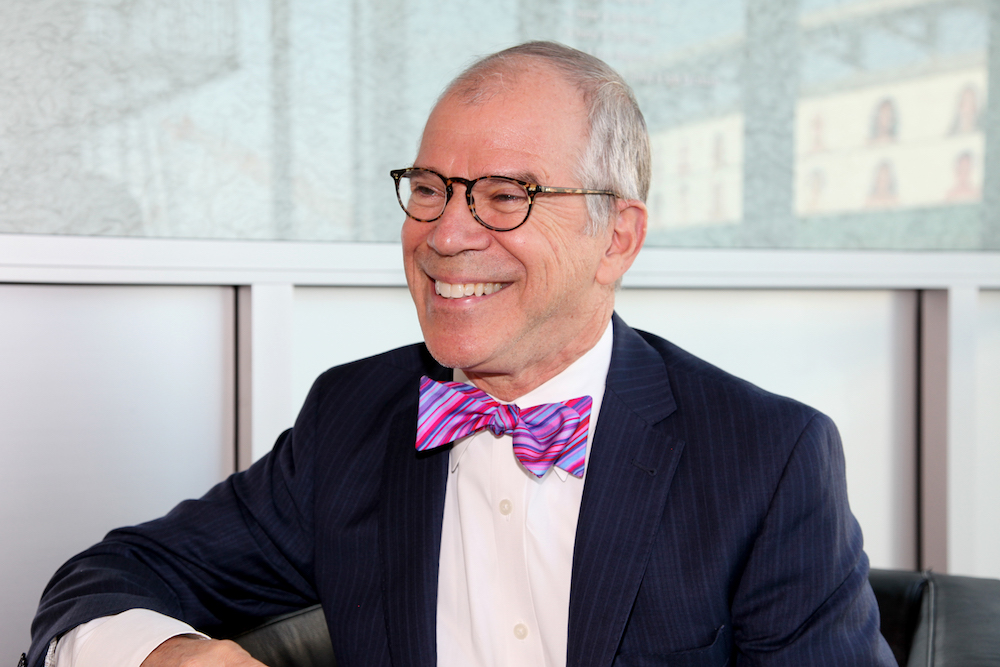 Dean Hansell is a Los Angeles Superior Court Judge. Before taking part in a Zócalo/The California Wellness Foundation event titled, “What Are the Social Consequences of Racist Anti-Immigrant Rhetoric?” at the National Center for the Preservation of Democracy in downtown L.A.’s Little Tokyo, he chatted in the green room about his passion for books, how he celebrates Seder, and grumpy judges.

I do! Divided by color. And I’ve got a handful that are thematic. I have one that’s the judicial scales, for example, and I have one from my undergraduate school and my law school. I belong to Phi Beta Kappa and they sent me a bow tie.

Do you only wear bow ties? Do you own any neck ties?

I kept some of the old-fashioned ones. That way, when I would go to court, if I was worried I’d have a grumpy judge—and now I realize that the only grumpy judge I might encounter would be when I look in the mirror!—I still have them, but I’ve been slowly giving them away to people.

Are you reading anything for pleasure right now?

I just finished reading American Romantic, by Ward Just. It’s a wonderful book, just very elegantly written. So I’m going to pick up [another of his] books. And I read, before that, Manhattan Beach [by Jennifer Egan], which takes place in the Brooklyn Navy Yard in World War II. And it was an engrossing book. I read non-fiction also. I’m halfway through Erwin Chemerinsky’s book on the Supreme Court, I’ve read a book by Sandra Day O'Connor on the Supreme Court, and I’ve read some other ones as well. I’m actually on [the board of] the Library Foundation, so books are one of my passions.

Was there a particular teacher or professor who really influenced you?

There was someone who influenced me in life. I went to a small liberal arts college in Ohio, Denison University. I had a religion professor named Walter Eisenbeis. He was [from] Germany, he actually had been briefly in the German tank corps during World War II. And he fled Germany, went to Canada, worked in a steel mill, came to the United States and got a Ph.D. at the University of Chicago. And as a German from that time he was, as you can imagine, somewhat ostracized from people. He began a correspondence with Abraham Joshua Heschel, who was the [theological] successor to Martin Buber. Heschel really reached out and provided a lifeline to Eisenbeis. So I took several courses from him, one that was just on the books of Heschel. And it really sort of inspired me, just on social justice, but doing it really from the prophetic tradition. I was really trying to understand what it meant to be Jewish, and, based on that, how am I to respond to the world, how am I to respond to issues and injustice, poverty, hunger, and how to take inspiration from the history of the Jewish people. And [beyond] identifying with the Jewish people as a whole, to think about what does that mean for me that I may be doing things that my parents did, my grandparents did, etcetera…. So you’ve got those issues, but also familial ones. I host Seder every year at my house for about 25 people. And I think about why am I doing this work? It’s a headache and I’m a lousy cook. Why would I do this? And an answer is, because my parents did it, their parents did it, their parents did it, and so on, and so it creates this link in time between me and all of them. And it’s really kind of cool. So a lot of that came from the work I did with Dr. Eisenbeis.

If you could time-travel, where would you go?

I would go back to early Los Angeles. I didn’t grow up here but I’m fascinated by the history of the city. It’s the most diverse city in the United States. It went through a period, I would say starting in the 1950s, when the past was irrelevant; they couldn’t knock down buildings fast enough and, I think, lost quite a lot in the process. And I would’ve been fascinated to go back before that to understand the people, maybe to the 1700s and 1800s, and certainly before when a lot of the people from where I came from, the Midwest, came out here. It was very diverse, very progressive, you had Latino mayors, and certainly the Jews from that time were very much a part of the fiber of Los Angeles.