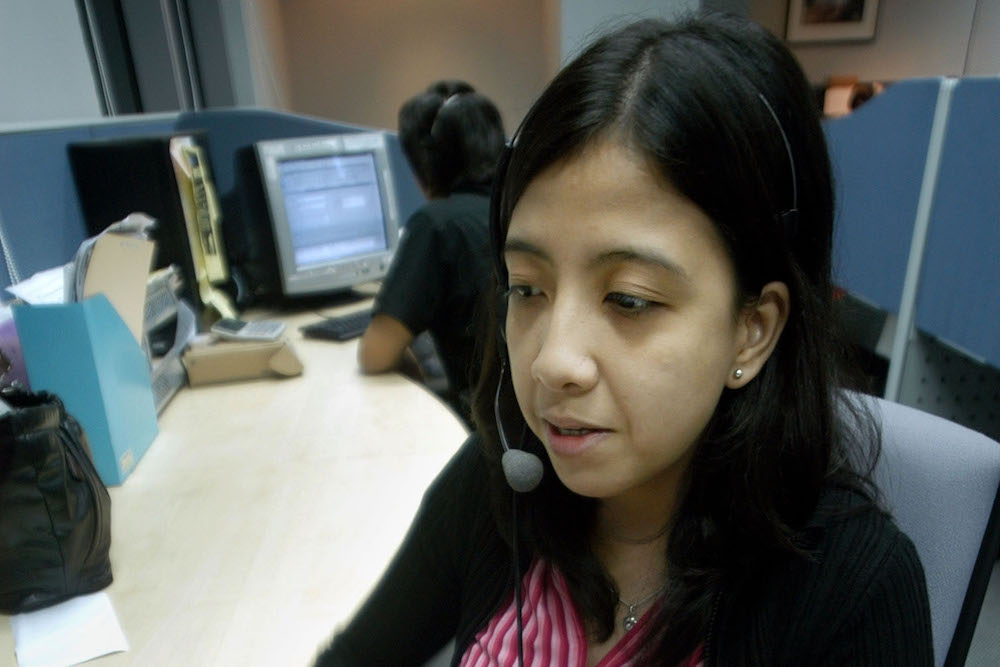 Marissa Serrano answers calls from clients in the United States at the Ambergris Solutions call center in suburban Manila in October, 2003. Photo by Pat Roque/Associated Press.

What changes in a country—and what doesn’t change—when it devotes itself to servicing the businesses of other countries?

Not long ago, I found myself looking for answers to that question in the busy Manila district of Makati, in an interview with Melvin Legarda and Joseph Santiago, executives at the organization then known as the Business Process Outsourcing Association of the Philippines. The organization’s mission is to entice businesses outside of the Philippines to outsource back-office work like accounts receivable and medical billing and, of course, customer service and technical support call centers, to the country.

Call centers are big business in the Philippines, and while I was a doctoral student at New York University, I spent time there researching the industry between 2008 and 2013. During that period, the small Southeast Asian nation and former American colony became a top destination for outsourced jobs from industrialized countries, the United States chief among them. In 2011, the Philippines surpassed India to become the world’s capital of call centers.

I am a Filipino-American woman, and I received a warm greeting from Joseph and Melvin (both 30-something men in suits), along with the familiar roster of questions about my social location in the Philippine diaspora: Was I born in the U.S.? Are my parents both Filipino? Do I speak Tagalog? As our interview progressed, however, it was clear that Melvin and Joseph regarded it as just another opportunity to market the Philippines as a high-quality source of call center labor for companies looking to outsource jobs to a low-cost, offshore location.

In a small conference room filled with motivational posters and ample air conditioning, Joseph and Melvin enthusiastically explained that it’s their organization’s job to make sure people around the world know that Filipinos are fluent in English, highly educated, and literate in media and technology.

I was not surprised by my interviewees’ approach to our meeting, but one part of the marketing spiel that really caught my attention was their discussion of Filipino identity. Speaking in lofty, almost romantic tones, they argued that Filipinos possess an innate capacity for empathy, compassion, and general “service-orientation” and thus are ideal for call center work. They went on to explain that Filipinos are also quite “flexible” (read: easy to train and able to multitask), a feature that helps in the world of contract labor, where a worker’s job description often changes according to client demands.

The roots of Filipino identity, they elaborated, were grounded in the country’s experience of colonialism, occupation, and debt. After over 300 years of colonization by the Spanish, Japanese occupation in WWII, U.S. colonization in the first half of the 20th century, and the severe debt crisis of the late-20th century, Filipinos had become a benevolent and compassionate people—which made them perfect for serving a wide range of customers over the phone.

In the late 20th century, the Philippines’ top export became its people. When labor becomes a country’s number one commodity, the identity of the people providing that labor becomes something to brand and sell.

This wasn’t the only time these beliefs about Filipino identity surfaced during my research. I heard them from the dozens of workers that I interviewed and throughout the hiring and training I myself underwent in a call center later. The grip these ideas had on people prompted me to think that Filipino identity was not simply affected by the spectacular growth of the call center industry, but actively constructed within it.

Since the late 20th century, the Philippine state has framed labor flexibility as a development strategy for an economy that was devastated by punitive “structural adjustments” imposed by the International Monetary Fund (IMF), the World Bank, and the Asian Development Bank (ADB).

State support for overseas labor migration began in the 1970s, with the Philippine government actively encouraging its citizens to pursue work in the United States and oil-rich countries of the Middle East. In recent years, the number of migrants leaving the country to work abroad as domestic helpers, seamen, nurses, or service industry workers has reached one million annually. Meanwhile, migrant remittances—the money sent back home to support loved ones—have grown to make up roughly 10 percent of the country’s GDP, or $33 billion. In the late 20th century, the Philippines’ top export became its people.

When labor becomes a country’s number one commodity, the identity of the people providing that labor becomes an object of marketing rhetoric—something to brand and sell—especially amid global competition with other national, racial, or ethnic groups for the jobs in question. Such competition compels many Filipinos to search for immutable traits that tell potential employers: Hire us, because you won’t get this kind of labor from anyone else.

Take commercial seafaring on container ships or other cargo ships—a common job for Filipino men. In that industry, workers, state officials, and corporate actors alike evoke the long history of Filipino seafaring—as well as the Manila-Acapulco galleon trade in silver and Chinese goods that the Spanish ran between the Philippines and Mexico—as proof of Filipinos’ fit for life and labor on the sea. Similar dynamics apply to nursing and domestic work. According to Philippine-based employment agencies that try to place workers in jobs abroad, Filipinos—especially women—are naturally caring and tender people, not to mention loyal, cooperative, and compliant.

The rise of offshore call center work follows this basic structure of labor migration but with a crucial difference: Filipino workers are not required to leave the country. Instead, they are employed by third-party foreign companies—Business Process Outsourcing (BPO) companies, who contract with corporate clients, like Citibank or AT&T, that are looking to outsource customer care or back-office processes. When it comes to paying workers, the call centers have a double advantage: Wages are much lower than what American or British or Australian workers would earn doing the same work, but higher than or comparable to what college-educated Filipinos would earn in the Philippines’ own professional sectors, such as banking or education. High wages and corporate culture make the jobs attractive to young Filipinos, while government and business leaders take credit for bringing jobs to the country—foreign jobs, but jobs nonetheless.

First, since call center work involves engagement with information technology, it ostensibly shows that Filipinos are prepared for knowledge work and thus the future as a whole. Second, since the work requires the use of mental and social capacities, call centers mark the evolution of the Philippines beyond bodily labor, such as the work done by nurses, nannies, or sex workers. Third and finally, many of my research participants saw the country’s burgeoning call center industry as a clear sign of the country’s rehabilitated status. In the global economy, the Philippines, with its role as call center capital, could no longer be dismissed as the “sick man” of Asia. Indeed, it was a business partner to the United States, rather than a supplicant to other countries.

In this light, the Philippine call center industry was not just an economic pivot for the country, but a cultural fulcrum that could redefine Filipino identity for ages to come.

What could be the danger in that? Shouldn’t exploited and dispossessed people have an opportunity to define themselves?

My answer to this question is yes, but my research in the Philippines revealed many nuances and problems when Filipino identity formation is so closely tied to call center work.

There is a back-to-the-future quality to this new identity. The Philippines, in the 20th century, was seen as an easily exploitable source of cheap labor and resources for foreign powers. The heralding of the call center industry to transcend the Philippines’ reputations as feeble and feminized—and to join the ranks of technologically advanced and more male-dominated countries—is too close an echo of that old reputation. Indeed, this new identity seems to perpetuate the same hierarchies and ideologies of race, gender, ability, and labor which lent the Philippines such a weakened reputation in the first place. 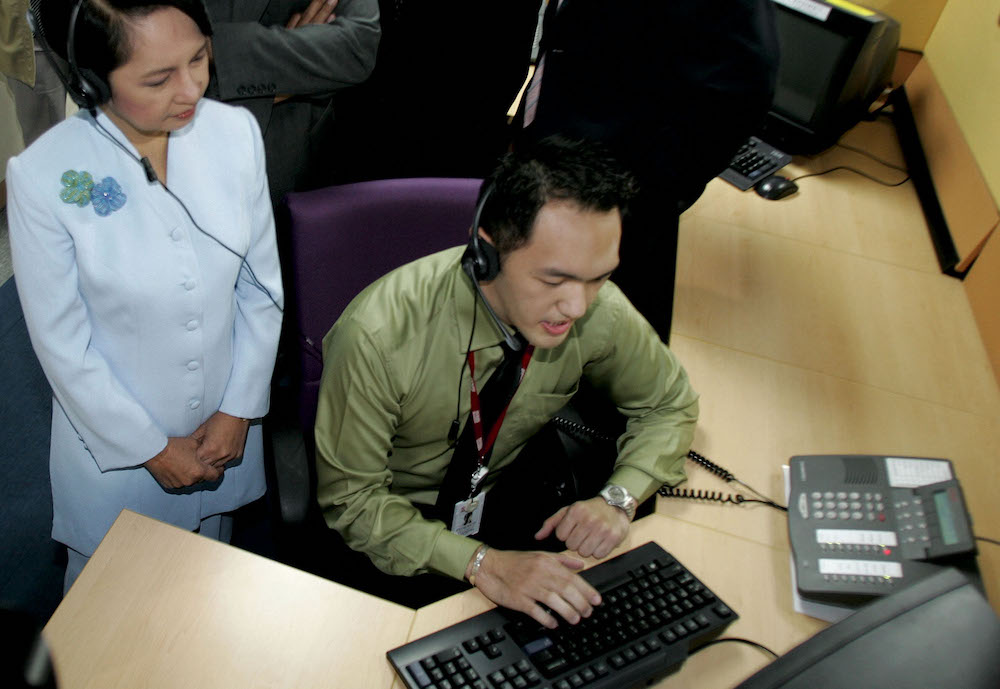 The new identity also makes other distinctions that are problematic. Industry leaders’ assertions that Filipinos are prepared for high-level knowledge work in call centers devalues jobs done at the lower end of the value chain in centers, such as customer care. Consider the commencement speech given by Juan Miguel Luz, a former dean at the Asian Institute of Management, to the graduates of the University of Saint La Salle in Bacolod in 2013. Luz’s address recognized the city’s emergence on the call center scene but also characterized customer service as the “least-skilled” knowledge-based work, since it involved “simple questions or problem-solving [sic].” Bristling at this description, call center workers criticized the speech on social media, explaining that customer service was worthy work requiring a great level of competence. The protest prompted Luz to issue a letter of apology in a national newspaper, in which he attempted to clarify the range of communication, technical, and emotional skills the job requires.

Luz’s speech helps point out that what we consider a good job is often wrapped up in how we judge work done with our hands, hearts, or brains. There are deeply held beliefs that work requiring one’s body or emotions is inherently less valuable than work that draws on the mind, including the use of technology. The introduction of the call center industry in the Philippines reinforces these beliefs, in part by implying that technology has made the Philippines a stronger country. The industry itself is an outgrowth of massive changes made by the government in the mid-1990s to national communications and tech-related policies, which made it easier for foreign companies to invest in the country’s IT systems. Along with these changes came improvements in the Philippine economy overall—including high economic growth, partnerships with regional economic associations, and achieving investment grade status—that supposedly make the Philippines capable of knowledge work and invulnerable to the predations of stronger countries.

Yet this is a dream in which the bullied join the ranks of the bullies (and that’s exactly the dream that has become a nightmare under the current bullying Philippine president). The future of the call center is not different enough from the past; there is no reassessment of the power dynamics that shape economies and lives. The Philippines has long been and continues to be a source of low-cost labor for the world. Call centers, while providing much-needed work, are unlikely to change these dynamics.

Identity construction can sometimes be seen, mistakenly, as an inherently positive process—especially for a postcolonial country like the Philippines. Deeper change in Filipino identity will require changes in the very structure of global institutions and the distribution of power and resources. Perhaps then, the construction of Filipino identity will no longer be constrained by the marketplace, and more Filipinos can define themselves by their own dreams. Economic necessity can’t be ignored, but it should never determine who people are.