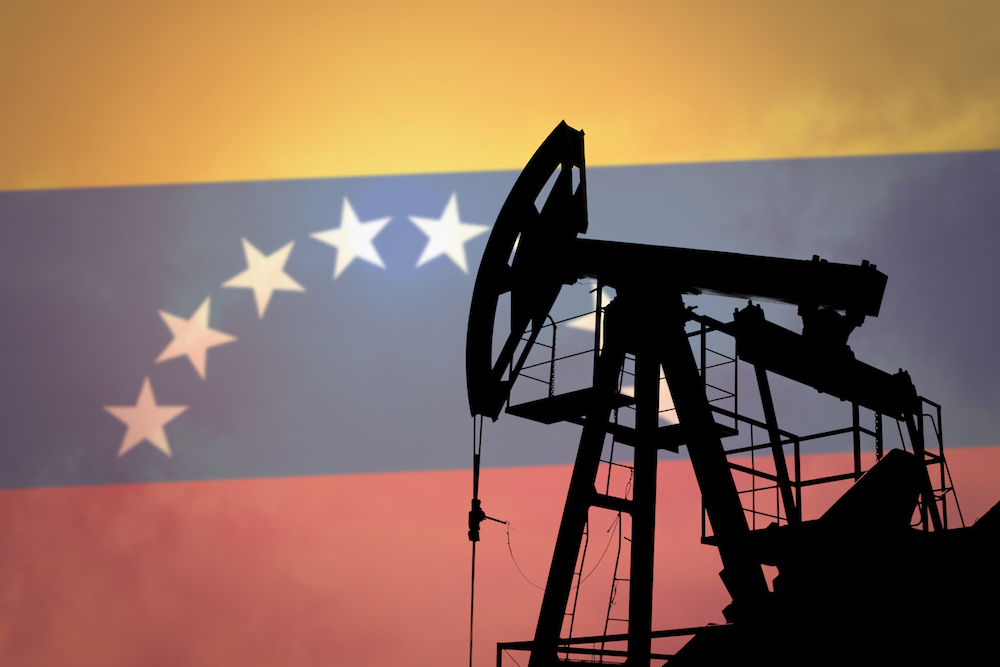 On December 14, 1922, a gusher of petroleum was discovered in Zulia, a rural area of western Venezuela. For nine days the oil showered onto the surrounding farmland, scaring the locals who thought it was an ill omen. Whether or not that was true, it was certainly a sign that Venezuela’s entanglement with oil—economically, politically, and culturally—would change the country forever.

Ever since, writers and intellectuals have spilled ink trying to understand how the oil changed the path of Venezuela, not to mention Venezuelans themselves. One of the first was Arturo Uslar Pietri and his 1936 essay “To Sow the Oil.” In it, he warns that relying on oil may cause the decline of agriculture, and calls for the new wealth to be applied to creating a strong and modern economy. Perhaps the most influential public intellectual of his generation, his concerns were prescient. “To Sow the Oil” turned into a battle cry for an ideal that became more difficult to reach as the 20th century rolled on.

Incidentally, Uslar Pietri was also the originator of the term “magical realism,” to characterize the Latin American literary trend that emerged in the 1930s and ’40s as a marked departure from European literature because it found elements of the fantastical within the mundane and vice versa, expressing a constant duality.

But while Latin American literature became famous for its use of magical realism, the genre was rarely seen in Venezuela. Instead, the most prominent works were generally historical fiction or social novels—written by intellectuals trying to understand who Venezuelans are, where we come from, and which problems and shortcomings characterize our reality. In the shadow of oil, Venezuela’s authors charted a unique territory between politics and literature.

Consider, for example, the career of writer and politician Rómulo Gallegos, who wrote Doña Bárbara in 1929. Hailed as Venezuela’s greatest literary work and one of the classics of Latin American literature, Doña Bárbara has been adapted into two movies, one opera, four TV series—including a telenovela by Telemundo in 2008—and was recently included in PBS’s Great American Read.

The cover of Rómulo Gallegos’s 1929 novel Doña Bárbara, about a despotic Venezuelan cattle baroness. Many regard the book as a veiled critique of Juan Vincente Gómez’s dictatorship, which was propped up by oil wealth. Courtesy of Wikimedia Commons.

The novel focuses on Santos Luzardo, a young Caracas lawyer who returns to manage his family hacienda, and Doña Bárbara, the most feared cattle baroness in the grassland region. Luzardo is order and civilization, a reconciliatory patrician who demonstrates he can be both leader and equal to his peons. Doña Bárbara is anarchy and violence; she schemes with greedy foreigners and corrupt authorities. Victory comes when Luzardo asserts himself to Doña Bárbara and makes laws to be abided.

Many saw Doña Bárbara as a veiled critique of Venezuela under the dictatorship of Juan Vincente Gómez, who ruled the country from 1908 to 1935 and whose power was strengthened by an agricultural monopoly and amicable relations with foreign oil companies. He is commonly caricatured as a cruel and illiterate farmer managing the country as his own personal hacienda. Not long after publishing Doña Bárbara, Gallegos went into exile, joining an entire generation of important Venezuelan writers who were persecuted by the Gómez regime.

This generation’s worldview was shaped not only by living in Paris, Madrid, and Mexico, with their different literary styles and trends, but also by the political nature that exile gave to their work.

Such is the case of Teresa de la Parra, whose first novel Ifigenia was published in Paris in 1924. Ifigenia is a fascinating work, dealing with class, womanhood, and race in Venezuela at the time. Protagonist María Eugenia is a modern, independent woman living in Paris who returns to Caracas to manage her late father’s estate. Since she’s a woman, she can’t inherit, and is forced to live with her grandmother and maiden aunt, who expect her to only knit, pray, and sit by the window until she marries a proper suitor.

Oil is only a whisper on the horizon, but in one telling scene, during one of the upper-class dinner parties, the question of democracy comes up and is quickly shot down. Democracy, one of the guests states, only works in civilized nations with a white population. Dictatorships were necessary in poor, mixed-raced countries like Venezuela, until they became civilized. In this, the characters echoed the way that intellectuals close to Gómez justified his regime.

At the time, the connection between literature and politics was so strong that, in 1948, Gallegos himself became the country’s first democratically elected president—only to be ousted by a military junta a few months later. A dictatorship remained in place for 10 years, but Acción Democrática, the political party that Gallegos helped to found, would go on to dominate Venezuelan politics until the end of the 20th century.

In the tumultuous democracy after 1958, a new generation of writers began focusing, once again, on the interplay between politics, society, and oil in Venezuela. One of them was leftist journalist, politician, and newspaper owner Miguel Otero Silva, whose novels Casas Muertas (1955) and Oficina Nº 1 (1961) follow the life of Carmen, a young woman from a dying town during the Gómez dictatorship, where locals reminisce about the glory days but all she can see are the empty, run-down houses with cracked walls, and her own early death. Eventually, Carmen ends up in a settlement started by American oil prospectors in eastern Venezuela, based on a real town founded by Gulf Oil in 1933. The ambiguous modernity that Americans bring seems inevitable.

After the oil well dries up, Carmen sees with pride the thriving community the town has become. Children, without distinction of race or origin, play together, and news that political parties and unions have been legalized brings optimism about the future. For Otero Silva, it’s apparent that the ideal of “Sow the Oil” could exist in an egalitarian democracy that created structures that united Venezuelans as a whole, bringing progress and opportunity.

By the mid-1960s, writers and intellectuals focused less on oil itself than on its social and cultural consequences. As the democratic government led by Acción Democrática navigated between left-wing guerrillas and right-wing threats, the country was ambivalent about the overwhelming role of the United States, both in buying oil and interfering in democracy—much as it had supported previous dictators.

But the northern neighbor’s cultural influence spread rapidly, and in less than a generation, the nascent Venezuelan middle class embraced an Americanized lifestyle, while many rural poor moved to haphazard housing in the cities. This story is well told in the 1973 satirical novel El mago de la cara de vidrio by Eduardo Liendo, which describes how buying a TV set brought about an Everyman’s downfall—showing him the wonders of the world while also making him self-conscious about his clothes, and causing his children to abandon folk tales for hot dogs and Disney cartoons.

Probably the most iconic Venezuelan novel from this time is País Portátil by Adriano González León, published in 1968. Protagonist André Bazarte is a department store employee who is trying to cross Caracas at rush hour while carrying a briefcase, on a special mission from the guerrilla group he belongs to.

For Bazarte, joining the guerrillas has less to do with a collective, ideological agenda than an individualistic, existential one. His beef is not with the current Venezuelan government, Cold War politics, or U.S. imperialism. Instead, he seeks authenticity in an increasingly artificial society by recalling men like his ancestors, whose rustic masculinity has been made almost extinct through oil’s modernization and its complicit governments.

The 1970s were a boomtime for Latin American literature, with iconic authors like Gabriel García Márquez, Mario Vargas Llosa, and Julio Cortázar writing from Paris, New York, Mexico City, and Madrid, as their own countries were engulfed by violence and authoritarianism. But Venezuelan authors, finding themselves in a privileged position, were notably absent.

As residents of one of the few democracies in Latin America, the country’s intelligentsia had little motivation to project themselves outside its borders. What is more, with the nationalization of the oil company in 1975, state-funded publishing houses such as Monte Ávila published books that weren’t commercially inclined and didn’t seek to reach a broad audience. This led to an insular, self-indulgent literary bubble, seldom noticed by mainstream society. Unconsciously, writers no longer focused on the consequences of oil, as the former generations had—but their insularity was itself a consequence of oil.

Once more Venezuelans feel disoriented, unable to recognize their own country. And once more this common experience is good for Venezuelan literature—both readers and writers.

The next phase of Venezuelan literature arrived in the late ’90s, with the downfall of traditional parties like Acción Democrática and the rise of Hugo Chávez and the Bolivarian Revolution. Over the years, the slums had grown, brewing a discontent from a population that felt ignored by the established political system. In many ways, the upper classes grew isolated and everyone took for granted that the wealth from oil, directly or indirectly, was something that would never run out.

When Pim, Pam, Pum by Alejandro Rebolledo was published in 1999, it was the first book to confront the general malaise Venezuelans were experiencing, particularly the younger generation. The discontent that it expressed has changed and evolved, becoming a constant in today’s Venezuelan novels.

Written in slang, the book focuses on the drug-fueled escapes of a group of dissatisfied youth in late-’90’s Caracas. They see Venezuelan society as inherently corrupt and impossible to change. The narrator has never voted and says that if he had any money, he wouldn’t pay taxes either. One of his clique ironically wears a Chávez T-shirt, more as a statement than in actual support for the then presidential candidate.

I suppose this new literature of discontent could be considered post-oil, in the sense that it reflects the consequences of not addressing the consequences of oil. Venezuelan literature, both high and low, now repeats the same themes: decadence, loss, migration, corruption, abuse, and nostalgia under the Bolivarian Revolution.

One such literary attempt to capture the current zeitgeist is Blue Label by Eduardo Sánchez Rugeles, about a young woman from Caracas venturing to the countryside to seek her estranged grandfather, a French national who represents her chance to get out of a Venezuela she has no attachment to, and sees no future in.

If 1924’s Ifigenia was about a young woman coming to Venezuela and looking for something to call hers, Blue Label is the opposite: a young woman seeking to leave Venezuela, convinced that, whatever the country is now, it isn’t hers. In a way, her character also has shades of the protagonist of Casas Muertas, constrained by the limitations of her dying town.

As during the Gómez regime, once more Venezuelans feel disoriented, unable to recognize their own country. And once more this common experience is good for Venezuelan literature—both readers and writers. This loose and undefined time is inspiring writers to find ways to depict the debates Venezuelans are having every day and, in that way, connect with the general public.

Perhaps, as both writers and readers scatter from Venezuela itself, a new diasporic literature will find a voice that is unequivocally Venezuelan but also something else. Oil’s future today seems uncertain as the country’s production drops, but its cultural influence, the failed promise that was “To Sow the Oil” and the memory of the brief moment of peace and prosperity that it brought, now seem quintessential to our sense of ourselves.