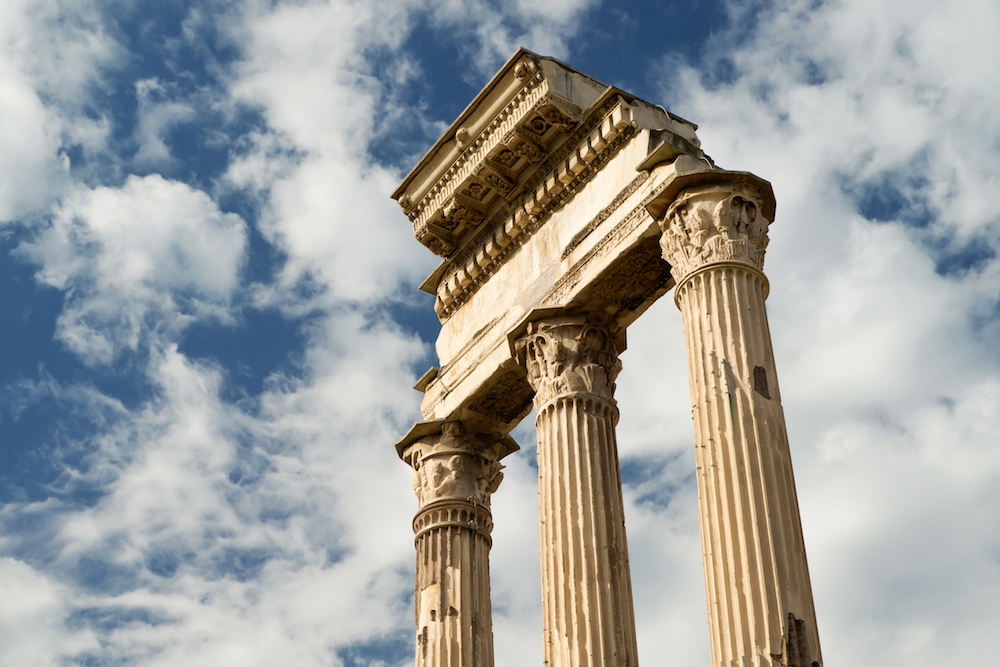 The Temple of Castor and Pollux at the Roman Forum. Courtesy of Shutterstock.

The question might seem hypothetical, but I found it inescapable last week in Rome, where I was running a global forum on the future of direct democracy. Our forum’s mission, on its face, was hopeful: Hundreds of participants, from 80 countries, discussed how to make the world’s democracies more participatory through initiatives, referenda, and other tools.

But each morning, as I left my budget hotel, I found myself picking through the less-hopeful remains of the fallen empires that lay directly in my path.

To reach Rome’s city hall, the conference site, I had to walk up Capitoline Hill, passing two ancient monuments, each of which inspired a different thought.

The first monument, the Colosseum, seemed less special with each day’s viewing. I mean, what’s the big deal about a dilapidated old stadium known for hosting violent spectacles on the field and in the stands? Heck, you can go to Los Angeles and Oakland and see similar coliseums today.

But the second monument, the Roman Forum, felt more profound and sobering, every time I passed. Its layers of ruins—of temples and stores and the grand plans of so many great powers—serve notice that no regime and no republic lasts forever.

Still, the most enduring lessons of the Eternal City lie not in the ends of eras, but in how people respond in the aftermath of those ends.

A new book, Rome: A History in Seven Sackings, shows how Romans, having been conquered so many times over thousands of years, have responded in every conceivable way in the post-sacking. They have brushed off some defeats quickly, while stewing over others, according to author Matthew Kneale, a British novelist who is a longtime Rome resident. Romans have sometimes abandoned the city, and in other cases have returned to the city to buck it up. They have come together, and they have turned on one another. They have descended into authoritarianism as well as anarchy. They have turned toward religion and turned away from it.

But Rome has survived because Romans eventually “shrugged off catastrophes and made their city anew, adding a new generation of great monuments,” Kneale writes.

Californians can’t match the history of Romans, but our state too was reshaped after apocalypses. For all our booms, from the Gold Rush to Silicon Valley, the state has mostly been fashioned during the busts, when we were forced to reassess. Our current state constitution was a response to disastrous financial panics of the 1870s. Our state government’s progressive structure was fashioned by survivors of the 1906 San Francisco earthquake while their city lay in ruins.

Today, Californians from Redding to Santa Rosa to Montecito are wrestling with the decisions that come after massive destruction from fire or mudslides. Do we stay? And if we do, do we rebuild the way it was, or figure out something different?

In a larger sense, the state is still struggling to renew itself after the Great Recession. Our record in this is mixed. The economy has come back—along with our spirit—but we responded to the housing bust by not building housing, creating a historic shortage. And it appears that, by embracing Jerry Brown’s excessive frugality, we missed a great chance to rebuild our state’s crumbling infrastructure when land and construction were cheaper at the beginning of this decade.

But for all California’s experience with disaster, the soon-to-come end of the American empire—accelerated by crushing debt, faltering defense alliances, educational underinvestment, trade wars, racial resentment, and, of course, that Nero in the White House—will test California like never before. We are accustomed to being the richest part of the richest country, playing in an international economy that runs on our money and follows our rules. So it is hard to know how we’ll respond when all of that changes.

Will we be drawn deeper into the internal fights of a polarized America, and ape its violence? Will we quietly accept a diminished status? Will we fight and turn on each other? Or will we come together, reinvent ourselves, and find a distinguished place in a less American world?

How could the New World of America have gotten so old, and the Old Europe of Rome become so young?

Rome is the perfect place right now to think through such questions, not only because it’s old but also because the city has a vital young government that is thinking anew. Led by 40-year-old Virginia Raggi, the first woman to rule Rome since Marozia in the year 930, the government is run by an internet-based party called the Five Star Movement, which uses an online program (named Rousseau) to let members choose its candidates and determine its agenda.

And so ancient Rome is now run by a team of highly educated, self-critical millennials who don’t share an ideology but are obsessed with technology. As they will tell you, it’s unclear whether Five Star can transform Rome and reinvent democracy with its digital platforms, or whether it will splinter or fail like so many other populist movements. (One worrying fact: At the national level in Italy, Five Star is governing via a tenuous coalition that includes an anti-immigrant Trumpian party called the League.)

But it was refreshing to spend long days with the young people running Rome. Unfortunately, each day’s optimism would last only until I went back to the hotel, where the lobby TV was turned to CNN.

The screen conveyed all the late-empire awfulness of America’s leaders. And it posed that question again: How will California get through this? The psychologist from Palo Alto dominating the news embodied the Californian predicament. There Dr. Blasey Ford was, struggling to maintain her cool and her dignity in the face of the American meltdown.

From Rome, it looked like opera buffa, with the tenor Kavanaugh singing his angry arias about the maiden he claims he did not violate. And why couldn’t they get younger actors for the chorus of senators? Our own representative on that stage, Dianne Feinstein, is more than a half-century older than the officials I was seeing at Rome’s city hall. How could the New World of America have gotten so old, and the Old Europe of Rome become so young?

One evening, Mayor Raggi and her staff took hundreds of conference attendees to a fashionable, open-air Roman nightclub. I quickly realized that I’m not cool enough for my own conference.

The nightclub was covered by a canopy of cypress trees so beautiful that even Monterey peninsula residents would marvel. And, in another California-style twist, different areas of the club seemed to represent different ecosystems—marsh, forest, beach—while various bars and food stations offered wildly different cultural styles—Japanese, Thai, Cajun, TexMex, Hawaiian, and something reminiscent of Disneyland’s Enchanted Tiki Room. There were hammocks, beds, and even an attached second nightclub with its own maze of laurel bushes.

I couldn’t see a sign, so I asked a manager for the place’s name. “The Sanctuary,” he replied.

California is proudly a sanctuary state for unauthorized immigrants. But when empires fall, we all need sanctuary. Here’s hoping that, when the time comes, California can construct its own new and diverse democracy on top of the ruins of the American one.