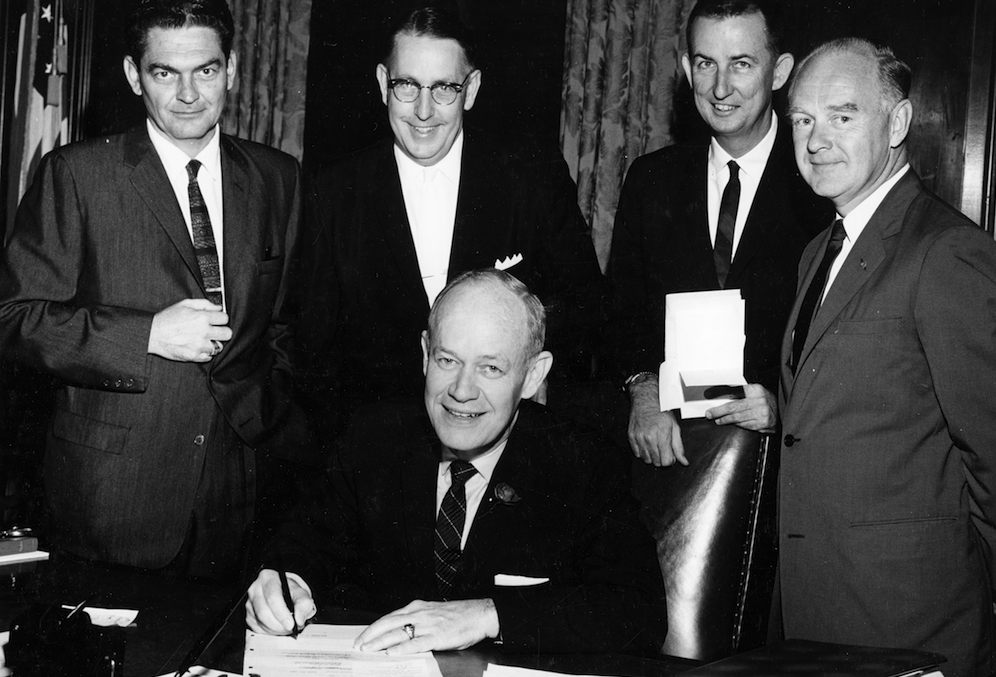 Across America, and particularly in the South, struggles over cultural values have often been rooted in race and sex. Yet some historical moments stand out as stranger than others.

In 1956, Florida’s state legislature established a committee to investigate legal infractions by the National Association for the Advancement of Colored People, as well as any links that the organization might have to subversive groups. At the time, Florida was just one of several Southern states creating their own sovereignty and education commissions, as well as committees on un-American activities.

The Florida committee, like the others, was part of the white South’s campaign of “massive resistance.” State and local governments deployed legal and procedural weapons against efforts to implement Brown v. Board of Education, the 1954 U.S. Supreme Court decision desegregating public education. These state groups, which operated largely independently but maintained varying degrees of communication with each other, all had one purpose: to keep white schools white.

In Florida, however, that purpose would expand to include other threats to the status quo. In an effort to fight the influences it saw transforming society, the committee would turn into a vehicle for identifying, interrogating, and removing homosexuals from schools and universities, while also attacking other groups it believed were threatening traditional American values. This broad targeting of groups and manipulation of public fear in the face of cultural change emerged as a set of strategies still in use today.

The Florida Legislative Investigation Committee was led by state senator Charley Johns, a key member of a bloc of conservative lawmakers from northern and central counties who held power well beyond their numbers in the legislature. The Johns Committee, as it became known, was an interim committee, which meant that every two years its renewal required approval from both chambers.

Over the next nine years, legislators renewed the Johns Committee four times. During that period, the committee’s list of targets grew. First, they focused on the NAACP. Spying on and harassing members, they held a series of public hearings in which they tried to show that the organization was breaking the law, that it had been infiltrated by communists, and that social equality (a euphemism for interracial marriage) was its true aim.

Two years later, the committee moved on to homosexuals. Late in 1958, the Johns Committee began an investigation of suspected gay professors and students at the University of Florida. This expanded to a search for gay and lesbian public schoolteachers around the state; then to scouring Miami for underage male prostitutes and pornography; and finally, investigating alleged deviants, atheists, and liberals among the University of South Florida faculty.

In all of its investigations, from civil rights to gay and lesbian teachers, from liberal professors to indecent literature, the Johns Committee was both a product of its time as well as a trailblazer in mobilizing opposition against liberalism as a threat to racial and sexual norms. Its investigations of civil rights activists were part and parcel of a regional attack on the NAACP. Rooting out homosexual teachers and professors—which involved surveillance, entrapment, interrogations, threats of exposure, and accusations of seducing and recruiting the young—reflected the prevailing approach to dealing with homosexuality at the time, from local law enforcement to the federal government and the U.S. military. Concern over obscenity was enmeshed in a broader decency crusade that was washing over much of the country in the late 1950s and early 1960s. And criticism of leftist intellectuals and the modern university had been a mainstay of Cold War conservatism for years.

They staked out bus stations and parks, as well as men’s bathrooms on college campuses and in the Alachua County courthouse.

Beginning in 1958 at the University of Florida in Gainesville, chief investigator R. J. Strickland, assistant investigators, and city and university police officers moved to question hundreds of suspected homosexuals around the state. They spied on private residences and infiltrated gay bars. They staked out bus stations and parks, as well as men’s bathrooms on college campuses and in the Alachua County courthouse. They questioned prison inmates, college students, juveniles in reform schools, public school teachers, choir directors, university professors, ministers, hustlers and prostitutes, truck drivers, scout leaders, and traveling salesmen.

In a 1959 report to the legislature, Charley Johns explained that the committee had uncovered vitally important facts about the problem of homosexuality in Florida: There were “several classes” of homosexuals. Homosexual activity became “more prevalent as you progress upward on the educational scale.” Lesbians and gay men were “made by training, not born.” And “a surprisingly large percentage of young people are subject to be influenced into homosexual practices if thrown into contact with homosexuals who desire to recruit them.”

For a brief period in the early 1960s, the committee’s mission and ideas had the full and enthusiastic support of the governor, Farris Bryant, a conservative Democrat who created advisory committees on homosexuality and indecent literature in 1961. That year, the Johns Committee joined with these advisory committees and the Florida Children’s Commission to host a series of conferences across the state.

Nearly twelve hundred Floridians attended the conferences. According to the Tampa Tribune, until Governor Bryant “or other experts” could find the “best answer to curbing homosexual practices before they corrode innocent persons’ characters, there will be no attempt by the administration to hamstring or slow down the work of the Johns Committee.” 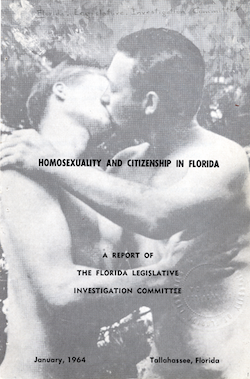 The title page of the Johns Committee’s controversial 1964 report, Homosexuality and Citizenship in Florida. Courtesy of the Florida Heritage Collection and the George A. Smathers Libraries Special Collections, University of Florida.

Around the same time, a small group of self-described “concerned citizens,” including the mayor of Tampa, met to discuss the University of South Florida, where parents expressed concern that their kids were being corrupted in the classroom by the teaching of evolution, moral relativism, acceptance of interracial dating, and the historical fallibility of the Bible, as well as a speakers’ policy that would allow communist sympathizers on campus.

The group voted to ask the Johns Committee to investigate the university—not only about homosexuality, but about this whole set of issues. Strickland began questioning students in Room 170 of the Hawaiian Village Motel in Tampa. There, witnesses described unwanted homosexual advances by a music professor, rumors about which professors were gay or suspiciously effeminate, inappropriate sexual comments in class, liberal discussions of race, disdain for religion, softness on communism, and even a list of swear words uttered by one professor during a lecture.

Word got out about the motel-room interrogations, and the USF president, John Allen, took the investigation public, demanding that the committee hold open hearings on campus. For two weeks, the Johns Committee questioned faculty, staff, and administrators about who they were hiring and what they were teaching. As with the NAACP, the university was able to defend itself and paint the committee as overzealous and overstepping legislative bounds. A consensus in the Tampa Bay area eventually emerged on the side of defending academic freedom, but that was tempered by a persistent distrust of higher education from the right.

The effects of the investigation rippled across the state’s university system. In 1962, the Board of Control of the university system revised its “Policy on Morals and Influences,” in part mandating that each university president maintain files on all faculty members, including their “academic background, loyalty, attitudes toward communism, moral conduct, and general teaching ability.” Prospective and current students were now to be scrutinized for “any indication of antisocial or immoral behavior, such as communistic activities or sex deviation.”

In 1963 the committee again used a highly publicized investigation to make the case for their own renewal by the legislature. Charley Johns reported that they had succeeded not only in uncovering homosexuality, “anti-Christian teachings,” and communist sympathizers “teaching and indoctrinating,” but also in helping an unnamed federal agency remove “thirty-nine homosexuals and two of ’em was in high, exalted positions of trust.” The work of the committee, Johns insisted, “has got to go on. It’s larger than any of us.”

But the Johns Committee would disband before its term was up. In less than a year after the publication of a lurid 1964 report called Homosexuality and Citizenship in Florida (informally, and infamously, known as the Purple Pamphlet) and the outcry it elicited, the committee quietly disbanded. A state attorney in Miami called it obscene and threatened legal action, while publications ranging from the Tallahassee Democrat to the New Republic, Life, and Confidential drew national attention to the graphic photos, alarmist claims, and eye-popping glossary contained in the report. Johns himself later admitted that they should “close the office, lock up the records, and save the taxpayers of Florida the remainder of the $155,000 appropriation.”

The myth behind the anti-gay, anti-integration, and anti-obscenity arguments at midcentury was that liberals were attempting to force Americans, especially young people, to accept abnormal behavior as normal. It is striking how these views still animate part of our political imagination in much the same way they did in postwar battles: over what kind of nation we want to be, as well as how to define “Americanism” and who should be included in, and excluded from, the rights and privileges that come with it. There are some historical moments—like the time the Johns Committee operated in Florida—when such myths are embraced by enough people to provide a veneer of legitimacy, and an excuse to act.