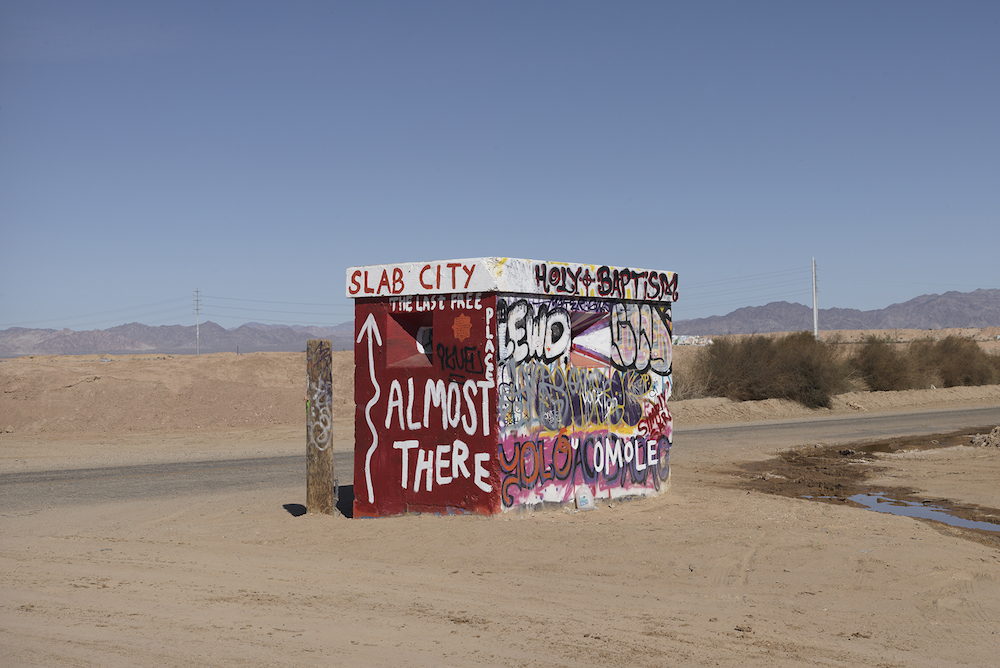 When the alert pinged on my phone, I thought of Austin and his house of wooden pallets. A “wall of dust” roiled toward Slab City and other “impacted locations” in California’s Imperial County, and the National Weather Service warned: “avoid outdoor exposure.” It was an official weather bulletin for an unofficial place. An advisory with no remedy, because with pallets for walls there is no inside.

Now in its seventh decade, Slab City is a longstanding but chronically impermanent settlement built on Camp Dunlap, a decommissioned World War II training camp. It is an informal community of squatters, snowbirds, homeless residents, veterans, and artists like Austin, all making their homes in this unhomely desert environment wedged between an active gunnery range and the Imperial Valley’s industrial agriculture.

Leftover from the military camp, the basic elements of a town are here: roads, reservoirs, sewers, slabs, and foundations. After the camp was disbanded in 1946, the eponymous concrete slabs were left behind when the wooden buildings moved to Niland, the nearest town, four miles away. The slabs that remain today are cracked and partially covered with sand, and the camp’s original roads are pocked with holes and rutted with tank tracks. The million-gallon cisterns are empty; manholes have been filled in and their covers salvaged long ago. This residual infrastructure provides a backdrop to understand how people make homes in extreme places and how the things people make stand up to time, other people, and dust storms.

Off the grid, living in what is often called the “last free place,” Slab City’s residents measure the durability of their freedom in what they build. In structures like houses of wooden pallets.

I met Austin on one of my trips to Slab City with the Irish photographer Donovan Wylie. We wanted to understand the architecture of this place and its residents’ struggles with adaptation and resistance. When the weather alert came through, a year after my most recent visit, I didn’t know exactly how the storm would affect Austin’s pallet structure, and I wasn’t sure which version of pallet architecture would sift the wall of dust, or even if its architect was still there.

Wearing sandals made from two-by-four blocks of wood, Austin first approached us with a clipboard to ask if we’d like to see the three-level A-frame he was building. He walked us through the ground level where couches and chairs filled a shady living area on the ground. Further up, he had a workshop dedicated to hacking the proprietary charging systems of cordless tools. Magazines of AAA batteries sprayed out of the opened handles of drills and saws, waiting for their solar panel charge. Up above, a communal sleeping loft looked out through pallet frames toward the Algodones Dunes and the invisible Mexican border to the south, and westward toward Salvation Mountain and the Salton Sea’s dusty veil. Between slats to the east, we could see plumes of smoke rising from ordnance that had been dropped on the bombing range.

Slab City is here because it is a so-called Section 36. In America’s westward expansion, the National Land Ordinance of 1785 and subsequent land acts, including California’s 1853 survey, overlaid the land with a grid and divided each township into 36 sections. In this system, every township had two square-mile plots—Section 16 and Section 36—reserved for public education. Many have been sold by states to help fund schools, but this particular Section 36 has lingered as a small piece of public land, a forgotten square of desert atop East Mesa along the Imperial Valley’s ancient shoreline.

In the early 1940s, the Navy saw strategic advantages in the plot’s remoteness and its similarities to North Africa’s war theater. And so the U.S. military paid California $3,810 to install Camp Dunlap, the only revenue the state has ever received from this piece of land.

When the military moved out, migrant farmworkers harvesting creosote moved in, and Slab City’s informal settlement began. Despite pressures from developers and state officials concerned with liability, this Section 36 persists as a residual piece of Manifest Destiny where public land hosts private aspirations, rights meet hardship, and makeshift dreams ride the desert sea like concrete slabs on sand.

On Austin’s clipboard were sketches that carried more than just plans for shelter. These designs harbored visions and hopes. They delineated the fugitive aspirations of an artist, a resident of Slab City, a member of a wider community founded on an ethic of reuse. Residency on the slabs can be as fleeting and vulnerable as the materials at hand: cardboard, palm fronds, shade cloth, and pallets are themselves transient. And when I returned less than five months later to visit Austin, his original pallet structure was gone, and another had risen across the road.

If the previous project was the house of an idealist, a DIY hacker, an improviser, then this new one was the refuge of an ascetic, a hermit, a master geometer. If the first had been an exercise in communal living cast within a builder’s yard and its organized riot of materials, this second structure was a remote outpost, its peaked arch of pallets recalling the praying hands of Jerome, isolated in an austere sand and gravel lot. The frame of this inverted V rose twenty feet into the desert sky, pushing the modules of soft wood to their material limits so that the middle two pallets of each side sagged a little under their own weight, as if weary from traversing borders, supporting goods, and delivering things in the 21st century’s global supply lines. 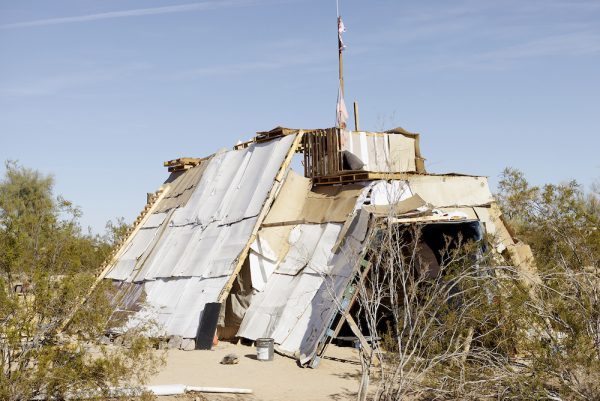 Now, this frame (is it a pointed version of St. Louis’s arch and a smaller gateway to this vestige of American frontier?) rises over a box formed by 28 other pallets, making room for its resident and, at the same time, presenting another experiment in living that tests the limits of “free,” within what public land and available materials might offer.

Where do you go in a dust storm when the last free place is already your refuge of last resort? How do you avoid exposure in a place that is already fully exposed? Build what you will, with the materials you have. Each of Austin’s pallet structures embodies the independence of building up and tearing down at will. But in something like a dust storm, this self-determination reaches its limit, and freedom becomes as porous as a pallet’s slats.

Slab City’s residents have been displaced from elsewhere. (Austin came from the city he’s named for.) Some arrived here by choice, but many others came here, seeking to escape forces beyond their control—whether economic, societal, or political. And the dust storm itself is a function of environmental degradation that began with the gridding of a continent, and continued with projects to irrigate the valley, triggering the calamity that formed the Salton Sea, which now issues toxic dust from its retreating shores.

Despite its remoteness and insularity, the last free place can’t escape these legacies. (In fact, it may be at their epicenter, just as it straddles the San Andreas Fault.) In some ways, Slabbers follow in the footsteps of the soldiers who trained here because they too are training to live in the desert. And before the first slabs were poured, the Navy set up a field lab to test the casting of concrete in extreme temperatures, nearly 120 degrees in that summer of 1941. Residents of Slab City now test the idea of freedom in a laboratory of their own making.

No reports followed this particular storm, but any snowbirds who lingered on the Slabs for the summer season would have recognized blizzard conditions as yellow clouds of sand and dust blotted out the sun, lowered temperatures, and reduced visibility to a few feet. Drifts of sand likely pressed into Austin’s second pallet structure, as dust layered onto cans of food, chairs, tables, tools, and sketchpads, leaving a gray coating on every surface as if it had been there for hundreds of years. Slabbers who had cars or trailers would have retreated into their sealed interiors, while others like Austin would rely on a pallet’s imperfect windbreak to avoid sandblasting that can last for hours.

The wall of dust will be followed by other storms, just as plans to close Slab City will be proposed and then postponed, and somehow this place will endure. Freedom may not be free, but when it manifests itself in the solidity—even if makeshift—of this architecture, like Austin’s pallet structures, hidden identities become apparent. Each resident brings their own admixture of need and desire and curates an equally aggregated version of ‘last free place.’

Out here on the slabs.