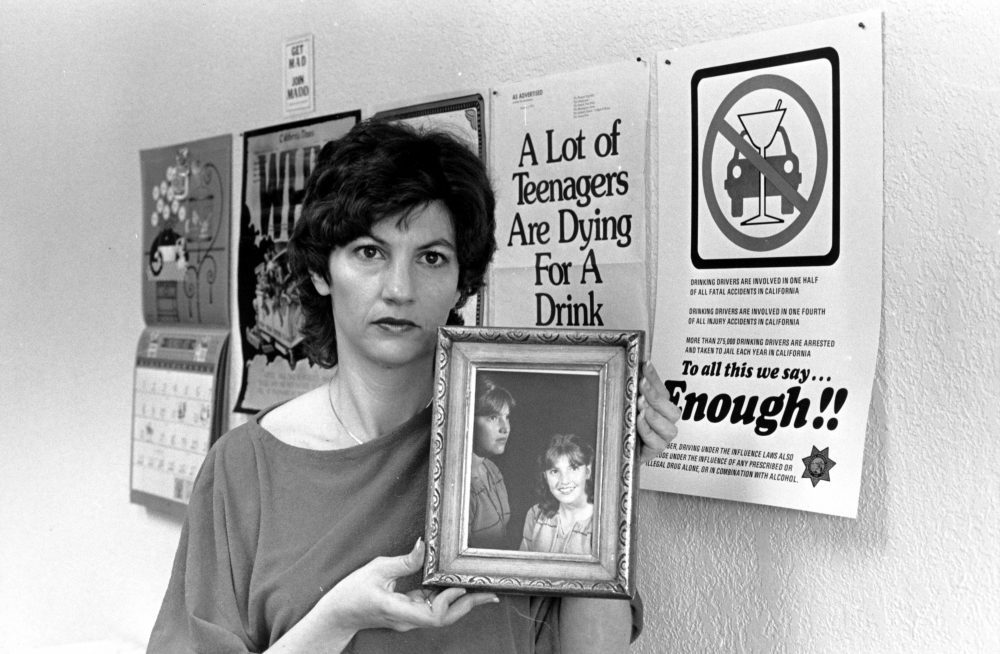 Candy Lightner, president of Mothers Against Drunk Driving, holds a picture of her late daughter who was killed by a drunk driver. Courtesy of the Associated Press.

At a traffic safety conference in 1980, a Californian named Candy Lightner delivered her first public speech about a 13-year-old freckle-faced girl who had recently been killed by a drunk driver with several previous convictions.

At the conclusion of her talk, she announced, “That girl was my daughter.”

As Lightner later wrote, the press ran out of the auditorium to call their photographers. “Pandemonium ensued,” she recalled.

Recidivist drunk drivers had killed children—and adults—for decades in the United States, often receiving little more than a slap on the wrist. But in the early 1980s, a series of political and cultural factors coalesced to make drunk driving perhaps the foremost public health issue in the country.

Nearly four decades later, most Americans are well aware of the anti-drunk driving agenda pioneered by Mothers Against Drunk Driving (MADD), the organization that Lightner founded. But the persistence of drunk driving reveals how difficult it can be to restrict the actions of citizens who live in a country with a strong libertarian ethos.

It is no exaggeration to say that drunk driving was largely ignored in the United States until the late 1970s. Even when drunk drivers caused serious injury or death, they often pleaded guilty to misdemeanors or traffic violations. For young men aged 21 to 44, who constituted the bulk of the offenders, drunk driving was almost a rite of passage. More jarringly, from our modern vantage point, police and prosecutors characterized victims such as Lightner’s daughter Cary, who had been walking down the side of a highway when she was killed, as being “in the wrong place at the wrong time.” Deaths caused by drunk drivers were “accidents.”

In a country that celebrated both drinking and driving, it has long been hard to convince people that it was unacceptable to do both.

After its brief flirtation with Prohibition in the 1920s, the United States readily welcomed back alcohol into its social fabric. Manufacturers used advertising in newspapers and magazines, and later on radio and television, to connect drinking with the good life. It was a healthy habit, too. A 1937 pamphlet entitled Beer in the American Home actually characterized the beverage as “liquid food.” And the more you drank, the better. Schaefer reminded its customers that it was the “one beer to have when you’re having more than one.”

Prior to World War II, most public drinking occurred in bars and taverns located within cities. Patrons could avail themselves of public transportation to get home. But rapid suburban growth in the 1950s meant that drinking became associated with driving, either after work or after dinner at a local restaurant.

In the late 1950s, a Harvard-trained physician and epidemiologist named William Haddon, Jr. began to formally study the incidence and characteristics of drunk driving in the United States. His work culminated in a document, the 1968 Alcohol and Highway Safety Report, that estimated that alcohol was involved in 800,000 crashes annually, leading to 25,000 deaths. Drunk driving, he and his coauthor A. Benjamin Kelley concluded, was a major public health problem that was being ignored.

But it was not until victims of drunk driving went public with their stories that the people paid attention.

This happened because two modes of advocacy converged in the early 1980s. On the one hand, anti-drunk driving efforts built upon recent progressive activism such as the Civil Rights movement, anti-Vietnam War protests, and second-wave feminism (hence Mothers Against Drunk Driving). On the other hand, fighting drunk driving meshed with more conservative, Reagan-era efforts to create “wars” against drugs and crime and to recognize the rights of crime victims.

Rapid suburban growth in the 1950s meant that drinking became associated with driving, either after work or after dinner at a local restaurant.

MADD was not the first organization to take on drunk driving. In 1978, a journalist named Doris Aiken, upon learning of the deaths of two upstate New York teens at the hands of an extremely drunk driver with an open can of beer between his legs, founded Remove Intoxicated Drivers (RID). But it was MADD that became the country’s preeminent anti-drunk driving organization.

Working with other mothers, such as Cindi Lamb, a Maryland woman whose five-month-old daughter was paralyzed by a drunk driver who had consumed two pints of whiskey for breakfast, Candy Lightner went on the attack. The original name of her organization was Mothers Against Drunk Drivers, though that was later softened.

Lightner’s activism became a 24/7 job. A fixture at the offices of California Governor Jerry Brown and various legislators, she demanded stricter laws and a state drunk driving task force. Lightner appeared regularly on national television programs, such as 60 Minutes and The Phil Donahue Show, where her ability to deliver potent sound bites, debate opponents, and seemingly cry at will made her a compelling guest. By 1985, MADD had over 300 chapters nationwide and 600,000 volunteers. Several surveys listed it as America’s favorite charity.

And MADD’s results were even more impressive. By the mid-1980s, states had passed over 700 new drunk driving laws, closing loopholes, imposing stricter penalties and lowering the legal blood alcohol limit from as high as 0.15 percent to 0.10 percent and then 0.08 percent. Activists convinced states to adopt many of these new restrictions by getting the federal government to withhold much-needed funding for highway construction unless they complied. The anti-drunk driving movement was both persuasive and innovative.

MADD’s greatest accomplishment occurred in July 1984 when President Ronald Reagan signed the Minimum Legal Drinking Age Law, which prohibited the sale of alcohol to individuals younger than 21. You could vote in America at the age of 18, but you could not drink until three years later because the data showed that younger drivers disproportionately caused more alcohol-related crashes. Such was the strength of the anti-drunk driving coalition. And these interventions, coupled with concurrent efforts to make cars and roads safer, seemed to be working. By 1985, drunk driving deaths had decreased from 25,000 to 17,000 annually.

As with most social movements, efforts to lower drunk driving waned over subsequent years. Once everyone has heard your message, it is harder to attract media attention and contributions. Other worthy causes, such as AIDS and breast cancer, took center stage. More recently, attention to related problems, such as distracted and drugged driving, have attracted considerable attention.

The fight against drunk driving has also suffered from backlash. First, the beverage industry, which had vehemently opposed efforts to raise the drinking age and to lower the legal blood alcohol level, accelerated its efforts to thwart additional reforms. Existing restrictions, argued the American Beverage Institute representative John Doyle in 2000, were turning responsible social drinkers into outcasts. It was becoming impossible to have a couple of drinks with dinner and not be at risk of getting pulled over and charged with a crime. Doyle even stated his job was to “defend drinking and driving.”

Second, drunk driving reform conflicted directly with America’s long history of celebrating individual liberties. “Freedom is a hard thing to preserve,” legendary attorney Clarence Darrow stated in 1928. “In order to have enough you must have too much.” Further crackdowns on drinking drivers, libertarians claimed, were “neoprohibitionist” efforts to restrict drinking masquerading as drunk driving reforms. Perhaps no group better exemplified this mindset than Modern Drunkard magazine, which was founded in 1996 and is still publishing. Drunk driving activists, according to a 2002 article, had gone from a “well-meaning group of social advocates” to a “fraudulent gang of liberty-squashing fascists.”

As a result of these barriers, the anti-drunk driving movement remains what MADD’s chief government affairs officer J.T. Griffin calls “a work in progress.” For example, our legal blood alcohol limit largely remains stuck at 0.08 percent, way above the 0.02 percent level of countries that have come closer to eliminating drunk driving. In 2016, the Centers for Disease Control and Prevention estimated that inebriated individuals still drive over 110 million times annually. As of 2017, an estimated 10,500 people still die in alcohol-related crashes each year.

That is way too many, but should remind us that hundreds of thousands of lives have been saved since the Haddon and Kelley report of 1968. From a cultural perspective, drunk driving has become a stigmatized activity, no longer accepted with a wink. Sobriety checkpoints are now widely used to check motorists; 32 states mandate the use of ignition interlocks for first-time drunk driving offenders; and ride-sharing services encourage drinkers to prearrange rides home from bars. Meanwhile, Utah just became the first state to lower its acceptable blood alcohol limit to 0.05. Finally, and most intriguingly, technology may exist that will be able to test the ambient air in cars and prevent them from starting when the driver has been drinking.

Of course, this is still America, where such initiatives will thrill drunk driving reformers and infuriate libertarians.