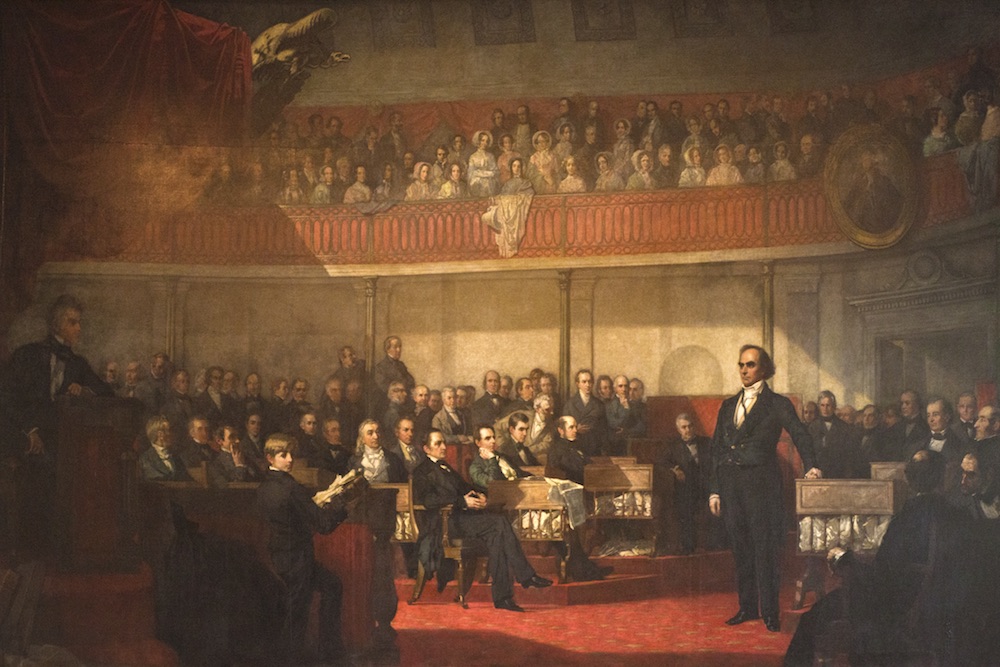 For generations, school children memorized the ending to Daniel Webster’s “Second Reply to Hayne,” delivered during the famous Webster-Hayne debate of January 1830. This most-famous-of-debates began in a modest fashion, with an argument over westward expansion and morphed into a discussion of tariffs and then nationalism versus states’ rights. Over time, the discussion came to symbolize something much more about American unity, as Webster’s soaring defense of nationalism and American nationhood, crowned with the words “Liberty and Union, now and forever, one and inseparable,” became a civics lesson in the meaning of American union and a model of impassioned oratory (emphasis added).

After April 1861, Webster’s discourse on nationhood took on added meaning as its horrific premonition of disunion came true, and four years of civil war left the nation’s soil “drenched in fraternal blood.” To Americans of the late 19th century and well through the 20th century, Webster’s words became one of America’s defining texts on nationalism, a call to embrace national unity and cast aside petty sectional differences.

Even though the speech is no longer taught in schools, there’s much to be gained from reexamining Webster’s and Hayne’s words today—as well as the speeches that followed their forensic battle on the Senate floor. A close read offers us crucial insight into the state of our Union, and how it is that the nation is still divided over shifting notions of nationalism and sectionalism, states’ rights, and robust federal power.

Then and now, Webster’s dazzling oratory tends to overshadow the underlying meanings behind the Webster-Hayne debate. The 48-year-old lawyer and statesman had served two stints in the House of Representatives, one from New Hampshire and the other from Massachusetts, and his oratorical skills, honed in the courtroom and on the floor of Congress, had already gained him national recognition. His eulogy for John Adams, delivered in Boston’s Faneuil Hall, solidified his reputation as America’s finest public speaker.

What gets less attention is the evolution of Webster’s thoughts on the nation itself. By 1830, Webster believed that the United States was a nation created by the people and held together by a single, strong national government actively working for the common good. Individual states composed the Union, but Webster saw them as subordinate. Webster’s definition of union fit perfectly with the political and economic outlook of New England of that time. During the 1820s and 1830s, the Northeastern states had become a commercial powerhouse as manufacturing transformed the region and its economy. The New England manufacturers who devised the American conception of corporations needed and demanded that the national government protect their economic interests. Only a powerful, centralized government, they and Webster believed, could build the American economy and keep the Union alive. Webster’s ideas at this time bear close similarity to those of Alexander Hamilton, who would have heartily agreed with all that Webster endorsed.

Yet Daniel Webster and his New England constituents had not always endorsed this neo-Hamiltonian economic program and the expansive definition of federal power. In fact, during Webster’s first period in the House of Representatives, which coincided with the War of 1812, the young congressman had spoken harshly of the war and the federal government that supported it. By 1814-15, when they met for the Hartford Convention, the New Englanders endorsed sweeping changes to the Constitution that would have curtailed federal power. A few voices even spoke of secession—though the convention rejected any notion of the idea of disunion. But in the context of the war’s close and the triumph at the Battle of New Orleans, the Hartford Convention’s states’ rights and anti-nationalist proposals, appeared extreme—even disloyal. The Federalist Party, which had drawn its greatest strength from New England, died after the war as a wave of nationalism spread across the nation. For a decade thereafter, New England Federalists, Webster among them, faced a backlash from the Hartford Convention and their dissent against the War of 1812.

But by the mid-1820s New England had undergone an economic and political metamorphosis. So, on the eve of the Webster-Hayne debate, Webster, now a senator from Massachusetts, had transformed into an ardent nationalist.

Still, strong divisions over federal power persisted in the nation: At the very moment that New England found nationalism, the South lost it. Though Southerners had supported the War of 1812 and the wave of nationalism that followed its conclusion, the year 1819 marked the beginning of the end for Southern nationalism. The economic panic of that year depressed agricultural markets and destroyed the postwar land boom that had fueled explosive growth in the South and West. Rural Southerners found blame in many places, but reserved special wrath for the Bank of the United States, a sort of precursor to today’s Federal Reserve. When in 1819 the Supreme Court decision in McCulloch v. Maryland upheld the federal government’s right to charter a national bank, Southerners became incensed at what they defined as an abuse of federal power. Finally, 1819 also saw the beginning of the Missouri controversy over slavery in the territories. To defend slavery and the economy based upon it, Southerners slowly abandoned nationalism in favor of states’ rights.

Though history has all but forgotten Webster’s debate partner, South Carolina Senator Robert Y. Hayne, he represents well the Southern shift away from nationalism and toward states’ rights. With a mindset forged in the South’s growing consciousness as a persecuted minority, Hayne clung to states’ rights, believing that the Union was a confederation of sovereign states, with each delegating only a few specific powers to the national government. A disciple of John C. Calhoun, Hayne abhorred the exercise of federal power, which by 1828 had centered on a tariff that Southerners argued protected those burgeoning New England manufacturers, all at the expense of the Southern cotton planters. By then, Hayne had arrived at the conclusion that an individual state could nullify any federal law that infringed on state sovereignty. If nullification did not produce the desired result, secession became an option. By 1830, Hayne and his followers, the Nullifier Party, believed that Daniel Webster and the North’s vision of union posed a long-term threat to the South and its slaveholding regime based on cotton.

Americans still argue about states’ rights and nationalism and how we divide sovereignty. The Webster-Hayne debate, read anew in its entirety, shows modern Americans that nationhood has always been complicated.

Webster and Hayne’s senatorial battle came in January 1830 amid a debate on Western lands. Hayne sensed an opportunity to ally the West with the South against New England and took to the podium to lecture the Senate on Northern oppression of the agricultural South and the Western frontier. Westerners, he argued, “had some cause for complaint” over the stifling regulations imposed upon them by New England. The South, too, had suffered oppression by the “meddling statesmen” of the North, as tariffs filled the pockets of New England manufacturers. Nationalism, which Hayne labeled as “consolidation,” came at the expense of the “independence of the states.”

Webster, for his part, responded with a crushing rebuttal that portrayed New England as the defender of true American nationalism. “Consolidation!—that perpetual cry of both terror and delusion—consolidation!” he argued, conveniently ignored the role that federal power had played in the settlement of the West, and even the entire nation. In chastising Hayne’s view of the federal government as an agent of consolidation and oppression, Webster portrayed it as an agent of positive power that could benefit the public.

Which senator had defined American nationhood correctly? The closest attempt at a satisfactory answer emerged after Webster and Hayne had concluded their remarks. Webster and Hayne had staked out two visions of the Union that seemed like polar opposites, but that was not the end of the discussion. Between January and May 1830, 21 of the 48 senators delivered 65 speeches on competing ideas of nationalism and states’ rights. Most are forgettable, to put it charitably. One Louisiana senator, however, offered an original contribution on the fundamental contradiction in American nationalism. Edward Livingston, a veteran politician and associate of President Andrew Jackson, argued that the United States was a federal union, a unique creation in which Americans had divided sovereignty between the states and the national government. The drafters of the Constitution of 1787—the failure of the Articles of Confederation, America’s first constitution, fresh on their minds—brokered a compromise in which states and the federal government shared power. “Let the partisans on either side of the argument,” Livingston concluded, “be assured that the people will not submit to consolidation, nor suffer disunion; and that their good sense will detect the fallacy of arguments which lead to either.” The compromise worked, as Livingston suggested, but the debate over how to divide power has persisted throughout American history.

On nullification and disunion, however, Livingston took sides decisively with Daniel Webster against Robert Hayne. A state could not nullify a federal law or dissolve the Union. The American constitutional system did not allow for either option. Livingston’s ideas followed those of his boss, Andrew Jackson, who denied nullification during the course of the Webster-Hayne debate with his memorable toast to Calhoun, Hayne, and the Nullifiers, “Our federal union: it must be preserved!”

Livingston’s words more accurately define American nationhood than those of the debate’s two protagonists. In modern times the United States probably leans more toward Webster’s vision of union, but Americans still argue about states’ rights and nationalism and how we divide sovereignty. The Webster-Hayne debate, read anew in its entirety, shows modern Americans that nationhood has always been complicated.