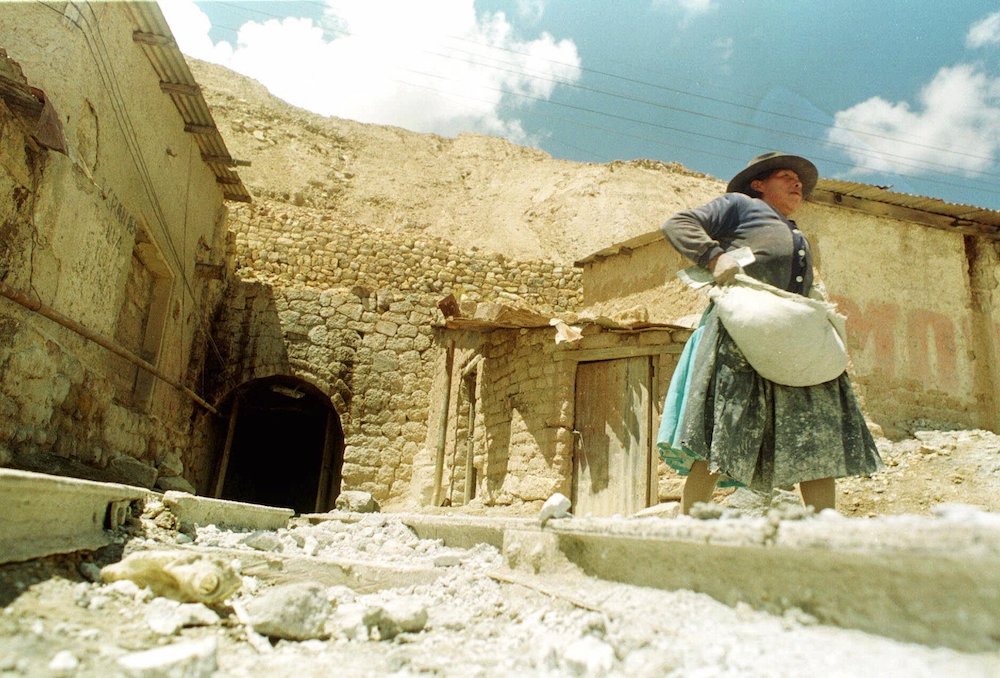 Isabel Elias carries a bag of mineral rocks that she will crush outside of the Cerro Rico mine in Potosi, Bolivia, in December 1998. Courtesy of Associated Press/Victor Ruiz.

Gold has always attracted special attention for its color, malleability, and resistance to oxidation, but silver has long held a close second place. Its relative abundance in relation to gold and its relative rarity in relation to metals such as copper made it ideal for global coinage. Silver was a metal that crossed international boundaries in compact but stout units, always welcome in settling accounts.

In early modern times, and really up until the 20th century, one could argue that silver, not gold, was the precious metal that ruled the world. Though minted in Spanish America or Europe, silver coins could be used to buy pepper in Sumatra or cotton fabrics in Bengal, and the same money could be spent on troops or warships. Any monarch or state with ready access to silver harnessed the sinews of war.

But to understand what the costs and benefits of this first global currency were—how it changed the lives of the people who mined it and the natural environments that were upended along the way—consider the story of Potosí, a silver mining town established in highland Bolivia in 1545. Potosí offers sharp lessons about who wins, who loses, and how profoundly a mother lode of shiny metals can shape a region over the course of nearly 500 years.

Potosí, located at a breathtaking 13,200 feet above sea level in the eastern cordillera of the Bolivian Andes, still produces silver today, but miners tend to make more money from related base metals, mostly zinc and lead. In the 19th and early 20th centuries, when silver first went bust, Potosí’s salvation was tin. For a very long time, the Rich Hill, or Cerro Rico, of Potosí had it all, save gold.

But today the city fights for its life amid a drying climate and collapsing, over worked mines. The talk of the town today, despite its toxic environment and challenging altitude, is tourism. The fact that Potosí still lives by mining after nearly 500 years is a riddle that only makes sense in a woefully poor and underdeveloped country.

And this tension—how a place so rich in natural resources could remain so impoverished—has made Potosí a poster child of the so-called resource curse. Locally, the Cerro Rico was and remains the “mountain that eats men.” In colonial times, many of those men were native Andeans sent underground or into mercury-soaked refineries against their will, while the fortunes of Spain’s kings rose and fell on Potosí silver futures. In his still-popular polemic on underdevelopment, Open Veins of Latin America: Five Centuries of the Pillage of a Continent, the Uruguayan writer Eduardo Galeano declared Potosí the epitome of colonial excess.

But a closer look at historical sources suggests that Potosí was something more complex and contradictory than the passive canvas for Spain’s “giant sucking sound” imagined by Galeano. Yes, the colonizer exhausted the mountain. Yes, the colonizer shamelessly abused Bolivia’s native Andean population. And yes, everybody inhabiting Potosí abused the natural environment, fouling streams and stripping every twig from every bush or tree for hundreds of miles around. Indeed, for its first hundred years Potosí could be described as an oasis of horror in a sea of ichu grass—an early modern nightmare.

Countless Andean workers and generations of outraged Catholic priests pled the case for reprieve before the Habsburg monarchs of Spain only to see the infamous draft of indigenous labor, the mita, revived again and again.

Yet, even with this dark knowledge in mind, one stumbles upon paradoxes that complicate the story. The search for silver was not monopolized by European colonizers, and control over the mines and their products was always contested. Though disadvantaged by law and custom, some native Andean miners and refiners made fortunes. Andean women drove a thriving informal economy by seizing on the city’s insatiable need for food and drink, aided by an accidental royal tax exemption.

Unintended consequences and spontaneous acts of charity abounded despite an atmosphere of greed and shortsightedness. The complexities of mining and refining, particularly as shafts dove deeper and ores grew refractory, led to a wide range of technical innovations that then reverberated around the region and the globe. While Potosí’s royal mint was staffed almost entirely by enslaved African men from Angola and Congo, the coins it produced supplied the world with ready money, which transformed societies in ways both positive and negative everywhere it traveled.

As early as the 1590s, Potosí’s decade of peak production, the city, mines, and refineries prefigured industrial capitalism at its best and worst, its most innovative and its most destructive. Stamp mills crashed all night, and miners worked around the clock. Everyone suffered the effects of airborne mercury, lead, and other toxic metals in addition to consuming foul water. Yet financial innovations followed on technical ones, giving rise to whole new classes of entrepreneurs, among them the long-distance coca traders of Cuzco, Peru. Merchants from Lima, Peru, brought Chinese silk, Basque iron, and Sri Lankan cinnamon to a wide range of colonial consumers. Potosí consumed the world even as the world consumed Potosí.

A fountain of fortune, Potosí’s iconic Cerro Rico promised socioeconomic gain for all types of people and both sexes, transforming a rigidly hierarchical world where self-fashioning was dangerous. Women and men from many corners of the world came here rather than to Madrid—the center of empire—to flip their own fortunes. With a restless population well above 100,000 at a time when Paris and London were not much bigger, Potosí was a beehive of opportunity for smooth and rough operators: pickpockets, pícaros, charlatans, and assassins. The city’s brothels and gambling dens were infamous, as were its comedians and other entertainers. For over 100 years Potosí boomed before its first great bust.

Another paradox of Potosí was its longevity. The Cerro Rico sputtered after 1650 but never gave out. It was still mined in 1825 when Simón Bolívar climbed it to celebrate his liberation of a continent.

When the Spanish colonizers left Potosí in the 1820s, the British, French, and ultimately Yankees came, each seeking to do what they believed the despised Spanish had been too stupid or technologically backward to do. In reality, it was Bolivians, including native Andeans as well as the descendants of Spaniards, who kept Potosí alive in the 19th century, often reviving old technologies and managing risk in ways not amenable to industrial capitalism as practiced in the Northern Hemisphere. There were ways to mine silver without thinking of how to maximize returns to shareholders.

As early as the 1590s, Potosí’s decade of peak production, the city, mines, and refineries prefigured industrial capitalism at its best and worst, its most innovative and its most destructive.

There was always more silver inside the mountain, which many believed to be magical, a mother’s womb or Pachamama capable of regeneration. Even in the earlier years, when times got hard, mine owners and native prospectors fanned out into the countryside in search of new bonanzas, transforming a distant mountain or remote range into a fleeting shadow of the great Cerro Rico. Each hinterland boom produced its own wave of violence, harsh justice, wasteful spending, and environmental destruction, but each also produced new innovations amid labor shortages and discoveries of different ore types. One such innovation—born of short hands and hard rock—was to blast out ore with black powder, not safe, but effective.

Only with cyanide processing, hydroelectricity, and railroads in the early 20th century did Potosí begin to look something like a Leadville, Colorado, or a Virginia City, Nevada. A modern brewery arrived to supply miners with Potosina Pilsener by 1907.

But there was always something different in Potosí despite the modern accouterments, something ancient. As in colonial times, modern mining in Potosí has always toggled back-and-forth between the big and the small, the heavily capitalized and the informal or cooperative. A main driver of these swings has been the perennial uncertainty of global commodity prices, coupled with Bolivia’s extreme poverty and shifting government directives.

Eduardo Galeano may be right that what matters in the end is underdevelopment, extraction without compensation, wanton brutality, enduring racism, environmental degradation, all the worst effects of the resource curse in a former colonial backwater. Outsiders are to blame, from Spaniards to Yankees.

But if one asks Bolivian miners inside the Cerro Rico today what they make of Potosí’s strangely durable legacy, they are apt to say that the whole thing, from the very start, has been a devil’s bargain. The resource curse set loose in Potosí now lives inside us all.