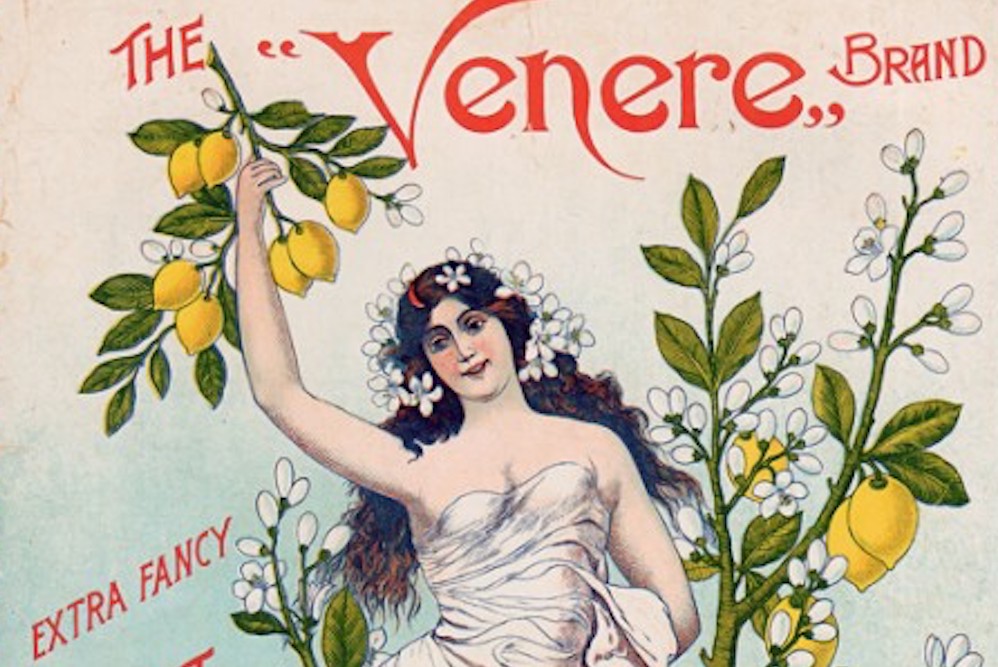 When I started writing a book exploring the crucial contributions that Sicilians had made to New Orleans food culture, I sat down to talk with fabled restaurateur Salvatore “Joe” Segreto. “You’re not going to do one of those “who killa da chief?” histories, are you?,” was the first question he asked me.

Segreto referred to a familiar catcall heard by Italian kids growing up in New Orleans, forged in the bloody aftermath of the assassination of the city’s police Chief David Hennessy in 1890—and the acquittal and mob-lynching of 11 Sicilians for his murder five months later.

Segreto’s disdain for the topic was justifiable: Popular takes on the Sicilian past in New Orleans often degenerate into reductive tales of Mafiosi and peasants, thanks in part to all-too-frequent retellings of the death of “da chief.” But, as Segreto knew, the real story of Sicilians in New Orleans is far more complex, with roots in the lemon groves around Palermo, Sicily. In fact, Sicilians all over the U.S. arrived here because of lemons.

Sicilian citrus traders came to New Orleans in the 1830s, and by the end of the Civil War were on their way to dominating the city’s food commodity trade. These merchants drove the growth of New Orleans’ port into the engine of the food system linking the Mississippi River Valley with the Midwest. Sure, some Sicilians in New Orleans made fortunes in illegal schemes—but far more opened legendary restaurants, like Commander’s Palace, whose global reputation helped to establish the city’s reputation as a food destination. Other empires they built remain very much with us—Progresso, which has been selling ready-to-eat riffs on Italian soups since 1925, and the company now known as Dole Food Company, which was formerly the Vaccaro brothers’ Standard Fruit Company. Few Americans enjoyed pasta before 1900, but the vast quantity manufactured in the French Quarter propelled it into the mainstream by 1920.

Yet citrus was the foundation. If you bought a lemon almost anywhere in the world before 1900, even in California, it was likely that the fruit in your hand had come from Sicily, and that a prosperous Sicilian immigrant had had something to do with it. A thousand years ago, under the hills of Palermo, Muslim conquerors began building a complex, gravity-fed, irrigation system. It hydrated the arid, volcanic soil and produced nearly ideal conditions for growing citrus—and in particular, lemons. The ability to control the flow of water to the groves around Palermo allowed farmers there to force trees to flower and fruit several times a year.

The Sicily lemon became globally famous in the 19th century, when the Pax Britannica made international shipping less expensive and riverine steamboats opened markets in continental interiors. The fruit was ideal cargo because it could be picked green, and if properly stored, would actually improve over a long sea voyage. The crossing from Palermo to New Orleans could take over 100 days.

The first lemon cargoes arrived at New Orleans in the 1830s, amidst a period of skyrocketing growth in the city. Steamboats opened the Mississippi River Valley to commerce, and steam tugs towed large oceangoing vessels 70 miles upriver to the city’s bustling wharves. Until railroads began to offer competition in the late antebellum period, New Orleans enjoyed uncontested status as the gateway to America’s Upper Midwest.

And lemons were critical to life in the 19th century, far more than they are today. Even though the importance of vitamin C wasn’t fully understood until the early 20th century, regular consumption of citrus was already considered vital to health. Lemons were popular in cooking; open any 19th century cookbook to the beverage pages and most recipes will ask you to “juice a dozen lemons.” And until World War I, the burgeoning canning industry depended on lemon juice and peels as its primary source of citric acid, which was necessary for preserving flavor and color.

The Sicilian merchants who first brought the citrus trade to America ultimately dominated all of the wholesale fruit business in the nation, and before 1850, the number of Sicilians in New Orleans kept pace with the number in New York. They established trading houses along Decatur Street and in the rapidly Italianizing French Quarter. They diversified the goods they handled—selling locally grown citrus, Midwestern apples and pears, and imports like Smyrna figs and (as they spelled the fruit then) Honduran cocoanuts, yet lemons always remained crucial. As late as 1884, lemons represented New Orleans’ third most valuable imported commodity, behind only coffee and sugar.

The ships also brought people: Most Sicilian immigrants to the U.S. came on ships operated by the Mediterranean citrus fleet. When the transatlantic citrus fleet modernized in the late 1870s, the voyage time between Palermo and New Orleans to was slashed to just 29 days—and the same Sicilian tycoons who had dominated the nation’s fruit business emerged as padrones, labor agents who contracted passengers to work in the Gulf South and elsewhere in exchange for Atlantic passage. Agents crisscrossed Sicily seeking workers for New Orleans. Once they got there, these new immigrants, for the first time, met countrymen who for generations had lived only a mountain range away. The city’s French Market soon resonated with the island’s obscure Italian, Greek, and Albanian dialects. Through the lemon trade, the city of New Orleans became a crucible in which people forged an ethnic identity—“Sicilian”—out of what were really disparate cultural traditions. 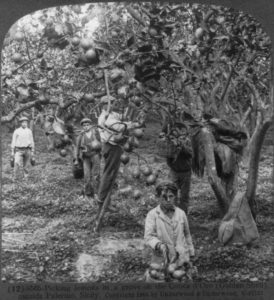 Sicilian lemon pickers, like these near Palermo in the early 1900s, made their way to the United States. Courtesy of the Library of Congress.

Many were farmers, laborers, and produce peddlers, but to be Sicilian in New Orleans did not necessarily mean remaining poor and unassimilated. Some Sicilians belonged to the Southern Yacht Club, a prestigious association founded by the city’s elite in 1849, including two restaurateurs who even sponsored trophies for annual regattas. Indeed, by the middle of the 1890s, the Italian names of the well-to-do merchants began appearing next to notable Gallic and Anglo-Saxon ones in the social pages of newspapers. The Sicilians were notable for how quickly they were joining New Orleans’ culture, and the legal fortunes they were amassing were overshadowing those of their neighbors.

Even as a flood of immigrants arrived with the citrus harvest every fall, New Orleans’ Sicilian merchant class set its sights on greater fortunes, branching into the shipment and sale of bananas after the advent of refrigeration in the 1890s. In doing so, they revealed a willingness to take a risk on something new, a vision and dynamism unusual in a city already known for its complacency towards innovation.

It was against this backdrop, along the city’s fruit wharves, that a feud between warring stevedore gangs led by the Matranga and Provenzano clans—both seeking to control trade and handling at the port—climaxed with the assassination of Chief Hennessy.

David Hennessy, most famous for the 1881 arrest and deportation of the Sicilian bandit Giuseppe Esposito, had become chief of police as part of an 1889 political sweep by Reformer Party candidates who opposed the local urban machine called “the Ring,” which enjoyed deep support from the city’s Irish, German, and Sicilian immigrants and Catholic Creoles. He intervened in the Matranga-Provenzano feud on behalf of the Provenzanos; the Matrangas were thought to have had ties to Esposito. After Hennessy was murdered in late 1890, the police rounded up scores of Italians, including many with links to the Matranga family. When a jury acquitted the suspects five months later, the local press and Reformer political figures called for vigilante justice. On March 14, 1891, a mob of over 1,500 people stormed the Marais Street Prison and shot or hanged 11 of the accused men.

Were the Matrangas and Provenzanos Mafiosi? Certainly they were padrones—part of a system that was ripe for abuse, which would become illegal in 1905. Their employees, like all longshoremen, worked in gangs, were loyal to their employers and each other, and sometimes resorted to violence to protect their jobs. But they weren’t organized into any sort of crime syndicate. They were making too much money already, through legal commerce.

If you bought a lemon almost anywhere in the world before 1900, even in California, it was likely that the fruit in your hand had come from Sicily, and that a prosperous Sicilian immigrant had had something to do with it.

Rather, the cotton and sugar traders who lynched New Orleans’ Sicilians were pushing back against a subtler threat. In perhaps killing a corrupt police chief, Sicilians had resorted to the sort of extralegal violence that white Southerners believed was reserved for them alone. Indeed, when the Reformers called the lynch mob to action, they likened it to a similarly violent White League uprising against Louisiana’s biracial government, also led by men of their class. Whether real or imagined, Mafia violence paled in comparison to the casual and widespread white-on-black brutality commonplace at the time.

Commercial envy was also a powerful ingredient. The lynch mob represented an old white mercantile elite in the midst of an economic crisis—manacled to cane sugar, which was plunging into global collapse, and to cotton, which had been in steady decline for three decades. In the meantime Sicilian traders, who had cast their lot with emerging commodities like lemons and bananas, had ascended to the ranks of the city’s wealthiest.

In the end, as both social instruction and commercial intimidation, the Hennessy riot was mostly a failure for the white elite. Charles Matranga, the supposed head of the murder conspiracy, walked out of Marais Street Prison unharmed and enjoyed a productive career for the next four decades—undermining dubious claims by the lynch mob that it wanted to clean out the Mafia. Nor was there any resisting the commercial might of Sicilian shipping and capital, or their incipient social ascendancy.

Still the legend of “who killa da chief?” endured. It spoke to what we, as Americans, like most to believe about Sicilians. It is a false parable rooted in truth, nurtured and kept alive by elite keepers of history, men who belonged to the social class of the lynch mob, who sought to diminish those who dared to challenge their exclusive right to rule.

We don’t remember the Sicilian citrus trade today, in part because it changed so dramatically in the early 20th century. California growers engaged in an aggressive tariff campaign to crush Mediterranean citrus—and it made selling Italian lemons untenable in the U.S., even though they were better tasting. Similarly, modern popular culture’s ardent, revisionist focus on gangster stories—what you might call the “Godfather effect”—has blotted out the truer story of how Sicilian-Americans—in New Orleans and elsewhere—changed the way all Americans eat.