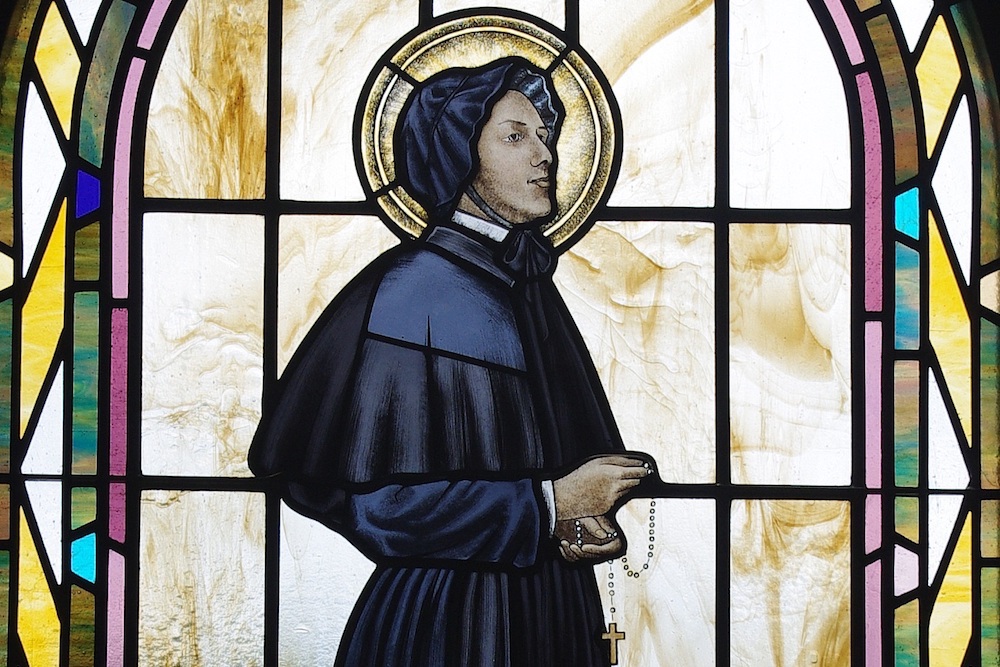 Elizabeth Seton, for whom hundreds of Catholic parishes and schools are named, was the first native-born American citizen to be made a saint in the Roman Catholic Church. Her 1975 canonization was the result of decades of labor by admirers who sought evidence of Seton’s “heroic virtue”—and miracles. Those admirers, who oversaw Seton’s presentation in Rome, also shaped an enduring story about the society in which Seton, who was born in 1774 and died in 1821, lived.

The narrative is not false: Seton converted to Catholicism from her family’s Episcopal faith. And the mistrust she faced reminds us that what is now America’s largest denomination was believed by many at the nation’s founding to be incompatible with American values. But the conventional story of Seton’s life focuses on religious prejudice at the cost of acknowledging the subtler ways that Americans found opportunity and challenge within the new nation’s raucous cacophony of religious possibility.

Seton spent her childhood in a New York City scarred and depopulated by the American Revolution, but bursting with energy, ambition, and ideas. Many educated Americans, including Thomas Jefferson and John Adams, showed little interest in Christian orthodoxy or doctrinal disputes, instead believing religion’s central purpose was the creation of ethical, happy individuals. As a young woman, Seton shared this view, reading contemporary philosophers such as Rousseau and Voltaire and believing that no faith was superior to others. Yet she was also fascinated by the varieties of religious expression that were developing in her city; later she would recall her pleasure in Methodist hymns and in the deliberately plain style of Quaker dress. 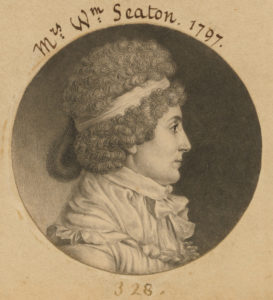 The future Catholic saint knew nothing of Catholicism, even though the church was growing in numbers and confidence in 1790s New York. In the Anglo-American imagination, the faith had long appeared as the religion of priest-ridden wretches in the service of a Roman conspiracy to destroy liberty. During the colonial era, practical alliances between Native Americans and the French, many of them Catholic, heightened mistrust, and, after the Revolution, challenges remained. New York’s constitution required officeholders to forswear “all foreign ecclesiastical authority” and immigrant Catholics had to renounce allegiance to the pope before they could attain citizenship. John Jay, the first chief justice of the United States, argued that religious liberty for everyone else required the suppression of Catholicism, a faith whose adherents would seek to overthrow constitutional protections.

Yet, as Seton came of age, the power of these views was fading. The Revolution had found Catholic colonists fighting as patriots and a French Catholic king aiding rebellion against an English Protestant one. Manhattan also had a tradition of opting for fractious comity over orthodoxy of any kind, and wealthy Catholics found no bars to their business dealings. Conscious of both mistrust and opportunity, the nation’s first Catholic bishop, John Carroll, crafted a style of Catholicism that adhered to church teachings while studiously avoiding giving offense to Protestant neighbors.

Elizabeth Seton’s conversion to Catholicism began with a turn toward formal Christianity. A happily married mother in her late twenties (she eventually bore five children), she faced the terror of her husband William’s failing health and bankruptcy—not uncommon threats in those turbulent years. When a charismatic new minister arrived at Manhattan’s Trinity Church, Seton’s spirituality for the first time became connected to an institution. The Reverend John Henry Hobart gave richly emotional sermons while also emphasizing the importance of Episcopal traditions and the priesthood—serving up yet another religious possibility in a city that offered many. Seton was moved, attending services as often as she could and, in contrast to her earlier ecumenical views, urging others to do the same. She now thought that religious devotion was not only a way to produce ethical individuals, but also an obligation that required worshipping in a particular way.

When her husband’s health worsened and his merchant enterprise failed, the couple set sail to Italy, hoping that the climate would heal William and that Italian business associates, the Filicchi family, would restore his business. But William died within weeks of their arrival. And the Filicchi family soon introduced Seton to Catholic teachings and to the artistic treasures of Florence’s churches. Her years amidst Manhattan’s diverse religions left her willing to attend Mass, and she found herself drawn to Catholicism’s teaching of transubstantiation and to its culture of saints. When she returned home after six months, it was as a new widow determined to become a Catholic.

Some family members worried she’d been taken advantage of by her Italian hosts. Her sister fussed over the “red-faced” congregants of St. Peter’s Church, presaging the class and ethnic prejudice that would fuel the rise of anti-Catholic nativism during the mass immigration of Irish and Germans that began in the 1840’s.

But many in Seton’s circle were merchants who had done business with and even socialized with wealthy Catholics, and like Seton, they were accustomed to living amidst New York’s many faiths. And Seton’s family, despite their distaste for her choice, kept supporting her financially. When she and her children lost their home, her sister took them in and even bought fish on Fridays so that they could meet Catholic dietary rules.

Eventually, a mix of prejudice and kindness illuminated how estranged Seton was becoming from her old social world. Eager to contribute to her own support, Seton made plans to teach school, and word spread that the Catholic convert might proselytize Protestant children. Two neighbors visited her with diplomacy on their minds, suggesting that Seton simply reassure them she would not seek to convert children to Catholicism, so that they might reassure everyone else.

Seton was having none of it. She told her neighbors she would like to convert Protestant children to Catholicism and refrained from doing so only because her priest told her not to. It’s hard to imagine a reply better calculated to unsettle her well-meaning visitors.

This friction between Seton and her neighbors is absent from most accounts of her story. It’s an important and telling omission, because a similar absence is common to conventional accounts of early American religion, which tend to describe Christian practice either as simple and uniform, or as part of a pitched battle between prejudice and tolerance.

Seton’s real story showed how much lay in between. Her actions elicited anger not only from people prejudiced against Catholicism, but also from people who felt they were being called upon to be tolerant of intolerance. After all, Seton wanted to proselytize because she believed only Catholics could go to heaven, an exclusivity that offended her family more than her choice of faith itself. More generally, Seton was refusing to keep private what New Yorkers felt must be private, lest social harmony and commerce become impossible. 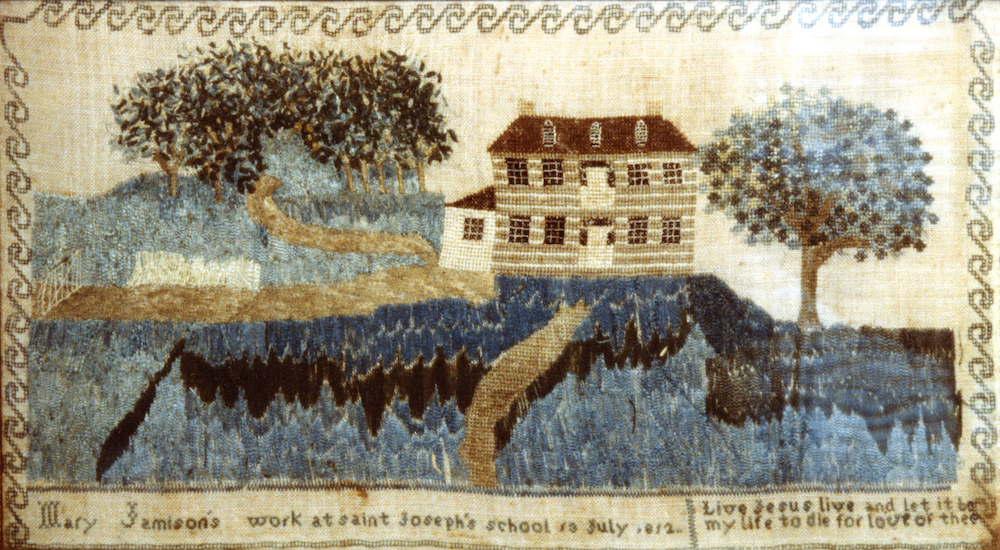 This needlepoint was completed by a student at the school Elizabeth Seton founded, Saint Joseph’s Academy and Free School. Courtesy of Catherine O’Donnell.

This irenicism was not simply a Protestant view. As Seton unsettled her neighbors, Michael Hurley, a young priest at Manhattan’s lone Catholic parish, was working to overturn the state’s restrictions on Catholic political participation. Like Seton’s Protestant neighbors, Hurley believed that religion was a matter of private conscience and should neither make claims on nonbelievers nor incur public punishment.

Seton was far from alone in her inclination to proselytize; the same religious diversity that made proselytization awkward, also made it likely. During the 19th century flowering of revivals known as the Second Great Awakening, those who were born-again felt a spiritual urgency that separated them from friends and family and often prompted them to try to persuade others of their beliefs. Across the nation, new religious societies were founded and churches planted, and New York City saw an ever-growing number of diverse congregations, some meeting in elegant new buildings, others in storefronts and attics. Within this flowering of expression lurked pain. Constitutional protections did not dull the sting when friends and relatives chose differently from among the profusion of possibilities, especially when their choices implied condemnation of one’s own.

In 1808, Seton left New York for Maryland, where she founded the nation’s first Catholic sisterhood. In the years that followed, she became a successful institution builder and an admired face of a church whose members remained a small minority within the country. Yet she was humbled by spiritual struggles and saddened by loss (including the deaths of two of her three daughters). She continued to believe Catholicism was the safest path to salvation, but no longer felt it was the only one. The cost of proselytization—in sundered relationships and civic mistrust—seemed to outweigh the benefits, not least because Seton no longer believed one person could persuade another to believe anything at all. Living her faith rather than proclaiming it was her ethos. In contrast to her earlier views, she insisted that the school she founded in Emmitsburg, Maryland, accept Protestant girls and not seek to convert them. The ability of her religious community, the Sisters of Charity, to flourish emerged in no small measure because she came to adopt the view of religion she’d once mistrusted—that it should and could be kept within the bounds of civility.

Seton was having none of it. She told her neighbors she would like to convert Protestant children to Catholicism and refrained from doing so only because her priest told her not to. It’s hard to imagine a reply better calculated to unsettle her well-meaning visitors.

The persistence of anti-Catholicism in the American experience was a challenge for Seton and other Catholics and converts. But it also helped inspire the desire for a saint such as Seton, who was so undeniably American.

Her sainthood recognized the Americanness of Catholics, but her story also should remind us that, since the nation’s earliest days, coexistence has required more than a lack of prejudice against a particular faith. And civility, while essential, is only a general answer to the challenges of pluralism; religious diversity poses its questions specifically.

Expressions of faith—and a desire to promote one’s discovered truth—can feel to one person like the fulfillment of religious liberty and neighborly obligation, and to another like their violation. The nation’s complex religious landscape creates a vibrant civic life in which a Rousseau-reading Episcopalian can one day become a Catholic saint. It also, as Seton learned, creates innumerable invisible borders between competing beliefs and nonbeliefs.