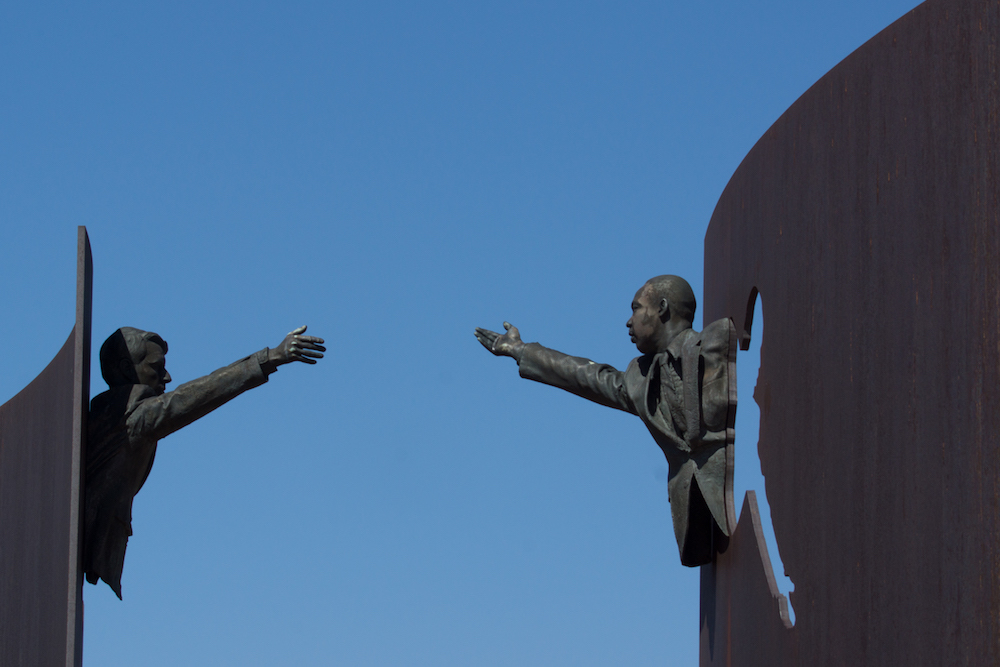 The City of Indianapolis’ Parks and Recreation Department administers the Dr. Martin Luther King Jr. Park at 1702 North Broadway Street on the city’s near north side. Within the park’s 14 acres are the usual recreational components of an urban park, including a basketball court, playground, softball field, picnic shelters, and an outdoor pool.

But as residents wile away the hours at play, their eyes are sometimes drawn to one of the park’s most intriguing features, a sculpture titled A Landmark for Peace. The memorial, placed in the park in 1995, was designed and executed by the late Indiana artist Greg Perry, and the bronze portraits were completed by Indianapolis sculptor Daniel Edwards. It is a monument to what happened in the park one day in 1968, as well as what didn’t, and, as its name suggests, it is also a statement about peace and the possibility of conversation.

The memorial features two curved panels facing one another, with the figure of a different man near the top of each panel. The men reach their arms out toward each other, though they don’t quite touch.

The two figures are Martin Luther King Jr. and the former junior U.S. senator from the state of New York, Robert F. Kennedy. Though they met in real life, they never met physically in this park. Still, they are forever bound together here, and in Indiana and American history, as well.

April 4, 1968 was a cold and windy evening, and a crowd numbering in the thousands gathered at Seventeenth and Broadway streets for an outdoor rally. At first, people, predominantly African-American, appeared to be in a festive mood. And why not? The audience would be among the first citizens of the Hoosier State to hear a speech from Robert Kennedy, a newly declared presidential candidate, who had announced his run for the Democratic Party’s nomination for president just two weeks before. Arriving late in the race for the nomination, Kennedy had decided to take his case directly to the people, by winning primary elections, instead of just maneuvering for nomination at the summer convention.

Many African-Americans had moved to Indianapolis in the time after World War II. Those who came North to live there had to deal with some of the same problems they had faced in the South, including segregation in education, housing, and public accommodations. But in Indianapolis, these subjects were not often confronted publicly. The Indianapolis Urban League and the local branch of the National Association for the Advancement of Colored People preferred negotiating quietly behind the scenes with local power brokers, both Democratic and Republican, to secure change. Among the crowd gathered at Seventeenth and Broadway streets for the Kennedy rally, however, were some people who had grown tired of the choices offered by America’s two political parties and were preparing for more radical action.

Kennedy’s advisers had cautioned him against entering the Indiana primary. They saw the state as too conservative, pointing to the strength of the Ku Klux Klan in the state during the 1920s, the fact that John Kennedy had run more than 200,000 votes behind Republican Richard Nixon in the 1960 presidential election in Indiana, and the strong showing of the segregationist, Alabama Governor George Wallace, in parts of Indiana in the 1964 primary. Kennedy’s anti-war views would also clash with Hoosier politics, as Indianapolis was home to the national headquarters of the American Legion and the place where Robert Welch Jr. founded the ultra-conservative John Birch Society to fight the supposed communist infiltration of the American government.

Jules Witcover, who covered every presidential campaign since the early 1960s, recalled being put off by the fact that Indianapolis was home to two huge war memorials (the Indiana War Memorial and the Soldiers and Sailors Monument). He spoke the feelings of many national media figures about Indiana in 1968 when he commented: “Were a Martian to land his flying saucer in Monument Circle, he might well take one look, climb back in and beat a fast retreat.”

Before traveling to Indianapolis, Kennedy had made two other campaign stops that day. During a question-and-answer session following his speech at Ball State University in Muncie, a young black man had asked Kennedy whether he could justify his belief in the good faith of white people toward minorities. The candidate answered that the majority of people in the country wanted to do “the decent and the right thing.”

As Kennedy boarded the plane for Indianapolis, he was informed that Martin Luther King Jr. had been shot as he stood on the balcony of the Lorraine Motel in Memphis, Tennessee, where he had been supporting the city’s striking sanitation workers.

When he arrived at Indianapolis’s Weir Cook Municipal Airport, Kennedy learned that the civil rights leader had died. Thinking back to the answer he had given at Ball State, a distraught Kennedy told a Newsweek reporter that it grieved him that he had “just told that kid this and then walk(ed) out and (found out) that some white man had just shot their spiritual leader.”

Word of King’s death was just beginning to reach people in Indianapolis, and some young black activists in the crowd who were waiting to see Kennedy began gathering support for violent action.

William Crawford, later a longtime state representative from Indianapolis and a formidable figure at the Indiana Statehouse, was, at the time of Kennedy’s appearance, a member of an organization known as the Radical Action Program. He and his friends were very close, he recalled, to resorting to violence as a way register their grief and rage at the loss of the civil rights leader. By one estimate, nearly 200 militants were sprinkled throughout the crowd. Those responsible for local arrangements for the speech, including respected Black Power leader Charles “Snooky” Hendricks, grew so fearful that Kennedy’s life might be in danger that they recruited people to check the area for possible assassins.

Tom Keating, a police reporter for the Indianapolis Star, who had raced to the scene with two policemen, noted that the crowd reacted to the news almost like “a wounded animal” and called the event one of the most “supercharged” he had ever witnessed.

After a brief statement on King’s death to the press assembled at the airport, Kennedy climbed into a car that would take him to the rally, jotting down some notes on what he might say on the back of an envelope.

John Bartlow Martin, an Indianapolis native and close adviser to Kennedy during the campaign for the Indiana primary, saw a local police inspector parked at the curb outside the hotel where the candidate’s wife was waiting for him to return from the rally. Martin went up to the car and asked the officer if the candidate should go ahead and address the crowd. “He said, with a fervor I imagine was rare in him, ‘I sure hope he does. If he doesn’t, there’ll be hell to pay.’”

Arriving at the rally, Kennedy, wearing a black overcoat that had belonged to his brother John, climbed onto a flatbed truck located in a parking lot near the basketball court. After asking for those waving signs and banners to put them down, he informed the crowd that King had been killed. The audience, which had been anticipating a raucous political event and for the most part had been unaware of the shooting, responded to the announcement with gasps, shrieks, and cries of “No, No.”

Tom Keating, a police reporter for the Indianapolis Star, who had raced to the scene with two policemen, noted that the crowd reacted to the news almost like “a wounded animal” and called the event one of the most “supercharged” he had ever witnessed.

Facing the now stunned audience, some of whom were weeping at their loss, Kennedy gave an impassioned, extemporaneous, six-minute speech on the need for compassion in the face of violence.

Kennedy recalled the words of Aeschylus, the Greek tragedian whose words from Agamemnon had comforted him following the assassination of his brother, President John F. Kennedy: “He (Aeschylus) once wrote: ‘Even in our sleep, pain which cannot forget falls drop by drop upon the heart, until, in our own despair, against our will, comes wisdom through the awful grace of God.’” He attempted to calm the crowd’s growing anger about King’s killing with words that have been commended by historians as some of the finest of the modern American era:

“Let us dedicate ourselves to what the Greeks wrote so many years ago: to tame the savageness of man and to make gentle the life of this world.

“Let us dedicate ourselves to that, and say a prayer for our country and for our people.”

The news of King’s violent death at the hands of a white gunman, James Earl Ray, had sparked outrage and violence across the country. But in Indianapolis the crowd at Seventeenth and Broadway had taken Kennedy’s words to heart and quietly left the rally and returned home. “We walked away in pain but not with a sense of revenge,” said Crawford.