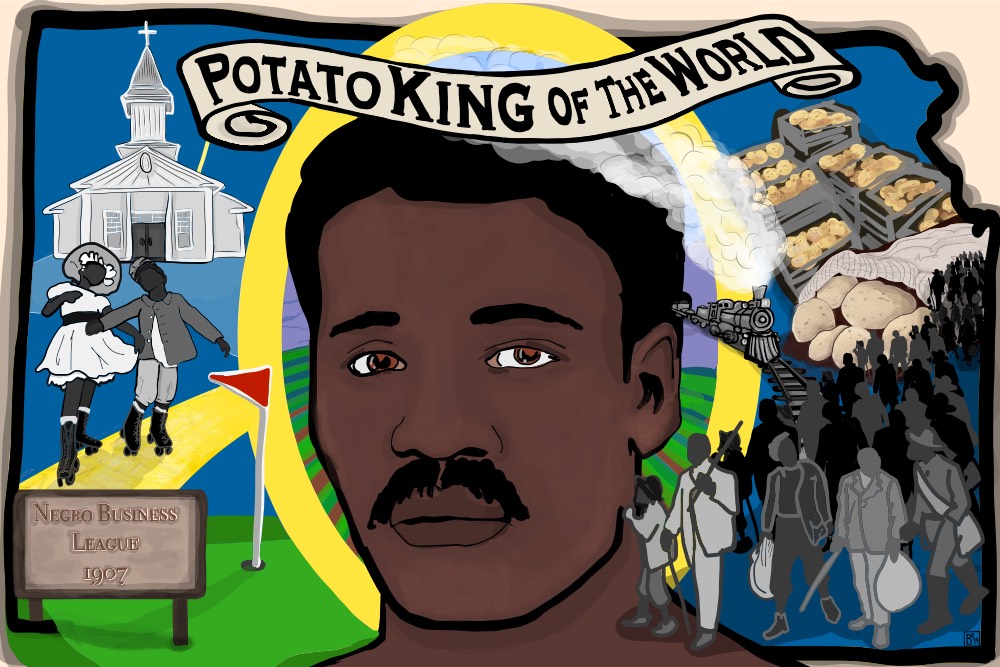 Junius Groves started life as an enslaved person in Kentucky. By the time of his death, he would be celebrated, by those fortunate enough to know his story, as an exemplary builder of community, and as the “Potato King” of Kansas and beyond.

Groves was born in 1859 and emancipated by the Civil War. Around 1880, when he was 19, Groves walked from Kentucky to Kansas City, Kansas, with other former slaves at his side. It was a 500-mile walk that became known as the Exodus, the first migration of blacks from the South after the war. He had only 90 cents with him.

Before the war, Kansas had been a dangerous place for black people. The 1854 Kansas-Nebraska Act, which nullified the Missouri Compromise of 1850, opened up Kansas to settlers, both pro- and anti-slavery, and the clashes between these new arrivals often proved violent. The legislature also enacted discriminatory laws, such as the laws allowing segregated schools that wouldn’t be declared unconstitutional until a century later, in the 1954 landmark case of Brown v. Board of Education of Topeka.

But after the Civil War, Kansas had a new appeal, particularly for formerly enslaved people. The wide-open state became a place to form new communities, perhaps most famously Nicodemus, an African-American homesteader community launched during Reconstruction.

Junius Groves was among those drawn to Kansas, but he didn’t like Kansas City, where many blacks had settled in segregated neighborhoods. He preferred the rural life, and was inspired by the success of some black farmers, who found the state particularly welcoming. He was not alone: By one historian’s reckoning, there were over 4,000 black farmers in Kansas between 1888 and 1920.

Groves started out as a farmer raising potatoes on six acres of a rented farm. But his success at growing was such that he soon prospered. Landowners appreciated him, and the trust he’d cultivated with white farmers paid off when they allowed Groves to purchase some of his own farmland from them.

Potatoes grew well in this tough place. Groves managed to survive drought, heat, flood, cold, blizzards, and tornadoes. He met his wife, and they had 14 children, 12 of which survived. And he built a community around the family in hopes that the kids would stay close to him. Groves sent his sons to Kansas State Agricultural College and they helped him apply scientific methods to agriculture.

By 1902, he would be called the “Potato King of the World”—for growing more bushels per acre than anyone else. He grew so many potatoes that the Union Pacific Railroad built a rail spur to his farm so he could ship them as far as Canada and Mexico. By 1913, Groves owned over 500 acres in the Kaw Valley, producing 55,000 bushels of potatoes a year.

His own house was a 22-room mansion, with electricity, and hot and cold running water—and a ballroom. Keeping a close watch on his family and neighbors, Junius and his wife Matilda opened their home to others.

According to his great-granddaughter Joyce Holland Groves and great-grandniece Mary Kimbrough, whom I interviewed for my book on the politics of the Great Plains, the Groves constructed a roller rink on their farm in part because of their interest in assuring virtuous behavior. The rink no doubt was a source of recreation, but its location allowed the Groves to carefully nurture their children and the neighbor children.

Groves was devoted in other ways to creating community and opportunities for other people. He was instrumental in the 1886 founding of the Pleasant Hill Baptist Church in Edwardsville, Kansas, then a rural area but now an outer suburb of Kansas City, Kansas. The church served and continues to serve as a community connection, providing food and clothing for those in need. Groves also owned a general store, stock in mines and banks, and even a casket and embalming company. He co-founded the state’s National Negro Business League.

He died in Edwardsville in 1925, leaving a rich legacy of commerce, family unity, and community building.