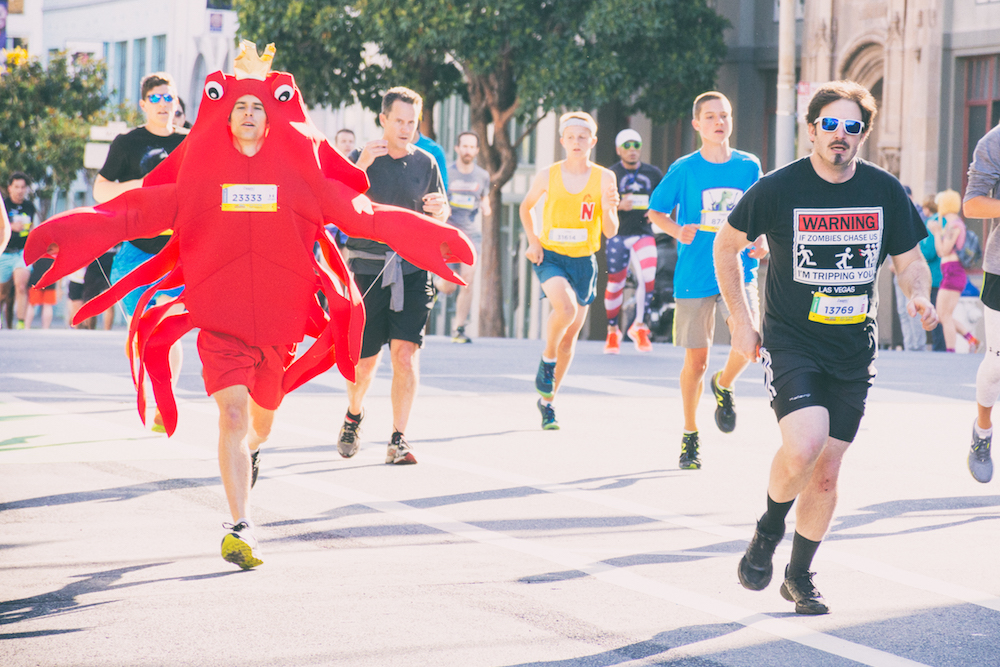 Runners at the 2016 Bay to Breakers race. Courtesy of David Goehring/Flickr.

My heart breaks for you.

My eyes cry tsunamis when I think of you.

But I must stop weeping now, so I can summon the strength to offer my condolences.

On behalf of my fellow Californians, please accept our thoughts and prayers on your city’s crisis. Depending on which media you read, you are now in collapse, having become a “hell hole,” a “failure,” and a “Third World” city. The Washington Post recently declared you dead (headline: “How San Francisco Broke America’s Heart”), and even the hometown San Francisco Chronicle says you’re a “mess” and “out of control.” At the cinema, the summer’s most beautiful movie laments the quasi-apocalyptic departure of your “last black man.”

My horror at reports of your death spiral is matched only by puzzlement at your continued existence. How does your small and lonely city, surrounded on three sides by water, even manage to get up in the morning and keep going on?

Maybe that question seems arch or insincere. But for Californians not from San Francisco, the most troubling part of your current crisis is that when we look at you—and your beauty, wealth, and success—we can’t understand what’s so wrong. You live in a hell so new and so different that we outsiders can’t contemplate how hot the fires must burn.

Take your wealth. Your income, investment, and housing prices make you among the richest cities on the planet, and people in Compton or Coalinga might assume that’s a good thing. But they don’t understand all that costs you! You can never build enough houses for all the wealthy people who want to live there. And then you fail to build enough housing for the people who clean up after the wealthy people—putting everyone on a collision course with everyone else. You are now a fallen urban paradise where tech bros leave garbage in Duboce Park one day, and people commute in for 90 minutes to sweep it up.

Then there is the moral hazard of total innovation. First the tech companies provided buses to take their employees to work—but how dare they! Protests sprang up in the streets. And so there was more innovation and now you can barely walk outside your door without tripping over the scooters of another of your billion-dollar companies trying to disrupt the sidewalk.

As your poor leave, you must look with great envy upon Bakersfield and Fresno, no. 1 and no. 2 among American cities by measures of extreme poverty, and wish you could be as real as they are. I don’t mean to diminish those cities’ struggles, but San Franciscans must endure the far greater difficulty of living among 42 billionaires—many of them young and eager to make the world a better place by using you as the petri dish for their plans—for artificial intelligence, universal income, eternal life, and digital currencies.

These are hardly the only maladies afflicting you. Your status as one of this country’s healthiest cities creates expectations for impossible perfection. Your grocery stores and restaurants are awash in vegetables and vegan offerings, exercise is readily accessible, and health care is available to all of your residents, regardless of immigration status. I can’t imagine the pressure of knowing that in San Francisco you have absolutely no excuse for eating badly or turning into a fat slob. And when you travel to other parts of this bloated country in your stringy, kombucha-fueled bodies, you must feel so desperately out of touch.

Yet that feeling is nothing compared to the head-pounding suffering you experience when you must choose from the myriad options for recreation, spiritual sustenance, and culture. I mean, say you want to go to the park, and your choices are Golden Gate, Dolores, and Presidio—who wouldn’t suffer a mental breakdown if forced to pick just one of those glorious public spaces? It’s even worse when it comes to the arts. I recently had a couple hours free in your city and fell to pieces trying to make up my mind about whether to do the de Young, the Palace of Fine Arts, or the Legion of Honor.

It’s only natural that, confronting choices incomprehensible to other Americans, you seek solace in nostalgic celebration. You’re positively obsessed with remembrances of your good old days—you know, when City Hall hosted dramatic assassinations, when you birthed strange serial killers, and terrible cults, and the AIDS plague, and when Dirty Harry represented a grittier San Francisco of 100-plus homicides a year. These days, a mere 50 people are murdered each year—leaving you with more living people to house while contributing to your perceived deficit of urban authenticity.

Despite all the strains of your current crises, you keep taking on more responsibility. Your ever-growing tech companies now hold sway over billions of lives that bear little resemblance to your own. And in an era when political power is poison, you are ingesting far too much for your own health. Your city provides us with the speaker of the House, the oldest member of the U.S. Senate, our governor, and soon, judging by the performance of Kamala Harris in the Democratic debates, the president. I fear that your city, under the weight of all that influence, may have to face the unthinkable terror of confronting your inconsistencies, not in the privacy of your 49-square-mile peninsula but in front of the whole world.

You’re positively obsessed with remembrances of your good old days—you know, when City Hall hosted dramatic assassinations, when you birthed strange serial killers, and terrible cults, and the AIDS plague, and when Dirty Harry represented a grittier San Francisco of 100-plus homicides a year.

And you bear that weight alone. When you have problems, you should be able to share your pain with others. But that’s hard for you, since your critics on the left and the right are always ready to jump on you. And if you complain about how tough things are, you just sound like those movie stars who tell glossy magazines how hard it is to be a movie star.

I’m not sure people really appreciate how unsettling it is to be you these days. Just as you stand atop the world, you’ve developed a case of vertigo worse than the one Jimmy Stewart had in that Hitchcock movie!

Sometimes when I ponder your predicament, I remember that old song, “Poor Little Rich Girl,” as recorded by Tony Bennett, whose heart keeps a rent-controlled apartment in San Francisco.

The craze for pleasure
Steadily grows;
Cocktails and laughter,
But what comes after?
Nobody knows!

And nothing is more frightening than uncertainty, especially when you’re wealthy. Poor little rich city! It must be torture to know that this might be the best things will ever get.

With all the pity in my heart,
Joe Mathews