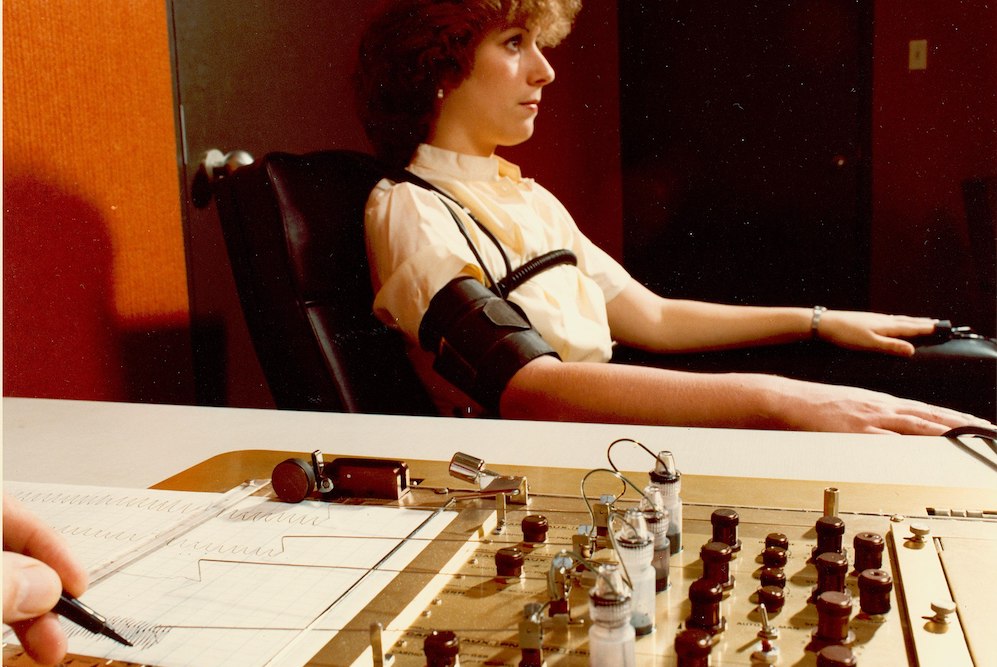 A government demonstration of the polygraph from the 1970s. Courtesy of the Federal Bureau of Investigation/Wikimedia Commons.

Francis Gary Powers had his first polygraph experience right after signing up as a pilot for the CIA’s U-2 program in January 1956. In his memoir, Powers described being called into a room where he was confronted with the question,

“Any objection to taking a lie detector test?” Though I had a great many, I didn’t voice them, shaking my head. If this was a condition of the job, I’d do it. But I didn’t like it. … I had never felt so completely exposed, as if there was no privacy whatsoever. If at that moment someone had handed me a petition banning polygraphs forever from the face of the earth, I would gladly have signed it. When I was asked the last question and the straps were taken off, I vowed that never again, no matter what the circumstances, would I undergo such an insult to my integrity.

Yet Powers would later take another polygraph test, with even higher stakes.

Powers’ case would be an uncommon one, but the polygraph was considered an essential tool in that period, for reasons that had little to do with getting to the truth. The polygraph was more of an attempted answer to a central Cold War conundrum: How could Americans fulfill their pledges to oppose an allegedly totalitarian enemy without becoming totalitarian themselves?

To square this particular circle, federal agencies, first and foremost the CIA, began using a controversial technology developed by psychologists in the early 20th century, and then refined and applied by the police and private businesses since the 1920s. Polygraph measurements—derived from changes in blood pressure, breathing depth, and skin conductivity of an electric current—have never been proved to be reliable indicators of deception. Not only is genuine emotional turmoil hard to reproduce in laboratory studies, but such emotional responses are not uniform among humans and can be imitated by countermeasures (such as pinching yourself before giving a response). In large screening tests, significant numbers of “false positives” (innocent people being labeled deceptive) are unavoidable.

In addition, the question of whether deception during a polygraph test indicates a person is unsuitable for employment transcends merely technical issues. In the final analysis, American security agencies never arrived at a definition of what personal characteristics a model employee should have. Instead, the polygraph provided reasons for dismissing a person as a security risk or denying him or her employment.

Bureaucratic usefulness, rather than any scientific validity, goes a long way toward explaining why the polygraph became a standard instrument of the American national security state. The case of Powers and his history with polygraphs is instructive.

From 1956 to 1960, 24 U-2 flights over the USSR yielded invaluable strategic intelligence on Soviet military capabilities. But on May 1, 1960, disaster struck when Powers’ plane was shot down over Sverdlovsk (today called Yekaterinburg). American authorities issued a cover story about a weather balloon gone astray and were caught flat-footed when Nikita Khrushchev presented to the world the remnants of the plane, and then the pilot himself. Powers had miraculously survived and was subsequently put on trial in Moscow and sentenced to 10 years in prison for espionage. In February 1962, he was exchanged for Soviet KGB colonel Vilyam Fisher (alias Rudolf Ivanovich Abel).

Powers returned home a hero under suspicion. Unbeknownst to him and the American public, doubts about his truthfulness arose due to National Security Agency intercepts of Soviet responses to the U-2 flights. Tracked radar signals indicated that Powers’ plane had dropped below its regular altitude of 65,000 feet, making it vulnerable to surface-to-air missile attacks. But Powers vehemently denied that he had allowed the plane to decline. The CIA, fearing for its then-stellar reputation with the American public, insisted on Powers’ innocence as well.

CIA director John McCone set up a board of inquiry under a federal judge, E. Barrett Prettyman, to prepare a statement for public consumption. The document highlighted that medical tests, a background check, and an interrogation had confirmed that Powers “appeared to be truthful, frank, straightforward. … He volunteered with some vehemence that, although he disliked the process of the polygraph, he would like to undergo a polygraph test. That test was subsequently duly administered by an expert. … [Powers] displayed no indications of deviation from the truth in the course of the examination.”

Contrast this with Powers’ own version of his treatment: Getting frustrated by “doubts about my responses, … I finally reacted angrily, bellowing: ‘If you don’t believe me, I’ll be glad to take a lie detector test!’ … Even before the words were out of my mouth, I regretted saying them. ‘Would you be willing to take a lie detector test on everything you have testified here?’ … I knew that I had been trapped.”

Since shortly after its creation in 1947, the CIA has used the polygraph as part of its personnel security procedures to ascertain the truthfulness of job applicants and employees and to confirm the bona fides of agents. At the height of McCarthyism, utilizing a machine known by the public as a “lie detector” made sense, especially for a brand-new agency that had to be staffed quickly. To its proponents, the polygraph represented a promise of objectivity and fairness along with effective deterrence of spies and traitors. As a CIA inspector general report from 1963 emphasized, “We do not and could not aspire to total security. Our open society has an inherent resistance to police-state measures.”

When challenged by Congress, which investigated federal polygraph use repeatedly beginning in the mid-1960s, the CIA defended the polygraph aggressively. In 1980, the Director of Central Intelligence’s Security Committee insisted: “The utility of the polygraph interview as part of security processing has been demonstrated by empirical means. … These practical results, plus more than thirty years’ experience, make the use of the polygraph in security screening truly unique and indispensable.”

Yet internally, CIA bureaucrats admitted that the practice of sorting out job applicants and employees based on their test results was questionable at best. Even after decades of polygraph practice, the CIA could not define what exactly it meant by elusive terms such as “routine” and “voluntary” in its polygraph program. A 1974 list of questions from polygraph examiners to the gneral counsel included the following query: “What can a polygraph officer say in response to the question: ‘Do I have to take this test to get a job with the Agency?’ or ‘What happens if I don’t take the test?’” The relevance of the evidence produced during most polygraph tests was also unclear. “The precise yardstick for the measuring of security reliability of an individual continued to be elusive,” an internal CIA history on personnel security concluded in 1973.

Up until his death in a helicopter accident in 1977, Powers insisted that he had acted as a loyal American under trying circumstances. No definite account of the incident has been established yet. We also don’t know what data Powers’ polygraph test produced. However, it is reasonable to conclude that the Kennedy administration found it advisable to assure the public of Powers’ truthfulness, and that announcing that Powers had passed a polygraph test was part of their public relations strategy.

At the height of McCarthyism, utilizing a machine known by the public as a “lie detector” made sense, especially for a brand-new agency that had to be staffed quickly. To its proponents, the polygraph represented a promise of objectivity and fairness along with effective deterrence of spies and traitors.

Powers’ experience highlights three ambiguous characteristics of polygraph use by the CIA for purposes of “national security.” First, the claim by polygraph proponents that the test could be a witness for the defense, exonerating loyal citizens, often turned out to be less than clear-cut. Second, while the polygraph relied on the rhetoric of voluntarism, in reality the pressure to take the test often mocked the idea of a free decision. Third, polygraph exams often served to provide official cover rather than revealing the truth of events.

Other questions haunted the polygraph throughout the Cold War, and the often-traumatic experience of the test provoked fierce protests from Americans across ideological lines. Journalists Joseph and Stewart Alsop, two otherwise unrelenting Cold War boosters, compared the polygraph to the embrace of an octopus whose “electric tentacles” produced an “overwhelming impulse to tell all … in order to appease the octopus machine.” Even former chief of CIA counterintelligence James Olson called polygraph exams “an awful but necessary ordeal. We all hate them. … A polygraph examination … is rude, intrusive, and sometimes humiliating. … It’s a grueling process.” Whether the sheer unpleasantness of the exam did more to deter potential traitors, or kept otherwise upstanding citizens from joining the agency, is impossible to determine.

Ultimately, there is the question of whether the polygraph ever caught Soviet spies. Certainly no major communist spy was ever caught by the machine, and the most damaging one, Aldrich Ames, passed two routine polygraph exams after he had delivered deadly information about U.S. activities in the Soviet Union to his handlers.

While the Ames case almost fatally damaged the polygraph’s reputation, the technology was rekindled in the wake of the 9/11 attacks and the subsequent wars in Afghanistan and Iraq, because, once again, it gave the appearance of a scientific way to test such elusive values as loyalty when doing the inherently risky jobs of screening employees and counterintelligence work. As the history of the polygraph makes clear, American policy makers place great trust in technological fixes to thorny political problems—even though they themselves question those fixes privately.