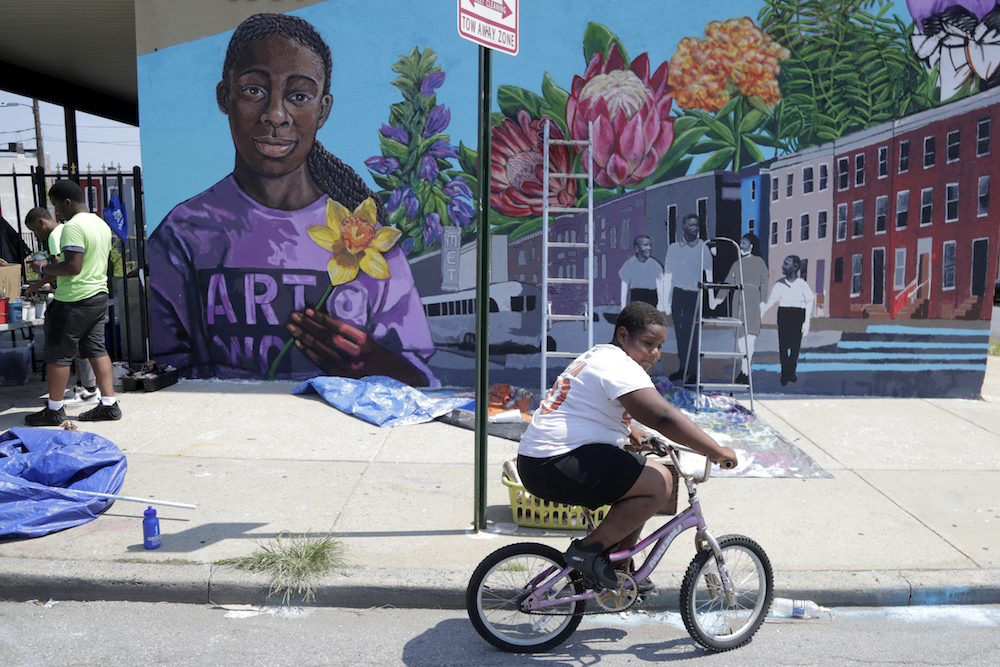 A boy rides his bicycle on July 29, 2019 after volunteering to paint a mural outside the New Song Community Church in the Sandtown neighborhood of Baltimore. Courtesy of Julio Cortez/Associated Press.

West Baltimore has been an Empowerment Zone. It is currently an Opportunity Zone. It was home to HOPE VI—a program since succeeded by Choice Neighborhoods—and it contains a Promise Neighborhood.

Given the state of segregation and inequality in our nation’s metropolitan regions, why don’t we have labels for America’s wealthier neighborhoods—neighborhoods where many policymakers surely live? Imagine “White Public School Zone,” or “Wealth Zone,” or “No Low-Income Housing Zone.”

Not likely. When it comes to deconcentrating poverty or eliminating residential segregation, we are loath to name the problem or otherwise disturb prosperous white communities. However, a national movement to undermine poverty and segregation has played out under the radar for three decades in Baltimore, and it reckons profoundly with the obligations of white people in a region that was segregated for their benefit. Rather than demand hopeful solutions from federal policymakers, these people demand something discomfiting of themselves: unflinching neighborly love.

Over the years, Baltimore, and the country at large, have focused on two approaches to concentrated poverty and segregation: place-based development and housing mobility. The former tries to bring opportunity to where poor people live. The latter takes poor people to where the opportunity already is—often the suburbs.

Empowerment Zones, Opportunity Neighborhoods, the HOPE VI program, Choice Neighborhoods, and Promise Neighborhoods are all examples of place-based development: targeting resources at locations that are economically deprived—and, by the numbers, disproportionately nonwhite. To the tune of over $10 billion over the past 25 years, the five programs listed above have enticed employers and investors to economically distressed neighborhoods with tax incentives and grants, transformed public housing through mixed-income developments and neighborhood revitalization plans, and connected public schools to “cradle-to-career” wraparound services.

In the 1990s, Baltimore Mayor Kurt Schmoke partnered with developers and community organizations in an effort to remake Sandtown—the West Baltimore neighborhood where Freddie Gray was fatally injured in police custody four years ago—into a “viable, working community” that would be “attractive to new residents.” Depending on whom you ask, the so-called Neighborhood Transformation Initiative received anywhere from $60 million to $130 million in private and public funding over a decade to “change all of a neighborhood’s broken systems simultaneously: housing, education, employment, health care, human services, public safety, and commercial real estate.” The programs changed the lives of some residents, but any illusion of systemic change was shattered when the unrest after Freddie Gray’s funeral made the international broadcast news.

Place-based development makes sense when you consider the growing body of social science research on the lasting damage that results from a childhood in poor neighborhoods—neighborhoods where, according to sociologist Patrick Sharkey, “American inequality is generated, maintained, and reinforced.”

The other approach that policymakers are taking to desegregate and deconcentrate poverty in metropolitan areas is housing mobility. That means moving people, often using federal housing vouchers, from poor city neighborhoods to mostly suburban communities where crime is already low and schools are already high-performing.

Housing mobility programs emerged as remedies in several landmark civil rights cases in which HUD and local housing authorities were sued for concentrating public and subsidized housing in black and Latino neighborhoods. Other regions have pursued housing mobility voluntarily.

Both strategies have their merit, but the disruptions inherent to both of them are felt primarily in poor communities of color. Place-based development can transform the built environment, disrupt social institutions like schools, and potentially open the door to gentrification and displacement. Housing mobility means leaving behind family, church, schools, daycare (and probably public transportation) to start life over in an unfamiliar and potentially hostile place. Many mobility programs offer counseling to ease this transition, and recent studies demonstrate the health and economic benefits for families who make the move.

Of the two approaches, only housing mobility demands anything concrete of white communities. And it shouldn’t be a huge ask to expect prosperous white people to accept poor and nonwhite people into their neighborhoods. After all, as the authors of the Kerner Commission wrote in 1968, “white society is deeply implicated in the ghetto. White institutions created it, white institutions maintain it, and white society condones it.” From segregation ordinances, redlining, and “slum clearance,” to restrictive covenants, segregated public housing, blockbusting, and steering, white communities have institutionalized their prejudices through business practices and public policy, ensuring that wealth follows whiteness and that blackness is penalized.

But when policymakers propose bringing low-income housing to white communities—or black and Latino students to their schools through busing or school district rezoning—backlash ensues. Over the past three decades in the Baltimore region, white resistance has met nearly every effort by fair housing advocates to help poor black public housing residents move to prosperous suburbs, or what housing wonks call “communities of opportunity.”

Some mobility opponents decry the crime, filth, and moral lassitude they say will surely follow the new residents and drive down property values. Others afford themselves plausible deniability for charges of racism, saying that schools, roads, and social services will be overwhelmed. Whatever their intent, when they succeed in repelling mobility programs, the effect is the same: segregation and inequality.

Despite the resistance, fair housing advocates have created several thousand opportunities for mobility from Baltimore’s poor black neighborhoods to areas that include what University of Minnesota political scientist Edward Goetz and two colleagues call, in a wickedly clever appropriation of HUD-speak, “Racially Concentrated Areas of Affluence.”

A settlement in one legal case took 17 years but ultimately created over 4,000 mobility vouchers. In 2016, Baltimore County settled a five-year-old complaint about systemic discrimination, agreeing to help develop 1,000 affordable housing units and create 2,000 mobility vouchers in “communities of opportunity.” Maryland settled a six-year-old complaint in 2017, entering a voluntary compliance agreement that required the state’s housing agency to help finance 1,500 housing units in such areas. Just a year later, the state awarded Low-Income Housing Tax Credits for over 800 units in mostly white suburbs.

But such measures are inadequate to the task envisioned by the architects of the Fair Housing Act: “truly integrated and balanced living patterns.” In Baltimore, 12,000 people remain on a list for housing mobility vouchers, and 20,000 crowd a list for regular Housing Choice Vouchers. High levels of segregation remain in many metropolitan regions; one-third of black metropolitan residents in the U.S. live in a “hypersegregated” area.

What is the obligation of white people in a highly segregated and unequal region? It’s a fair question. White policymakers created the lines of segregation around West Baltimore, and segregation pays dividends to white Americans in the wealth their homes generate, how they are policed, the resources in their public schools, and many other ways.

One way to undo those policies is to connect white suburbanites with people in West Baltimore. That doesn’t mean white people should reflexively move into black neighborhoods en masse. When that happens, whether incentivized by well-meaning policy or not, gentrification and displacement can result.

But thoughtful, smaller scale “reverse mobility” has led to a different kind of investment: real relationships. In Baltimore, about a dozen middle-class households—some black, mostly white—have deliberately taken up residence in Sandtown as part of a Christian movement that some call “gentrification with justice.”

The Christian Community Development Association endorses the “Three Rs” model espoused by Dr. John M. Perkins, a 90-year-old civil rights movement veteran from Mississippi. The first and most noticeable “R” is relocation: Perkins, who is African-American, insisted that outsiders who want to help a neighborhood must move in, lest they misinterpret the “felt needs” of residents. The second “R,” redistribution, means using your wealth, education, and connections to empower your new neighbors. The third “R,” reconciliation, requires hard work across thorny lines of race and class.

“After you have relocated and before you start any programs, listen,” Perkins once wrote.

Rebekah Roach, a white woman, moved to Sandtown right out of college with three other young women in 2009 and began worshipping at the multiracial New Song Community Church, which was at the time a member of the Christian Community Development Association. “We all had the same vision of living here intentionally, to get to know our neighbors, to learn from our neighbors,” she says. Roach is very conscious of appearing as a gentrifier or a missionary. “I don’t believe in the white savior thing,” she says.

Over the past three decades in the Baltimore region, white resistance has met nearly every effort by fair housing advocates to help poor black public housing residents move to prosperous suburbs, or what housing wonks call “communities of opportunity.”

At its peak in the mid-2000s, New Song Urban Ministries attracted millions of dollars in investment, and its Habitat for Humanity outpost rehabbed over 300 houses—a testament to John Perkins’s insistence on redistribution. The efforts likely paled in comparison with the resources placed by governments in Empowerment Zones, but Empowerment Zones did not include the work of reconciliation that took place every day inside and outside of New Song Community Church’s walls. Church leadership insisted that “remainers,” as some CCDA devotees call longtime Sandtown residents, be present in leadership of any programs created by relocators. And, across the neighborhood, relocators and remainers tried to bridge racial divides with empathy, sacrifice, and all the other elements of neighborly love.

In 2013, Roach bought a house two doors down from one of Sandtown’s most notorious corners. Three years later, she married, as she puts it, “a country boy who God called to live in the city.” Mike, who is black, loves to sit on the stoop and build relationships with the young men who hang out on their corner. Their church has moved away from the CCDA model over the past few years, and attendance has dwindled to a small but devoted core. However, Rebekah and Mike remain in Sandtown. They welcomed their first child last summer.

None of this necessarily compels white people to move away from affluence. (And not all African-Americans embrace Perkins’s affinity for people relocating to their neighborhoods.) But white people must recognize the way white supremacy—which Baltimore-based activist and think-tank researcher Dayvon Love defines as “the social, political and economic domination of people of color by white people”—works in their own region. Prosperous white people must recognize poor and minority residents as neighbors even if they live in a part of their region that looks very different than their own. And it is essential to heed John Perkins’s imperative: listen.

“Poor people aren’t stupid,” said former Baltimore housing commissioner Daniel Henson as he testified about place-based development in Sandtown during a 2003 trial over segregation in public housing. “I mean, poor people just don’t get asked a lot. If you open them up and begin to ask people what they want their community to be like, they will tell you.”

Once they tell you, you cannot unhear them. You can only ignore them.

That’s easy to do when they have their place in a region and people with means have theirs. But if communities like West Baltimore are truly going to find empowerment, or opportunity, or promise, or choice, or hope, those of us with social, political, and economic power must truly listen to their residents.