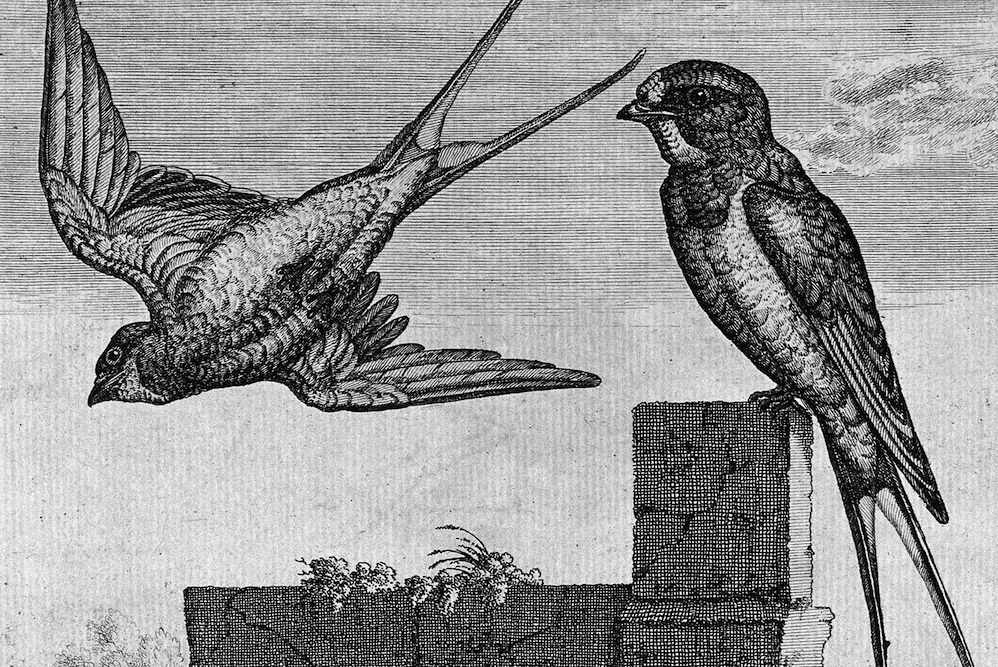 Engraving of two swallows or house martins by F. Place, after F. Barlow, around 1690. Courtesy of Wellcome Collection.

I’ve only seen them build nests on underpasses, on buildings, in the shadows of London Bridge—relocated from Britain to sandbar sex party shit show Lake Havasu, both names reminders of more dignified pasts—or flocking around the Mission at San Juan Capistrano, a landmark to a horrific one. But always re-homing the brick and mortar we’ve built over theirs. Making it their anchor. The swallows try to make their mud huts on the side of my father-in-law’s house, and he hoses those homes back into the soil before they nest. Too destructive, he says. He’s not wrong, exactly, but rich coming from him, me, any of us, you (unless you’re a bee who’s learned to read). But today, in the rain-ripened grasslands, in late day shadow under black clouds, the swallows arc silently over untouched earth. They fill the air, flitting, maybe bug-filled. Without a four-walled box in sight I ask, Where is your home? They have no good answer but the best one—more flight, open sky—and I am unmoored, aloft, above every good thing we have lost. Anything is possible. Death could look me in the eye and die from joy. Life could take me by the hand, teach me the better of two lies.