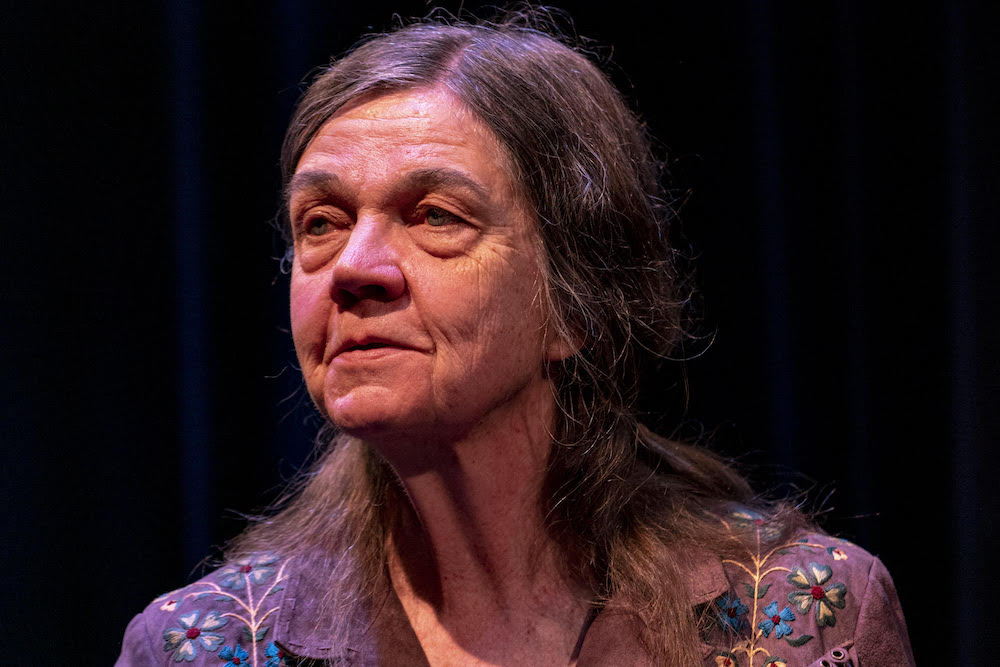 Patricia Limerick is a professor of history and environmental studies at the University of Colorado Boulder, where she also serves as faculty director and chair of the board of the Center of the American West. She is the author of Desert Passages, The Legacy of Conquest, Something in the Soil, and A Ditch in Time. Before taking part in a Smithsonian/ASU “What It Means to Be American” panel discussion, titled “How Did the American Conquest of the Southwest Shape New Mexico’s Future?,” which took place at the Taos Center of the Arts in Taos, New Mexico, she spoke in the green room about artichokes, growing up in Banning, California, and her favorite place to eat in Boulder, Colorado.

There are a lot of good candidates. I think I was a young person who was almost wearing a sign saying, "If you would like to change my life, if you are a teacher, I would be responsive to that." So I think I would go with Jasper Rose, who was my Western Civilization teacher at University of California, Santa Cruz. He was very eccentric, and he always wore an academic robe to class, and he usually smoked a cigarette, which, he probably can't do any longer. He would put the cigarette in his mouth and light it, and he would not remove it. I would not be able to do that. The ashes would kind of cascade down his robe. And he totally loved young people, and he found us hilarious, and he called us “ducky.”

So once I went to him, and I said, “Mr. Rose, I am just not prepared for college, I'm only a freshman here and Western Civ. is very confusing for me, there's so much.” And he said, “Well, ducky, what you need here is a textbook. These are very, very dreary. You will not want this, but I want you to just carry it around for a little bit, you'll read it, and then you'll say, ‘I don't want this textbook,’ and we'll move on from there.” He was a wonderful person. He made me believe that you could be an academic and be very eccentric, and that would be fine and tolerated. He also just made us write all the time and read all the time, and part of my life has been going back and finishing the books that he assigned to us that I didn't read. He also said to me once—I was out talking to him because we had been talking about the Reformation and the Protestant conviction that man is inherently sinful—and so I was talking to Mr. Rose and I said, “Mr. Rose, it just seemed weird to me when you were talking about that, I just thought you might actually believe that humans are essentially sinful and have darkness in their souls. You don't believe that, Mr. Rose?” Remember, I'm 17 or 18. And he said, "Just wait, ducky. Just wait."

One book that I just loved, and I hope everyone will read, is The Long Haul. And it's by a person who's now my friend, Finn Murphy. He is really smart and a really good writer, and he left college at the end of his third year many years ago. He's sixty now.

What is the biggest misconception Americans have about New Mexico?

Well, I do own that funny little book that someone published of letters that people have written thinking that New Mexico was another country and asking what kinds of visa they will need to come visit.

I think the quaintness, that this is a very quaint place where three romantically mixed cultures have gotten on very pleasantly for centuries—the Anglos, Mexicans, and Indians. A lot of advertising money went into promoting the romantic three cultures thing. But New Mexico is dramatically more interesting than that soft-focus lens picture of people dressed in colorful clothes, dancing, or at least tapping their toes together.

How do you think the place you grew up, Banning, California, shaped your vision of the West?

Growing up in Banning was incredibly lucky. Of course, as a child, I had to think, "Oh, this is so sad that I have to live in such a boring place." But then, when I went to college, I realized that I had had such an incredible opportunity to watch people, kind of like time-lapse photography or something. People who'd grown up in much more interesting places, theoretically—San Francisco—they just had nothing in the way of the same opportunities to watch human beings.

As a Western-American historian, I finally came to realize that Banning had all the key groups. There was an Indian reservation on the edge of town, and there was a significant population of Mexican and African-American people who worked in Palm Springs, which was 15 or 20 miles away. Our town fathers probably would have segregated us if they had had the money, but they didn't, so from fifth grade on, we were all in the same school system. We were so fortunate to not be permitted to be strangers to each other.

What’s your favorite place to eat in Boulder?

Well, that's easy, because I go there every other day. There's an Salvadoran fellow, Ado. He opened a restaurant that he originally called Span-ish. It's two blocks from my office and six blocks from my house. The food is really good. For a while, not that many people went to it. I was in terror that it was going to close, but it seems to be doing fine.

The best things are the Mongolian combo, the Salvadoran shrimp, the chicken piccata, and the Caesar salad. I think Ado believes, rightly, that I am the most ardent and energetic promoter of his restaurant.

I hope you can join me sometime. I mean, you would just be sad if you didn't. We'll just say that.

What do you find most interesting about the desert?

Banning is on the edge of the desert, and I was never particularly happy about that. Mostly, I thought, “Oh, boy, the wind blowing off the desert.” It sits where the air pressure equalizes between the interior desert and the coast, so the wind is blowing, all the time, off the desert. I've always had long hair, and I spent most of my childhood untangling my hair because the wind blew off the desert.

I had looked at picture books and read children's books that made it clear that a really nice-looking place has trees and green things. We had mountains on either side, so I could recognize that the mountains were pretty, but I just thought, “Oh, this desert.” I don't think I had anything that approached a positive feeling about the desert.

Then decades passed, and I went back. I went for a hike in the desert, just maybe six miles, seven miles out of our town. And I just thought, “This is beautiful. This is totally beautiful, and how did I miss that as a kid?”

My favorite plant might be the artichoke, because at different phases of my life I have thought addictively and highly of artichokes. So maybe the artichoke plant. But you can't just go around eating plants, and so I would say I just feel very fortunate to live in a place where in five blocks, I can be in open space, and there's a forest. I think that's why I'm stumbling a little bit here. I don't want to have to single out a particular tree.

I thought for many years I did not like bell pepper plants, but then it turns out I just eat them addictively. Bell peppers—not the whole thing, but the peppers. And so that's an interesting problem. I've not really thought that much about my affection for plants, but now I will, frequently. People get called "tree huggers." Maybe I can be a "bell pepper plant hugger."

Who’s one person, living or dead, you’d most like to meet?

I've been so fortunate in meeting the people I wanted to meet. Let's work a little bit harder: living or dead? Okay, so dead. That narrows the pool. This seems so predictable and obvious, but Mark Twain, or Samuel Clemens. If I was fooled by his being so funny, I got over that. I realized how much he was steeped in sorrow and tragedy, and that the humor keeps bursting out of the sorrow, and then the sorrow returns. [I’d like to meet him] not so that I could laugh at his great humor, but so we could weep together. At his house in Hartford, Connecticut, he would apparently just be up in the middle of the night, playing billiards in a haunted, intense way. I would like that. I don't totally like being around cigar smoke, but I could do it for this. But to be in that place. I think it's the second or third floor of the house in Hartford where he was playing billiards. I would be invisible and he would just be muttering to himself, or I could read his thoughts. That'd be good, I could do that. I guess if we're going through this whole fantasy, if I could be there at all, I guess I might as well be reading his mind.

To my house—to the basement and the exercise room, where we have an elliptical machine—and to the airport. I really am not particularly interested in retreating, but I do like my own company. And for a long time, I had a very peculiar habit of going to coffee shops or restaurants and writing and being by myself at a table, really enjoying the fact that it was just me and what I was writing.

“What is this thing that you have about the passive voice verb?” Well, it's easy to answer because if you use active verbs, your writing just comes along. I say to the student, “Okay, good, tell me a story in the passive voice verb. Did you go skiing recently? Tell me about it. ‘The slope was approached...’”

I mean, friends, you can't do so. So I think there is a lot of legitimate interest in why I am so obsessed about getting them to stop using the passive voice verb.