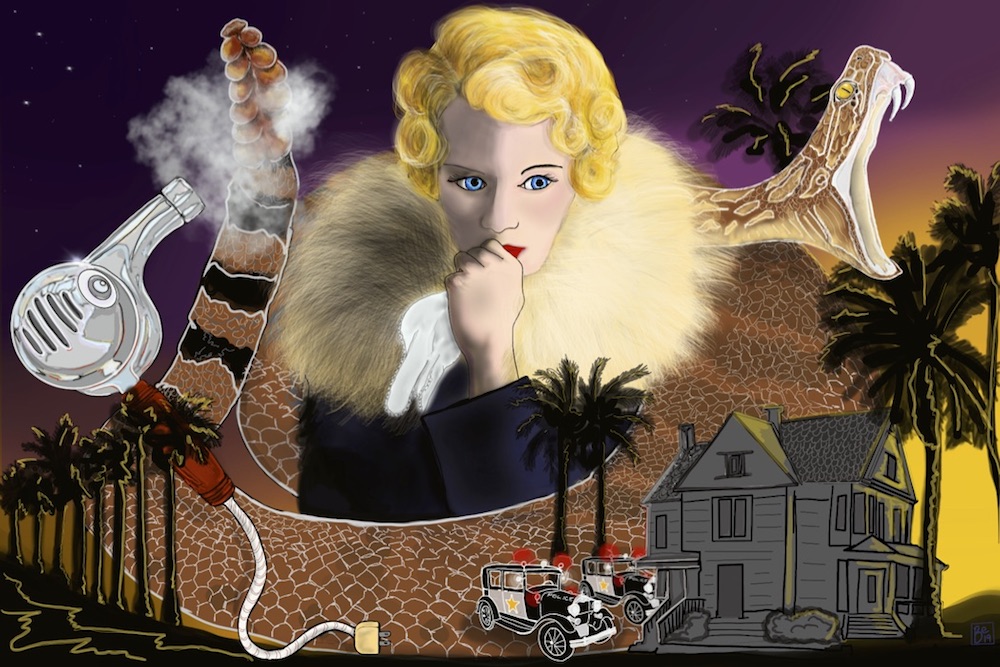 What is the root of our cultural fascination with women—often wives or girlfriends—who accompany men as they commit a violent or notorious crime? In recent years, the husband-and-wife San Bernardino terrorists, along with the wives of the Boston Marathon bomber and the Orlando nightclub shooter, have drawn round-the-clock coverage of the question: Why did she go along with it?

One historical clue to the origins of this American obsession can be found in 1933, when the office of Los Angeles District Attorney Buron Fitts began prosecuting the case of Burmah Adams White.

Burmah was a 19-year-old hairdresser and Santa Ana High School student when she married an alleged gangster, Tom White. They spent their honeymoon on a crime spree, using their guns to rob at least 20 people in L.A. over an eight-week period. Her platinum blonde hair would inspire the nickname, “The Blonde Rattlesnake.”

The worst of her crimes was her assistance to White in the shooting of a popular elementary school teacher, Cora Withington, and a former publisher, Crombie Allen, who was teaching Withington how to drive his new car. Withington and Allen were stopped at a light when a car, driven by platinum blonde Burmah, pulled up alongside them; Tom jumped out of the vehicle brandishing a pistol. He pointed the weapon at Withington’s head and allegedly said, “Shell out, sweetheart!” As Withington and Allen were handing over their valuables, Tom got impatient and shot the teacher in the head. The bullet tore through Miss Withington’s left eye and came out near the right one, passing through the other side of her head and ripping a hole in Allen’s neck.

Despite his injury, Allen memorized the license plate number of the bandit’s car. Both victims survived their wounds, but Withington was permanently blinded in both eyes.

A few days later, a watchful pair of patrolmen near the Casa del Monte apartments in the Westlake neighborhood called their detective colleagues at the Los Angeles Police Department; they had spotted a car that looked like one the duo had stolen days before. Two of these detectives dressed as mechanics and kept an eye on the apartment building until Burmah and Thomas appeared one afternoon. As police swarmed the building, Burmah tried to hurl herself out of a third-story window, while Tom shot at officers and was immediately killed.

The end of the crime spree didn’t end the obsession with Burmah’s case. It fueled it. No one asked why Tom White perpetrated the crimes, or asked his sister any questions about his past. But for months after the shootings and Burmah’s arrest, newspapers and radio stations tried to make sense of a young woman from a “good home” who would go along with such a villain.

And they provided various answers. Former schoolteachers insisted the blonde beauty was a brilliant student until the age of fourteen, when she was hit by a truck and sustained a head injury with lingering side effects. Detectives at the scene of her husband’s death reported that Burmah was under the influence of “dope,” and witnesses reported that she had done a lot of cocaine during her postmarital crime binge.

Whether or not Burmah was under the influence of abuse, drugs, or sociopathic tendencies during that long, hot summer is beside the point: She was soon a distant memory, overshadowed by the exploits of Bonnie Parker and Clyde Barrow and the ongoing crimes of any number of “big-time” criminals.

But in 1933 and 1934, White’s life story blazed fiercely across national media. It was even featured in the first full-length episode of the radio serial Calling All Cars, and in one of the early versions of True Story: The Court of Human Relations, then on NBC’s radio network. Newspapers printed a number of large photos of her because she was beautiful—petite, with huge blue eyes and a Clara Bow mouth that she accentuated with artfully applied red lipstick.

What sold newspapers was not just her looks but also the mystery around her motives, and all the ways reporters could exploit that mystery. She had no outward reason to commit crime, so she was described as an impertinent thrill-seeker—“the most dangerous type” of criminal, according to a Los Angeles Times article in which she was featured along with John Dillinger’s girlfriend Evelyn Frechette and Bonnie Parker.

And the public’s horrified interest in such female criminals made the chance to prosecute her a godsend for Buron Fitts, the district attorney.

A native of Texas and a decorated World War I hero, Fitts longed to be governor of California. He was the head of his adopted state’s American Legion, and was lieutenant governor from 1927-1928, but grew bored with this largely ceremonial job. The following year, he decided to return to Los Angeles and mount a campaign for district attorney, a job that he hoped would give him a larger public stage. He used the media to promote his candidacy.

“If elected, I will use the powers of the office for law abiding men, women and children and as a most unhealthy place for criminals,” he told the Los Angeles Times in a May 1928 interview. But his giant effort to “cleanse” Los Angeles of its gang element failed when an appeals court invalidated the imprisonment of several men thought to be importing criminal enterprise from the Midwest and East Coast.

Burmah’s prosecution gave Fitts another chance to define himself as a guardian of the public morals and of civic life. Fitts appointed his toughest deputy, George “The Hangman” Stahlman to prosecute White. Fitts, Stahlman, and LAPD chief James “Two-Gun” Davis said they would make an example out of Burmah, extracting the debt to society that her dead husband (who wielded the gun in all instances) could not pay.

And they did. Judge Fletcher Bowron sentenced White to a 30-year prison term. “The number of young people who commit serious crimes is appalling,” Bowron told the courtroom when Burmah was sentenced on November 7, 1933. “It is now an exception to have before the court a person of mature years charged with robbery, burglary, and automobile theft. These and similar crimes are committed, for the most part, by mere youths. And of recent years girls and young women are swelling the ranks.”

Crime statistics from the 1930s are difficult to extract, but whatever the case, Burmah White fit no particular category of perpetrator, despite the judge’s claims. She was young, but not too young to marry and live away from her parents. She may have appeared to the public to be living a lifestyle of furs and late nights and fast cars—but the reality was, she had often worked two jobs at a time to help support her parents and younger sister, who suffered from debilitating ear infections and needed costly medical treatments.

One reporter noted that once she was arrested, “strongarm methods” that might have succeeded on “an underworld type of girl” didn’t wring any admissions from her. Gradually, it dawned on the officials that she was no “bandit’s ‘moll’,” but rather, “a normal girl, a baker’s daughter, who had fallen in with a desperate criminal.”

But Burmah’s real guilt didn’t matter. The LAPD and the mayoral administration unilaterally decided that she must be made an example of what could happen to young girls who thought they “knew the world” and weren’t careful.

Burmah’s ordeal may or may not have dissuaded young women from falling in with the wrong man or the wrong crowd. But it definitely put Los Angeles in the national spotlight as news of Burmah’s conviction and punishment ran on the front page of thousands of newspapers nationwide.

The true beneficiaries of Burmah’s punishment soon became clear. Fitts, Chief Davis, Mayor Frank Shaw, the President of the Police Commission, and other city executives held a ceremony for the police officers involved in her capture. The officers were given certificates and promotions; the city received funding for its first felon registration program; and the L.A. County Sheriff’s Department got money to put radios in all of its cars. Judge Bowron used Burmah’s case as an opening salvo against the California State Board of Parole, arguing that the trial judge in each case should fix minimum sentences. These two crusades made him a household name and in 1938 Bowron was elected mayor of Los Angeles.

But Burmah’s real guilt didn’t matter. The LAPD and the mayoral administration unilaterally decided that she must be made an example of what could happen to young girls who thought they “knew the world” and weren’t careful.

Fitts would go on to prosecute another “outlaw woman” in 1934—Nellie May Madison—who was accused of murdering her husband. But after that, his career slowed. The district attorney was indicted by a Los Angeles grand jury (headed by Bowron) for perjury in connection with another case. The case went to trial, and he was acquitted two years later. He would win election to a third term as district attorney in 1936, but his dreams of high, statewide office were over.

Burmah White was sent to a prison in Tehachapi, California, north of Los Angeles, where she styled the hair of fellow inmates who included serial killer Louise Peete, child murderer Erna Janoschek, and “Tiger Woman” Clara Phillips, who beat her husband’s mistress to death with a claw hammer. After eight years, Burmah White was set free into obscurity.