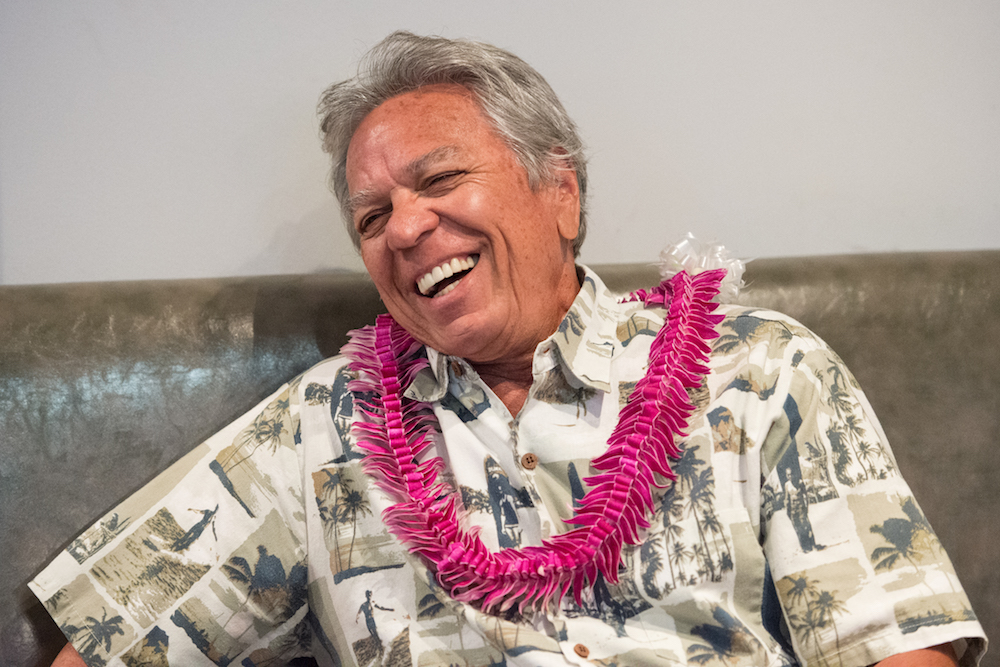 Andy Bumatai is an American comedian and actor. He has performed stand-up comedy extensively on the mainland and in Hawai‘i, and has appeared in the films, The Whoopee Boys, A Man Called Sarge, and Aloha Summer. He was featured on Raven and has had roles on North Shore and Baywatch, among others. He is currently executive producer of Nighttime Productions and produces and stars in his own Hawai‘i-based online talk show, The Andy Bumatai Show. Before taking part in a Zócalo/Daniel K. Inouye Institute “Talk Story” event titled “Will Pidgin Survive the 21st Century?,” which took place at Artistry Honolulu in Honolulu, Hawai‘i, Bumatai spoke in the green room about the differences between humor in Hawai‘i and on the mainland, the power of YouTube, and his admiration for the humble cockroach.

Well, I’m a fan of Gladwell, you know, Malcolm Gladwell, and the Goliath one kinda hit me just right. I also liked Kamala Harris’ book, just finished that. Kind of a resume, but it gave me insight, too, especially [into] her prosecutorial days.

Do you think humor in Hawai‘i is different than it is on the mainland?

Oh, definitely. What we call “local humor” is, and has been categorized as, “ethnic.” To me, the difference is ethnic humor centers on the differences people have and it’s, “Hey, look, they're different than us, ha ha.” Whereas local humor is inclusive. In other words, “Hey, look, we’re all different, but we’re all in this together.” And the acid test is, if you did a joke on the mainland about an ethnicity, you most likely would not tell that joke if the room was full of that ethnicity. In Hawai‘i, the more Japanese, the more you tell Japanese jokes, because local humor has insight into the culture that it’s skewering.

What do you think is the biggest misconception people have about Hawai‘i?

I’m hedging, because on what level? I mean, I’ve traveled the country, and actually had people ask if we lived in grass huts. To this day, you know, you get questions like, “If you dive in on one side of the island, can you swim all the way under it and come out?” I mean, things like that. I’ve had a motorcycle in California with Hawai‘i license plates and people have actually asked, “How did you get it here?” Now, there’s that, and then a more intellectual misconception, is that we’re often literally in the middle of nowhere and inaccessible. Now, we probably are the most isolated landmass, but say for instance, you try to buy something on eBay and they say, “We’ll send to Istanbul, but not to Alaska or Hawai‘i.” And they’re in San Diego, but they’ll send to New York. But I think that we’re inaccessible—that would be a misconception.

Where do you take out-of-town guests when they come to Hawai‘i?

I don’t normally do that. I really don’t. And I tell people, “I’m the worst tour guide ever.” So, my wife will take family and go to the beach, and my daughter goes surfing and stuff, but I don’t do that much.

What was the last thing that inspired you?

I would have to say the YouTube explosion. The young people and, I guess, people of all ages who are doing things on YouTube and giving television a run for its money. I’m on YouTube, but I came in late, and I watch Casey Neistat, you know, the obvious one. But when you look at what he’s done, it was especially inspiring to see Casey at a television awards function, and they treated him like a fly, much the same as—I’m trying to think of the company that used to rent the videos, you know, you’d go down and rent a video—Blockbuster. Blockbuster treated Netflix the same way, right? And look what happened. Casey Neistat’s there, they’re treating him like the redheaded stepchild and honoring shows that were getting 10 million views a week. Casey Neistat was getting 2 million to 3 million views a day. His different approach was very inspiring, especially when he spoke at functions and he would tell new people, “If you want to be successful, the first thing you need to do is go get a job you hate. Wash dishes, because then when you’re doing your passion, you really appreciate it.” Now, I did all that stuff by accident, so I went, “Oh hey, I’m halfway there even though I’m starting late.” So, him and a number of other YouTube-type stars.

Who’s one person, living or dead, you’d most like to have a drink with?

I don’t drink, so, let’s see. To hang out with? I don't really have heroes that way. My heroes are people that deliver the mail, the operators of the phones, the gal at the bank, you know? People who do stuff every day, thanklessly, and like eggs, you only hear about the bad ones. So I would say Gloria at Territorial Savings in Mililani.

What was the most memorable thing about being on Baywatch?

Meeting Scott Rogers, the acting coach. He’s the national SAG representative, and he was an acting coach here for years. Meeting him, and then for him to go on and really help me with some basic acting. And it’s interesting, the kind of stuff he taught me, and that was like martial arts, you know? When you’re teaching somebody to punch, you’re mostly telling them to stop doing certain things. This is a bad analogy, but when someone goes to open a door, they don’t reach for the knob like this. When you do it, you just go like this. When you punch somebody, you just go like this. You don’t go like this, you see what I’m saying? But most people do that because they’ve been watching too many John Wayne movies. But in acting, there’s a lot of that. James Caan or somebody said, “Acting is fine, just don’t get caught at it.” Acting’s very difficult.

If you could be any animal, which would you want to be?

Do insects count as animals? I’d probably be a roach. I just admire their tenacity. You put two roaches together in a jar, and a roach can last two weeks without eating. You put two roaches in, and one of them will last a month. I mean I’ve said it a million times, it’s an analogy of mine. People hate roaches. When you think about it, they’re just trying to get by with the best that they’ve been given, which is like most of us. I felt the same way when I had cancer. I said, you know, everybody’s like, “F^*k cancer!,” and they'd give me shirts that say that, and I said, “I would never wear that shirt.” Cancer’s just trying to survive. It doesn’t know that it’s—it’s like termites, you know? They’re eating your house, they’re just trying to survive.

Where would we find you at 9 p.m. on a typical Friday night?

At home, editing. I shoot, edit, do the interviews. I have one unpaid intern who helps. Christina Burton, she helps me a little. Unless we’re in reruns, and then I’m thinking about other shows. My wife and I joke, we go to bed now at the same time that we used to go out.

Do you have a favorite Hawaiian pidgin phrase?

“If can, can, if no can, no can.” It’s to the point where I now just go, “If can, can kine.” I don’t even finish it because so many people know of it. It’s interesting, I want to say Marco—he’s the general manager at the Blue Note, and he's from New York—he has embraced that. He came, and he says, “You know that saying, ‘If can, can, if no can, no can’? Do you know how useful that is? It says it all so perfectly.”

I don’t know if you heard this story, but I was doing a show with Dana Carvey, and in my act, I was going, “Not!” You know how Hawaiians do that. “Oh, I’ll surf a 90-foot wave.” [And then someone says], “Not!” You know? And after the show, he asked during intermission before he goes on, he says to me, “What’s that thing you’re saying, ‘Not?’” And I said, “Well, you know, if you don’t believe something somebody says, you say, ‘Not!’” He took that to “Saturday Night Live,” but he used it differently. In pidgin, it’s, “I don't believe you.” But he used it like, “Psych!” Like, “Hey, I'll give you a million dollars. Not!” But it really caught on. You know, there are a number of things like that that rappers picked up, different phrases, some of them scatological, but still, it’s a proof of concept.