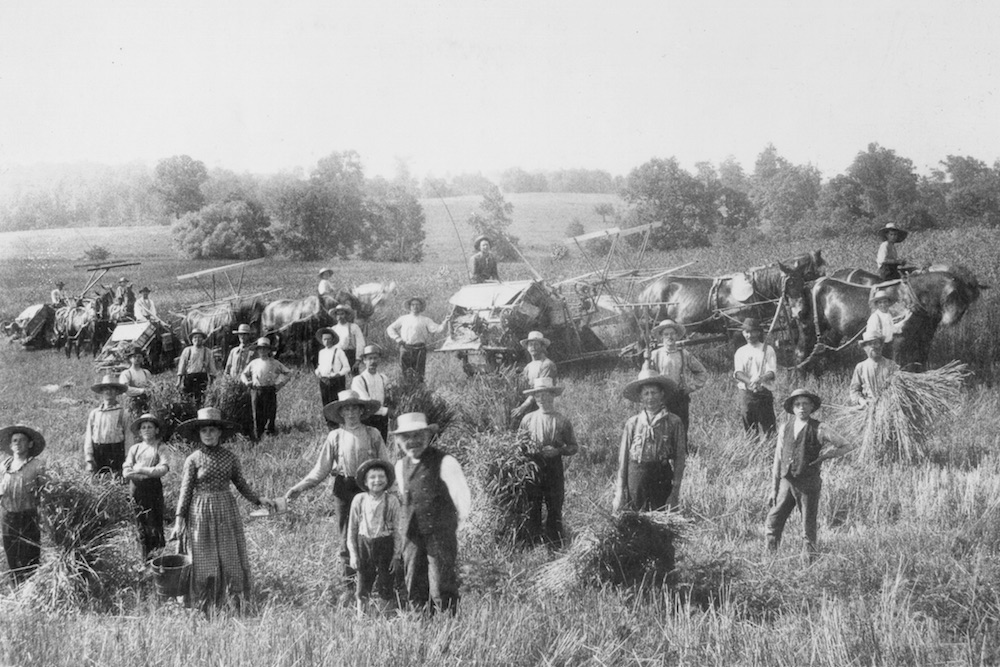 In this communal society, men and women worked side by side, even harvesting crops. Courtesy of the Ohio History Connection, Columbus, Ohio.

Quaint, rural, and hardworking, Zoar, Ohio, is the kind of place that wasn’t supposed to thrive in America.

The citizens of Zoar came to this country as religious dissenters in the early 19th century. In unorthodox fashion, they formed a communal society where all wealth was combined: men and women alike pooled their labor, their wealth, and their belongings for the benefit of the whole.

The community thrived. In a nation dedicated to individualism, Zoar’s citizens built a first-of-its-kind economic system and persevered for three generations, becoming one of the longest-lasting communal societies in U.S. history. That Zoar was allowed to succeed, and was even admired for its efforts, serves as a reminder that America has often celebrated differences that fly in the face of mainstream beliefs.

Many immigrants to early 19th-century America had come to acquire property and better their economic future. But the Zoar dissenters—like the earlier Puritans who fled 17th-century England—came here to worship their God in their own way, and not have to conform to the strict rules of the state-run Lutheran Church.

These believers came from the German kingdom of Württemberg, and were known as Radical Pietists because they thought the established Lutheran church’s rules were too stringent and dogmatic. They desired a simple faith, one harking back to the early Christian Church, and personal relationships with God without the interference of ministers and church hierarchy.

Starting around 1800, the Separatists, as they were also called, had met clandestinely, with itinerant preachers going from village to village. Because the state and the church of Württemberg were so intertwined, they were met with persecution. They were fined, beaten, and jailed. Authorities quartered soldiers in Separatists’ homes, and placed their children in orphanages.

In April 1817, a small band of about 300 farmers, artisans, women, and children decided the only way to fulfill their spiritual desires was to emigrate to America, where, it was said, there was freedom of religion without government interference. When their ship reached Philadelphia, they were greeted by sympathetic Quakers, who provided food and care. The Separatists purchased 5,500 acres in the Tuscarawas Valley of east-central Ohio, where many German-speaking immigrants had already settled. The Delaware Indians had previously cleared the banks of the Tuscarawas River, which allowed the Separatists to plant crops the next spring.

The Separatists built log cabins on their land, founding a community they called Zoar, after the biblical Lot’s town of refuge. But they struggled to survive through harsh winters and the heavy labor of creating a new settlement in the wilderness.

With food scarce, families became increasingly desperate—and decided to form a communal society in April 1819. All members of the Society of Separatists of Zoar, as they were called, gathered their wealth together. In return, the Society provided each member with all the necessities of life: food, clothing, and shelter. They would be stronger together than individually.

In 1822, Zoar’s citizens went a step further and became celibate, so that women could work instead of being sidelined when they gave birth and raised children. The ultimate aim of all of this sacrifice was keeping their church together; that was why they had left Württemberg in the first place.

That Zoar was allowed to succeed, and was even admired for its efforts, serves as a reminder that America has often celebrated differences that fly in the face of mainstream beliefs.

It didn’t take long for Zoar’s fortunes to turn. The town was on the route of the planned Ohio & Erie Canal, an artificial waterway being built by the state of Ohio. In 1825, Zoar signed a contract for $21,000 to hand-dig seven miles of the canal through their lands. The cash allowed the Separatists to pay off the note on their land, and to end their self-imposed period of celibacy, in 1829.

Just as crucially, the new canal allowed Zoar to ship produce north to Cleveland and beyond, ushering in an era of prosperity. During the 1830s, the Zoar Society farmed wheat, rye, and oats, and raised horses, cattle, and sheep. The group built gristmills, sawmills, a woolen mill, two iron furnaces, a store, and a greenhouse and geometric central garden. Their settlement had, in the words of an outside observer, become “the trading center for the region.”

Zoar’s charismatic leader, Joseph Michael Bimeler, was the architect of this prosperity—even though he lacked training in religion or in business. On Sundays, in simple worship services, his “Discourses” (never called sermons) extolled the Separatists’ belief that they should strive toward being more like Christ in word and deed. During the week, he supervised the Society’s business enterprises, keeping the accounts and funds, with the heads of all business entities reporting to him.

He also headed up the community’s unique system of government and voting. In Ohio, women couldn’t vote in municipal elections until the 1890s, but Zoar members, male and female, voted yearly for their leaders. They elected an Agent General—Bimeler—as well as three trustees, who monitored the crops, the livestock, and the industries.

Once they became adults, people in Zoar signed a membership contract that bound them to obey the orders of the trustees. They didn’t earn money for their labor, but their daily needs—home, sustenance, and work—were provided for them. Women worked alongside, and as hard as, men. According to the terms of the contract, if you left the Society, you carried away nothing in return for the labor you had contributed. 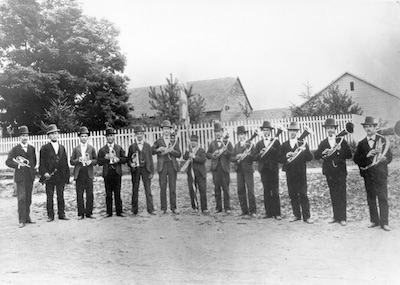 Playing music was a favorite pastime. Concerts by the Zoar Band entertained both Zoar Society members and visitors. Courtesy of the Ohio History Connection, Columbus, Ohio.

Life was not all toil. The work itself could be fun, with corn husking bees and applebutter stirrings, turning chores into community social occasions. In the evenings, a men’s chorus, an orchestra, and a band played favorite German and American tunes, German lieder and Sousa marches. Families strolled along the riverbank and through the garden.

What did Zoar’s neighbors think of this strange group in their midst, with such a peculiar lifestyle? There is no record that any of them objected. So respected was the Society’s business acumen that many locals treated the Society as a bank, depositing their savings into or borrowing small sums from its coffers, both at interest. During the Civil War, Tuscarawas County commissioners borrowed more than $10,000 from the Society to support families of the county’s Union volunteer soldiers.

From the community’s very beginnings, nearby Ohioans came to visit, marveling at Zoar’s beautiful flower garden and its neat fields “where nary a chip or stick can be seen,” as the Ohio Cultivator, a newspaper for farmers, reported in 1848. In 1833, the Separatists, never ones to miss a trick at making money, built a hotel to cater to these visitors. Tourists came by canal and horse and buggy, and eventually by railroad.

By the 1880s, America was changing—and so was Zoar. The industrial revolution made the Society’s craft industries obsolete, and tourism was bringing in the bulk of Zoar’s cash, so much so that the town enlarged the Zoar Hotel to more than twice its original size in 1892.

But Bimeler’s death in 1853 left a leadership void. Business chugged along, but no subsequent Society member had the charismatic Bimeler’s gift for preaching. Many of Zoar’s young people were reluctant to submit to the sacrifices that communal life entailed, and left for jobs in the outside world.

Finally, in 1898, descendants of Zoar’s founders decided to abandon the Society. A team of surveyors divided the property, and Zoar became just another small Ohio town. Today, tourists still visit its restored and reconstructed gardens and homes, rediscovered in the 1920s by local historians who began to appreciate Zoar’s experiment in communalism. Zoar’s unusual communal lifestyle made it an American capitalist success.