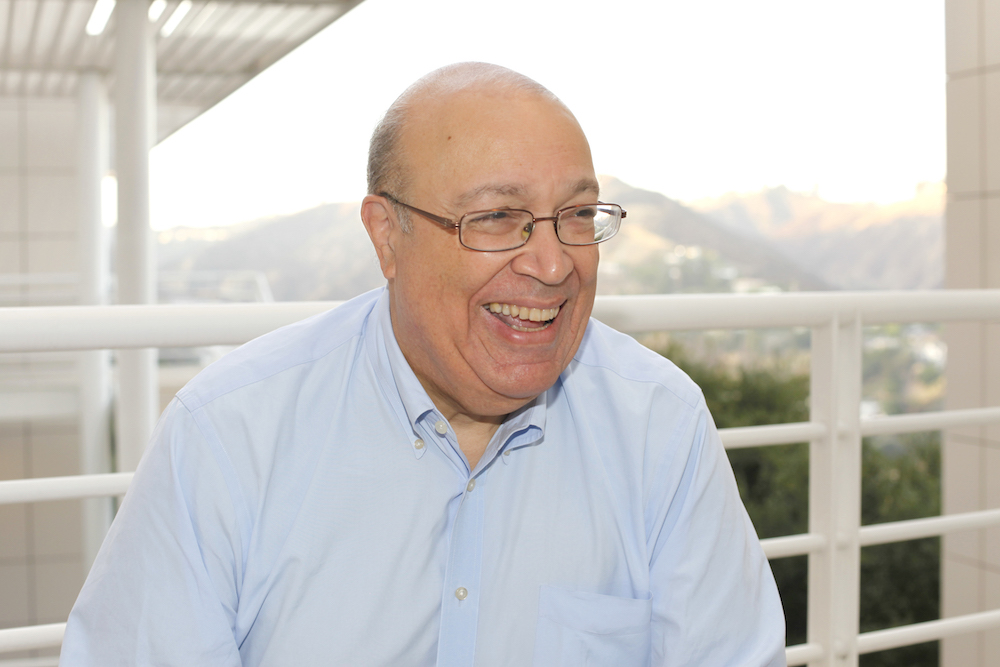 Adam Clayton Powell III is a veteran journalist and the director of Washington programs for the USC Annenberg School of Journalism. Before taking part in a Zócalo/Getty event titled “Is Journalism About Social Justice?” at the Getty Center in Los Angeles, he popped by the green room to chat about working with Quincy Jones, his spud preferences, and the advice that landed him on national news at age 18.

Where do you get your news?

Online, because I can read faster than other people can talk.

So when you say online, do you get it on your desktop, or on your phone?

Yes. I have a pretty set routine, which is every morning, I first go to the BBC, then go to a couple of aggregators: Google News, Drudge. And then hit, in this order, Washington Post, New York Times, Wall Street Journal, London Telegraph, and the South China Morning Post—as quickly as I can because I don't have a lot of time.

How long does all that take?

I try to do it in a half hour. Having experience scanning wires for decades helps.

I don't think there's any set time. Sometimes it's when I've just heard a really interesting piece of music. Sometimes it's after I’ve had a martini. There’s no set time. I've had to be a producer early morning and late night and all in between.

People who make mistakes unnecessarily. When you see something that someone has done, or that some people have done, an unforced error in journalism or information or engineering, it’s just carelessness.

If you could have a superpower, which one would you like to have?

Oh boy. My first thought was omniscience, but then what do you do with it? Well, in my head, with omnipotence, I could really change the world. But would I have the wisdom to do it?

My next question: fries or onion rings or something else?

What is the best advice you’ve ever gotten?

“Stay here.” There’s a story behind that, obviously. I was an intern between my freshman and sophomore years at CBS News, and I got to go to the Democratic National Convention in 1964. I asked CBS’s producer in charge of convention coverage, can I go on the floor? And he laughed at me: Don’t be ridiculous, CBS has eight floor passes; four of them are for the floor correspondents, and four of them are for the photographers and videographers. If you get another floor pass, of course you can go on the floor, but you can’t get one from us.

So I wound up getting another pass from another news organization that had more than it could use, and so I went back and I said, OK, I got a floor pass. Oh, OK. Why don’t you go with Mike Wallace?

Well, at one point, Mike’s electronics broke down, and he said, I’m gonna go back to the newsroom briefly and get another batch. I said, do you want me to come with you? And he said, stay here. So he disappeared off the floor just as the lead story of the night was happening right in our zone. Fannie Lou Hamer of the Mississippi Freedom Democrats walked onto the floor in the empty Mississippi delegation.

And so I didn’t have a wireless, obviously, but there was a CBS black phone that I picked up and called: Somebody needs to get over here because Fannie Lou Hamer just walked on the floor. Don Hewitt was running the floor and he gave me to the executive producer of the whole convention. And so he said, what’s up? I said Fannie Lou Hamer is walking on the floor—this could be the lead story of the night. He said, where’s Mike? I said, he’s in the newsroom. He said, OK, who’s this? I said, Adam Powell, the intern. He said, Oh, have you done this before?

Well, before I could say, on college radio, he said, there should be a mic nearby. I said, I see it. He said, pick it up. I picked it up. Can you see Balcony Camera 44? I see it. He said, OK, you’re gonna get your cue from Roger Mudd, you’re on in about 10 seconds. And so, at age 18, I reported live from the floor at the National Democratic Convention with the lead story of the night. Of course, Mike never forgave me. He said, that’s the last time I’ll tell an intern to stay here.

You’ve traveled all over the world. What's the most amazing meal you've eaten?

The most amazing was probably in Japan. I was USC’s Vice Provost for Globalization, and the USC Alumni Club of Tokyo took me out to lunch. I don't want to know how much it cost. It was just one astounding dish after another, each one beautifully presented.

Do you have a favorite place to take out-of-towners in L.A.?

I don’t know if it’s still there, but there used to be a really funky hotel, which I think was called the Hotel Figueroa, which was there before that area around Staples got all glitzy. I heard about it from students, who would go there at night and get cheap drinks. It was really old L.A.

You worked at Quincy Jones Entertainment. Did you learn anything there that gave you a fresh perspective on the news?

Oh yes. He would ask me to do crazy things. On one trip, I thought I finished what he wanted with the artists there. And he called. He said, don't leave. I'm gonna charter a 747 and Michael [Jackson] and Oprah and I are going to come over, we want to do a show. Oh, OK, I said, you're gonna bring a producer? No, you produced conventions for CBS, right? Yeah, I answered. Well, you're gonna produce a concert. Oh.

And Quincy knows what he wants. He said, OK, I want it in a stadium, between the white and black area, so they're gonna go. I want high security. I want this, I want that. I said, I've never done anything like this. And he was like, you can do it.

And so after working for Quincy, nothing else was a challenge. He actually canceled that event at the last minute because Oprah couldn't leave, so he said we’ll do it some other time.