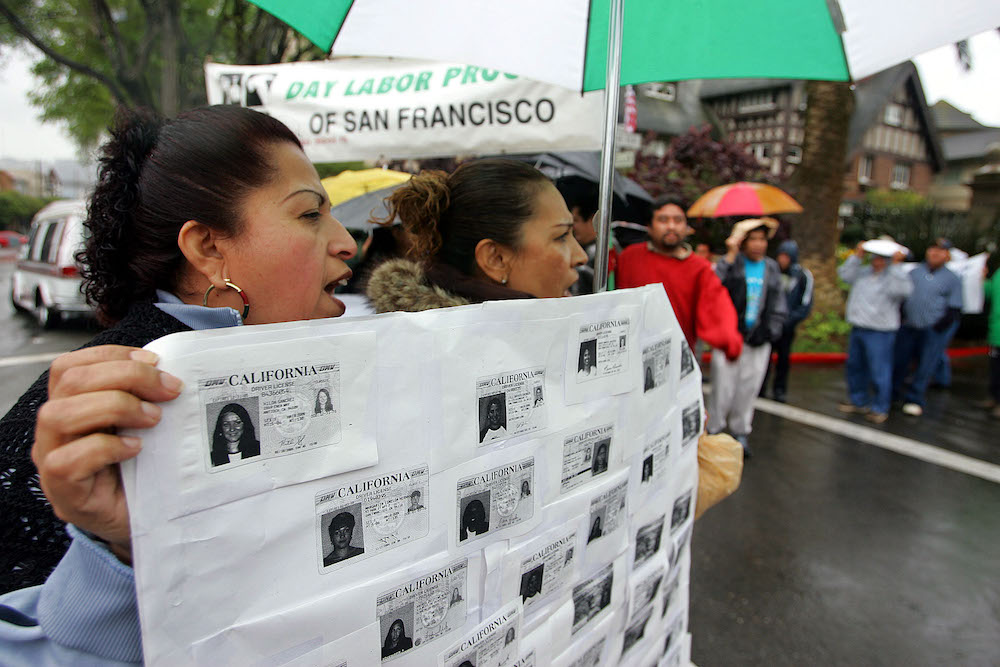 A 2005 vigil outside Senator Dianne Feinstein’s home to protest against the passage of the federal "Real ID Act." Courtesy of Eric Risberg/Associated Press.

Do you love this country, this state, and your freedoms?

Then show it. Defy your state and national governments—and refuse to get a “Real ID.”

There are bad ideas. There are very bad ideas. And then there is Real ID—a concept so dangerous and fraudulent that it deserves to be the target of a massive boycott by patriots of all stripes.

“Real ID” is the term for state driver’s licenses that meet federal guidelines approved by Congress during George W. Bush’s administration. The requirements are only now being enforced by the Trump administration. As of October 1, 2020, you will not be allowed to use a driver’s license to board a domestic flight—or to enter federal facilities or buildings where you would have to show ID—unless that driver’s license is a Real ID.

A Real ID driver’s license will have a star on it, but otherwise might not look much different than the one you already have. The difference is that you have to produce more documents to get one. These may include an original birth certificate, a social security card, a marriage license if your name has changed, two proofs of residence, and other documents to prove that you reside lawfully in the United States.

Such requirements may sound like they provide more security, but in fact the opposite is true. The acts of forcing people to submit more identification and then putting that personal information in databases actually introduces new risks. Real ID will make it easier for hackers and terrorists to steal our identities, and for governments and corporations to discriminate against us.

And by making Real ID a requirement for travel within the country, the American government is effectively creating an “internal passport” of the sort that oppressive regimes (including North Korea) use to limit their people’s freedom of movement, and to create distinct classes of citizens.

With state governments—including, disgracefully, California’s—now encouraging people to get Real IDs, the best defense is to refuse to comply. If enough Americans opt out, Real ID won’t be able to gain enough of a foothold to be a standard.

Those 100 million Americans without Real IDs, or some federally sanctioned ID like a passport, should refuse to get them. Those of us who have compliant IDs should refuse to present them, and insist on our right to access the airports and federal buildings our tax dollars pay for. Such defiance would create unbearable pressure on airlines, and on our governments, to back away from the rule.

And every patriotic American should be calling, texting, emailing, and annoying the hell out of every elected official and government worker they know until the Real ID is as dead as Stalin, the sort of person who would have appreciated it.

This American horror story started with 9/11, when hijackers used fraudulently purchased Virginia driver’s licenses to board planes, which they then flew into the World Trade Center and the Pentagon. After that, states cracked down on driver’s license fraud and beefed up security measures, and the federal government boosted airport security. There haven’t been any hijackings since.

That should have been the end of it, but the American security state never stops pursuing more control over our lives. So Real ID—imposing onerous new requirements on state-issued IDs, including driver’s licenses—passed Congress in 2005, with little debate, since it was part of a bill that funded tsunami relief.

The legislature and governor should stop the DMV from issuing any more Real IDs and pass legislation that bars California retailers, landlords, and other institutions from requesting or requiring Real ID. And our Congressional representatives should attach a repeal of Real ID to any and all must-pass legislation. This is a cause well worth shutting down the government over.

As states started considering how to comply with Real ID, they became alarmed. Issuing the IDs to all drivers would be costly and violate people’s privacy, without producing any demonstrable improvement in security. Under Real ID, states would be required to link their driver’s license databases together, effectively creating a national database that would be searchable by a federal government already engaged in mass surveillance of our calls and digital communications.

So many states, both blue and red, resisted implementation of Real ID, that the federal government issued a series of delays. When President Obama, a critic of Real ID, was elected, his administration essentially ignored the requirement.

But the xenophobic Trump administration has revived Real ID in 2017, claiming it was needed to protect the country against foreigners. The Department of Homeland Security applied pressure by setting an October 2020 deadline for all states to issue Real IDs. Most states quickly surrendered because of carrots (more federal money), sticks (the fear that their citizens would be unable to board planes, creating anger and economic costs), and the politics of looking weak on security. Three states—New Jersey, Oklahoma, and Oregon—have yet to issue Real IDs, though they have pledged to comply before the deadline.

With the states having caved, regular citizens are the last line of defense against Real ID and its many perils.

Real ID will abet the federal government’s already out-of-control discrimination against immigrants and their families. States like California, which offer driver’s licenses to undocumented immigrants, have to issue two different kinds of IDs, one Real ID and another that does not conform. This instantly makes a potential target of immigrants—and non-immigrants for that matter—who carry a non-compliant driver’s license. ICE will very likely compare DMV databases to Real ID databases to identify people who didn’t qualify for Real ID.

And that is only part of the problem. Real IDs could quickly become national IDs that might be required for getting a job, renting an apartment, arranging child care, picking up a prescription, boarding a train, making hotel reservations, entering national parks, paying with a credit card, or—eventually—exercising your right to vote. Before long, those who can’t get Real IDs will be second-class citizens.

The whole idea is discriminatory—against Americans. Under Real ID, an international criminal with a valid passport can automatically travel around our country as he or she wishes. But your neighbor who can’t find her certified birth certificate can’t fly Southwest to Phoenix to watch spring training baseball.

Real ID will be harder to get for women who changed their last name upon getting married; since they will have to produce more documents to account for name changes. There are also horror stories about naturalized Americans being denied Real IDs because of bureaucratic suspicions about their foreign birth certificates.

This national nightmare may start at the airports. The travel industry has estimated that 80,000 people would be barred from boarding a plane daily under current laws. Such an event would occasion serious disturbances at airports, and put airlines and the economy at financial risk.

The only thing worse than not having a Real ID might be having one. Real IDs have been called “hacker bait,” since they would give criminals and others another supposedly trusted identification to penetrate. Even worse, because Real IDs are machine readable, they would allow for even wider tracking of our movements and actions. And if you lose a Real ID—or it malfunctions—get ready for bureaucratic nightmares that would make Kafka blush. Newspapers will carry stories about people with Real ID problems who can’t access government offices to resolve them, because they don’t have Real ID.

Real ID will also tie California in knots. The vast majority of the state’s 27 million drivers don’t have Real IDs, and the dysfunctional DMV can’t meet the demand. And the federal government has already proven an unreliable partner in complying with Real ID. In 2018, California issued more than 2 million Real IDs—but then the Trump administration changed the standards for issuance without warning. (Fortunately, those Real IDs remain valid, but must be renewed at the higher standard.)

When I went on the California DMV site to inquire about what I would need to do to get a Real ID, the site told me not to get one until 2022, when my license is up for renewal. That’s because I have a U.S. passport, and can fly or enter a federal facility with that. But most Americans don’t have a passport.

For all these reasons (and more that I don’t have space to list), it’s high time that California and its political leaders stop being distracted by lesser threats—like facial recognition—and focus on protecting us from the immediate threat of Real ID.

The legislature and governor should stop the DMV from issuing any more Real IDs and pass legislation that bars California retailers, landlords, and other institutions from requesting or requiring Real ID. And our Congressional representatives should attach a repeal of Real ID to any and all must-pass legislation. This is a cause well worth shutting down the government over.

Defiance isn’t easy, but it’s our best available strategy in this case. It’s also necessary, because Real ID is incompatible with life in a free society.