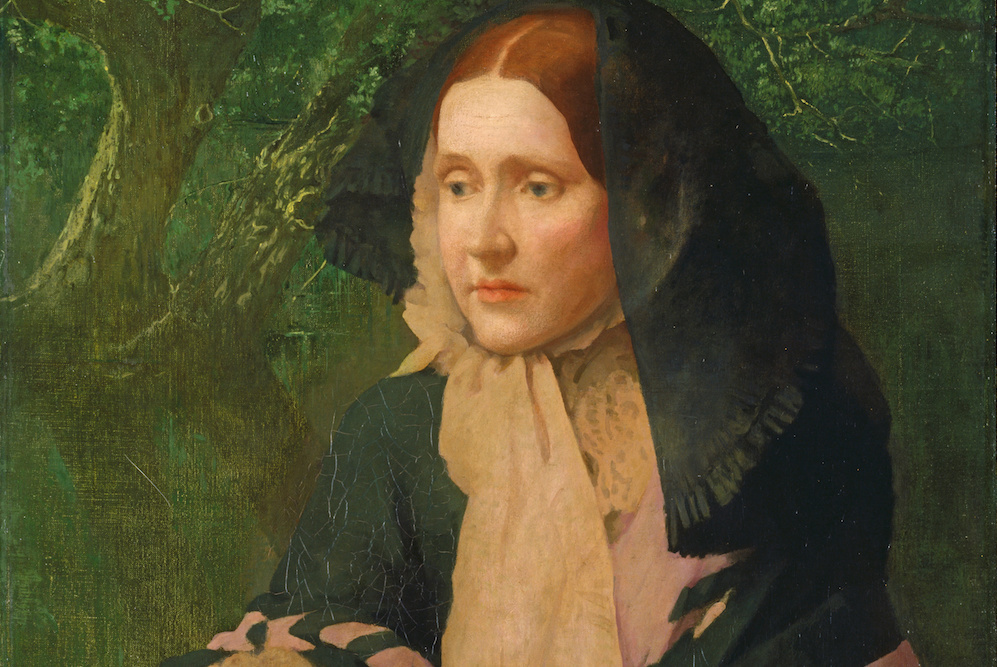 Julia Ward Howe was best known as the writer of the “Battle Hymn of the Republic”—but, she told her granddaughter, she hoped to be remembered for her wide-ranging scholarship and sense of public duty. Courtesy of the Library of Congress.

Julia Ward Howe’s fame rests largely on “The Battle Hymn of the Republic.” Written at one of the Civil War’s darkest moments, the poem appeared on the front page of the February 1862 issue of the abolitionist Atlantic Monthly, and quickly became the best-known anthem of the Union cause. It appeared in newspapers across the North and West, while preachers incorporated it into their sermons. President Lincoln wept as he heard it sung in the Capitol in 1864.

Yet Howe hoped to be remembered for much more. By its very success, “Battle Hymn” simultaneously made and obscured her reputation. As she told one of her granddaughters late in life, pointing to the shelves of books that lined her large library, she wanted to be remembered for her mind, for a lifetime of study devoted to the world of ideas. Steeped in the writings of historians, novelists, and most of all the German philosopher Kant, Howe was an active participant in New England intellectual circles. Well known for her writings and public speeches which attracted flocks of fans from across the U.S., Howe viewed her erudition as a means of uplifting American life—of delivering on the utopian, romantic moral ideals of equality and human brotherhood that Transcendentalists like Emerson and Thoreau had promoted before the war.

Howe was born in 1819, in New York City. Her mother, Julia Cutler Ward, died when young Julia was only five, leaving a shattered husband to raise six surviving children. Samuel Ward was a wealthy banker, philanthropist, and patron of the arts. He was also an increasingly devout Episcopalian concerned about Julia’s soul and mind, as his poignant letters to her and about her reveal. Ward saw to it that Julia was baptized and confirmed in their parish church, though she would later renounce orthodox Christianity for liberal Unitarianism or “free religion,” as she called it.

Howe recalled her father as a narrow, suffocating Calvinist evangelical, but he took risks in how he educated his children. He surrounded his daughter with books, provided singing and piano lessons, and sent her to private academies in the city before hiring a German-trained bibliophile to teach her and her sisters while his sons were educated at the progressive Round Hill School in Massachusetts. Julia’s capacity for hard work and her considerable intellectual gifts were obvious. When only 17, she published an essay on the poet Alphonse de Lamartine with her own translations from the French. At the age of 20, she published a review of a new American edition of the works of Goethe and Schiller.

Julia Ward’s marriage to physician and philanthropist Samuel Gridley Howe in 1843 brought her into the hub of Boston abolitionism, Transcendentalism, and Unitarianism. It was a time of turmoil. Calls for immediate emancipation of enslaved people threatened the survival of the Union. Liberal theology challenged the deity of Christ, the reality of miracles, and the historical veracity of the Bible that had been so central to the Calvinist orthodoxy of New England’s pulpits. Julia’s friends, mentors, and pastors led these reform campaigns, and she discovered a world attuned to her precocious intellect. The demands of a busy household and social life and the rearing of six children made moments of quiet study rare and precious, but Howe continued to read and write. In the 1850s, she helped edit an abolitionist newspaper with her husband, published two largely well-received volumes of poetry, and contributed poems, reviews, and travel essays to the Atlantic Monthly. Her public speaking career began in the 1860s—tentatively at first, but by the 1870s she was on her way to becoming one of America’s busiest professional lecturers, speaking from coast to coast on topics ranging from ethics to modern manners to favorite authors—along with crowd-pleasing accounts of how she wrote her “Battle Hymn.” Howe frequently spent months at a time in Europe, soaking in the art and architecture of the continent’s great cities. She even hired a rabbi in Rome to teach her Hebrew.

Philosophy was never mere airy speculation for Howe. She wanted answers to the riddles of life. She was eager for guidance on the path to duty, the ethical life, and human progress.

Her great passion was German philosophy which, with its idealism and intuition, had supplanted the empiricism of John Locke among intellectuals of the time. A minister in Howe’s youth, likely her Episcopal pastor, “frowned with great severity upon my early study of the German language,” she later recalled; to him, German literature was undermining American Protestantism. Despite this warning, Howe became and remained proficient in the language—and throughout her life was quick to say that of all the influences on her thought, German philosophy did the most to form her ideas about God, man, and immortality, and the ethical life. Howe read Goethe, Schiller, Fichte, and Schelling. She became frustrated enough with Hegel’s seemingly willful obtuseness to abandon him in favor of Immanuel Kant, the “Master”; her journals indicate that by the 1860s she was studying Kant almost daily. Kant freed her, she testified, from dogmatism and religious enthusiasm on one side and skepticism on the other, taught her the limits of human knowledge, and gave her the confidence to build her own philosophy and ethical ideals from her consciousness. In 1866 Howe wrote a poem about her debt to him, “On Leaving for a Time the Study of Kant”: “Dull seems the day that brings no hour with thee, / O Master! lapsed to eternity.” Before Kant’s influence, she claimed, she had walked in “rude chaotic ways” until he “re-form’dst my days.”

Philosophy was never mere airy speculation for Howe. She wanted answers to the riddles of life. She was eager for guidance on the path to duty, the ethical life, and human progress. She wanted a “helpful” philosophy, she said, and she wanted to share it with others. Her public career was driven by this sense of duty to the greater good of humanity. Her “heart’s desire,” she wrote in 1895, “was to assist the efforts of those who sought for this [helpful] philosophy of life.”

Though she read widely in several languages, she chose carefully the books she read and urged others to do the same. “Life is too short and too much crowded with great interests to allow us time for utterly profitless reading,” she warned in 1890. A few, well-chosen books, the works of the truly great philosophers, poets, critics, and historians, would repay attentive effort. Books worth reading required an attentive mind, and the right intellectual and moral attitude—reading was not to be self-indulgent or frivolous. New and controversial books should not be shunned; rather, they must be read against the background of what had come before. The modern skeptics Herbert Spencer, Charles Darwin, and Thomas Huxley must be read in light of Plato and Kant. 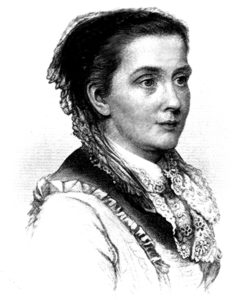 Howe’s image appears in the History of Woman Suffrage, published in 1887. Courtesy of Wikimedia Commons.

But not all Howe’s reading was so heavy. She made room for leisure and even amusement, reading Thackeray, Dickens, Holmes, Longfellow, Macaulay, Howells, James, George Sand, Balzac, Dumas, Hugo, and many other American and European authors (while urging others to avoid scandalous books, such as Tolstoy’s Kreutzer Sonata). Even newspapers and journals were essential to practical philosophy. Through them, Howe argued, we “know and understand the life of our own time.” How else could one serve the needs of society? And to be sure, the press provided a regular outlet for her ideas, from children’s magazines to esoteric philosophical journals.

Howe’s erudition and dedication are obvious in her lectures and conversations at the Concord School of Philosophy and Literature, which met for a few weeks each summer from 1879 to 1888 on the grounds of Louisa May Alcott’s Orchard House. The informal school fulfilled a longtime vision of Alcott’s eccentric father, the Platonism and reformer Bronson Alcott. For her part, Louisa May Alcott professed to have no interest in speculative philosophy but put up with the hundreds of visitors who streamed to Orchard House because she loved her father and was delighted to see his dream fulfilled. “If they were philanthropists, I should enjoy it,” she told the president of Princeton, “but speculation seems a waste of time when there is so much real work crying to be done. Why discuss the ‘unknowable’ till our poor are fed and the wicked saved?”

Many who shared Louisa May Alcott’s impatience with the school—which welcomed college students and professors, members of the general public with the leisure and stamina for study, skeptics, reporters, and the merely curious—criticized it as an exercise in nostalgia. For a modest fee, seekers could bask in the mysticism of Bronson Alcott, hear some of the aging Ralph Waldo Emerson’s last lectures, discover an unexpected Henry David Thoreau in the unpublished journals read by his literary executor, and participate in long, free-flowing discussions of ancient Greek and modern philosophers, poets, and playwrights. There were walks in the woods and visits to the home of Nathaniel Hawthorne. The tone was serious, the setting bucolic, and the depth and breadth of thought dizzying to those uninitiated into the higher realms of Kantian and Hegelian speculation.

Aside from Emerson, Julia Ward Howe drew the largest crowds at Concord, lecturing on Aeschylus, Dante, Goethe, Emerson, and her beloved Kant. Howe paid tribute to Kant at the Concord School in 1880, during what was billed as the Kantian Centennial to mark the anniversary of The Critique of Pure Reason. The content of her lecture is not easy for the modern reader to penetrate, but her debt to the Enlightenment philosopher was obvious. Kant’s ethics provided the key to self-sacrifice for the greater good as she conceived it, to democracy, progress, and human freedom.

For the organizers and faculty at Concord, and certainly for Howe, there was no conflict between speculative philosophy and reform—the summer sessions sought to rejuvenate a nation threatened by the unlimited pursuit of wealth, scientific materialism, and agnosticism. Despite the Civil War and emancipation of slaves, America still needed redemption. “In Kant’s writings I heard the eternal ‘Thou shalt’ in its trumpet tone of victory,” Howe told her Concord audience. “The possibility of a rational solution of social and national difficulties, the superiority of reason over force, and the applicability of the first to what been always generally deemed the province of the latter—are not these the results of applied philosophy?”

And were they not the ultimate goal of the American experiment? They were certainly the goals of Howe’s conception of the national mission. Howe lived and worked among New England Idealists confident that the Absolute permeated nature, society, and the individual, summoning humanity to the duties of the ethical life, and leading on to freedom, unity, and immortality. “If every country were governed upon principles of true philosophy,” the Battle-Hymn poet asked, “where would be war and crime, the scourges of the human race?”