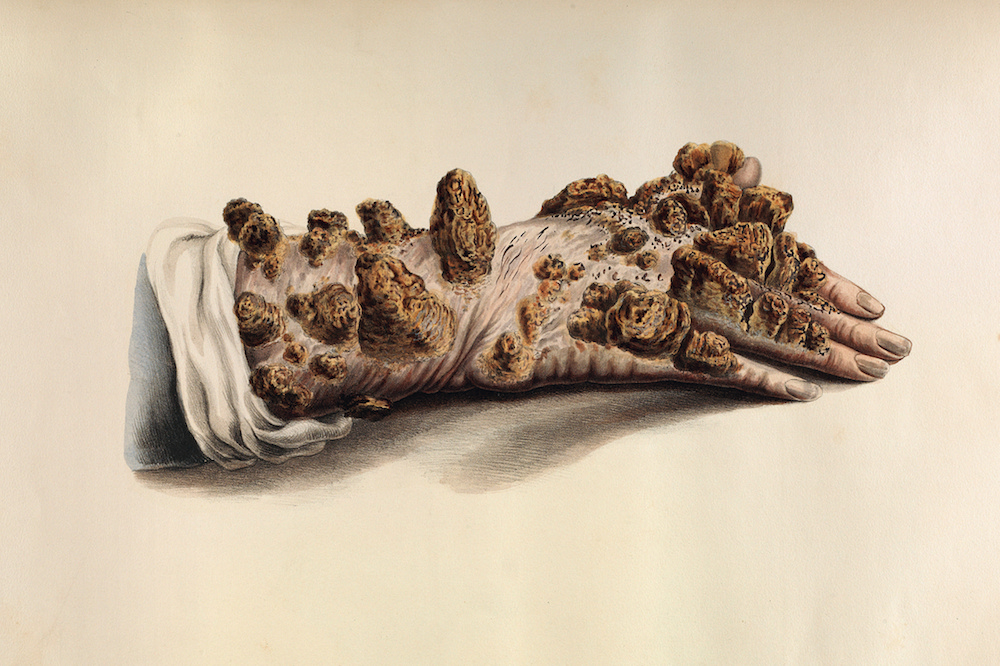 Severe tubercular leprosy (or ichthyosis) of the hand. Courtesy of the Wellcome Library, London.

These difficult questions are at the heart of our fear of diseases. The story of leprosy—and about other, newer maladies—helps explain how fears spread and endure, especially within Judeo-Christian cultures.

The Book of Leviticus is a good starting point. Chapter 14 returns obsessively to the problem of distinguishing leprosy from less serious skin afflictions. How is the priest to know if a spot, blemish or sore is “clean” or “unclean”? If the bright spots are “darkish white,” Leviticus advises, it’s merely “a freckled spot” and the person is “clean.” But “if the rising of the sore be white reddish” the person is leprous or “unclean” and must be isolated (“without the camp shall his habitation be”).

Of course, the trouble with such diagnoses is that each identifying symptom prompts further uncertainty. How “darkish”? How “reddish”? How “white”?

Leprosy has always had an extraordinary signifying power, of being more than itself and becoming a magnet for wider political or cultural anxieties. Leviticus was composed during a long period of political upheaval between 538 and 332 B.C. Rumors of the poisoning of wells by lepers in 14th-century France grew into a wider fear of a conspiracy involving Jews and the Muslim king of Granada, a potent cluster of pariah groups with leprosy at its core.

In a Hollywood movie made during the Cold War, Big Jim McLain (1952), John Wayne plays an investigator for the Un-American Activities Committee sent to Hawai’i where a sinister communist bacteriologist is planning to infect the water supply. Approaching Honolulu, the film zooms in on the famous leper colony on Molokai, associating a disease thought to have been introduced by Chinese indentured laborers in the mid-19th century with the danger now posed by communism.

For much of the 19th century, leprosy was understood by advanced metropolitan medicine to be hereditary and constitutional rather than contagious. An Empire-wide survey of the disease undertaken by the British Royal College of Physicians in the 1860s concluded that leprosy was ‘essentially a constitutional disorder’, that it was overwhelmingly an affliction of the “dark populations” of the empire, transmitted indigenously and unlikely to jump barriers of geography and race, and that it was best tackled by improving the health and diet of native peoples.

But to many living in colonial settings, this seemed counter-intuitive. In India and the West Indies, especially, traditional practices of isolation—sending the leper “without the camp”—continued, and the more progressive approach, which challenged the stigma and opposed segregation, was widely ignored.

Medical opinion was correct in concluding that leprosy had low levels of communicability and was essentially a disease of poverty, though the prevailing theory of causation was wrong. But then came Hansen’s discovery of the leprosy bacillus, at a time when micro-biology was discovering the bacterial causation of other diseases (tuberculosis, for example), reinforcing traditional fears of leprosy and undermining the idea that Europeans were immune to it.

Why has leprosy inspired such fear? The leprous body—decomposing and putrefying while still living and able to reproduce—has often provoked horror. The Book of Numbers in the Bible defines leprosy as a condition in which the flesh is “half-consumed,” challenging the fundamental boundary between the living and death. The fear of losing this boundary is what has so often led to the construction of other kinds of borders to protect the living. Among such borders has been the lepers’ squint—that feature of medieval church architecture which allowed the leper to see into the church but not enter or partake of communion.

Hawai’i was the locus classics of the intensification of fear around leprosy in the later 19th and early 20th century, and became the earliest example of compulsory segregation in the modern imperial world.

A more stringent kind of exclusion—one characteristic of the imperial world of the late 19th and 20th centuries—was the leper colony. These isolated settlements, frequently placed on uninhabited islands, were for those thought to have the disease.

Hawai’i was the locus classicus of the intensification of fear around leprosy at this time and became the earliest example of compulsory segregation in the modern imperial world. A rapid spread of the disease in the Hawai’ian islands group in the 1850s and 1860s resulted in a leper colony being established on an isolated peninsula on the island of Molokai. As an imperial debate over leprosy widened, Hawai’i became a laboratory for studying the disease.

Most of the cases involved Native Hawai’ians but a few Europeans also contracted the disease and were taken to the settlement. The unusual speed of this increase in the disease among a small population on a remote group of islands where it had not previously existed attracted international attention. It seemed to confirm that leprosy really was contagious, capricious, with no regard to racial boundaries.

Leprosy in Hawai’i was commonly blamed on Chinese indentured laborers and was known as mai pake, “the Chinese evil.” And here is where Charles McEwan Hyde, a Protestant missionary and schoolmaster in Honolulu, enters the story.

There had been several cases of leprosy in the college Hyde ran. One morning in 1884, putting on stockings just back from a Chinese laundry, Hyde noticed a rash and a discolored spot on his ankles. Then blotches began to spread over his body. He wrote to a friend:

I presume I have been poisoned, whether with syphilis or with leprosy remains to be seen … I saw only last week at Dr. Arning’s a leprous boy with matter exuding from his stockings which doubtless were sent to some Chinaman to wash.

The “Dr. Arning” of this note was a leprologist employed by the Hawai’ian government to investigate how the disease was communicated. He had conducted an experiment of implanting leprous tissue in a convicted murderer to see if it would take. It didn’t. But that finding didn’t stop fear from taking hold.

Moreover, many at the time thought of leprosy as the final stage of syphilis. So when Father Damien, the Catholic priest who lived and worked among the lepers of Molokai, died in 1889, Hyde—the missionary and schoolmaster—published an open letter suggesting the priest had died of syphilis from having sexual relations with female members of the colony. Robert Louis Stevenson, who had visited Molokai and met Damien, replied with a blistering response on behalf of the priest. In the meantime, Hyde’s worst fears had been allayed, his skin disorder proving to have been eczema.

Chinese indentured laborers were blamed for introducing leprosy throughout the Empire. In Australia, they were regarded as a threat to the racial integrity of the emerging nation—external contaminants dangerously prone to sexual relations with Aboriginal women. The consequences of this fear were severe. A group of Chinese lepers removed to an island in the Torres Strait starved to death. In 1903, a Chinese fruiterer in Wellington, Kim Lee, was diagnosed with leprosy and removed to a large rock off Matiu/Somes Island in Wellington harbor where he lived in a cave and had his food delivered by rope. He died the following year.

“I would rather a case of the plague here than see a hundred Chinese land,” declared Richard John Seddon, who served as Prime Minister of New Zealand from 1893 to 1906. “The chow element in New Zealand is like a cancer eating into the vitals of our being … insidiously encompassing the doom of its victim.’

When considering this history from today, comparisons with Covid-19 coronavirus—or Sars-CoV-2, as it has just been renamed—suggest themselves. The same uncertainties about cause, transmission, treatment, the pattern of spread and the issue of asymptomatic carriers that spread leprosy fears now raise the question of whether or not to quarantine. And that question, in turn, is creating world-wide anxiety and provoking responses that go beyond the purely medical and gather in their train other cultural fears and prejudices.

The most obvious connection between leprosy and coronavirus is the stigmatization of China. The West’s historic view of the Chinese as carriers of infection has been reactivated by Sars-CoV-2. Reports of the random abuse and occasional physical assault are spreading. I’ve come to see the face masks so commonly worn by Chinese people in European cities as not only a protection from the virus, but an attempt to reassure others: we might be Chinese but we’re ‘clean’; you have nothing to fear. Insofar as this inevitably becomes as much a warning as a reassurance, face masks are currently reminding me of the leper’s bell.

Matteo Salvini, the far-right leader of the Northern League and recent Deputy Prime Minister of Italy, has exploited the outbreak of coronavirus in his country to reinforce his virulent opposition to refugees entering Italy from North Africa, this despite the negligible number of cases so far reported from that continent.

Donald Trump has minimized the risk of the coronavirus, saying “one day it’s like a miracle, it will disappear.” But when he belatedly acknowledged its virulence he called it the “Chinese virus.” As the history of leprosy suggests, fear and panic—and the prejudices and stigma they provoke—can be as worrying as the disease itself.