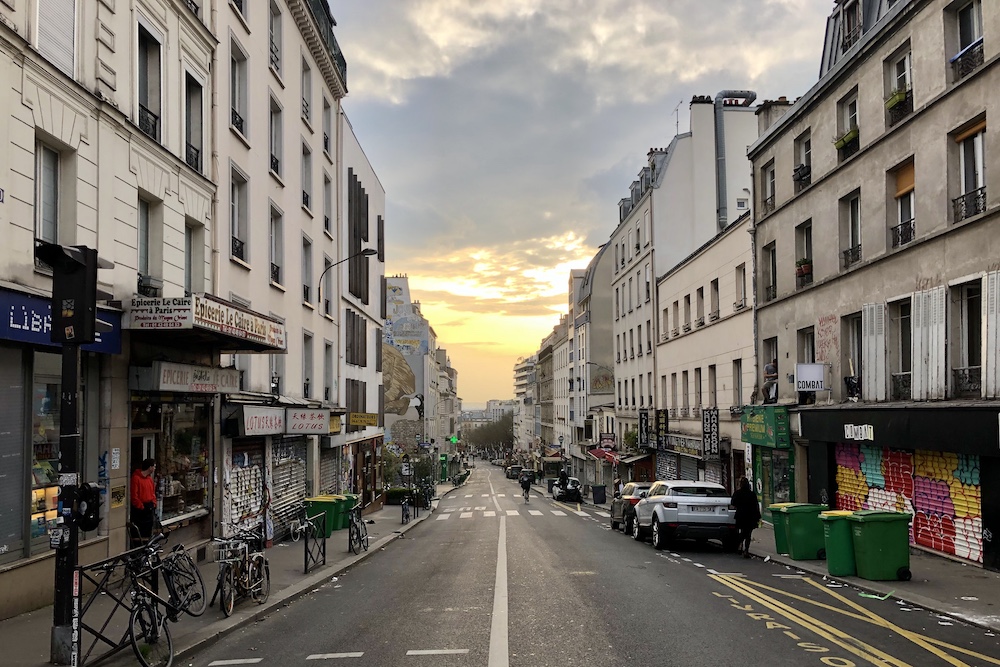 A snapshot of Paris under lockdown. Courtesy of Olivia Snaije.

Early this morning, I was jogging around the perimeter of the Buttes Chaumont, a now-closed park near my house, when I saw a man on a bicycle. He sailed down the empty rue de Crimée, chest thrust forward, arms open. I recognized that sensation of freedom.

A woman on the other side of the street was dragging a shopping cart. On top of it rested a bunch of multicolored tulips. “Excuse me,” I shouted to her from across the street, “where did you get those?”

“At the Lidl,” she said, referring to a nearby supermarket chain. “Hurry up.” We shared a grin and went on our way.

As I write this, it’s only day eight of confinement here in Paris. I keep thinking about the essay the Italian author Francesca Melandri wrote for the French daily Libération last week: “I am writing from Italy, and therefore from your future. We are now where you will be in a few days …”

Melandri was writing to the French, but her words could be applied to any country. Last Friday, the number of people with COVID-19 in France was estimated at 12,000-plus people; exactly two weeks ago, I remember remarking to my husband that the poor Italians now had more than 10,000 cases.

It was barely 10 days ago when I was getting ready for a trip to London to visit one of my sons, who teaches in a state school. When I got to the British capital, I heard several people saying that one had to “take it on the chin.” How do you take a virus on the chin?

The week before, I had been in Brussels to report on the last book fair held before all events were canceled. Was I, and everyone else there, oblivious? Irresponsible? Perhaps. But such a surreal situation as the COVID-19 is hard to accept, until one does.

Last week it felt rude to widely circumvent someone on the pavement. Today it doesn’t.

I’ve noticed that everyone on the street has their little routines. I wear latex gloves outside, and when I come inside, I take off my shoes, surgically wash my latex gloves, clean my phone and keys with rubbing alcohol, and wash the fruit and vegetables I’ve brought back, sometimes with soap. Some friends do less; others do more. My neighbor from the third floor—who is leaving her apartment temporarily to move in with her elderly mother—said she put her shoes in a plastic bag outside her door.

My own elderly mother has Alzheimer’s and is in a home on the Left Bank. I used to go visit her every Saturday but with the new restrictions, I’m not allowed to anymore. I’m thankful she isn’t aware of time and hope that she won’t notice that weeks will go by, although I suspect she will.

My friend and neighbor on my same floor is barely leaving her flat. She is convinced she might be carrying the virus after spending four days of meetings with someone from Mulhouse, in eastern France, one of the epicenters of the outbreak. I do some shopping for her and drop food on her doormat. We have started chatting from our windows, feeling very Neapolitan. She says she has never been as busy as now—she’s the technical project manager for a platform that supplies e-books to booksellers and libraries.

Every morning I wake up thinking how surreal the situation is. By the end of the day, I am telling my neighbor over text message that I’ve gotten used to it. It’s like the movie Groundhog Day, she types back.

For the past five evenings, Parisians have been going to their windows at 8 p.m. to bang on pots and cheer on medical staff. It’s a nice, and growing ritual to thank and encourage them.

I like to check in on my friends who live alone—we all suspect we’ll be confined longer than the 15 days that were announced a week ago by President Macron. The other day, I walked downhill and across the giant Place de la République. Usually packed with people playing soccer, skateboarding, swing dancing and holding political demonstrations, it was deserted. From there, I made my way to the rue de Turbigo to see a friend. We spoke, me from the street, she from her second-floor balcony, until my neck began to ache from looking up.

I realized as I power-walked home that I had not followed the instructions that went into effect starting midday last Tuesday to stay within 500 meters of your home and could have received a fine of €135 ($150). I did have the form that we are now required to have any time we go out, downloaded from the interior ministry website, on which we declare on our honor that we’re only out for certain activities, mainly to buy food, go to the pharmacy or exercise.

My husband is originally from Lebanon, and we have many Lebanese friends. One called a few days ago, reminding me that during their 15-year civil war they would stay inside for months at a time, dashing outside for provisions when there was a lull in fighting. They often had no water or electricity. What he could confirm, he said, was that there was always an end to a period of confinement.

I am lucky in many ways, one of which is that I have no small children at home to keep busy, or older children to educate, or teenagers to confine. My husband and I sense our real world getting smaller, and turning inward. I now rely on my fruit and vegetable man for gossip—yesterday he told me that a shopkeeper in the neighborhood had been trafficking surgical masks, and a suspicious-looking man had come into his shop earlier to buy a banana and ask him if he sold masks. As it turned out, the questioner was a plainclothes policeman. The guilty shopkeeper was later arrested.

Within our constrained territory, my fellow citizens are surprising me, in negative and positive ways. Super-fit joggers, who seem to be upping their regimens because they no longer go to the office, will spit or blow their noses openly on the pavement as they whizz around the park. Customers waiting in line outside shops can be friendly and courteous, letting older people step in line in front of them, as far apart as possible. We have taken to cheering the garbage collectors whenever we see them, and they seem to appreciate it. Public transportation is still functioning but with reduced service. People can no longer get into the front of the bus—the drivers have a cordoned-off area and wear masks.

Our virtual world continues to expand. We have cocktail hour with friends in Paris and abroad. During one three-way cocktail session that included our Franco-British friend Nick—who doesn’t go out at all because he has an auto-immune disease and is 80 years old—he winked and said he’d now lived through three world wars. I knew he was a child in London during World War II, and also that he had been drafted to Algeria during its war for independence from France. Slow on the uptake, I eventually realized he was talking about President Macron’s solemn speech to the French on March 16, during which he said six times that the country was at war.

Planning meals has become a favorite pastime. My husband and I have agreed that lunchtime we each do as we please, but we sit together for dinner in the evenings, after we’ve shouted and whistled out the window. I exchange recipes via WhatsApp with friends who live a few streets away. We discover that the local Franprix supermarket sells preserved lemons that we need for a Moroccan chickpea soup. Last weekend they installed plexiglass shields for their cashiers, but I worry about one of them, a young man, who has been coughing for a week now, but is still working.

My husband, an expert on the economy and the Middle East, has never been so busy, and is using one of our adult sons’ rooms to do interviews with various TV stations. Maybe during this time I’ll pivot and become his agent… Again I think of Francesca Melandri’s essay from the future. Because all the things we are doing and thinking have already been done and thought before, by the Italians and the Chinese.

In early February I emailed an editor at a publishing house in China whom I had met recently to see how she was. Distressed, distracted, confused, and worried, she replied. Yesterday, she wrote in turn, asking how I was, encouraging me to stay safe, and to take care. Restaurants and cafés in Beijing had reopened the week before, she told me.

Every morning I wake up thinking how surreal the situation is. By the end of the day, I am telling my neighbor over text message that I’ve gotten used to it. It’s like the movie Groundhog Day, she types back.