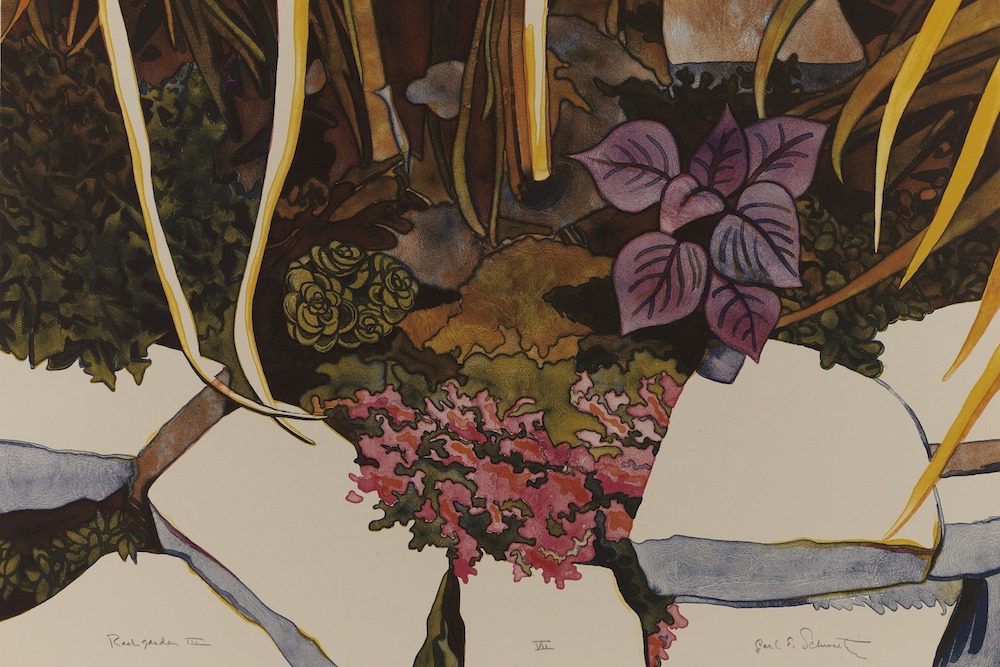 Back in “normal times,” Mark Paul writes, only a few familiar souls would wander by his garden. Now, just a few weeks later, there’s a steady stream of people who pass by with nowhere else to go. Courtesy of Smithsonian American Art Museum, Gift of Dr. Frederick P. Nause and Rebecca Nause.

SACRAMENTO—Our front garden hit peak bloom just as the COVID-19 death toll passed 200 in California. As usual, the California golden poppies seized control of the gravel borders along the driveway and, in a brazen move, advanced this spring into the chipped bark meant to provide walking space around the raised planter boxes. Now the last daffodils poke their heads out among the crimson flutter of the Greek poppies. The irises are flaunting wings and beards, each according to its wont, in random pairings around the yard. And the redbud is in full blossom on Mount Robin—the formal name for the mound of native plants my wife has let loose to the south of the front walk. 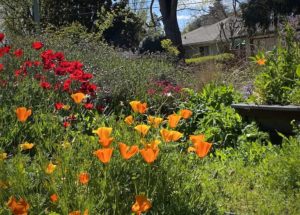 The garden has staged memorable spring performances before, though always to small audiences. We live four miles south of the State Capitol, well off the beaten path, on an eyebrow street just six houses long, connecting nothing to nowhere. Our hilly neighborhood of ranch houses was built without sidewalks in the early 1950s, when California planners were certain that walking was obsolete.

Weeks ago, back in normal times, only a few familiar souls would wander by. The dog walkers from the next block over. The slight blond teen walking bent, like a peasant woman carrying a bundle of firewood, under a backpack full of textbooks. The mother going to and from the nearby elementary school to retrieve her kids.

I haven’t seen the mother or the teenager since a substitute teacher at the elementary school died of COVID-19 and the schools shut down. But 13 days into the lockdown, as I sit in the garden to read on a sunny afternoon, what was once a trickle of walkers and bicyclists has broadened into a steady stream of people with nowhere else to go.

Many of the faces are new, and they arrive in family groups. The children are frisky and boisterous; the parents who trail them look like they’ve missed their naps. Some couples push baby strollers. Other couples push themselves, striding by fiercely to get the exercise they no longer get at the gym. In a role reversal, there are middle-aged children walking their elderly parents. The daughters tend to walk six feet to the side of the parent, letting them set the pace. The sons tend to lead, getting far out front, then pausing to let the parent shuffle within the prescribed distance before taking off again.

The irony here is that, for me, the social distancing that now fills our street is a social flowering. Coronavirus isn’t my first epidemic. In 1954, I was one of the 38,476 Americans paralyzed by polio.

There are lone walkers, too, talking loudly to their white headphones. One woman gestures with her hands, as if to make the decisive point in what may be a conference call in motion. In a few instances the person ambling up the street is someone we haven’t seen since a school committee meeting or a dinner party sometime in Bill Clinton’s first term. 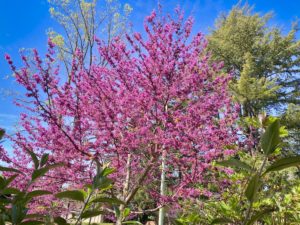 Often people stop to admire the garden. We talk across the wide bed of Jupiter’s Beard, and I answer the horticultural questions if my wife is busy. The one with the tangerine flowers is mallow, I say, and behind it is the lupine, another native.

The irony here is that, for me, the social distancing that now fills our street is a social flowering. Coronavirus isn’t my first epidemic. In 1954, I was one of the 38,476 Americans paralyzed by polio. Sixty-six years later, in a wheelchair and no longer driving, I don’t get around much anymore. That’s especially true during flu season, when I try to stay away from the contagion. My “weak breathing muscles,” as my brother-in-law, the anesthesiologist, puts it, make me a good candidate to become a statistic again. Before the coronavirus arrived, I was fully trained for the loneliness Olympics, and in these recent early heats I haven’t yet had to break a sweat.

Until three months ago, I thought my 1954 epidemic experience had prepared me for the fear too. 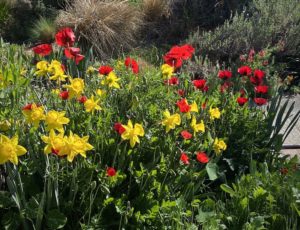 I have only a few memories of those early days: Waking feverishly on the night the poliovirus took hold and then collapsing on the pink tile floor after my father carried me to the bathroom. Lying the next day on a hard table, under bright lights, in a mint-green operating room, to get the spinal tap that would confirm my illness. Being taken to an isolation room where everyone around me was shrouded in gowns and masks; even my parents were allowed no closer than the doorway. I don’t remember being scared. But I don’t doubt that it was fear that etched those memories into my consciousness.

The boy soon put the fear behind him. Today, the man he became isn’t as successful. The fear comes and goes in waves throughout the day. It follows me to bed in the evening, and it greets me in the morning when I open my eyes.

I am not alone in this.

“Yes,” she says, “but I had a dream about the grim reaper coming to the door to sell Girl Scout cookies.”

I do not fear for us. We have been physically distanced from the rest of the world for a month now. The virus is unlikely to breach our garden moat, not even in the guise of a Thin Mint, but I cannot hold out the images and news of the world around us.

I try to keep things in perspective.

You know from your reading, I tell myself soothingly, that folly and cupidity have marked every epidemic. Mom and dad went through the polio epidemics without losing their poise.

You’re right, I reply to myself. But would they have felt the same if people in their time were holding “polio parties”? And my parents probably took some comfort in having a president who was competent enough to organize and execute an invasion to destroy Nazi Germany.

Close the computer, I tell myself. Go to the garden. You’ll find calm and escape there.

So I pick up a book, roll through the front door and down the ramp. It’s warm and the air is thick with the mingled scents of the blossoms. I hear the footsteps of a jogger coming up the street. I look up and see her head emerge above the borage in the planter. She is wearing a mask. It’s the first I’ve seen.

I look over at the Greek poppies. I had it wrong. They aren’t fluttering, they’re trembling. And inside the incandescent red bowls blazing in the sun, there is a shadow.