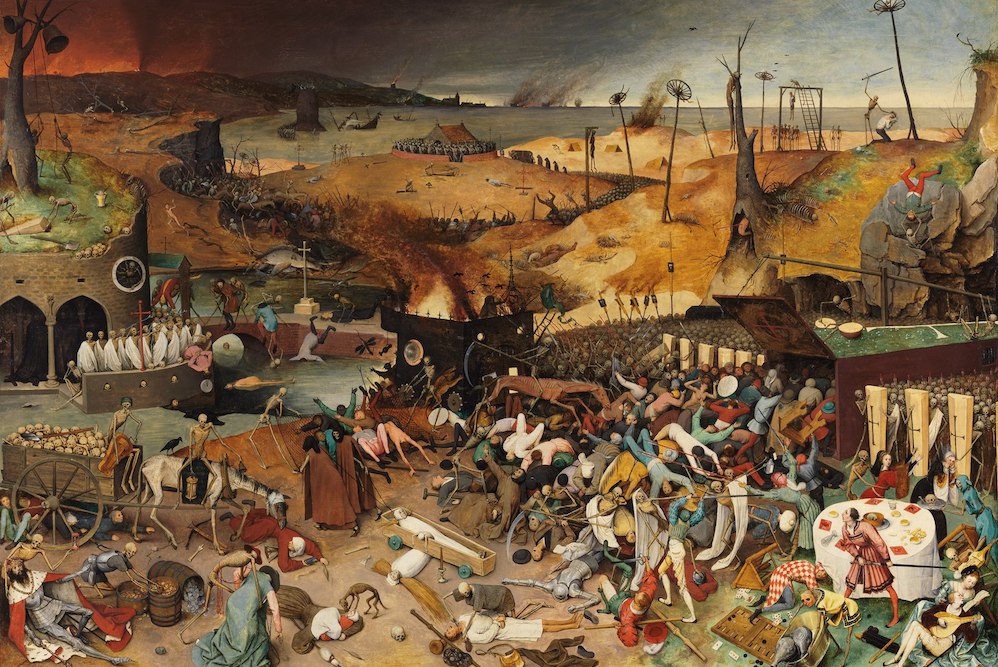 “The Triumph of Death” by Pieter Bruegel the Elder. Courtesy of Wikimedia Commons.

The island of Mrkan, one of over a thousand islands off the Dalmatian coast, is both idyllic and grim. Its precipitous pale cliffs, set against the turquoise Adriatic Sea, make it look like an impenetrable fortress. Indeed, a few centuries ago, it was a place to dread. It was where you waited to see whether you would die.

The Black Death hit Europe from 1346 to 1353 and gave us the word “quarantine.” Ragusa (modern Dubrovnik, Croatia) was the first city known to establish quarantine for all ships wishing to land at their port. Ragusa required ships to spend 30 days on that rocky island off the coast—Mrkan. This time was used to determine whether sailors or their goods were infected. Tainted vessels and their crews were forced to remain there indefinitely; corpses of the dead were hurled into the sea.

This practice of quarantine became a law in Ragusa in 1377, though quarantine was not a Dalmatian word. It comes from the Italian quaranta—for the number 40. This number became the preferred time for isolation because of its Christian significance. Forty appears in the Bible many times—from the Israelites spending 40 days and 40 nights in the desert, to Jesus fasting in the wilderness for 40 days. It was thought that the passing of 40 days led to purification. New mothers were expected to remain resting for 40 days after they gave birth.

Quarantine may feel new and shocking to the world now. But it’s very old. What’s different with COVID-19 is the scale of quarantine—almost everyone around the world has had to stay at home, a self-isolation that for some may go on indefinitely.

Another difference between the Mrkan quarantines, and what we face today, are the modern technologies that allow us to learn of cases on the other side of the globe within seconds. Before the 20th century, plague felt scarier because we knew so little, and there were fewer humans.

Back in the 14th century, over those seven years of Black Death, every country in Europe, the Middle East, and the northern coast of Africa were affected. And there was frightening uncertainty about the disease’s origins (it came from rats infested with fleas that transmitted the disease to humans through bites), and a strong belief that the Black Death was divine condemnation (which only made people feel emotionally worse).

Plague thus created claustrophobia. It injected fear into any contact and pulled communities, villages and households into tight fists, fearful that any outsider could be pestilent. This fear deepened the already common xenophobia of the times, and inspired witch trials, pogroms and other scapegoating of people and groups different from the norm.

It comes from the Italian quaranta—for the number 40. This number became the preferred time for isolation because of its Christian significance. Forty appears in the Bible many times: the Israelites spending 40 days and 40 nights in the desert, Jesus fasting in the wilderness for 40 days. It was thought that the passing of 40 days led to purification.

Plague kept people close to home. For 16th-century residents of Florence who were hiding out from a bout of plague that halted normal life, the extent of the known world was about as big as the Duchy of Tuscany (some 9,000 square miles, about the size of New Jersey). Traveling further afield took extreme effort, bravery (to dodge bandits), and significant money. For 99 percent of the world’s population, life consisted of little more than their hometown and its surroundings. The only people who traveled farther afield were either soldiers or pilgrims.

When Giorgio Vasari—the godfather of art history and court painter to the Medici in the mid-16th century—traveled from Florence to Venice, the journey (about a three-hour drive today) was fraught with danger. You could go by horse to Padova, though the roads were regularly patrolled by bandits, which meant risking your life.

Once at Padova, a raft would escort you along the Brenta River until a vast mud bank stopped further access in the direction of Venice. The raft would be dragged by pulleys onto a wheeled carriage and then hauled, by many men straining at winches, to the mouth of the Venetian lagoon, where it could once more be used to float to one’s destination. This whole procedure took between 12 and 36 hours. A contemporary of Vasari’s was said to have spent nearly three days on this journey spanning 22 miles—and that was outside of times of plague.

The closest historical equivalents to our current situation involve not only plague but also siege. Cities under siege were subject to hoarding, which they had to stop while still preventing the attacking army from blocking supply efforts.

Some sieges lasted for years. The Siege of Philadelphia (the Byzantine city attacked by the Turks, not the home of the Phillies) stretched from 1378 to 1390 and entailed storms of arrows, diseased cows catapulted over walls as weapons, and the prospect of mass pillage and murder at any moment.

What ultimately put an end to quarantines was the development of vaccines, a modern idea with ancient roots. A process called variolation was used in China as early as the 10th century, though some sources suggest it was in practice even in the 2nd century AD. The earliest recorded examples, practiced in both China and India, involved grinding up smallpox scabs into a powder and blowing it (or inhaling it) deeply into the nostrils. The goal was the intentional infection of healthy individuals with a mild version of a disease so they could build immunity to the heavier incarnations of it. It took a very long time—about 700 years—for the rest of the world to catch on.

In 1762, British physician Edward Jenner noted that those exposed to cows seemed to be immune to smallpox. He deduced that humans who contracted cowpox, a disease in cows that is harmless to humans, developed immunity to smallpox.

Jenner gave himself smallpox by placing a single smallpox scab taken from a patient into a wound in his own skin. A week later he got symptoms of the disease, but mild ones, and they passed in a matter of days. (Still, he needed weeks to recover his strength and to cease feeling poorly.)

Smallpox remained a threat well into the 20th century, with the disease striking in 1945 throughout the United States, South America, Africa, Europe, and South Asia. During the 1950s, there were 50 million cases a year. As late as 1967, 15 million people were diagnosed with smallpox, and 2 million died in that year alone.

Now as we await a vaccine for COVID-19, we are scared, even though getting the virus is no longer the guarantor of death that it was in prior pandemics.

When plague hit the city of Ragusa in the 14th century, people had to retreat into their residences and make do. The streets were policed to make sure no one was out without permission. The poor, with no place to live, could be expelled from the city to the wilderness (ironically, that may have been the safest place to be—it put them further away from the urban rats whose fleas caused plague). Interactions were undertaken by using water as a purifier. So, shopkeepers accepted coins placed in a vessel of water, in exchange for goods.

Doctors were few in number and almost completely ineffective, as attempts to treat disease were often nearly as bad as the disease itself (leeching and lancing wounds, common medieval methods, only weakened patients and did nothing to alleviate symptoms). Bodies were burned and the stench of cremating flesh hung in the air.

As difficult as our current self-isolation might seem, it was worse before home delivery of goods, modern medicine, and online entertainment. Today, our minds can journey, even if our bodies cannot. If history teaches us anything, it is that there is much to be thankful for even in today’s Corona World.