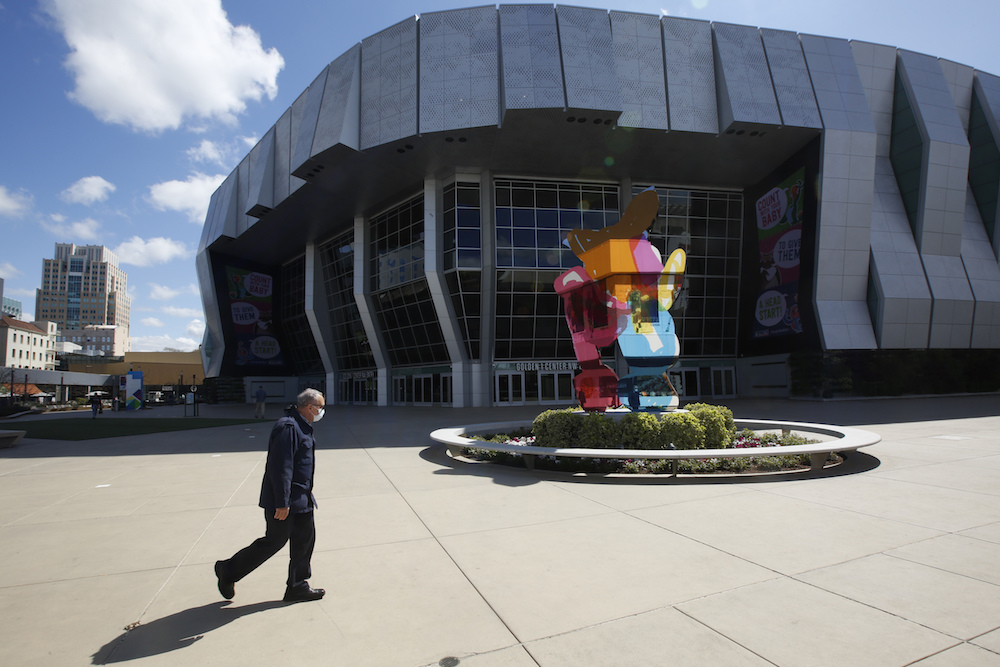 A man wearing a mask walks past “Coloring Book #4,” an $8 million Jeff Koons sculpture of a piglet that stands outside Sacramento’s Golden 1 Center. Courtesy of Rich Pedroncelli/Associated Press.

There may be no better symbol of Sacramento’s failure as California’s capital than the 18-foot-tall stainless-steel sculpture outside the city’s downtown sports arena. The work, by famed contemporary artist Jeff Koons, cost the city and the arena’s tenant, the NBA’s Sacramento Kings, $8 million. Its official name is “Coloring Book #4” but it’s really a representation of the Winnie the Pooh character Piglet.

It’s also a symbol of Sacramento’s porcine business model. As our state government hogs ever-greater authority for itself at the expense of California communities, our capital city, and its most powerful people control more of our tax dollars and more of our lives.

We are now living in the fifth decade of California’s great era of centralized power. Back in the 1970s, liberals seeking equality in local school funding and conservatives seeking local tax limits robbed California’s local governments of most of their fiscal and political power—and transferred that power to the state Capitol. In the 40 years since, the single greatest enterprise in Sacramento—pursued by governors, legislators, and political interests of various stripes—has been the ever-greater expansion of state government power.

Downtown Sacramento is a living monument to our centralized era. In response to state government’s ever-expanding power, our local governments and other interest groups had to spend more money to influence and elect Sacramento’s power players. This spending built an army of lobbyists, consultants, organizers, party officials, and media mavens, who turned once-sleepy downtown Sacramento into their campus, with office towers, restaurants, snazzy entertainment venues like the arena, and expensive baubles, including Piglet.

This army of statewide influencers also became major powers in the political life of the city—as donors, officeholders, campaign consultants, and lobbyists. Darrell Steinberg, perhaps the most accomplished state legislator of this century, is now mayor.

Understandably, such ambitious people wanted to do big things that would get noticed around the state—hence all the high-profile construction downtown. But as they made Sacramento less sleepy, they too often neglected the less glamorous tasks of meeting neighborhood needs and managing fundamental departments.

Even as schools and neighborhoods languished, Sacramento obsessively pursued showy projects to make itself a “major league” destination for tourists and conventiongoers, with particularly risky investments in Piglet’s downtown neighborhood. And now that obsession threatens the city’s future.

That neglect has long left crucial institutions in Sacramento (pop. 509,000) in bad shape. The city government has struggled in bad times (Sacramento was hit especially hard during the Great Recession) and in good (Sacramento has been especially deficient in meeting local housing demands, especially with the arrival of Bay Area refugees). The once-vital daily newspaper, the Bee, self-destructed and is now bankrupt. Even before COVID-19, the city’s largest school district was nearing collapse, with chronic mismanagement, faulty accounting, and falling enrollment putting schools at risk of—irony alert—a state takeover.

Under the shadow of COVID-19, these two Sacramento dynamics—greater statewide power, greater local failures—have accelerated. The pandemic has given the state government even more power over Californians (with individual cities now needing to wait for decisions on when to open their nail salons) while the outlook has darkened for the city.

The story of Sacramento City Unified School District is probably most damning, as it reveals an elite unwilling to face its failures honestly. For years, leading Sacramentans have ignored warnings from county education officials and even the state auditor that excessive spending—especially escalating pay and retirement benefits to teachers—was putting the whole district at risk.

Even as schools and neighborhoods languished, Sacramento obsessively pursued showy projects to make itself a “major league” destination for tourists and conventiongoers, with particularly risky investments in Piglet’s downtown neighborhood. And now that obsession threatens the city’s future.

The downtown sports arena, which opened in 2016, embodies the treat. While other California cities wisely stopped offering giveaways to the wealthy owners of pro sports franchises, Sacramento helped fund construction of the Golden 1 Center, because it wanted to keep the Kings. But because the city didn’t have the money itself, it borrowed $273 million—arguing that parking revenues would be enough to pay it back. The Bee newspaper served as chief cheerleader for this scheme.

If this was a weak financial proposition before COVID, it became even weaker with the pandemic, which shut the arena and made hardly anyone want to park downtown. Now there isn’t enough money to make bond payments.

If the city put its people first, it could re-negotiate with bondholders or simply default on the debt. But Sacramento officials have indicated that they may force their citizens to pay the price, by reducing services to cover the arena debt.

The arena scheme is hardly the only example of debt-fueled ambition run amuck. In 2018, the city sold $350 million in bonds to revive its convention center—long a loser—and to remodel a civic auditorium and a theater. Those bonds are supposed to be paid back from the city’s hotel tax revenues, which have now evaporated. City officials suggest that they could make those payments by pausing or cutting capital improvement projects.

All these failures raise questions not merely for Sacramento, but for the rest of California. Chief among them: How much longer are Californians going to put up with Sacramento making decisions about our regions and local communities when the capital city can’t even put its own people first?

Overthrowing our centralized state regime, and Sacramento’s power over us, will take popular revolt and systemic change. That might seem too heavy a lift to Californians, but as another Winnie the Pooh character, Christopher Robin, counseled, “You are braver than you believe, stronger than you seem, and smarter than you think.”

Perhaps we could start small. If we first topple Piglet, then we can overturn the California system Piglet represents.