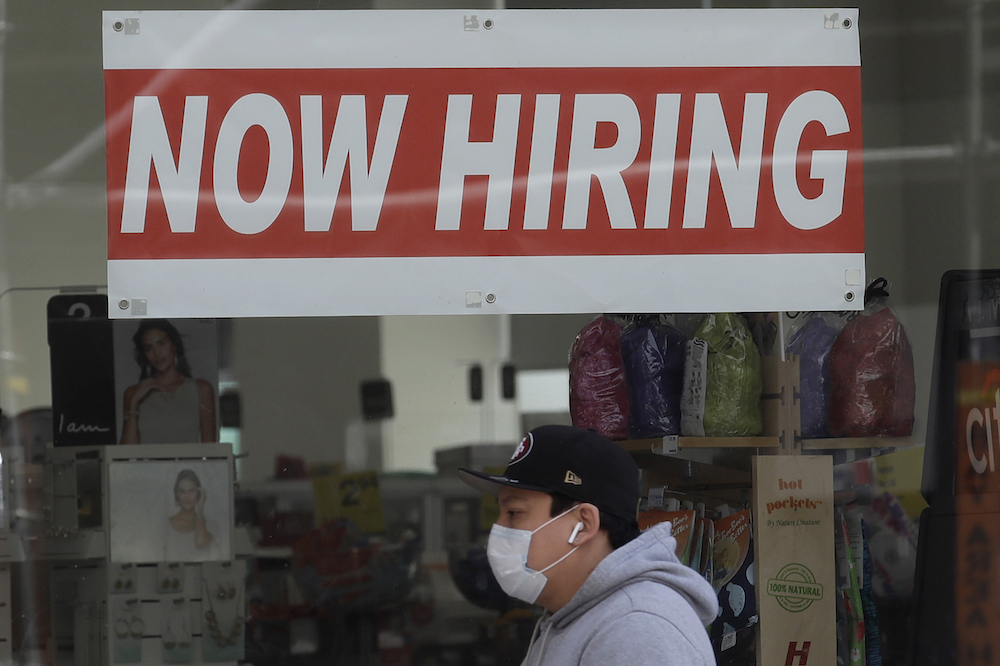 A “Now Hiring” sign at a CVS Pharmacy during the coronavirus outbreak in San Francisco. California's unemployment rate nearly tripled in April because of the economic fallout from coronavirus pandemic. Courtesy of Jeff Chiu/Associated Press.

To understand how to respond to the current predicament, Californians should turn to the front lines of employment: California’s network of 45 local workforce development boards. Though these boards are not well known, they represent the heart of the public workforce system in California. Overseen by locally appointed business and labor representatives, workforce development boards administer the bulk of the federal and state job training and placement funds in the state, totaling more than $1 billion. They interact daily with job seekers and local businesses.

Fresno’s board is one of the larger bodies, with a budget of nearly $19 million, 31 direct staff, and more than 200 contractors involved in job training and placement. It serves an area population of just under 1 million, with unemployment and poverty rates that have been well above the state average for decades. Blake Konczal, the board’s executive director since 2002, started his career during the economic downturn in 1992, providing placement services to laid-off Southern California aerospace workers. He has experience with several other downturns since then and is active in current Central Valley recovery efforts.

In my recent conversations with Konczal and other board directors, they emphasize that there is no silver bullet for recovery. Rather, their experiences with the current and previous downturns point to a series of five strategies to bring back California jobs.

The first strategy involves how Californians should start the comeback immediately: by identifying the jobs that are available and rapidly filling them. According to the latest Bureau of Labor Statistics (BLS) data, even in the midst of the worst job devastation in April 2020, approximately 400,000 separate hires occurred that month in California. That number will go up as the state economy improves (by contrast, in April 2019 that number was 650,000).

Throughout the past few months, Konczal and his staff have been in close contact with Central Valley employers. Amazon has been adding workers in the Central Valley, as have UPS, grocery store chains, logistics companies, health care providers, and security and janitorial firms. Additionally, the Board has partnered with CALFIRE, the state’s fire protection agency, to offer training in forest management and firefighting, taking advantage of job openings in these fields. The Board is also partnering with its public health system for hiring and training custodial workers in COVID-19 disinfecting practices.

Fresno County has been ahead of much of the state in lifting COVID-19 related restrictions on businesses—which has helped in job placement. The unemployment rate in Fresno went up to 16.7% in May. But this increase, of double the pre-pandemic rate, was far less than the increase in unemployment in other California counties. Konczal plans to continue his proactive job placement efforts, reaching out to employers, and utilizing virtual job fairs.

That won’t be enough, though, if employers worry that rehiring may bring liability for any COVID-19 cases among workers or customers. This leads to the second strategy: California must protect employers from lawsuits as they follow safety protocols from the county and state level to reopen.

“Businesses are confused about these rules, fearful of lawsuits brought by customers or workers who may contact COVID-19 even outside of the job, unclear on what procedures they need to put in place,” Konczal explains. In response, the Fresno Board has brought on a consulting firm to offer no-cost guidance on reopening protocols. “The high volume of calls from businesses who are asking for this guidance is well beyond what we expected,” Konczal adds.

The state legislature must also provide employers who follow the safety protocols with greater protection against COVID-19 lawsuits. Rob Lapsley, president of the California Business Roundtable, recently highlighted liability protection as one of the top priorities of his members in hastening the recovery: “Statewide, businesses, large and small, will be able to move more quickly as they can confidently follow safety protocols and not operate in fear of lawsuits.”

A pragmatic approach on liability should inform a third strategy—simplifying the rules for reopening and recognizing the tradeoffs and risks involved. The major California counties started lifting their economic lockdowns a few weeks ago, but in a hesitant manner and accompanied by complex rules that were nearly impossible to understand. Most businesses chose not to fully reopen. Things got even more complicated this week, as the state ordered retreats from reopening in 19 counties, in response to the increased rates of infections.

Retreat is the last thing needed now, and it is not justified by the data. According to state officials, the infection increases are being driven most of all by interactions outside of worksites: at social gatherings and family get-togethers. Clearly, mask and social distancing protocols must be more fully enforced in all settings. The new protocols should focus on the mask and distancing requirements, and eliminate hundreds of detailed rules on how businesses must operate under various scenarios.

There will be tradeoffs. Opening the economy more fully will lead to infections, even without the other increased social interactions. But so long as hospitals are not overwhelmed, it’s time for the balance to shift toward the economy. As the lockdowns continue, the job devastation proceeds apace. Each extra day that the lockdowns last, more jobs are lost and, more importantly, businesses decide that they can no longer hold on and close permanently.

Economic recovery will be a long road, and it will require bridges. One proven bridge—the fourth of the five strategies—involves the use of transitional jobs for unemployed workers to provide public services.  The California workforce system has utilized transitional jobs in past recoveries dating back to the public job creation in the President Jimmy Carter administration.

This month, six of the workforce boards are launching transitional job programs, using federal disaster and workforce funds to create temporary jobs cleaning up parks and recreation areas, staffing food bank distribution, and working as contact tracers. The numbers so far are small (fewer than 700 jobs statewide), but the approach could assume a greater role, depending on how quickly the recovery proceeds.

The fifth and final strategy is a cousin of the transitional job program: expediting public works projects. The California workforce system has also leaned on the speeding-up of public works in past recoveries, most notably under the American Recovery and Reinvestment Act (ARRA), or 2009 federal stimulus, during the Great Recession. ARRA projects succeeded in long-lasting infrastructure improvements, though the number of jobs created was limited and the cost per job high compared to other approaches.

Will these five strategies be enough? It’s hard to say. This is, as Konczal says, “far more severe than any of the other downturns since World War II.” Which is why it requires a mix of strong and decisive approaches, and a determination not to step back from the reopenings.