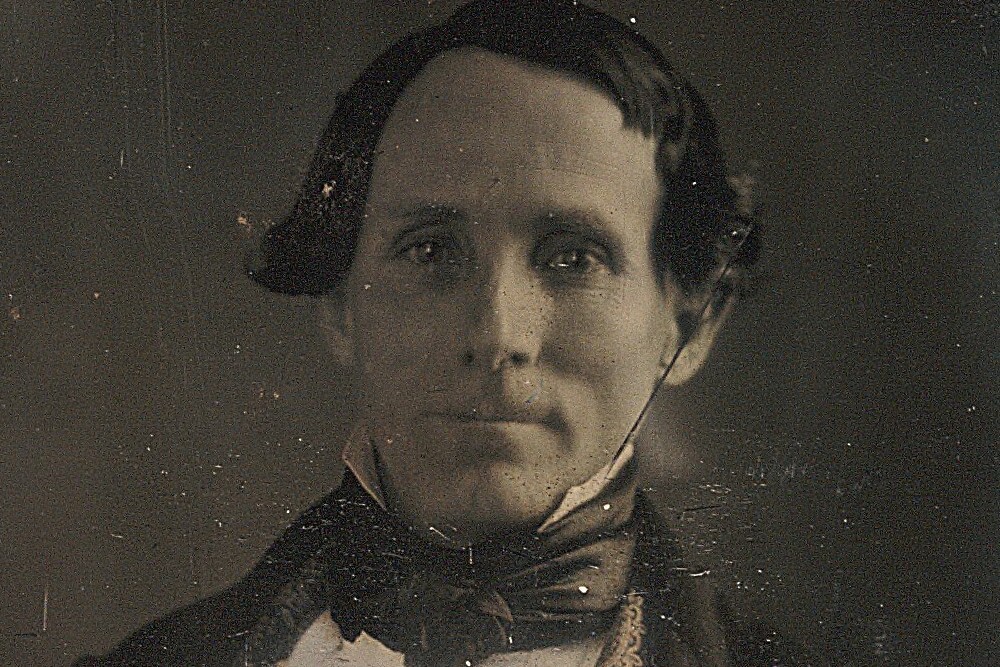 As a U.S. Senator from Mississippi, Henry Stuart Foote, photographed here in 1849, was an impassioned defender of slavery. But he remained at loggerheads with the state’s other senator, future Confederate president Jefferson Davis. Courtesy of Wikimedia Commons.

On Christmas morning, 1847, six important men assembled at a large boarding house in Washington, D.C., ostensibly for casual, after-breakfast conversation. In the parlance of the era, it was a “mixed” group, of four Southerners and two Northerners. All served in the United States Senate or the House of Representatives, and because of the climate of the times, they had much to discuss. The United States was about to win the Mexican War, and in the process wrest away from its Southern neighbor a massive tract of land, laying the foundation for American western expansion to the Pacific Ocean. Despite the end of the war being in sight, the mood in the room was far from celebratory. All present knew that the American victory was destined to give way to bitter and dangerous discussions over whether slavery would spread west as well.

Many politicians of the period avoided serious talk of sectionalism and slavery at such “mixed” gatherings, in the interest of keeping things civil. But the holiday atmosphere lent itself to informality, and the men haphazardly started proposing ideas. Some favored letting individual states and territories decide whether or not they should have slavery within their borders, while others wanted to simply draw a geographic line from the Mississippi River to the Pacific, prohibiting slavery above the line and allowing it below. The conversation grew heated—and within minutes, two of the politicians came to physical blows, their colleagues pulling them apart as they rolled around on the floor like a pair of angry schoolboys. But despite the topic of discussion, sectionalism and slavery had little to do with this fistfight. It was the physical manifestation of an already strained relationship between two politicians who should have had a lot in common: Mississippi’s U.S. senators, Henry Stuart Foote and Jefferson Davis.

In the history of American politics there have been many ugly rivalries—Andrew Jackson versus John C. Calhoun, Lyndon Johnson versus Robert Kennedy—but none was more bitter than the animus between Foote and Davis, which lasted from the 1840s until Foote’s death in 1880. The two men despised one another, and the higher they rose in political circles, the greater their hatred became. Both were ambitious political climbers, but in different ways. Foote was a street fighter, while Davis, who would later become president of the Confederacy, was calculating and somber. Foote was more publicly aggressive, never missing an opportunity to prod Davis. Davis, who was more famous, met Foote’s jabs with intimidating, withering glares and steely silence. Foote resented Davis for his natural aloofness; Davis bristled at the venomous personal barbs that punctuated Foote’s rhetoric. For Davis, the violent encounter at the Washington boarding house was an uncommon loss of self-control, a rare emotional display of barbarism from a man who was accustomed to public formality. For Foote, the fight was business as usual.

Davis was born in Kentucky in 1808 and moved with his family to Mississippi when he was a small boy. He attended the United States Military Academy and later became a successful planter. Born in 1804, Foote was a native Virginian who came to Mississippi while in his twenties. He practiced law and owned a newspaper. Both men became involved in politics during the Jacksonian period, and both were very ambitious. The genesis of their feud lay in the 1844 trial of local district court clerk John T. Mason, near Vicksburg, Mississippi. Mason was accused of killing Davis’s brother-in-law in a duel, and Foote, then a successful attorney, led his defense. His closing argument dazzled the jury, who voted to acquit, ruling that the killing was an “excusable homicide.” As was his way, Foote trumpeted his success to anyone who would listen, angering Davis and his family, who naturally felt that the killer should be punished.

Davis and Foote both entered the U.S. Senate during the late 1840s, at a time when slavery was becoming the dominant national issue. Mississippi was one of the leading cotton-producing states, and its politicians joined the rest of the South in pushing back on perceived threats to slavery posed by Northerners, creating a siege mentality that dominated daily life. During these volatile times, both Foote and Davis wanted to be the leading political voice of their state on the Senate floor, which set them on a collision course.

Both men were pro-slavery ideologues, but aside from that, they agreed on almost nothing. During the months-long, tumultuous debates that culminated in the Compromise of 1850, the last political deal over slavery between the North and the South prior to the Civil War, Foote and Davis were consistently hostile toward one another on the Senate floor. At a time when some Southerners were already talking about secession, Foote was a unionist: He took a moderate position that secession was dangerous and claimed that slavery could be protected without alienating the North, and that compromise was possible. Davis was less willing to make any sort of compromise, taking a harder line. One witness who heard them both speak later compared Davis’s “dignified and commanding, soft and persuasive” oratory to Foote’s “[f]iery torrent of fierce invective and brilliant declamation.” In heated moments, Davis labeled Foote “a Constitutional liar,” while Foote claimed that Davis “speaks only for himself, and under the promptings of his own ambition.”

Both men were pro-slavery ideologues, but aside from that, they agreed on almost nothing.

During all the turmoil, most Southern politicians, in Mississippi and beyond, rallied around Davis, whose honeyed pro-slavery oration on the Senate floor helped him emerge as one of the primary spokesmen for the South—a rational, stable presence during an angry, uncertain period. Davis’s increased national profile irritated Foote, who was also well known, but not as well respected. Foote exacted his revenge in 1851, when the two men faced each other in a contest to become Mississippi’s governor. Foote won the election, but his tenure as governor was a disaster, in part because Davis and his allies in the state worked tirelessly to undermine him. They held up legislation and funding for almost every initiative Foote advanced, and blocked his appointments to government posts.

After Foote’s term ended in 1854, he relocated to California, hoping to get a new political start. Davis likely thought that he would never have to worry about his rival again—but if so, he was sadly mistaken. Still hoping to capitalize on his name recognition in the South, Foote moved back east to Nashville, Tennessee in 1859. He arrived just in time to watch the nation come apart on the eve of the Civil War. The seceding Southern states formed the Confederacy, electing Davis as president, and Foote decided to run to represent Tennessee’s 5th District in the new Confederate Congress.

Foote’s hostility toward Davis was well known, and some political observers believed that his run for Congress was little more than a ploy to put him in position to continue his feud with the Confederate president. Foote won the race—and indeed, his tenure as a Confederate lawmaker seemed driven by his hatred for Davis. He was an instant critic, delivering verbal broadsides against the Davis administration that became more frequent and bitter as time wore on. He blamed Davis for Confederate military failures and for weaknesses in the Confederate economy, and frequently questioned his personal integrity. He called the president a despot and tyrant, and during one notable tirade, a “fiendish character responsible for more barefaced acts of corruption than any single individual has ever been known to commit in the same space and time in any part of Christendom.” (Foote admitted after the war that “not a day passed while I occupied a seat in the Confederate Congress that was not more or less signalized by my vehement opposition to Mr. Davis.”) Davis did his best to ignore the inflammatory rhetoric, but his allies did not—and tangled often with Foote on the floor of Congress, in verbal confrontations and at least two fistfights.

As the Confederacy began to crumble during the war’s latter stages, Davis became an easier target for abuse. Foote continued his rhetorical assaults on the president, and also demanded investigation after investigation of the administration’s conduct of the war. He attacked Davis’s political allies, his appointees, and anyone with whom the Confederate president was friendly. Confederate Secretary of State Judah Benjamin, who was Jewish, was a favorite target, inspiring a number of Antisemitic rants. Foote questioned the competence of Davis’s preferred generals in the field, going so far as to call Major General Thomas C. Hindman, Jr. a “fiend in human form.”

While other Confederate congressman disparaged Davis and complained about some of his decisions, few were as long-winded as Foote. Eventually, open sighs greeted Foote every time he stood up in the House chamber to speak. Newspaper reports of his tirades against Davis filtered into the North, where they were employed as propaganda, proving that the Confederate government was in disarray.

The end of the Confederacy, in 1865, did little to temper the ill will between Foote and Davis, who continued their sniping until Foote’s death in 1880. Davis lived until 1889, long enough to enjoy his own elevation to hero status throughout the South—an outcome that would have appalled Foote.

In the years immediately after the war, Davis slowly tried to rebuild his reputation, and Foote remained in Nashville practicing law. Both men also joined a battle of the books that took place in the years following the Civil War, as principal players in the conflict rushed to tell their sides of the story. Foote wrote a history of the Civil War and an ominously titled memoir, Casket of Reminiscences. Both of Foote’s books devoted a good deal of space to sharp criticism of Davis, calling him “a shameful, hypocritical and tyrannical chief executive,” and condemning “that compound of weakness, and corruption, and servility in the form of a cabinet which Mr. Davis so stupidly called around him.”

For his part, Davis privately criticized Foote for being “faithless to his trust as a representative in the Congress of the Confederate States”—but continued ignoring his rival in public. The former Confederate president also produced a massive, post-war tome, The Rise and Fall of the Confederate Government. It did not mention Foote at all.